Although this past week wasn’t the most exciting one in terms of TV news and big TV moments, there still were plenty of TV items and TV moments to fill my list. We saw dates being announced, first looks being shared, learned more details about Once Upon a Time’s musical wedding episode as well as briefly touched on The Handmaid’s Tale premiere. So here is Week in Retrospect: April 23 to 30.

Shadowhunters had been on their spring hiatus for a few weeks now, since the Shadowhunters spring finale aired on March 6. So it is about time we got something to hold us over until June 5 when the show returns. And that something was the first sneak peek of season 2B (video below), in which we finally got a glimpse of Sebastian as well as got a taste of what to expect from the second half of Shadowhunters season 2.

On the opposite spectrum, this last week ABC announced the dates for the spring finales of many of their most popular shows. For example, on May 10 you will be able to catch the season 3 finale of Black-ish. The following day The Catch will also end its season 2 run. And then Shark Tank will air its season finale on May 12. Once upon a Time two-hour finale episode is scheduled to air on May 14, with Quantico finale airing the following day. Finally, on May 16, there will be finales for shows like Marvel’s Agents of S.H.I.E.L.D., Fresh Off the Boat, The Middle, Imaginary Mary and American Housewife. And the next day Designated Survivor, Speechless, Modern Family and The Goldbergs will also air their season ender episodes.

This past week we also found out the premiere dates of two of Showtime’s most anticipated summer shows. Firstly, Ray Donovan, Showtime’s highly popular crime drama will launch its 5th and final season on Sunday, August 6. And the much-anticipated 18-episode limited run of Twin Peaks will begin on Sunday, May 21.

Once Upon a Time musical episode news

On the last Week in Retrospect, we already reported about Emma and Hook’s wedding outfits. But this past week brought us, even more, details about the OUAT musical episode. For example, now we know all the songs that the characters will belt out during the episode and who will be singing what (picture below, courtesy of TVline). On top of that, now we also know a little more about the plot of the episode, and more importantly, why is everyone singing. Basically, it is a spell which makes those who are very emotional break out into a song. Snow accidentally cast this spell once while she was pregnant with Emma, and it will resurface again on Emma’s wedding day. 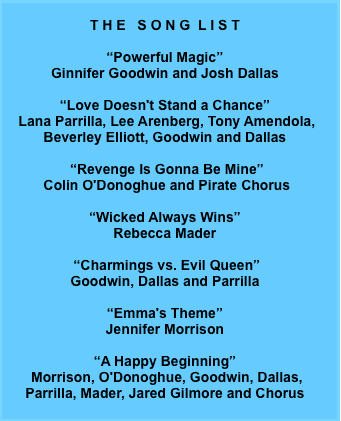 Powerless not so powerful

Sad news for all Powerless fans, the show has been pulled from the weekly NBC lineup. Powerless has been struggling in ratings since its premiere. And now NBC pulled the plug on the show by moving Superstore in the show’s previously occupied time slot. We have yet to learn when the remaining two episodes of Powerless will air. However, nevertheless, this basically means that the show is canceled with no chance of season 2. Farewell, Wayne Security!

Lately, many TV shows are making the switch from producing content for just pure entertainment to producing content that is timely and that investigates topics that are majorly relevant right now. And one of these series is also The Handmaid’s Tale, which debuted last Wednesday. The 10-episode Hulu series tells the tale of a dystopian world in which woman are back to not being able to work, read or handle money. And in a world where we are still fighting for true equality, this series hits close to home. So this weekly recap wouldn’t be complete without me mentioning The Handmaid’s Tale premiere.

Another big moment in TV, in my opinion, was the Lena-centric Supergirl episode. It not only showcased more of Lena’s backstory and Kara’s friendship with Lena but it also beautifully set up Lena being a bigger part of Supergirl season 3. On top of that Kara also got her job back as a reporter. But the moment that took the cake was Rhea approaching Lena for a possible collaboration, which might indicate that Lena will indeed get a bit darker as a character moving forward.

Lastly, another moment that comes to mind from the past week in TV was the Danny-centric Hawaii Five-0 episode. It highlighted Danny as well as showed his start in Hawaii and more importantly in the Hawaii Police Department. Additionally, it also brought everything full circle since the episode detailed Danny’s last case with HPD right before Steve recruited him for Five-0. And it was really great to see. Especially since the show is on its 7th season and will be starting it’s eight this fall.