This past week was probably one of the craziest weeks in TV ever. We had so many new in information floating around that it was hard to keep up. Shows got renewed, canceled and uncanceled (Timeless renewal). There were news on new shows and scoop on returning shows. And I also briefly recapped the Hawaii Five-0 and Once Upon A Time finales. So without further ado, here is Week in Retrospect: May 8 to May 14.

First things first, this week all of the biggest TV networks announced the shows that they are renewing. And also those shows that they are canceling. And let me tell you, it was a bloodbath. Nobody was safe, and even some of the shows that seeming were safe, got axed. Want to see the full rundown? Check out my ABC, NBC, Fox, The CW renewals, and cancellations post to find out which shows will be back next season, and which have unfortunately ended.

One of the biggest surprises that came out this week’s renewals and cancellations what the cancellation and then un-cancellation of NBC’s time-traveling drama Timeless. On Wednesday we got the news that NBC had opted not to continue Timeless. However, by Saturday the show was officially picked up for a 10-episode season 2. So it seems that Wyatt and his team will be continuing their adventures for at least ten more episodes after this shocking Timeless renewal news.

New shows on the horizon

Additionally to the drama that came with shows being axed and renewed, this past week also brought us news on the shows that were picked up by their networks for their first seasons. And that will be premiering either in the fall or midseason. We will have everything from multiple superhero dramas, to military and first-responder related shows, to a few very promising comedies. See the whole list of new TV shows to come here.

We are less than two months out from the June 30 premiere of Killjoys season 3, which means that it is about time we got some news on the show’s junior season. And this time the news came in the form of new character information and multiple new pictures. 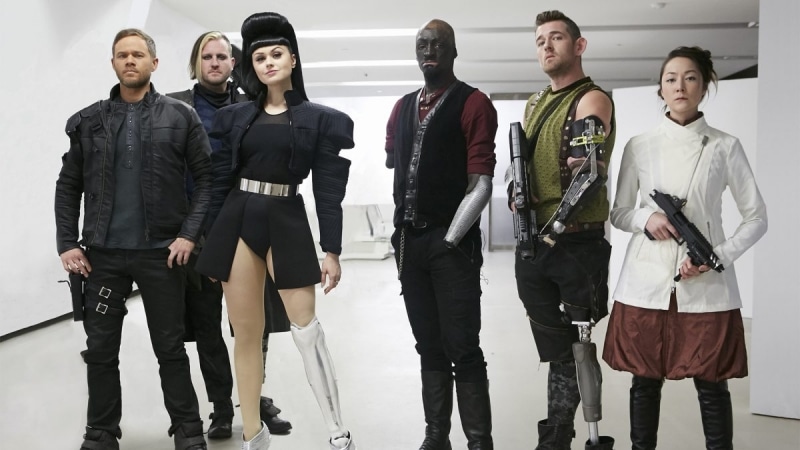 We now know that there will be a special two-episode Hackmod related event during the third season, which will feature some cool new characters. International bionic pop singer Viktoria Modesta will play Niko, a Hackmod surgeon. Emily Piggford and Tommie-Amber Pirie will take on the roles of Clara’s friends Yoki and Ollie. And Sean Fowler and Prince Amponsah will star as Hackmodding technician Cutter and Rat City Hacksaw Bar owner Havigan respectively. Do these characters sound amazing of what?

Actors exit Once Upon A Time

This past week also was sad to most long-time Once Upon A Time fans. Although we learned that Once Upon A Time got renewed for season 7, it was announced that six of the main cast members won’t be coming back next season.

We already knew that Jennifer Morrison won’t be returning as Emma Swan after she fulfills her contract and plays Emma in the season 7 premiere. But now we know that Jared Gilmore won’t be back to play Henry Mills, too, although his character’s grown-up version will be at the center of attention come OUAT season 7. Ginnifer Goodwin and Josh Dallas also won’t be back as main cast members next season. And finally, both Emilie de Ravin and Rebecca Mader have exited the show as well.

This last week Freeform’s Stitchers dropped their first promo for season 3 (video below). In the new promo, we see our Stitchers team doing what they do best: stitch into dead bodies, have some amazing banter and solve crimes. Additionally, the sneak peek also teased us Kirsten and Cameron romance. So all of you Kamsten fans out there, don’t miss the new season of the show, which premieres on June 5 at 9/8 central.

For all of my Heartland fans out there, I can officially announce that this past week Heartland officially started shooting season 11. The prep for the CBC’s hit show was going on way before that. But as of Monday, May 8, the actors are back in front of the cameras, continuing making new episodes of our favorite family drama. No news on Heartland season 11 premiere date or Heartland season 10 DVD release date yet, but once I know, you will know as well.

Lastly, this week yet another Marvel TV property got a teaser trailer. This time around Fox’s new show Marvel’s The Gifted got a promo (video below). The show tells a story about a family with two mutant children, who is on the run from authorities. And by the looks of the new trailer, this show promises a lot of action and some good old family and teenager drama.

This week I have two show finales in the important TV moments section. Firstly, there was the Hawaii Five-0 finale on Friday. It brought us an hour of intense, thriller- like car-chase. But not only, that, it also had a few pretty big cliffhangers, which makes me glad that there will be Hawaii Five-0 season 8.

The season finale revealed that Steve did get radiation poisoning from disarming the dirty bomb earlier in the season. The episode also hinted that Kono might be pregnant. And lastly, at the very end of the episode, we saw Kono flying to Nevada to try and take down the sex-trafficking ring they just busted in Hawaii. What do all of these things mean for Steve, Kono and the rest of the team? I guess we will find out when season 8 premieres.

Once Upon a Time season 6 finale

Secondly, there is no way that I can write this Week in Retrospect without raving about the Once Upon a Time season 6 finale. It was interesting, it was frustrating, it was heartfelt, it was exciting and it was ultimately one of the best season finales I have seen in a while. From the information floating around on the internet, we already knew that the finale will end the six-season-long story we all have been watching and will set up a new chapter of the show. And it did all of it effortlessly.

During the two-episode finale we got to see everything. From the bean stock Emma and Hook climbed when they first met. To The Evil Queen, who Regina sent to the Wish realm. To the final battle between Emma and Gideon. And to a beautiful montage of our character’s lives after the final battle was won and Henry’s book ended. And the cherry on top was the very last scene with grown-up Henry and his daughter Lucy knocking on his door with a fairytale book in hand.

Before the finale, I really thought that after season 6 I might be done with OUAT. But now, after seeing the set-up for season 7, I am more excited to watch the show’s new season than ever. And I can’t wait to see just where Adam and Eddy take Once.