From canceled shows and new promos. To sneak peek at Once Upon a Time season 7 Emma Swan and CBS’s Salvation as my weekly TV highlight. This is Week in Retrospect: September 4 to 10.

This past week CBS dropped a joint promo for their Friday lineup. Meaning, that the network premiered a new trailer for MacGyver season 2 and Hawaii Five-0 season 8. And the short trailer not only showcased what to expect from the first episode of MacGyver’s sophomore season. But also showed us what can we look forward to once Hawaii Five-0 comes back for their eighth season. Safe to say that Friday, September 29, when the new seasons air, just got a lot more action packed.

Amazon axis two of their shows

For any The Last Tycoon and Z: The Beginning of Everything fans out there this was a sad week because Amazon decided to cancel both of these shows. The Last Tycoon enjoyed only one season on the streaming service. While Z: The Beginning of Everything was canceled even after it was reported on April 27 that Amazon is renewing the show for a second season. I guess Amazon changed their minds, which although isn’t uncommon, is still sad.

But the above-mentioned shows weren’t the only ones that got the ax this past week because three more shows from three different networks were canceled.

First up, TNT decided not to move forward with the second season of their Shakespeare drama Will. Then a day later SyFy came out with the news that they are scrapping any plans they had for Blood Drive season 2 and canceling the show. And lastly, BBC3 also decided to cancel their Doctor Who spin-off called the Class. So if you were a fan of any of these shows, my condolences. Unfortunately, that’s just how the business of TV show making works.

New promo for Fox’s The Gifted is out

Additionally, last week Fox released a new promo clip for their new show The Gifted. Which premieres on Monday, October 2 by the way. And the new teaser is all about saving mutants and uniting to fight back. I would say that out of all the new shows that are launching this fall season, The Gifted is probably my most anticipated one. So the fact that the show is dropping so many sneaks peeks only gets me more hyped for when the show actually premieres.

Veep is officially ending after season 7

Some news from HBO. Past week the network made public the news that their highly-acclaimed show Veep will indeed be ending with the seventh season. The Emmy-winning show has already enjoyed a six season run, with their last season airing over the summer. And the seventh season of the show, which will air in 2018, will be somewhat a swan song to the series. Concluding Veep in a way that will seem final. At least this show won’t be one of the many that have been axed before allowing the shows to end on a satisfying note.

It was a sad day when we first heard that Jennifer Morrison will be back for only one Once Upon a Time episode on the show’s seventh season. However, now that we have had some time to process this, we can again be excited to see Morrison back as Emma Swan. Even it is for the last time probably ever. And we finally have a glimpse of Once Upon a Time season 7 Emma Swan via two photos that were released by EW early last week.

The first photo (article’s cover photo) we see Morrison as Emma Swan with her now husband Killian Jones aka Captain Hook looking surprised. Or maybe alarmed? But my favorite part about the photo is that Emma is holding onto Killian’s hook, hot his good arm. While the second photo (image below) shows us Emma reuniting with a grown Henry, while Killian is standing on the side, watching the two. Can the October 6 Once Upon a Time season 7 premiere and the following October 13 episode 2, which will feature Jennifer Morrison, come faster? Please? 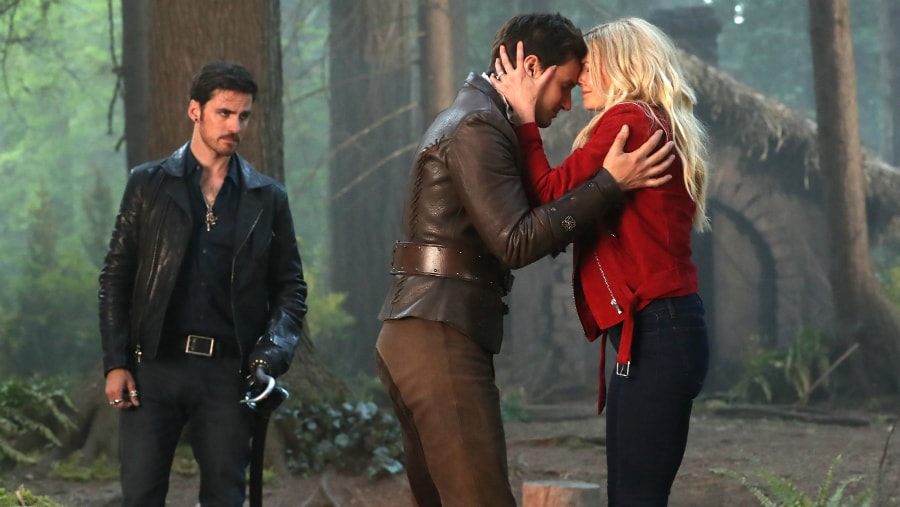 This past week might be slower in the TV world. However, that doesn’t mean that I don’t have my weekly TV highlight. Because, let’s face it, there are so many TV shows’s out there just begging you to watch them. And, sometimes, you can’t ignore this call. This time, I listened to one from CBS’s Salvation.

If you have followed my blog for a while, you will have noticed that I am quite a big fan of sci-fi and fantasy-type shows. And, although, Salvation isn’t strictly sci-fi, it has elements of it. Because it tells the tale of what if an asteroid was heading for Earth. Which provides the circumstances for everything from drama to conspiracy and some love, too, mixed in there.

So, if you like sci-fi or any type of what-if, doomsday, end of the Earth plots, then I would suggest you to check out Salvation. And bonus, the last two episodes of the show haven’t yet aired. Therefore, you can still catch up before the season 1 of the show ends on Wednesday, September 20.