Last year certainly felt like winter had come because it was a cold, cold year without little to no news on Game of Thrones favorites, no matter if you’re rooting for the Targaryens, Starks, or Lannisters. Game of Thrones undoubtedly has already become a cult classic, and the series just ended it’ s 8-season run. Years from now, those of us who spent 8 years following the show will still be marathoning all seasons every year or so. And most of us can probably already recite some of the more memorable quotes from the show already! So, let’s take a look back at some of the most unforgettable Game of Thrones quotes throughout the whole series (in no specific order of amazing, because, let’ s face it, they’re all legendary).

1. “If it weren’t for you, I never would have survived my childhood.” – Tyrion Lannister

Yes, we’re starting with the heartbreaking last interaction between the remaining lions of House Lannister. It’s some amazing insight into Jaime’s real character – even as a child he was always a good person on the inside, someone who would do anything to protect his family and those he loves.

2. “Someday, you’ll sit on the throne, and the truth will be what you make it.” – Cersei Lannister

Cersei says this little gem to her son Joffrey while he was still slated to be the next king, knowing that when you’re the ruler of a kingdom then whatever you say, goes. 8 seasons later and Cersei was still living by that rule until her bitter end.

This pretty much encompasses Tyrion’s character. Granted, he said this during one of his less intelligent ideas – freeing a starving Viserion and Rhaegel from the dungeons. But I’d argue his constant inebriation is the root of his great ideas.

4. “If you think this has a happy ending, you haven’t been paying attention.” – Ramsay Bolton

It’s the perfect line to sum up the entire Game of Thrones series. With so many characters dead, it hardly seems like a happy ending even with so many of the good guys remaining alive.

5. “I have a tender spot in my heart for cripples, bastards, and broken things.” – Tyrion Lannister 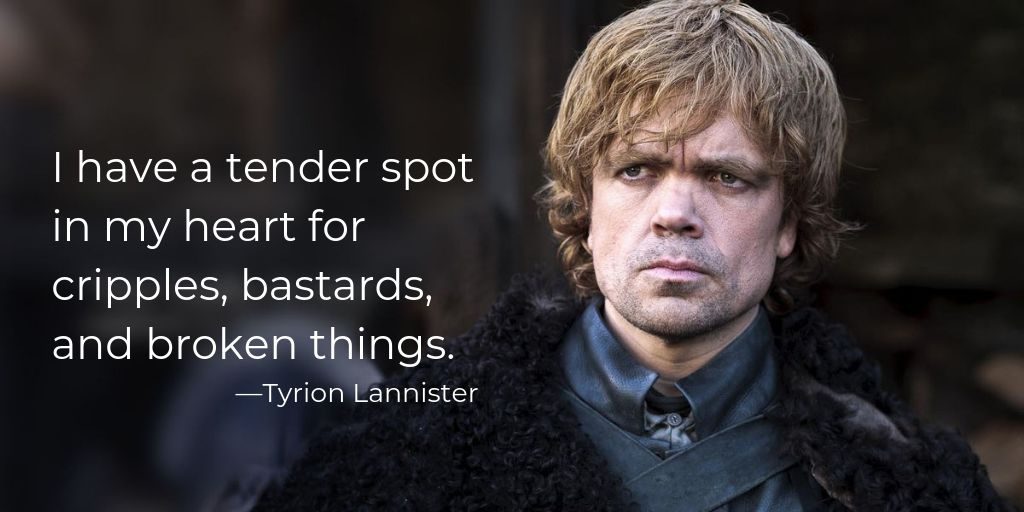 Tyrion’s strength comes from what others perceive as a weakness – him being a dwarf. And it showcases how different he is from his family. He says this to Bran in the first season and proves his worth by providing him with the schematics for a saddle so Bran can still ride his horse.

It’s always interesting when Littlefinger gets involved. Yet he died without it ever being clear what he really wanted. But this certainly tells you his life’s philosophy: take advantage of the chaos around you to climb to the top.

7. “I am Sansa Stark of Winterfell. This is my home, and you can’t frighten me.” – Sansa Stark

Sansa’s toughness came late in the show, but it’s not any less impressive. When Ramsay’s lover Miranda makes veiled threats out of jealousy, this is the line that Sansa utters. Given all she had been through until that point, it was pretty satisfying to see her finally fight back.

Dany has a bunch of amazing lines throughout the whole series, but this is probably one of the most iconic. Dany asks Missandei if she is ready to go to war, to which she replies with ‘Valar Morghulis’, which means “All men must die.” Though she agrees, she cements herself as a strong feminine character by saying this does not apply to them as women.

9. “Power resides where men believe it resides. It’s a trick; a shadow on the wall. And a very small man can cast a very large shadow.” – Lord Varys

Power is currency in Game of Thrones. And nobody knows that better than The Spider. He’s talking to Tyrion here, emphasizing that he could have mounds of power as the Hand of the King by manipulating people’s perspectives.

We all knew Arya joining the Faceless Men was building her up to something. And this was the moment that we were all waiting for – for her to finally be able to cross names off her list.

11. “When people ask you what happened here, tell them the North remembers. Tell them winter came for House Frey.” — Arya Stark 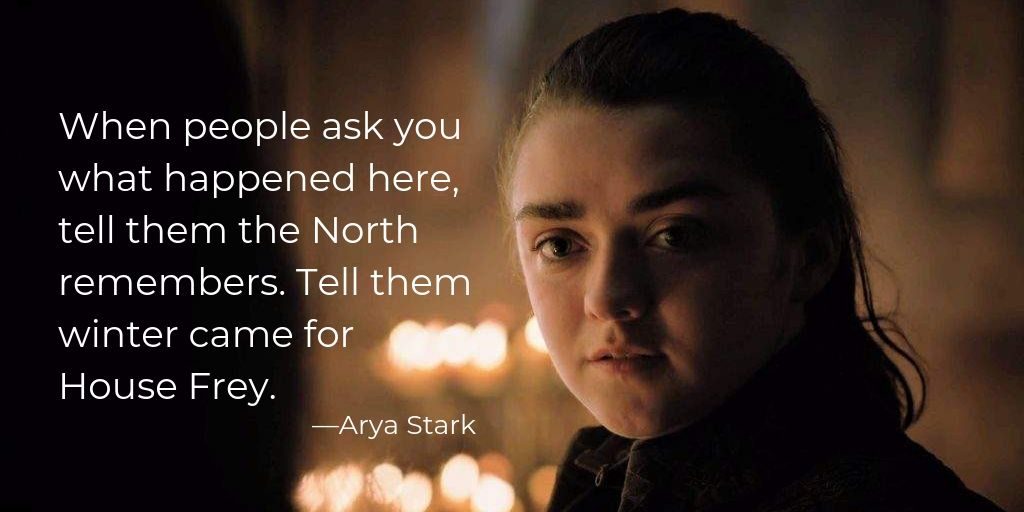 Going off on the previous quote, this was by far Arya’ s most badass moment. After dispatching all of the men in House Frey for killing her entire family at the Red Wedding, she says this bit of gold to a serving girl to make sure everyone knew not to mess with the Starks.

Cersei is a lot of things, but apparently, a whore isn’t one of them. Euron Greyjoy had to find that out the hard way when Cersei dropped the mic on him with this winner of a one-liner.

Ah, the iconic power play between Lady Olenna and Queen Cersei. It was no secret that these two powerful women hated each other, but I know jaws dropped everywhere when Lady Olenna whipped out this gem.

14. “I don’t plan on knitting by the fire while men fight for me.” — Lyanna Mormont

Yet another awesome female character gone too early. She certainly lived by these words when she stormed to fight the undead giant and was thankfully able to take him down with her. And that is why this is among the best Game of Thrones quotes.

15. “When you play the game of thrones, you win or you die.” — Cersei Lannister

Foreshadowing is a theme throughout the series, and Cersei was on point here when talking to Ned Stark. He tried to get involved in the game of thrones and wasn’t successful, ending with his head on a pike. Yikes.