Time traveling is a popular topic when it comes to all types of entertainment from books to films. But in recent years time travel has also become a popular theme in TV.

So let’s take a look at this list of the best time traveling TV shows and find out how each of them handles time travel and all the history that comes with it. 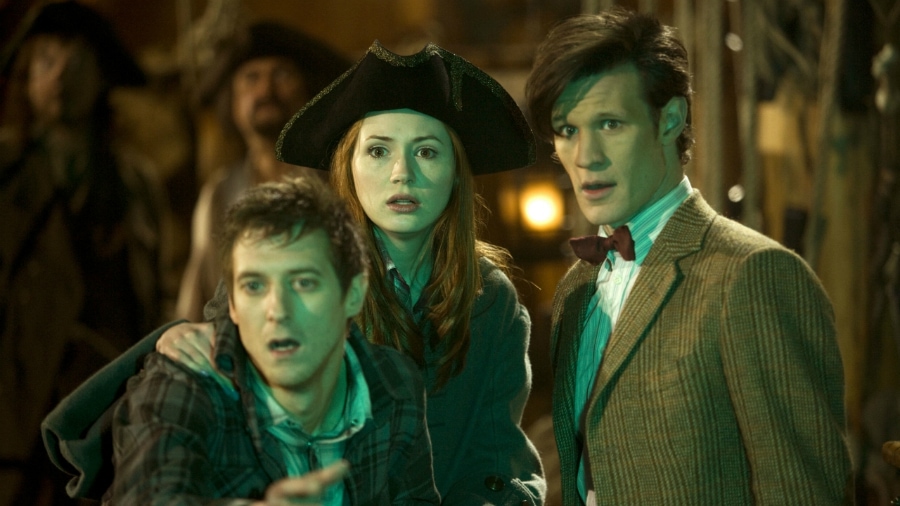 When it comes to time traveling and TV, probably the most notable name in this niche is Doctor Who, because this time travel series has been around for 12 seasons and is still going strong.

Hailing from British television channel BBC One, Doctor Who tells the tale of Time Lord aka The Doctor, and his companions as they travel to different times and try to prevent evil forces from changing history and hurting innocent lives.

Once the Time Lord gets hurt beyond healing, he can transform into a new body and continue saving the world. Hence why at this point 13 different actors have played The Doctor. With Jodie Whittaker currently serving as the Time Lord.

Doctor Who is not only a huge part of the fabric of British popular culture but by now this time travel show has found its way into the hearts of many people all over the world.

It has inspired many spin-offs in the form of TV shows, comic books, movies, novels, you name it. But more than that, by now it has become an industry-standard both when it comes to science-fiction television series and shows about time travel. No wonder that Doctor Who continues to be successful after countless actor changes and plot twists.

Where to watch Doctor Who:

Another time travel TV series that has already become a cult classic and is adored by fans all over the world is NBC’s Timeless. And despite the turmoil that this show has gone through, it still is time traveling at its best.

Starring Malcolm Barrett, Matt Lanter, and Abigail Spencer as Rufus, Wyatt, and Lucy, Timeless details the trio traveling to different times in an effort to stop their adversaries from rewriting history.

But as it later turns out, the conspiracy goes deeper than them just changing history. Since the people who our trio is chasing are traveling through time to take down a dangerous and all-powerful organization. The same one that helped build the time machine that Rufus, Wyatt, and Lucy are using.

And although Timeless went on for just two seasons (and a two-hour wrap-up movie), you should still check out the show because it’s not only entertaining but will make you think and want to know more about the events that each episode is exploring.

Where to watch Timeless: 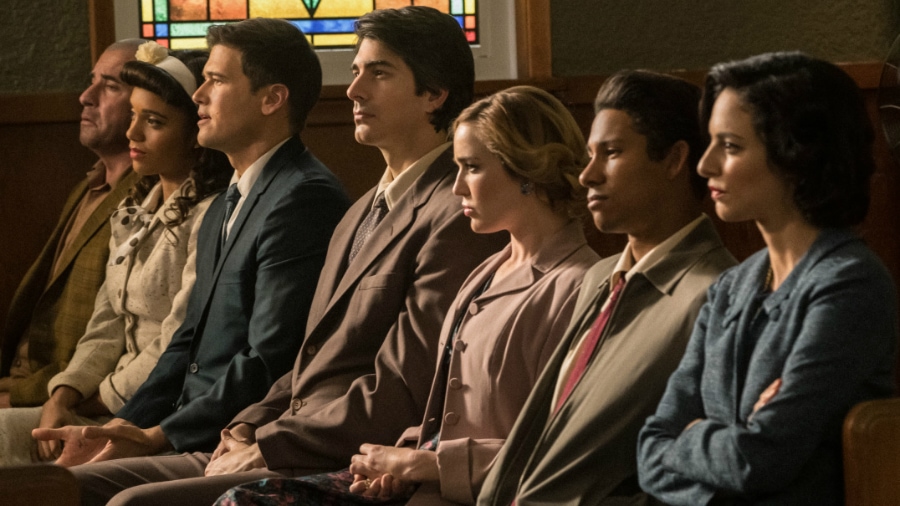 If you are a fan of superhero TV shows, then you will probably have heard about DC’s Legends of Tomorrow. It is a show that is a huge part of The CW’s Arrowverse. And has crossed over with shows like Arrow, The Flash, and Supergirl multiple times now.

And even if you don’t like the rest of the superhero series but do enjoy a good old time travel TV show, then I suggest you still give Legends of Tomorrow a watch.

The plot of this show is based around a team of superheroes that are traveling through time in their time machine christened the Waverider to prevent different catastrophes from happening. Both ones made by others and those created by the team’s previous adventures.

At the forefront, there are well-known DC heroes like Rip Hunter, Firestorm, The Atom, Kid Flash, Steel, and Vixen. Joined by some original characters like Caity Lotz’s White Canary among others.

One of the defining characteristics of Legends of Tomorrow is how fun it is. Because adjectives like unapologetic, witty, and entertaining are frequently used to describe this time travel series.

However, more than that, it adds an interesting layer to the whole Arrowverse universe. And above all, it is just a hoot to watch.

Where to watch Legends of Tomorrow: 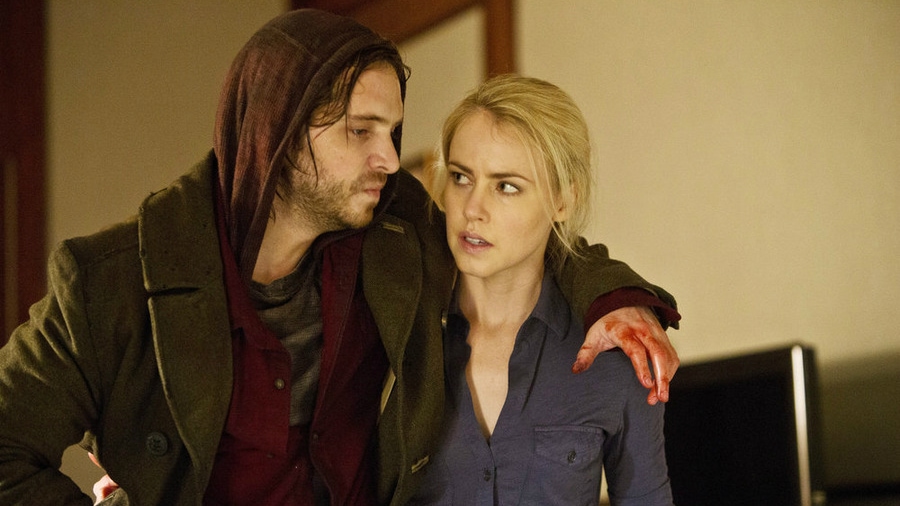 Then there also is SyFy’s 12 Monkeys, which is a little darker take on time traveling. One that comes with mystery, drama, and apocalyptic stakes. But that doesn’t lessen that how good this time travel TV series is.

Split between two timelines, 12 Monkeys centers on Aaron Stanford’s James Cole, who is tasked to travel back in time and stop the distribution of a virus that has the ability to end the human race as we know it.

In Cole’s real timeline the year is 2043 and people are struggling to survive because of the terrible mutations caused by the virus. So Cole travels back to 2015 to find virologist Cassie Railly, played by Amanda Schull, that can help him stop the release of the virus and the organization that is behind it called The Army of the 12 Monkeys.

If you think about it, the post-apocalyptic setting and time travel really do go hand in hand. Because if you can go back in time to stop history from being changed, why not go back to change it if it prevents something terrible from happening?

And that is what this show explores. Beautifully combining elements of mystery, drama, and science fiction, to form a great TV show.

Where to watch 12 Monkeys: 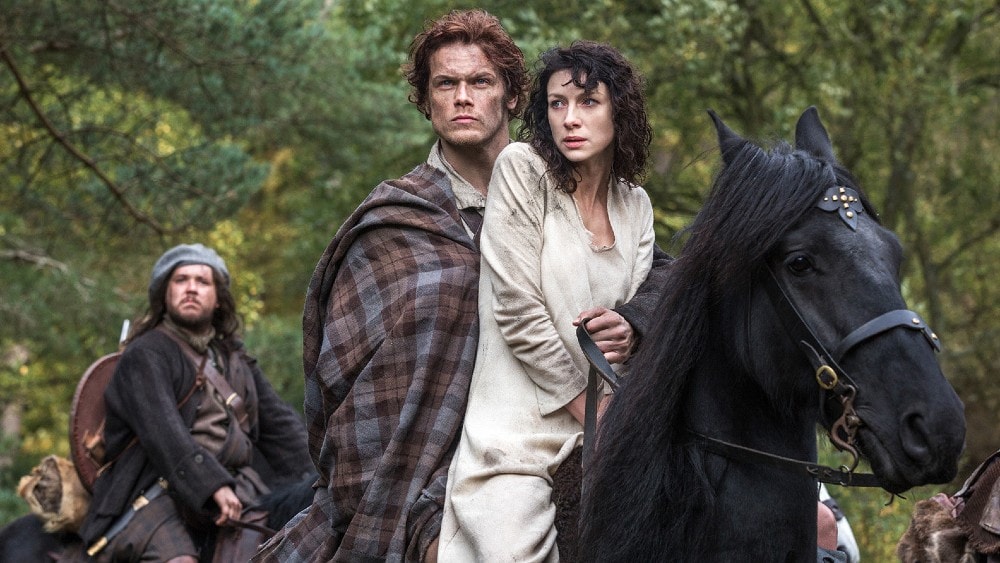 Want another show that mixes time travel with historical events and does it flawlessly? Then you should put Outlander on your must-watch TV show list!

The show starts in the 1940s when a combat nurse Claire Randall visits Inverness, Scotland as part of the second honeymoon with her husband Frank. Claire accidentally happens upon the standing stones at Craigh na Dun which transport her back in time to 1743.

To return to her own time she first has to survive 18th century Scotland. And she does so by joining a group of rebel Highlanders from Clan MacKenzie and marrying one of the Highlanders, Jamie Fraser. But eventually, she falls in love with her new husband and aids the clan in evading British redcoats that are pursuing them.

Over the five seasons of Outlander that are currently out (with the sixth coming soon), we see Claire jump back and forth between the 20th and 18th centuries and her two families as she faces two pregnancies, wars, and much more. But eventually, Claire finds her way back to Jamie.

Where to watch Outlander: 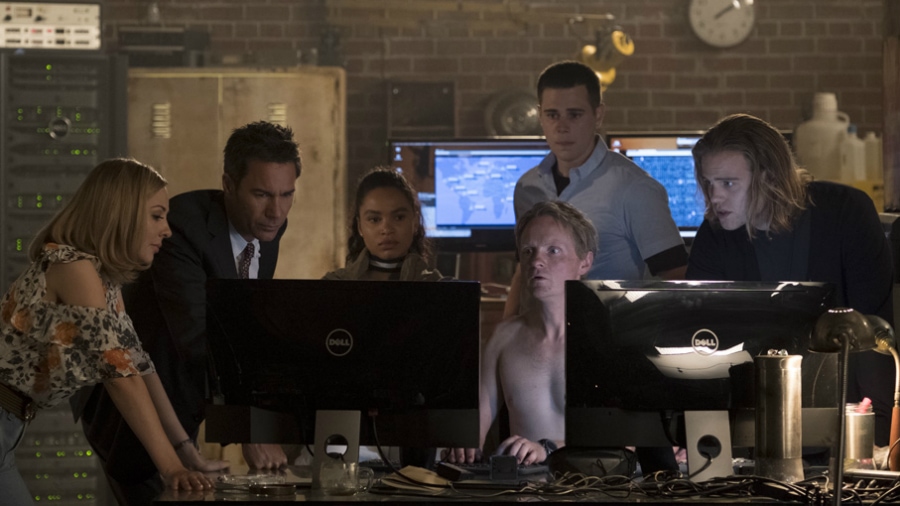 And last but not least we have Travelers. A joint venture between Netflix and Canada’s Showcase that will tick all of your time travel TV show boxes.

Set in a post-apocalyptic world, this show depicts the adventures of travelers – operatives who go back in time to prevent the collapse of society.

These travelers are transferred into bodies of our current-day humans, who otherwise would die, to blend in with twenty-first-century people. And with the help of their artificial intelligence boss from the future, travelers carry out missions in order to stop many catastrophic events from happening.

Travelers is a great mix of sci-fi and drama, features a great cast and spine-tingling storylines. So if you love all that and love a good time-travel series, then look no further than Travelers.

Where to watch Travelers: