For all of us TV show binge-watchers and movie buffs, the constant development of technology can only work in our favor. After all, it’s these technological advances that brought us streaming services like Netflix, Hulu, and Amazon Prime Video. As well as devices like the Amazon Echo and Google Home. And thanks to the aforementioned streaming services, we no longer have to wait for our favorite shows and movies to come out on DVD.

However, technology isn’t always all that helpful and, in some cases, may even ruin the entertainment experience for viewers.

That’s certainly been the recent situation for homeowners in possession of an Amazon Echo. It’s actually turned into a bit of an online debacle. With many Amazon Echo owners even venting their frustrations on the internet. Aka the best place to go for you to find out that you’re not the only one experiencing odd situations.

So, what exactly is going on with the Amazon Echo?

Well, the AI program called Alexa is so sensitive that it immediately activates as soon as it hears something even remotely similar to its programmed activation word, whether it’s the default ‘Alexa’ or any of the other wake word options: ‘Amazon’, ‘Echo’, or ‘Computer’.

Online users have reported incidents involving their own kids named Alex, Alexa, Alexis, and other similar variations. While, others have had their movie or TV show binge nights interrupted – constantly, I might add – if there’s a character named with Alexa iterations. Or if they mention computers too often.

So, in honor of this frustrating – and admittedly, slightly hilarious – technological sensation, we’re going to give you a list of TV shows you have to watch with earphones on if you own an Amazon Echo.

Now, I can’t be 100% positive about this, but it’s incredibly likely that every single episode of Modern Family’s 11 season mentions Alex Dunphy’s name at least once. If not multiple times. She is, after all, one of the show’s main characters. On top of that, you wouldn’t want your Echo reacting to every single time Alex’s mother Claire tells her what to do.

As the resident scientific smartypants, it does seem ironically apt that her name would be linked to a technological mishap. As a matter of fact, I’d bet my own Amazon Echo that if this were real life, Alex Dunphy would be able to figure out how to fix this mess.

Whether you’re streaming the reboot on Netflix or have somehow found a way to watch the 1980s original, Dynasty is definitely one to watch with your earphones on. Why? One of the show’s main characters is named Alexis, that’s why!

In the original show, she’s one of the driving forces of almost all the drama that occurs. And is also a staple throughout all 9 seasons. The Netflix reboot that premiered in 2017 is introduced in a recurring role in the first season. But has since cemented herself in a main role with the more recent second season.

If Netflix decides to stay true to the original, then your Amazon Echo’s going to be interrupting pretty much every single episode of Dynasty!

Schitt’s Creek is a Canadian sitcom that offers a view into the life of a socialite family, the Roses, that is forced to live in a small town after being defrauded and losing their fortune. Since airing in 2015, it has been debuted on Netflix and only continues to gain positive ratings after each season.

It’s definitely a show you’ll want to check out with friends and family. But make sure you mute your Amazon Echo before watching. The adult daughter of parents Johnny and Moira Rose is named – you guessed it – Alexis.

I guess you could argue that since she’s a (former) globetrotting socialite, model, and entrepreneur, it’s highly unlikely that your Echo will pick up on any of her commands. In fact, it’s probably the other way around! Still, you wouldn’t want to risk any interruptions while watching this hilarious sitcom.

Orange Is the New Black

With Orange Is the New Black, watching with your Amazon Echo on won’t be that bad. Depending on what season you’re watching, that is.

No doubt, OITNB is an awesome semi-autobiographical comedy-drama that’s been amazing throughout its previous 6 seasons. And will continue to be so throughout its recently released seventh season as well.

What we’re talking about is through which seasons you’ll want to put that Echo aside for. Here’s a hint: pretty much all of them, except maybe selectively through season 2.

That’s because of Alex Vause, the ex-girlfriend and reunited lover of the show’s protagonist (and author of the book it’s based on), Piper Kerman. Alex plays a big role in season 1 and 3-7, while she only has a recurring role in season 2.

Finally, moving on from Alexa iterations, The 100 makes the list thanks to the main character named Echo.

The good news, though, is that Echo becomes a main character in the show’s fifth season. And only has a recurring role in the earlier second, third, and fourth seasons.

That means that Echo owners and The 100 fans can sit through an entire first season without being interrupted! But maybe starting from the fifth season to the latest sixth you might want to consider changing your Echo’s wake up word to ‘Alexa’, instead.

To conclude on this Amazon Echo phenomenon

It can definitely be an incredibly annoying experience to have your shows interrupted by your Amazon Echo accidentally turning the TV off, spouting off random information, or even ordering a bunch of useless things of the internet! 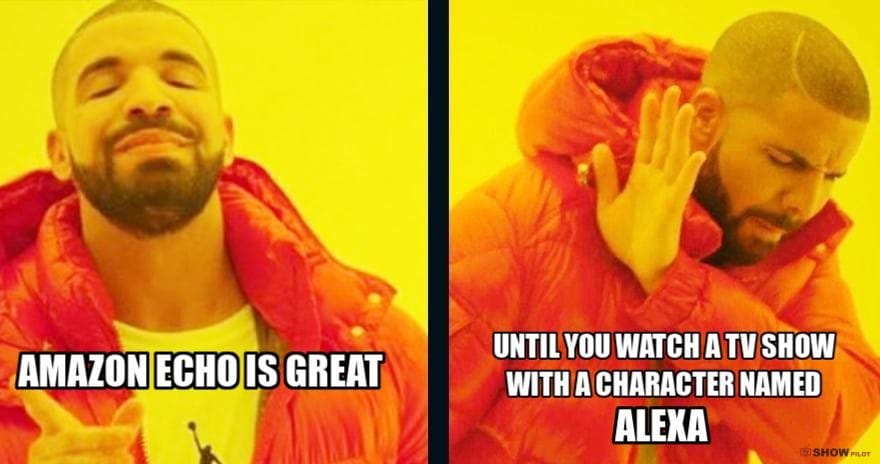 And it’s already become such a big concern that Amazon has even started to alter their commercials to mitigate setting off homeowners’ devices!

Other solutions offered by your friendly internet neighbors are to turn off the device or mute the microphone button, as long as you don’t forget to turn it back off. Or to put your device just far enough away from the TV that it isn’t ultra-sensitive, or change your wake word to whatever isn’t going to be in the show you’re watching.

Hopefully, somewhere down the road, Amazon will be able to give Echo owners the option to customize their wake words. But in the meantime, just watch the shows on this list with earphones on!