On this blog, talking about mythology and how it often leaks into the media that we consume isn’t a new thing. In fact, we’ve put together a few lists already on TV shows about Greek mythology, the Filipino mythical creatures in Netflix’s Trese, and even Ancient Rome (which, okay, is less about the gods so much as it’s about the ancient civilization itself).

In keeping with that theme, we’re moving on to another mythology that’s a little less well-known than Greek or Roman: the Norse gods.

When it comes to common knowledge, the most that the majority of us could probably say about Norse mythology is what we’ve seen in the Marvel Universe: Thor, Loki, Odin, Asgard, and maybe a few other things. How many of us knew that Thor’s hammer actually has a name (Mjöllnir, if you were wondering) in the original myths?

Well, we’ve put together a list of the best TV shows about Norse gods to add to everyone’s knowledge about mythology – and history. And hey, after watching some of these shows, a movie marathon of Marvel’s Thor franchise seems like a great idea, too! 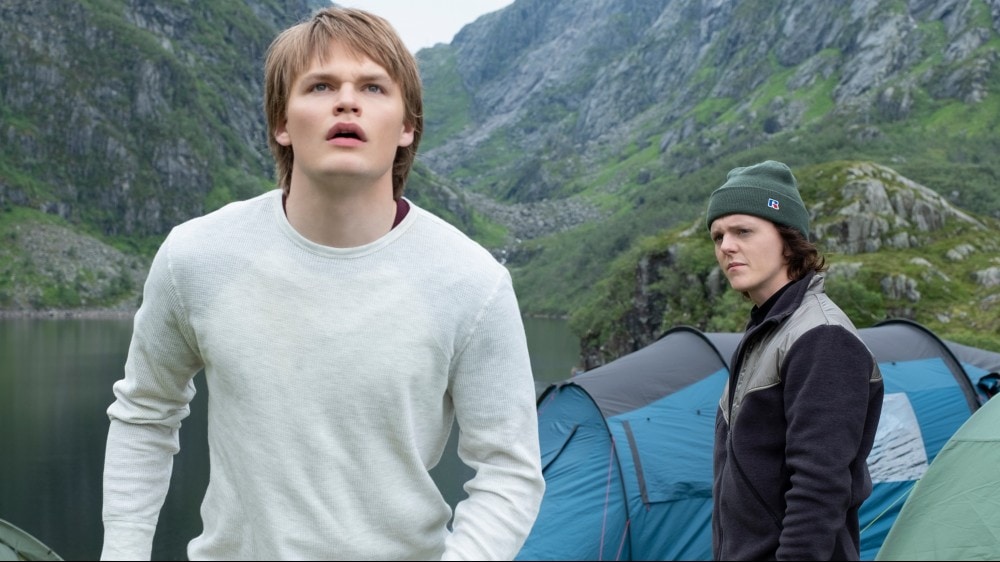 Speaking of Thor, that’s a good place to start with our first series on the list: Netflix’s Ragnarok.

The series is a Norwegian-language original and is a reimagining of Norse mythology set in modern-day Edda, a fictional town in Western Norway.

The small town has been experiencing strange phenomena relating to the weather and the source traces back to industrial pollution. The factories causing this climate change are owned by the Jutul family, who are actually Jötner in disguise – a mysterious entity from the myths.

The only one who can stop them and prevent the end of the world is Magne, a teenage boy who is the reincarnation of Thor. 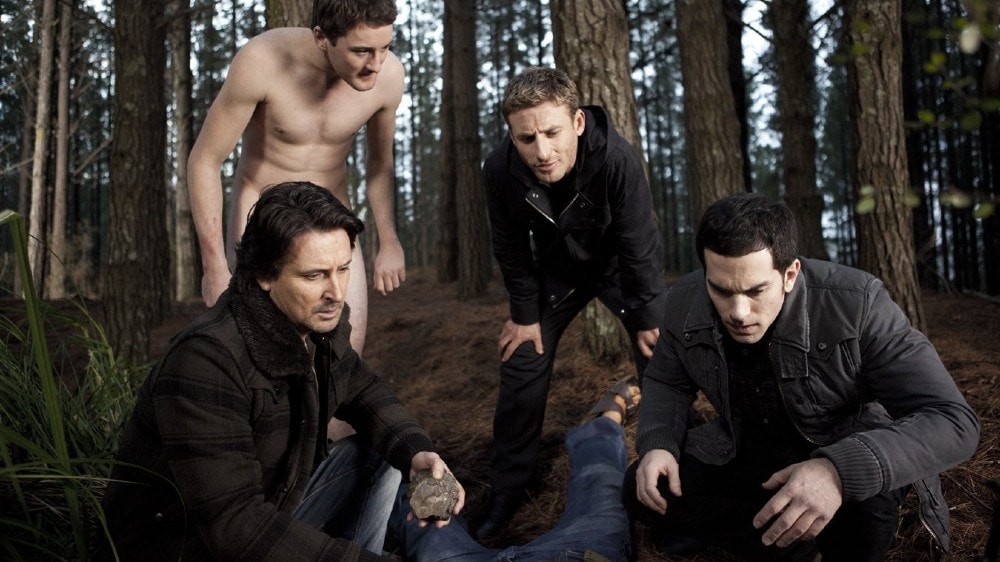 Hailing from New Zealand, The Almighty Johnsons is another series set in modern times that borrows from Norse mythology in the form of reincarnations of the gods.

21-year-old Axl Johnson discovers that he’s the reincarnation of Odin, one of the most prominent and revered gods of Norse myths, and the rest of his family are reincarnated gods as well.

However, because of the passage of time, the strength of their powers have waned. Thus, they set out on a quest to find Odin’s wife, Frigg, in order to restore their abilities – though not without hindrance from their goddess equivalents and of course, none other than Loki. 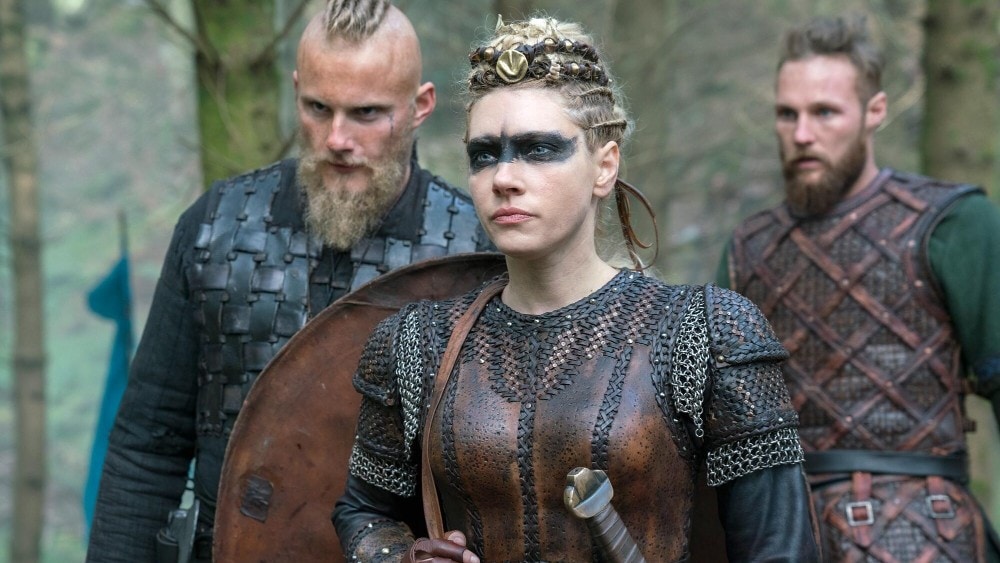 We can’t talk about Norse mythology without including the vikings, can we? These legends aren’t, strictly speaking, about supernatural gods but they’re still stories worth telling.

The story begins with his journey from being a farmer to becoming one of the most legendary Norse heroes through his successful raid of England. With the help of his family and fellow warriors, he is eventually crowned as a Scandinavian king.

In later seasons, the story continues his legacy through the exploits of his sons across Scandinavia, North America, the Mediterranean, and England. 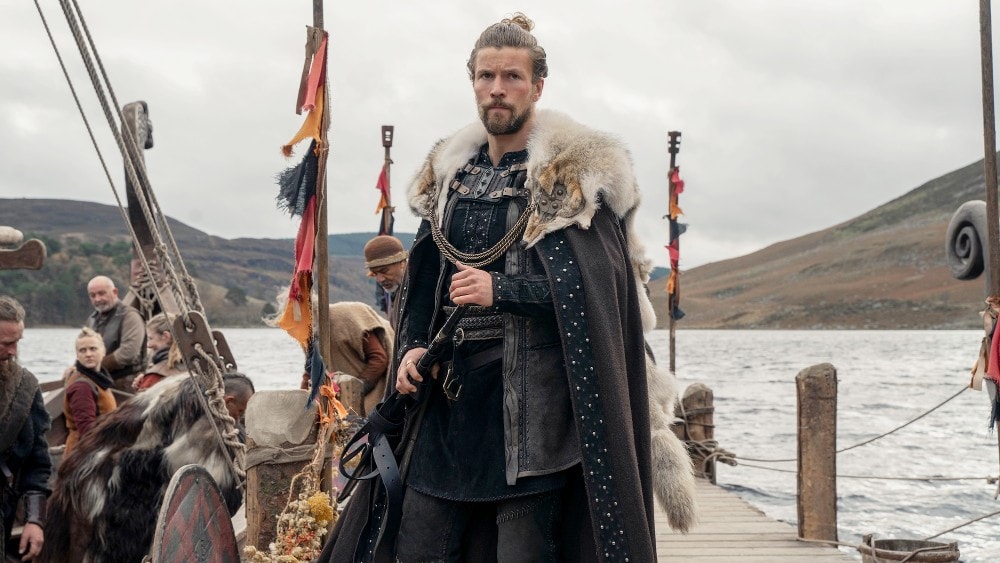 If you love the previous series on this list of best TV shows about Norse mythology, then Vikings: Valhalla, which is a sequel to History’s Vikings, is a must-watch for you!

Set a hundred years after events of the original series, Vikings: Valhalla follows Leif Erikson, Freydis Eriksdotter, Harald Hardrada, and Norman King William the Conqueror as they embark on a journey from Kattegat to England fighting for not only glory but also the survival of their people.

It’s also worth noting that Vikings: Valhalla depicts the beginning of the end of the Viking Age which in history is marked by the 1066 Battle of Stamford Bridge. 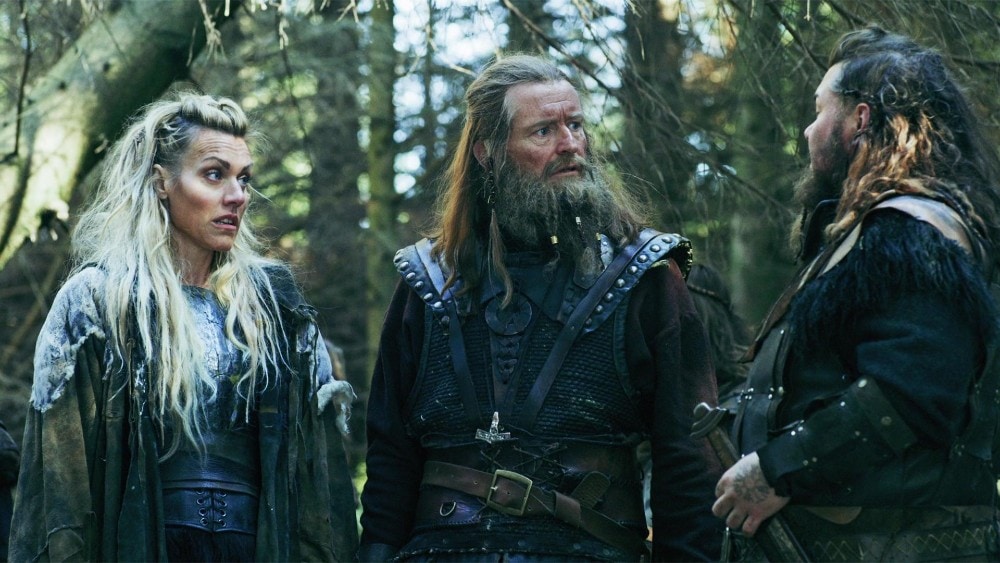 Don’t let the title or the gloomy promo art fool you: Norsemen takes the dark and brutal way of life in those times and turns it into a seamless comedy.

A Norwegian original, the show was actually filmed simultaneously in both Norwegian and English, with the English version made available on Netflix.

Norsemen takes place in eighth-century Norway and follows the story of the residents in a small village called Norheim. Various characters come into play and in between narratives of their daily lives, we get a parodied view of a viking’s life: rivalries with other tribes, pillaging, and defending their own village from the threat of modernization. 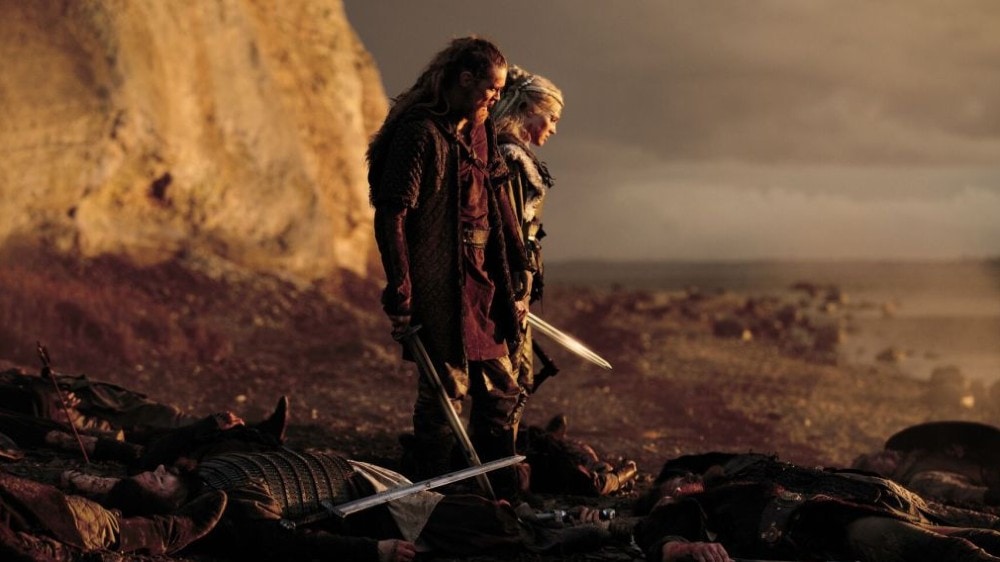 The next show on the list is another historical drama rooted in legends of an iconic figure in Dutch history: the eponymous Redbad.

Throughout this four-episode miniseries, we trace the life of the last independent ruler of the Frisian region before the Franks rose into domination.

In particular, The Legend of Redbad highlights his achievement of uniting a powerful Viking army in order to fight against the Franks and their influence with Christianity.

A year prior to the airing of this series, a Dutch film titled Redbad was released. But since the movie is two hours and forty minutes long, in 2019 it was divided into four episodes and made available as a miniseries. 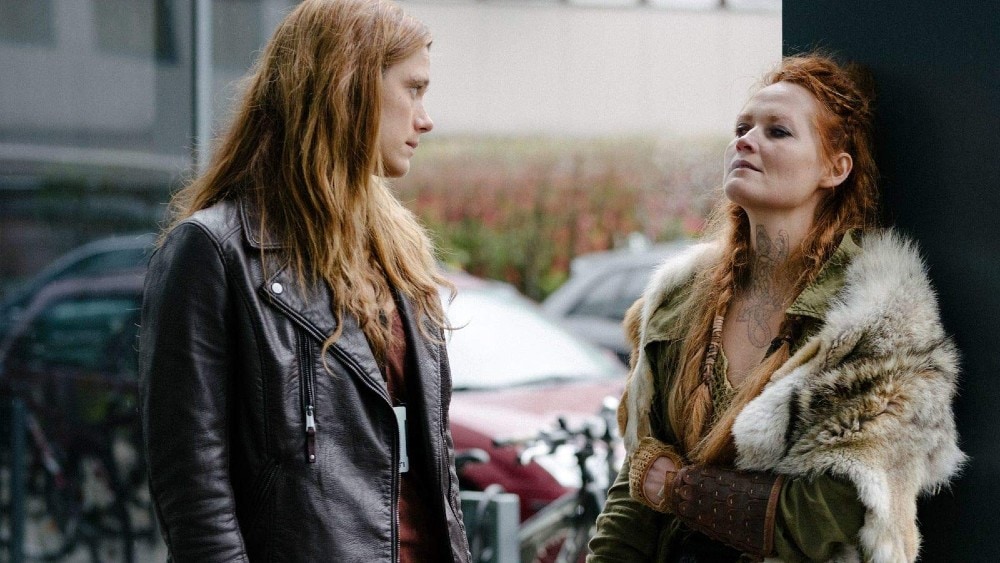 The title itself is a clever play on the premise: the appearance of people from “before” times like the Stone Age, Viking Age, and the 19th century, deemed foreigners in society as they try to fit in.

Two decades after the “time migrants” mysteriously appear, they are still struggling to find their place. When a Stone-Age woman is found dead on the beach, present-time police officer Lars Haaland and his partner, Viking-Age cop Alfhildr Enginnsdottir are put on the case – setting off a series of events that unveil more secrets on time migration. 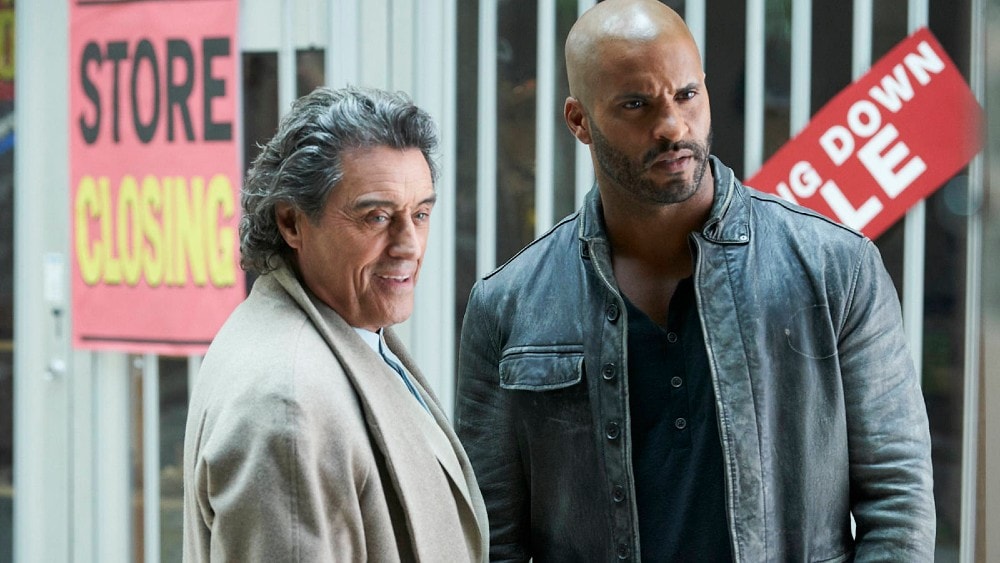 Starz’ American Gods is an absolutely fascinating series that really covers all possible grounds when it comes to mythology all over the world (contrary to the “American” part of its title).

We meet a man named Shadow Moon right at the onset, who has just been released from prison early in order to attend his wife’s funeral. He encounters a man named Mr. Wednesday, who offers him a job.

This sends him into a magical world where he’s caught in the middle of a growing conflict between the Old Gods (including those from Nordic and Slavic folklore, as well as Egyptian, Ghanaian, Hebrew, Irish, and Roman mythology among many others) and the New Gods (like Technology, Media, and Globalization). 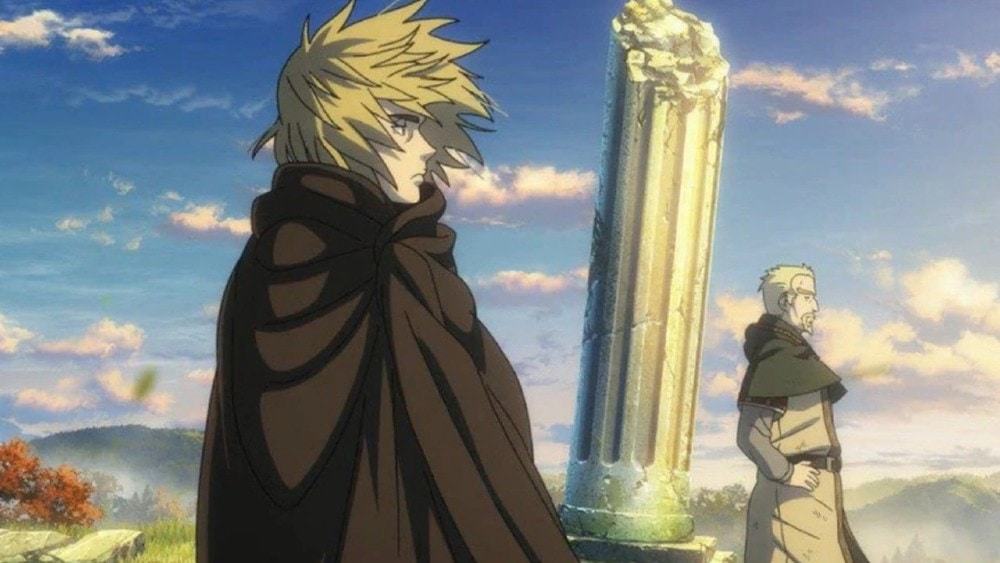 Vinland Saga is not only the first and only animated series on our list, it’s also an anime! That’s right, Vinland Saga is entirely in Japanese, yet still tells a compelling story based on Norse sagas.

Based on the Japanese historical manga of the same name, Vinland Saga is set in 11th-century England, when it was still controlled by the Danes.

The story follows King Cnut the Great’s rise to power, with a second storyline centered on a man named Thorfinn who is out for revenge against those who murdered his father.

With the first season wrapped with 24 episodes under its belt, a second season is currently in production! 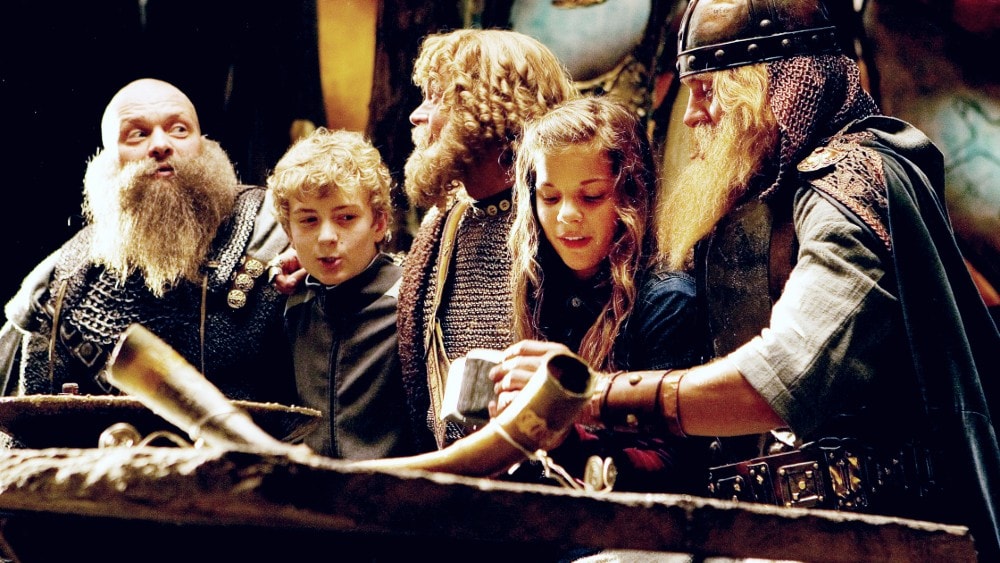 Technically, Jul i Valhal has just one season, though it re-aired every year across Danish, Norwegian, Swedish, and Finnish local networks.

As a Christmas advent calendar series, Jul i Valhal aired one episode every day from December 1st as a countdown to Christmas.

The series centered on two children named Jonas and Sofie. The two meet when they both come to live with Sofie’s grandmother and become fast friends. That’s when they meet the Norse god Loki, who has been chained within a hill and is begging to be freed.

After a turn of events, Jonas and Sofie find themselves in Asgard and on Loki’s side to help stop the onset of Ragnarok. 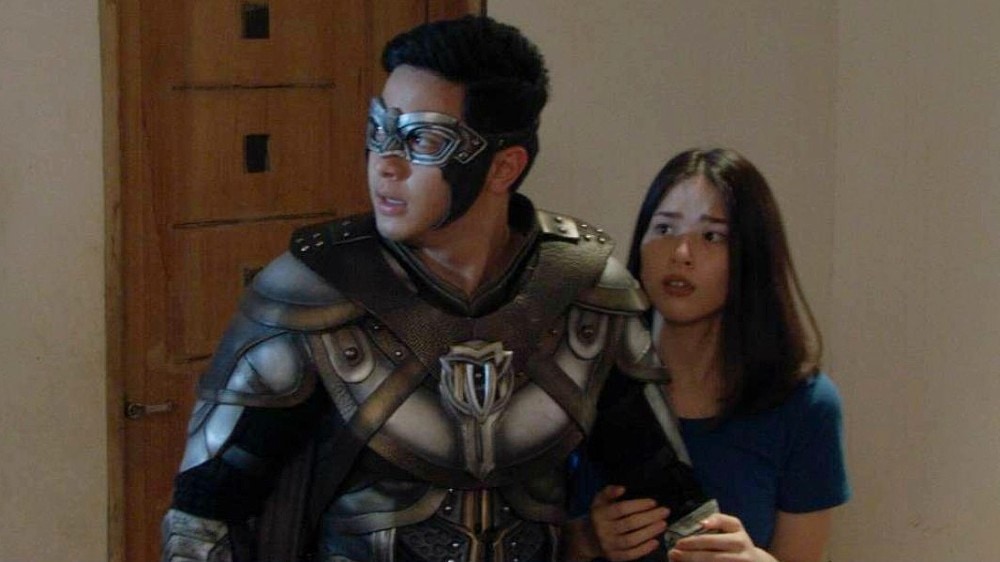 Hailing from the Philippines, Victor Magtanggol was a long-running action-drama series that was inspired by Norse mythology and was a reimagining of the legends of Thor.

Thor is on the brink of death after the Ragnarok, and he has trusted his son Magni to find someone suitable to carry the power and responsibility of his hammer, Mjöllnir.

Magni starts his search on earth, where he finds Victor Magtanggol, who is fated to wield the hammer. Victor must then learn to cope with his newfound destiny and prepare to go up against Magni’s brother Móði, who resents not being the chosen one, and the trickster god Loki. 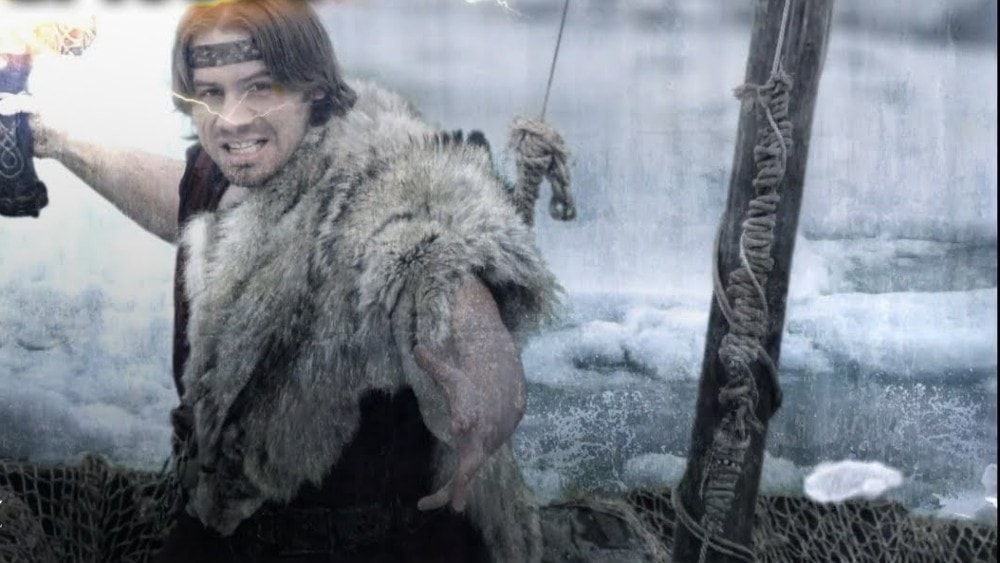 Trust the History Channel to give us a more in-depth and comprehensive look into mythology from all over the world.

With their series entitled Clash of the Gods, each episode delves into one famous mythological legend, beginning mostly with those that are more familiar from Greek myths like Hercules, Medusa, Zeus, Odysseus, and even the Minotaur.

In the latter episodes, Clash of the Gods also introduces us to the Norse legend of Beowulf, one of their legendary heroes, as well as Thor’s rivalry with the Midgard serpent.

As a bonus for Lord of the Rings fans, there’s also an episode that dives into the legends that inspired the novels! 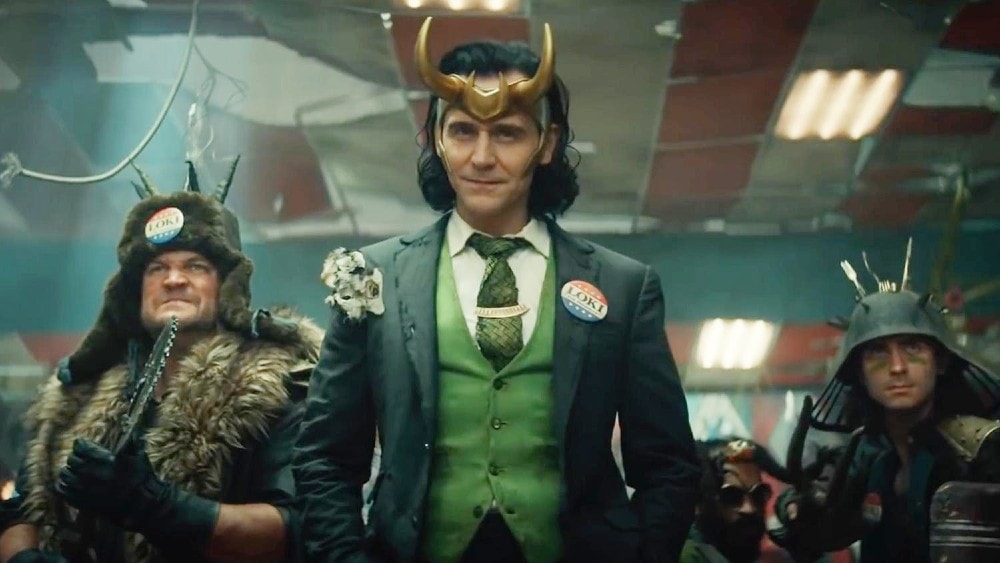 Last but definitely not least, we couldn’t leave out Disney+’s contribution to the fourth phase of the Marvel Cinematic Universe: Loki.

If you watched the entire franchise up to the film Avengers: Endgame, you’re probably wondering how Loki’s character has his own series after, erm, what happened (no spoilers here!).

Well, this Loki is an alternate “time-variant” version of him whose timeline begins in 2012. Because of that, his character is back to his pre-reformed days having just stolen the Tesseract.

When he decides to help the authorities with stopping a greater threat to the world, we’re able to see how Loki explores more of his own powers in shapeshifting and telekinesis.