And just like that, the first season of the long-awaited reboot of Sex and the City (SATC) has wrapped.

Being raised to the story (from a rather inappropriate age), I was thrilled to hear this was happening. It did take longer than I prefer, but the reboot finally came.

The internet had plenty of opinions, some of which found me before the series did.

And now, after ten episodes of crying, laughing, and cringing, I came to a conclusion it wasn’t quite what I had expected, but it was something I rather enjoyed.

Aged but not changed – with new struggles

The storyline is set 20 or so years after the original series ended.

Charlotte is still happily married, so is Carrie, and Miranda is just married. Kids are almost grown, busy living their own lives, with whatever consequences that comes with.

I think one of the most challenging parts of the series was a realistic portrayal of the main characters, given the time that had passed, and the circumstances.

Somehow they nailed it. Just like they nailed choosing the challenges faced in And Just Like That… to fit each woman’s personality and character arc.

The former sex columnist, back in the day was very open-minded and had no shame discussing the subject.

Now she has a podcast, where the team keeps challenging her to be… less of a prude (maybe not in such harsh words, but you get the general vibe). 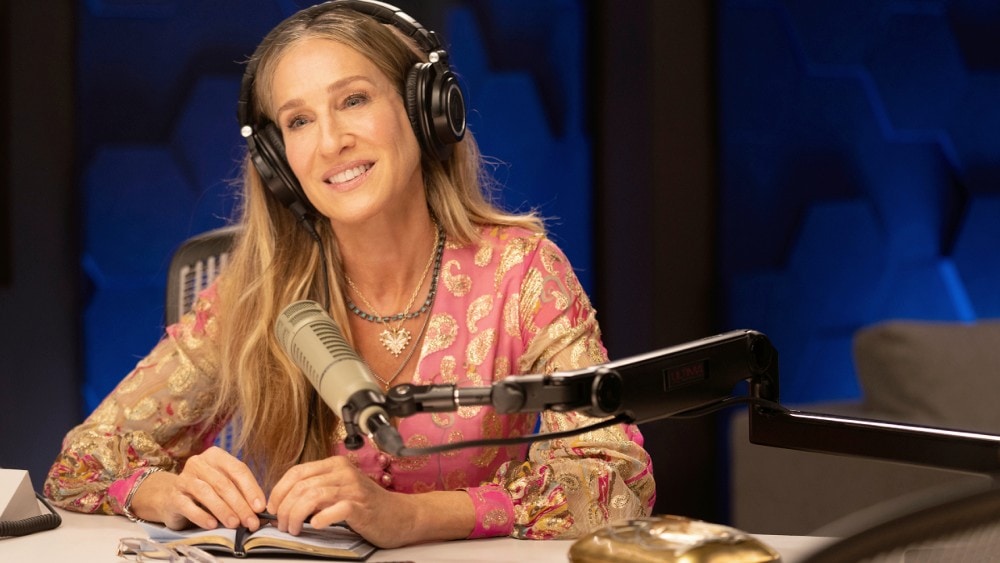 As the original SATC ended, Carrie got her happily ever after with Big, who was always her endgame, from the first episode to the very last one.

Naturally, with her life being whole, this had to be ripped away. But death is a natural part of life, something that happens, so we got to watch her navigate the grief, tie up loose ends, and look for ways to start her life again.

Including learning to date again.

Luckily for her, she wasn’t alone, she had her old friends (and, much like Miranda back in the movie, Charlotte was guilt-tripping herself over something that wasn’t her fault) and a brand new one, someone just as stylish!

Used to stand against inequality, now is put in a situation where she appears to be a problematic Karen.

She doesn’t mean to, and she really isn’t. Yet, the world has changed a lot, and what was once a very woke mindset, is now considered the baseline. Miranda struggles not even with compassion and understanding but rather with not knowing how to word herself correctly.

One such great example being the first episode, when she goes to school, which was a moment of actual secondhand embarrassment for me, watching her say all the wrong things, and then, just as she tries to explain herself, just digging herself into an even deeper hole.

And that very moment I immediately knew several women who could have gotten themselves into the same situation under the same circumstances. I felt sorry for Miranda.

And then throughout all that, she found a new friend, her professor, who was going through her own problems. The simple act of human communication did the magic once again.

As the season went on, Miranda fell in love with a non-binary person, which to her was confusing, forcing her to reevaluate many things in life. 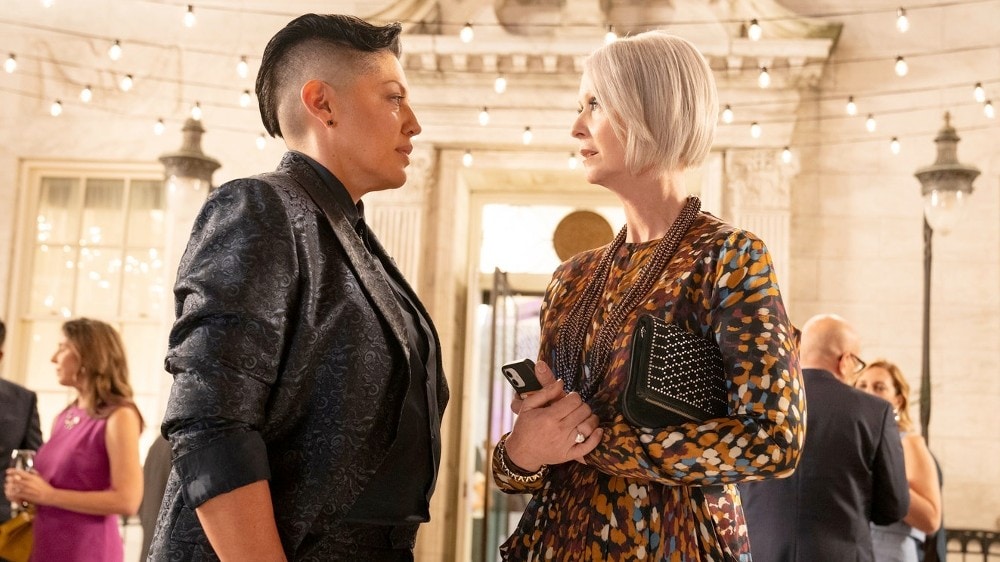 Her son being grown (and doing grown things), alcoholism, a boring marriage. Somehow it all made sense for the character.

Charlotte was always the perfect one. If OCD was a person, that’s what it would look like.

Charlotte took joy in planning things out and seeing them go exactly perfectly. She wanted to live in a fairy tale and was never any good at settling with less.

The reboot gave her a life that was largely exactly that. And, honestly, I loved it for her!

That is, until her child came out as not-a-girl.

Which wasn’t a bad thing for Charlotte, but it was very confusing. Charlotte, who always took pride in preparing every single detail, got rear-ended with something huge she hadn’t expected.

It was her journey to understanding how to communicate with Rock (formerly Lily) in the most loving and compassionate way. 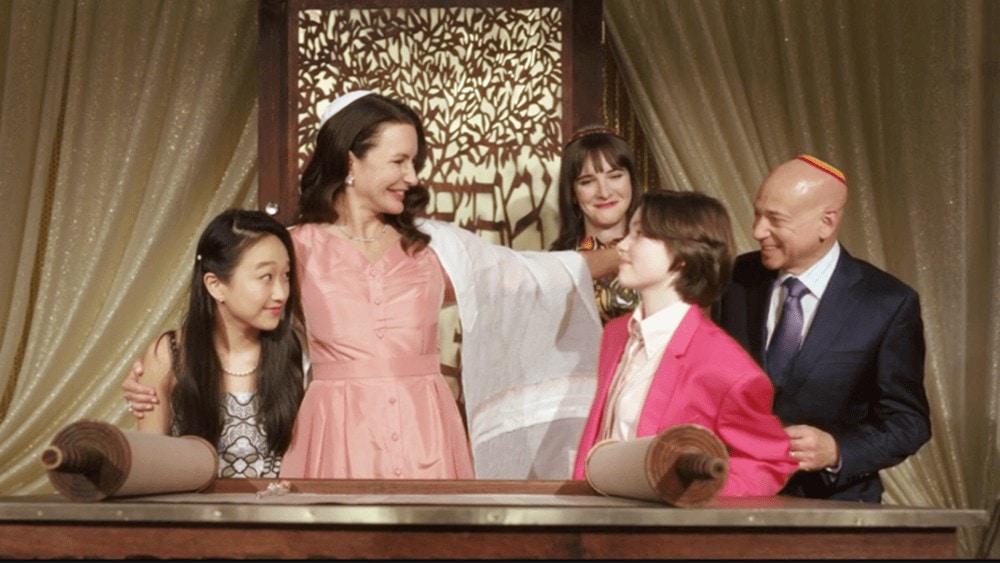 Charlotte too found a friend much like her. Someone who lived the perfect life, and shared the same values.

Shoutout to the older audiences

This will be a rather unpopular opinion but I genuinely don’t think the reboot had Gen Z or younger Millennials as their target audience. And perhaps that’s why TikTok was filled with rants about lack of relatability, and how the show was nothing like Sex and the City.

And it’s true, this one was very different.

But the thing is, so is life two decades later.

The main story wasn’t set on recreating SATC but rather showing how the lives of these women have evolved. It would be absurd to expect boys, sex, and dating to be the focus of their lives now.

Instead, it’s their kids growing up, the quality of their marriages, social circles, ageism in society, and so on.

It can be a little unrelatable to teens and twenty-somethings (which I say knowing I also belong within the category). But it can be a great learning experience and empathy training to understand why sometimes older generations can act a certain way, as well as the fact that age is just a number when it comes to getting a grip on your life.

There will always be new challenges. The world is changing, and changing with it can sometimes be hard, no matter how open-minded you are.

A great change was each of the girls finding a new friend of their own.

No matter what happened during SATC, they always had each other, despite their differences. And that was beautiful!

And Just Like That… took a different route, giving each of the girls a great friend individually, someone they had something in common with. A sign of emotional independence, in a way, showing they have grown into their own people.

The lack of Samantha. There, I said it.

I missed the audacity that came with her, the confidence, and her sex-positive attitude.

Being the oldest of the squad, she could have added a lot by showing that even another two decades did nothing to lessen her sexuality, fierceness, and self-love.

Arguably, Samantha would have probably been the only character who could bring value by being the same exact person, with no need to catch up with time.

Then again, the show did great filling the gaps and making the lackings as little noticeable as possible.

Also, while I did miss the character, I’d rather deal with it than see the actress work in an environment she personally does not enjoy. So that’s what I kept reminding myself every now and then.

Something I didn’t hate but felt weird about was Miranda’s decision to leave for LA.

For someone like Miranda, who always worked hard for her success and who was an independent woman, it didn’t seem natural to see her blow all that away for a lover.

Then again, that was exactly the point, following her heart for once.

She even said it herself, that she’s tired of being the Miranda everyone expects. And this was just it. Very unlike Miranda.

But the Miranda-like stuff got her depressed, so I applaud her bravery. Good for her!

At the time of writing this article, there is no confirmation of season 2 happening.

As for my personal opinion, the first season was finished with this possibility in mind, there’s little doubt. Especially the Miranda leaving part.

We’ll see whether or not it happens. But I sure hope it does.

I’m curious to see where these new lives would lead the friends. And I’m extra curious to see that date between Carrie and Samantha (though, I won’t be holding my breath for the last part)!

UPDATE! As predicted, HBO Max just renewed And Just Like That… for season 2!