We all know at least one fairy tale whether from a Disney movie, a book our parents read to us before bed as kids, or – if you’re a giant nerdy bookworm like me – from our own readings of the Grimm brothers’ and Hans Christian Andersen’s complete works as an adult. I mean, I firmly believe that whether a child or an adult, we all need a little of the fantasy and imagination of fairy tales in our lives.

Thankfully, it’s not just cartoons that tell fairy tales these days. Some TV shows have exercised the limits of creativity in reimagining the classic fairy tales to suit modern realities and the more mature thinking of its target audience.

So if you’re looking to inject some magic, fantasy, and even some supernatural into your TV entertainment routine, be sure to check out these shows! 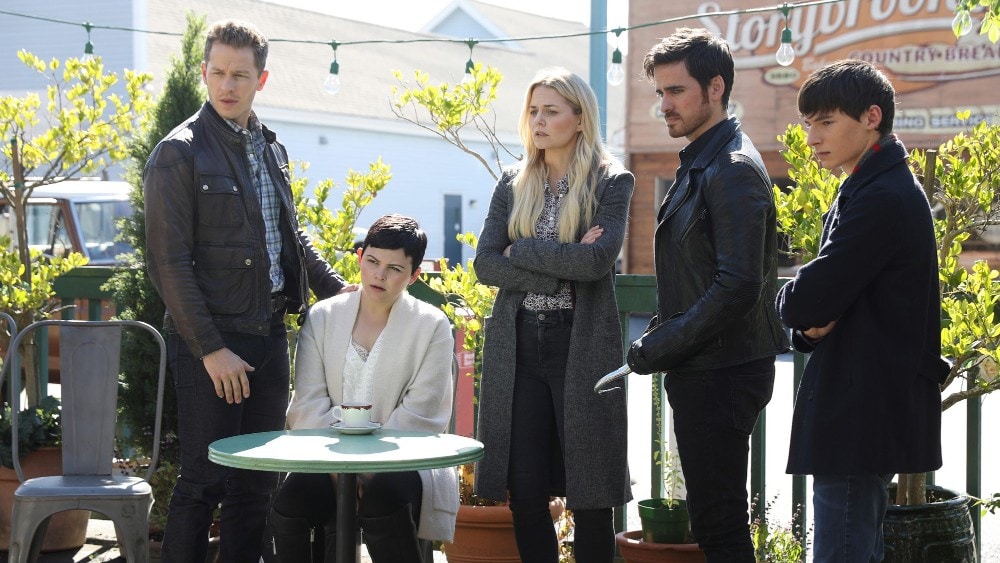 “Once upon a time, …” is how almost every single fairy tale that we know starts, making it the best possible title for a TV show chock full of magical references! ABC’s Once Upon a Time is an absolute classic when it comes to the creative use of fairy tales as a basis for its characters. Yes, the show is less about modern retellings of the stories we know and instead, features a GIANT pool of these stories’ characters.

From Snow White to Captain Hook, Rumplestiltskin to Rapunzel, Wicked Witch to Evil Queen, and even more recent favorites like Elsa and Mother Gothel – Once Upon a Time has it all.

Set in the fictional town of Storybrooke in Maine, its residents are primarily ageless fairy tale characters who have had their memories erased by the Evil Queen. The protagonist, Emma Swan, is the only one who can break the curse and save them all. 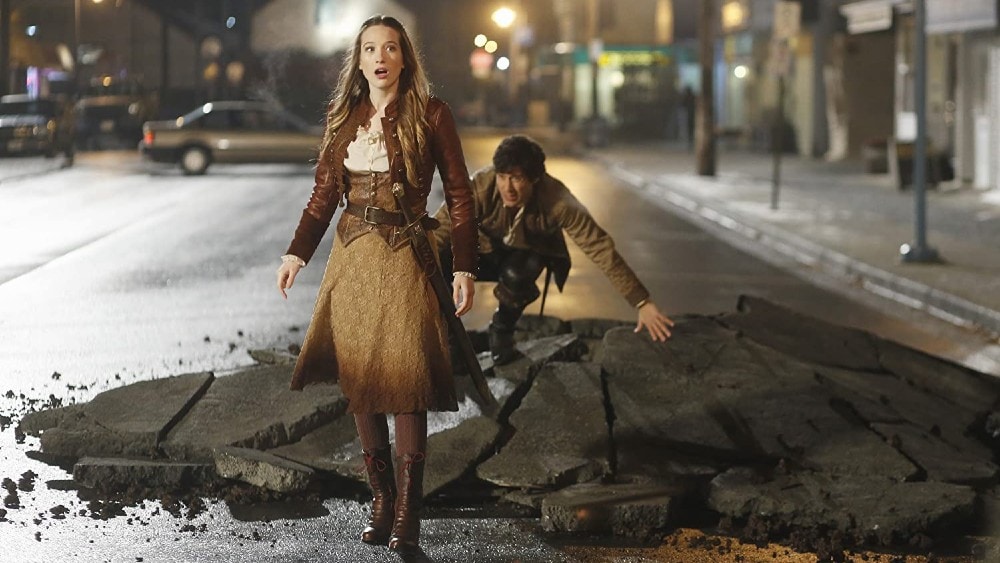 From the title itself, Once Upon a Time in Wonderland is a direct spin-off from the previously mentioned show on our list of the best fairy tale TV series. In the parent series, Wonderland served as one of the expanded settings and then became the primary realm for this spin-off.

ABC’s Once Upon a Time in Wonderland ventures off on its own story featuring many beloved characters from Lewis Carroll’s novels titled Alice’s Adventures in Wonderland and Through the Looking-Glass: namely Alice, the White Rabbit, the Cheshire Cat, the twins Tweedledum and Tweedledee, the Queen of Hearts, and even the Caterpillar.

Alice experiences heartbreak with the supposed death of her true love and leaves Wonderland, only to be placed in an asylum. However, not all is as it seems as she’s brought back to fight against the various dangers of Wonderland and find a way to save her love. 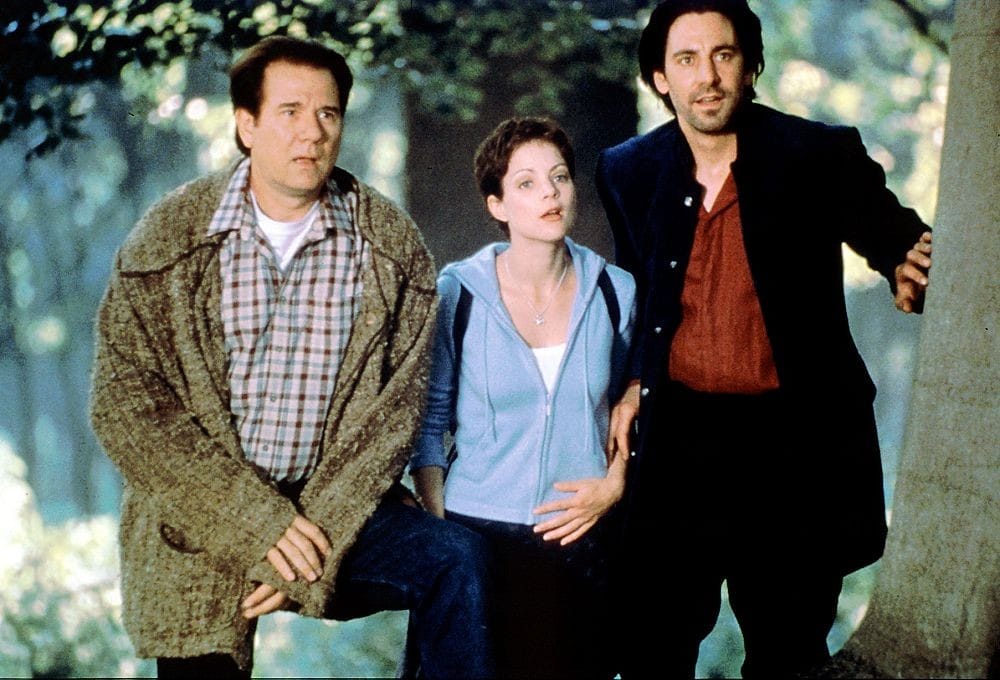 If you like the mishmash of fairy tale characters that you can see on Once Upon a Time then you will also like The 10th Kingdom, a miniseries from Hallmark Entertainment.

The story starts in the nine kingdoms where the Evil Queen frees a half-wolf prisoner from the Snow White Memorial Prison and asks him to go to New York City (aka the tenth kingdom) and find Snow White’s grandson Prince Wendell, who was turned into a dog and accidentally went through the magic mirror portal.

But while in New York City Wolf falls in love with a headstrong waitress named Virginia. And together with her father Tony, the trio goes back to the nine kingdoms to help save the realm and all the fairy tale characters that inhabit it from the rule of the Evil Queen. 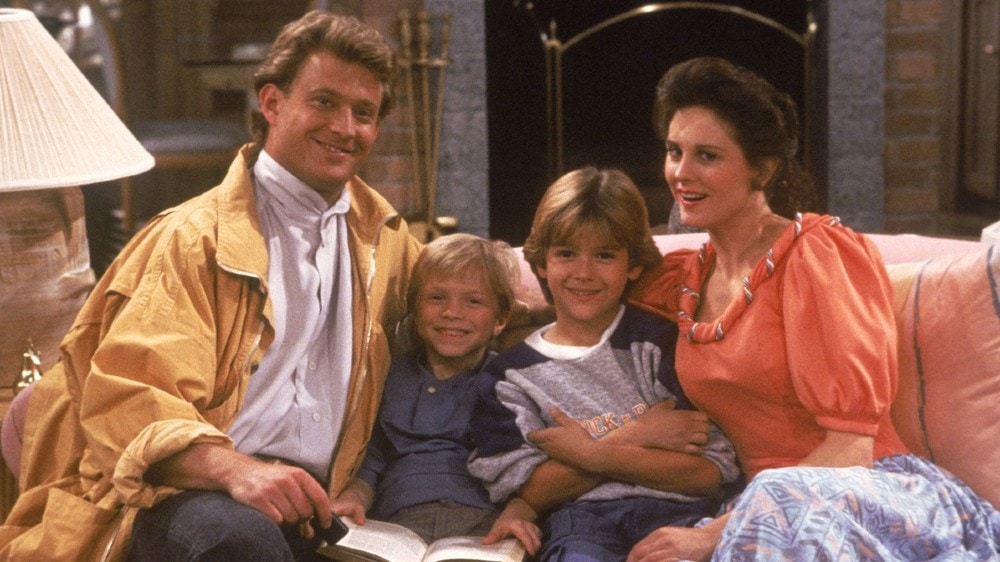 Before Edward Kitsis and Adam Horowitz dreamed up Once Upon a Time for ABC, the network had another fairytale-inspired series back in the late 1980s.

Titled The Charmings, the show, as you might deduct from its title, centers on Snow White and Prince Charming who get magically transported to 80s Burbank.

Now the two fairy tale characters have to adapt to living in California in the 20th-century. Which includes getting a job, raising kids, and being your typical suburban family. All while the wicked stepmother is watching them through a Magic Mirror located in the second story of their home. 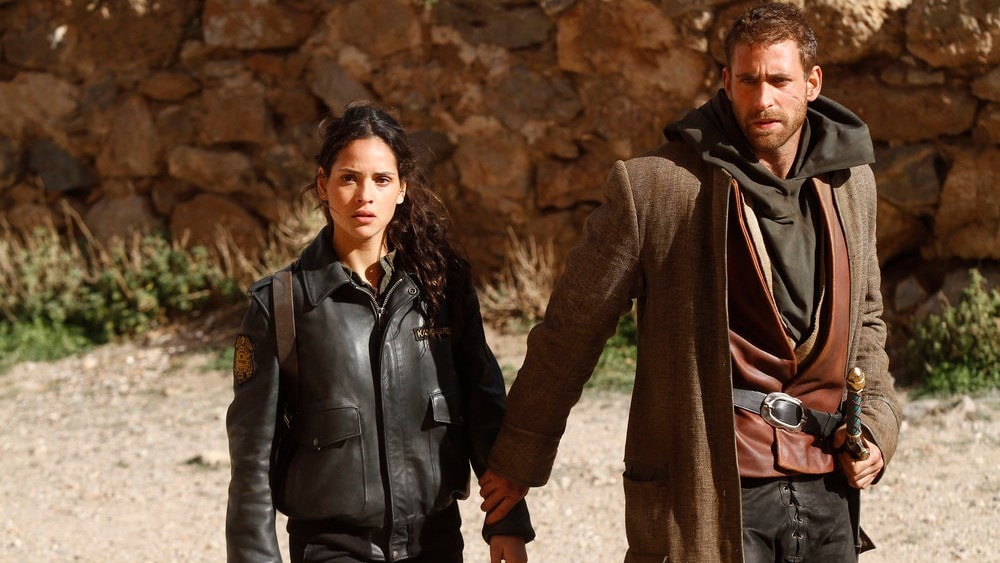 While L. Frank Baum’s Oz book series is less of a fairy tale and more of an entire magical universe, like Westeros or Middle Earth for children, it’s definitely extensive enough to build a whole new TV series around! That’s exactly what NBC did with Emerald City, which as we know, is the capital city of the Land of Oz itself.

The show starts off similarly to the story we’re all familiar with: Dorothy gets caught up in a tornado in Kansas and is mysteriously transported to the Land of Oz. When she arrives, she finds that she must make her way to Emerald City and find the wizard so she can go back home.

We don’t get to see the lion, scarecrow, or the tin man, but the Wicked Witches of the West and North are still central to the story – despite magic being outlawed by the wizard! Sadly, Emerald City was canceled after just one season. 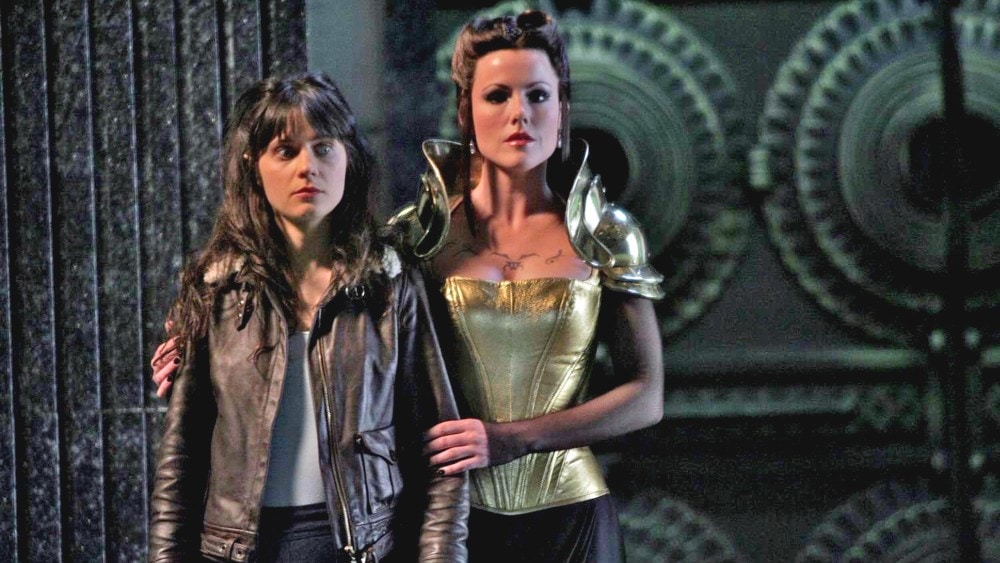 This Emmy award-winning series follows DG, a small-town waitress, who gets pulled into Outer Zone aka O.Z., a magical realm ruled by sorceress Azkadellia. Now DG has to journey through O.Z. to save the realm from Azkadellia’s rule and discover where she really comes from.

Along the way, DG meets former Queen’s advisor Glitch, telepath Raw and former law enforcer Cain who help her find the Emerald of the Eclipse and stop Azkadellia’s plans to cover O.Z. in permanent darkness. 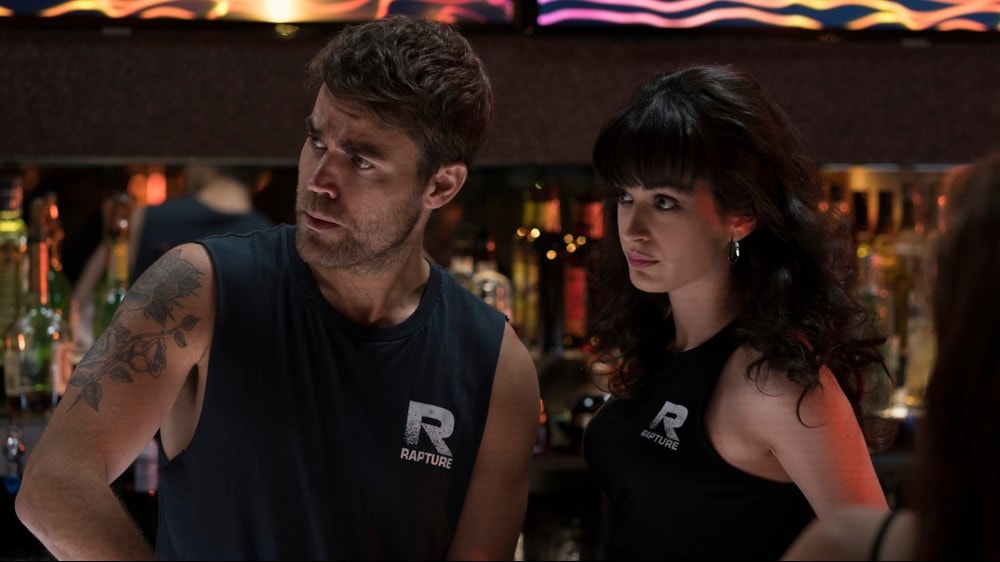 The Vampire Diaries creator Kevin Williamson and star Paul Wesley team up once again in this web TV anthology series for CBS All Access!

Tell Me a Story tells a different narrative with each season (of which there are sadly only two), and each narrative is a combination and modern retelling of three classic fairy tales – but with a dark, psychological thriller twist. As is pretty common with anthology series’, some cast members return each season, and with Tell Me a Story, both Paul Wesley and Danielle Campbell are familiar faces.

Season 1 was set in present-day New York City and told a dark tale with plotlines from The Three Little Pigs, Little Red Riding Hood, and Hansel and Gretel.

Season 2, on the other hand, focused on the three princesses in Cinderella, Sleeping Beauty, and Beauty and the Beast. Unfortunately, it wasn’t renewed for a third season. But otherwise, it would have woven a mixed tale of Snow White and the Seven Dwarves, Rapunzel, and Jack and the Beanstalk. 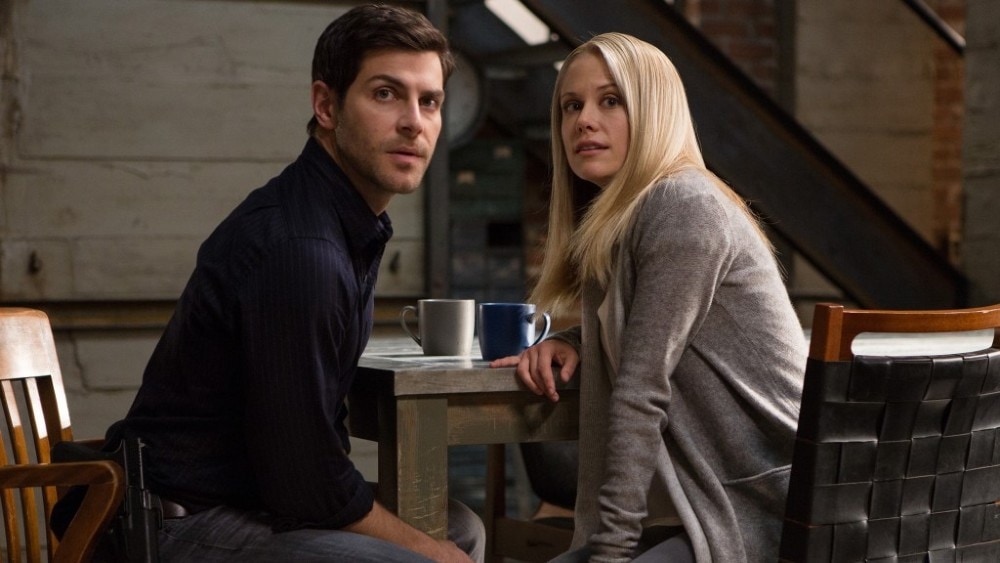 Fairy tales continue to take a darker turn with this entry on our list of the best fairy tale TV shows, although it hardly comes as a surprise considering the stories and characters are based on tales from the Grimm brothers – some of which are dark enough on their own. NBC’s Grimm is set in modern-day Portland and tells its story from the lens of a supernatural police drama.

Detective Nick Burnhardt from the Portland Police Department discovers that he’s a descendant from a long line of Grimms, supernatural guardians tasked with protecting the world against a group of dangerous mythological creatures called Wesen. He’s the only one who can see them but luckily, he doesn’t have to work alone.

There are a lot of Wesen species introduced throughout the six seasons, so make sure you pay close attention! 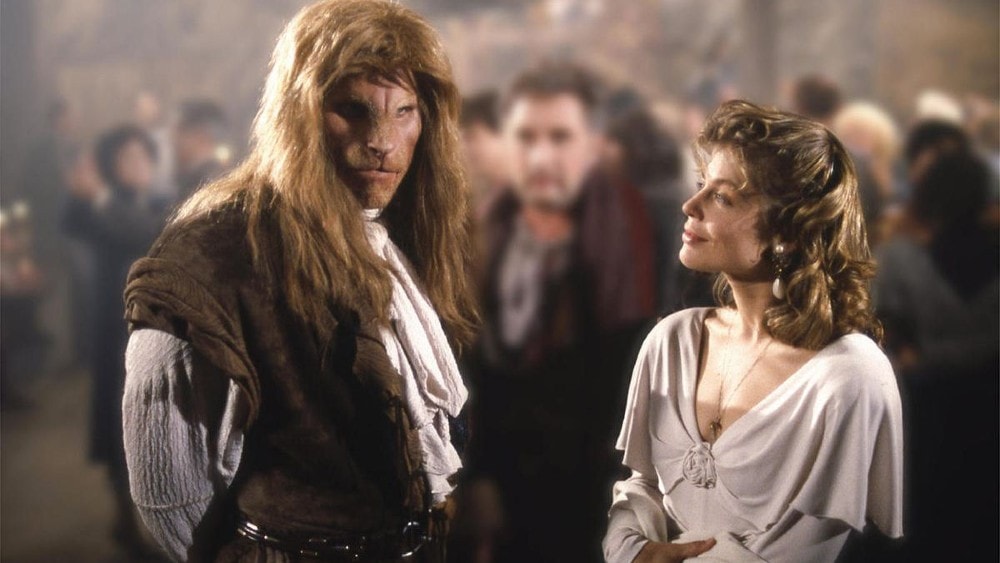 The show centers on Catherine Chandler, who’s rescued by Vincent, a half-man/half-beast living in the tunnels below New York, after being mistaken for somebody else and getting adducted and beaten within an inch of her life.

With the help of Vincent and the rest of his hidden community, Catherine is nursed back to health and falls in love with Vincent in the process. So, when Catherine returns to the surface, she changes her life and becomes an assistant district attorney determined to find the men who attacked her.

But, with the new position also come new dangers. Luckily, Cathrine and Vincent share a psychic bond, so Vincent is able to sense when Cathrine is in danger and comes to her rescue anytime she needs saving. 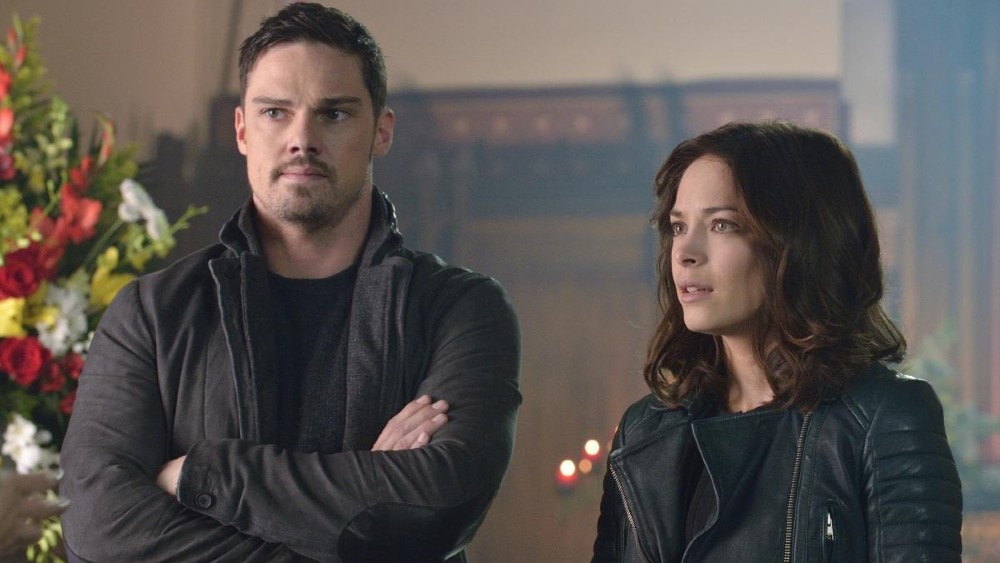 Who knew that fairy tales and cop shows would mix so well because this next fairytale-inspired series, similarly to Grimm and, in some aspects, also Once Upon a Time, is also a police procedural mixed with some mystery and sci-fi elements.

Loosely based on the previously-mentioned 1987 series Beauty and the Beast, Beauty & the Beast is an updated version of the famed fairy tale.

The show follows NYPD detective Catherine Chandler who meets Vincent Keller, an ex-soldier running from a secret government organization that faked his death and turned him into a mechanically-enhanced beast.

Over the four seasons of the show, we see their relationship develop as the two fall in love and search for answers to secrets surrounding their pasts. 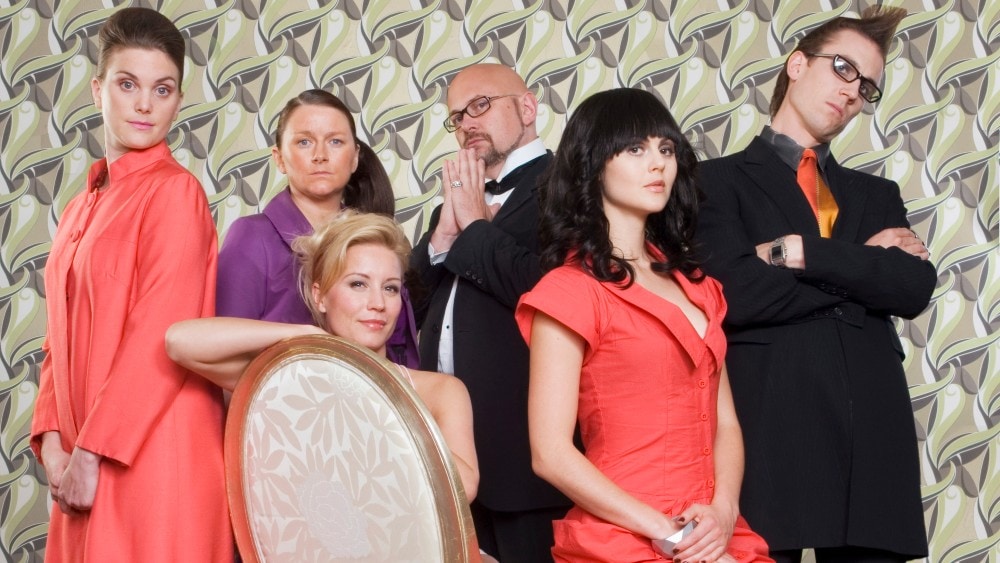 In this list of the best fairy tale TV shows we’re also including a British four-episode anthology series titled Fairy Tales, that was broadcast in 2008 on BBC One.

The show reimagined Rapunzel, Cinderella, The Emperor’s New Clothes (under “The Empress’s New Clothes”, turning the lead into a female character), and Billy Goat, placing each tale in a modern setting. The last episode, however, still features fantasy elements as it occurs in a world “where humans and trolls co-exist”. 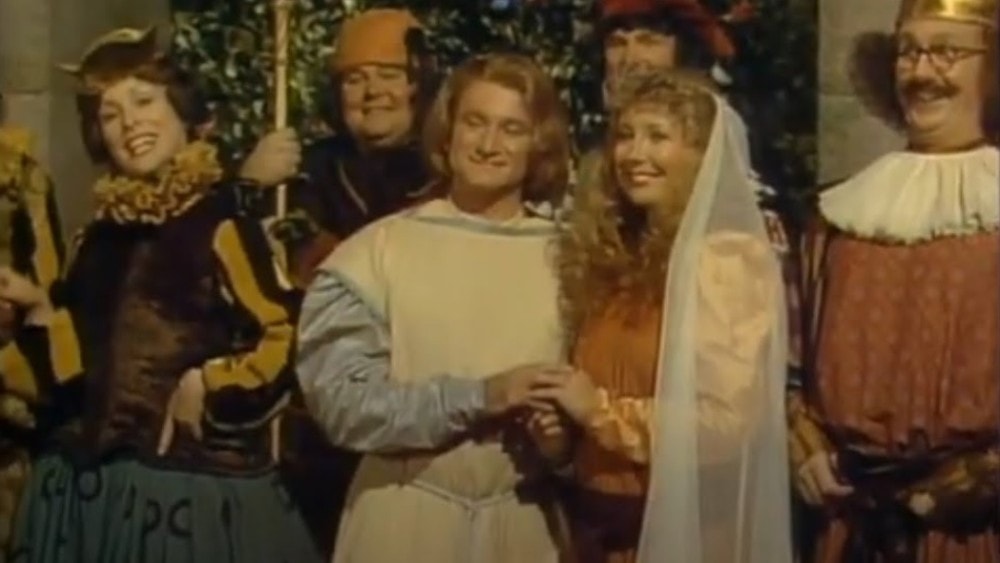 Lastly, in the same vein as the aforementioned Fairy Tales, we also have Shelley Duvall’s Faerie Tale Theatre.

As the name suggests, Faerie Tale Theatre was created by actress Shelley Duvall who had an idea of doing a live-action fairy tale anthology series while reading The Frog Prince during the filming of the movie Popeye.

The show consisted of 27 episodes and managed to adapt 25 popular fairy tales including those by The Brothers Grimm and Hans Christian Andersen. Famed directors such as Tim Burton and Francis Ford Coppola directed some of the episodes. And many of them also featured famous Hollywood actors and other celebrities such as Robin Williams, Jeff Bridges, Mick Jagger, Anjelica Huston, and Shelley herself among others.

Faerie Tale Theatre is often touted as one of the first original TV shows for a cable network. So it’s well worth a watch.