The newest Heartland episode was a big one. Because during it we not only saw Georgie graduating high school. But also Mitch make a major decision that had a ripple effect on almost all of the Heartland family. Want to know more? When keep on reading this Heartland season 13 episode 6 recap.

From racing to jumping

The episode opened with Amy riding Shooting Star, the horse from last season, and telling Lisa that Star is back to her full potential. However, instead of putting the horse back on the racetrack Lisa had a different plan for Star. She wants to expand her stables to include not only racehorses but also hunter jumpers. And Lisa thought that Star would make the perfect trail horse. So, she asked Amy to help with transitioning Shooting Star from being a racehorse to being a jumper.

And at first, the retraining wasn’t going so well. Star was a born racer, so Amy had a hard time keeping Star under control and stopping the horse from overjumping. But over time and with a bit of help from her mother’s journal on how to teach Star a little patience Amy was making headway. And at the end of the episode, we even saw Quinn, one of Lisa’s clients (well, client’s twenty-one-year-old son) help Amy teach Star just that.

Speaking of Quinn, he wasn’t just there to do some family business at Fairfield. Because as it turned out, Quinn and Georgie had a thing while they both were at the Euro camp. And now Quinn was in Hudson to both look at a horse for his father’s operation and to win Georgie back.

Heartland season 13 episode 6 was a big one for Georgie. After all, during it, we saw Georgie graduate high school and embark on the next stage of her life. But as with all huge life changes, it came with fear and uncertainty. And the fact that Georgie hadn’t heard from Mount Royal University yet whether she got in or not made things only worse.

But with some encouraging words from Jack Georgie put a smile on her face and was ready to face whatever her graduation and post-high school life threw at her. However, she was not ready for Quinn showing up out of the blue right after her grad ceremony. 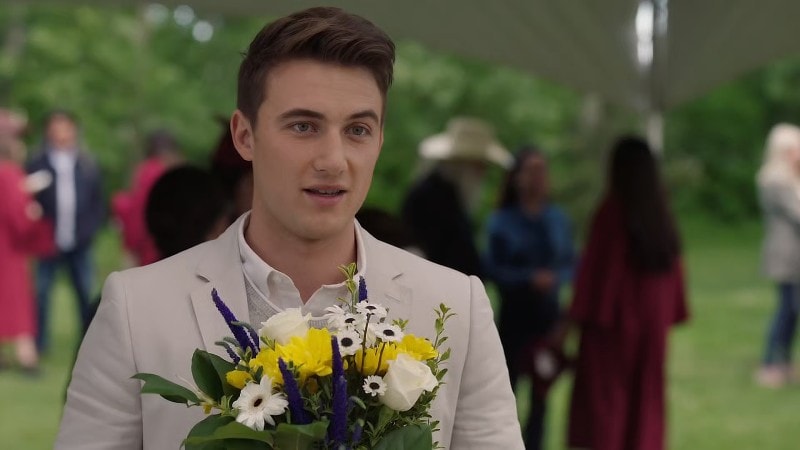 And Georgie wasn’t the only one surprised. All of Georgie’s family was, including Amy and Lisa who had already met Quinn at Fairfield. And since Quinn told Lisa early on in the episode that he was in Hudson in hopes of getting reacquainted with a girl, it made things especially awkward. But the real drama was only getting started.

Jade organized a party at Georgie’s loft for their whole graduating class. And during the party, Quinn showed up again. They talked and Georgie told Quinn that it wasn’t cool for him to just show up like this since they agreed that what happened in Europe stayed there. However, Quinn didn’t quite believe that that was really how Georgie felt. So, he put on a song that was meaningful to them (BRANT’s Higher Than High) and asked Georgie to dance.

It, of course, brought back old feelings and memories and Georgie and Quinn even kissed. But just as quickly as it happened Georgie was pushing Quinn away and telling him that this is real life and that Quinn wasted his time coming to see her. So, he finally got the hint and Georgie watched him leave with glossy eyes.

And the fact that Wyatt realized that he still has serious feelings for Georgie while watching Georgie and Quinn dance and kiss only added to the drama. So, by the end of the episode, Georgie had told Quinn to leave. And Wyatt admitted that he’s still in love with Georgie, which resulted in him telling Georgie that it’s probably best for everyone that she didn’t come on the road trip with him and Adam.

At least Georgie finally heard back from Mount Royal University and found out that she was accepted. Jade also moved in with Georgie. And Lisa offered Georgie a summer job at Fairfield after Georgie admitted to Lisa that she is interested in one day running an operation like Fairfield. But it still left Georgie uncertain of her future. Especially when it comes to her love life. Although I have a feeling that we haven’t seen the last of Quinn. And this might just mean that by the end of the season we might see all aspects of Georgie’s life fall into place.

On a different front, Heartland season 13 episode 6 was also quite a big episode for Mitch, Tim, and Jack. At least when it comes to their cattle business.

In the beginning portion of the episode, we saw Mitch tell Lou that there is a grass-fed herd of cattle for sale. So, he was gearing up to talk to Jack and try to finally convince the older man to expand their business. Yet when Jack shot him down once again, Mitch, fueled by Lou’s words about no risk, no reward, blurted out that he’s starting his own cattle operation. Which did not go over well with either Jack and Tim or Lou.

Tim and Jack were not happy to see Mitch already talking to Fred Garland about selling his beef, Aspen Grove beef, at Fred’s stores. Which meant that Mitch will officially become Heartland’s direct competitor.

While Lou wasn’t happy about Mitch deciding to keep the cattle at Aspen Grove. After all, they bought it as a vacation property. But, if Mitch was going to use it for his cattle, it most likely means that he will have to move there permanently.

And when Mitch finally realized that he made a mistake and went to Jack and Tim to clear the air and ask them to combine the herds it was too late. Tim was having none of it. While Jack just stood in the background silently. So, it will be really interesting to see where this whole storyline will go in the final four episodes of the season.

It was so great to see all the family come together for Georgie’s graduation. Everybody was there. From Tim, Jack, Lisa, Lou, Peter, and Katie, to Jade and Wyatt’s mom Jen as well as Amy, Lyndy and Ty, who made it just in time for the ceremony from Luke’s nature camp he was volunteering at. They were all dressed up and ready to see Georgie transition into the next step in her life. Top it off with a great and funny speech from Adam and we saw the perfect graduation. 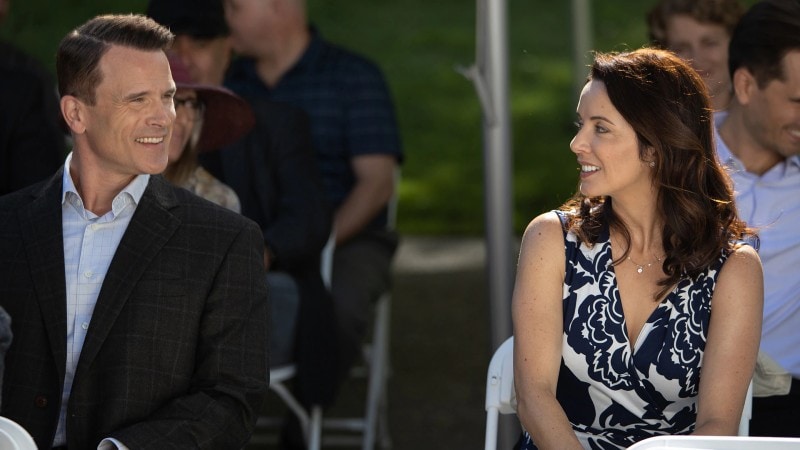 It was also sweet to see Lou and Peter reminisce and continue to co-parent their daughters as a strong parenting unit. Looks like lately, they are really getting the hang of co-parenting while also dating other people. Which is so great to see. Especially, after some ups and downs earlier on in their divorce.

And finally, how funny was it to see Jack break up Georgie’s party for a bit only to congratulate the kids on graduating and tell them not to mess up their bright futures that night. It was such a Jack moment and probably one of my favorite moments of the episode.

Jack: “You know, sometimes, even when you think you got it all planned out, you don’t really have a clue. When I was your age, a bit older maybe, I hit the road. I put this place in my review mirror and I wasn’t ever coming back. Then, well, my sister…”
Georgie: “I know, Amy told me about her.”
Jack: “That changed everything. It led me right back here. It’s not how I had it mapped out but I ended up exactly where I was supposed to be. So, maybe enjoy this big accomplishment now because tomorrow is always coming. And when it does, you’ll end up right where you’re supposed to be, too.”

And here’s the promo of next week’s all-new episode of Heartland, which is titled “The Art of Trust”: