We are slowly nearing the end of the season. But we aren’t there yet because this Heartland episode delivered heartfelt stories without the heightened drama that often comes with season finales. Want to know what exactly happened? Then keep on reading this Heartland season 13 episode 7 recap.

This episode we finally returned to the regular format of a client of the week as far as Amy’s storyline was concerned. And even revisited a character we met back in season 3.

Do you remember Jane from Heartland season 3 episode 9, aka the episodes where Ty and Scott got into a plane crash? Well, in this episode we saw Jane once again. Only this time the artist invited Amy to an art retreat she was hosting and asked for Amy’s help with her horse Canvas.

When Amy arrived at Alder Springs Jane explained that she and Canvas encountered a cougar while out on a trail ride. And ever since then Canvas had become unpredictable. Yet, when Amy took Canvas out for a trail ride and encountered the same cougar Canvas remained calm and followed Amy’s directions. Which led Amy to believe that the horse might not be the problem here.

But when Amy went to ask Jane if anything was going on with her that Canvas might be sensing while Jane was riding him Jane dismissed Amy s theory telling Amy to not play therapist. The next morning, however, Jane apologized to Amy for being so harsh and told her that she was losing her eyesight. Which means that soon she won’t be able to ride or paint. But Amy was having none of that.

She showed Jane that she could still ride even after she went blind. She just had to trust Canvas and their connection. And as a thank you Jane gifted Amy one of her paintings. But it wasn’t just a painting, it was one of Amy and Spartan showcasing the connection Amy has with her horse. A beautiful painting and a beautiful storyline.

Speaking of Jane’s workshop Amy wasn’t the only one who was there.

Lisa, being overworked and wanting some time to relax for her and Jack, signed them up for Jane’s art retreat. Well, she signed up to paint, letting Jack enjoy the great fishing spots that were nearby during the day. And planning to spend the night just the two of them. However, as soon as the two got to the cottage they met Cassandra and Caleb there.

Cass had roped Caleb into participating in Jane’s art classes. Yet, when Caleb heard Jack say that he will be fishing instead of painting, he quickly decided that he was joining Jack. Jack, of course, wasn’t all too happy about that. But Caleb really needed some guy time, so Jack went along with it. 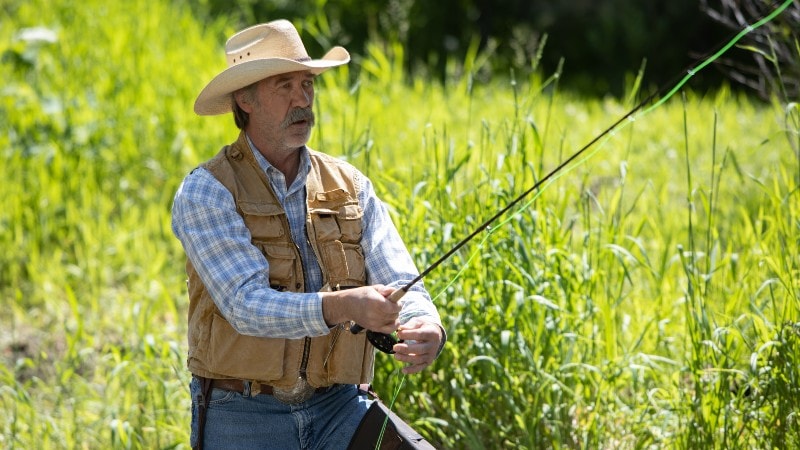 While fishing Caleb confessed to Jack that ever since they were trying and sadly failing to get pregnant, Cass was signing them up to all these activities to hide how she feels. Which made Caleb feel stuck in their relationship. Luckily, Jack had great advice for the younger man. He said for them to be able to move forward Caleb had to take a step back and appreciate what he had right now.

So, Caleb took that advice to heart and told Cass that just the two of them was enough for him. But Cass something to say, too. She told Caleb that she was pregnant with sent Caleb running to tell everybody about it. Yet again interrupting Jack and Lisa’s talk about possibly retiring.

All though Heartland season 13 episode 7 we also saw Lisa contemplating possibly retiring, because the stress of running Fairfield lately was just getting too much. She was constantly getting calls and she even made a serious mistake that put the client’s horse in jeopardy and blamed Georgie for it. Which made Lisa stop and think that maybe it was time to enjoy the quiet life with Jack.

Jack, however, didn’t think that it was time for them to retire. Yet he was considering it anyway since it looked like Lisa had made up her mind. But after relaxing at the retreat Lisa realized that she didn’t need to retire. She just needed a little R&R from time to time. So, the two decided that they liked where they were at, work, life, and relationship-wise. And went to celebrate Caleb and Cass’s big news with them.

Georgie this episode was also dealing with a lot. Both when it came to her relationship with Quinn and her showjumping.

At the end of the last episode, it looked like Quinn was ready to stick around Hudson and wait for Georgie to sort her life out. And this episode it looked like it was doing just that. He even stayed for a Heartland family dinner that Tim invited him to. Which granted was more of an interrogation than a dinner, but still, he was there. Took Georgie to test out Lisa’s new cross-country course. And talked her into entering a local show jumping competition after Georgie enjoyed the course so much. 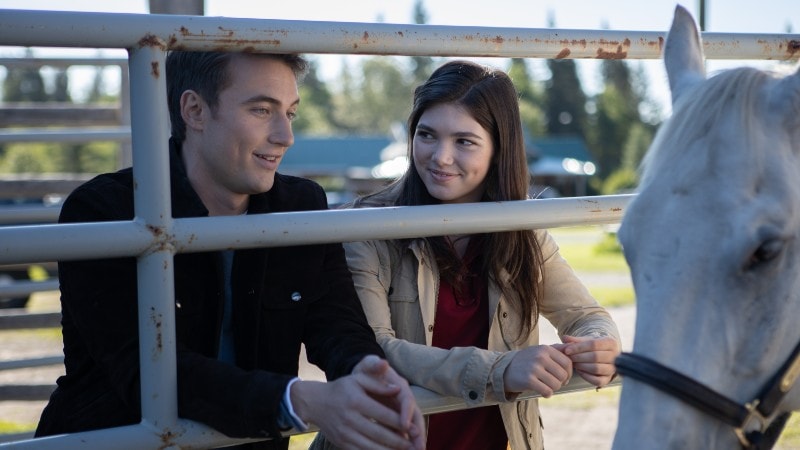 However, when it came time to train for the horse show, Georgie was freaking out. After not jumping since Europe she was a bit rusty. And it didn’t help that once Lou heard about the competition, she made a huge deal out of it. On top of that Quinn’s dad was not happy with him staying in Hudson for so long which made things all the more complicated.

In the end, Georgie didn’t go to the competition. But it was more to do with her and Quinn than her showjumping skills. Because right before they had to leave for the competition Quinn’s father called and told Quinn to get back to Florida. So, Georgie panicked and pushed Quinn away. He respected her wishes and left, of course, but he did tell her that he wants to see where their relationship could go.

And only after Quinn was gone Georgie realized that she made a mistake. Now we will just have to wait and see if she will get a chance to fix it with Quinn. Because if I’m being honest Quinn seemed like he’d be really good for Georgie. And I’d really like to see them being together. Even if it would be a long-distance relationship.

A cure for arguing

Finally, Lou was on her own path this episode. And it was one of trying to stop Katie and Luke from bickering all the time.

How did she try to achieve that? By first trying to make Luke and Katie paint their feelings. And then asking them to do a trust walk. However, none of it really worked.

So, what bonded the two together, in the end? It was Katie and Luke talking about how intense Lou can get. And how intense she got when she found out that Georgie was participating in the showjumping competition. Lou, of course, was not happy that that was the thing that got the two kids to finally get along. But as Tim pointed out, who cares if the kids are laughing at Lou, they’re laughing.

One thing I really enjoyed about this episode was seeing Amy do some more liberty work with Spartan. It’s always amazing to see. And despite Amy having some trouble with getting Spartan to do what she asked him to do it was still great to see her not push her horse or get angry at him. Rather she respected Spartan and therefore respected the bond that they have.

It was also great to see the short conversation Amy and Ty had over video chat. On Heartland season 13 episode 7 Ty was visiting his mom with Lyndy. But they still managed to show a short chat between the two. And during it, they even acknowledged that Amy hadn’t really had time away from Heartland and her responsibilities. At least not since their camping trip last season and Mongolia in season 11. Which is why it was great that she got to go to Jane’s retreat.

Finally, it was really funny to see Georgie’s family, well, mostly Tim, interrogating Quinn. And interesting to see that Quinn managed to hold his own against Tim. I think it’s only proof that Quinn is serious about Georgie and wanting to be with her. So, hopefully, Georgie realizes that as well.

Amy: “There is no rule that the visually impaired can’t ride. Especially if they are experienced like you are. You just have trust your horse.”
Jane: “Well, I already do.”
Amy: “Absolutely. You two have a great bond. But now you have to trust in it completely. I want you to close your eyes. No clear your mind and focus on your movements. You see how in sync they are with Canvas’s?”
Jane: “Yes. I think so.”
Amy: “Good. Now, remember how this feels. And whenever you’re out riding and you feel unsure come back to it. To how these movements feel. Because being secure with your horse isn’t about seeing. It’s about feeling.”
Jane: “Just like painting.”
Amy. “Exactly.”

Lastly, here is the preview for the next Heartland episode airing this Sunday, November 10: