The premiere of Heartland season 14 is finally here and what an episode it was!

It’s safe to say that it was an emotional gut punch to all of us. Yet, I think that the way this episode was handled was real and beautiful. And I hope that it’s an indicator of an amazing new chapter of Heartland.

Want to know what exactly happened in this episode? Then keep on reading this Heartland season 14 episode 1 recap!

Warning, SPOILERS AHEAD so read at your own discretion!

Losing someone is never easy. But losing someone suddenly and unexpectedly is even harder. Yet, that’s what Amy and the rest of the family were dealing with during Heartland season 14 episode 1.

The episode began right where season 13 left off with Amy working with the colt that she was trying to halter-break at the end of last season and eventually succeeding in joining him up with the little help of Spartan. But just as she was walking towards the house after asking Ty to put Spartan back in his pen, Ty collapsed.

Jack and Amy rushed towards Ty but unfortunately, he was gone. The doctors explained to Amy that after his surgery Ty had developed something called a deep vein thrombosis and that there wasn’t anything they could do. Ty had passed.

We then jump a year ahead and find Amy still reeling from the loss of her husband. Riding out to their half-built house every day and not working with clients anymore. Which had Jack and Tim worried.

And rightfully so! They were’s sure that Amy is dealing with the loss of Ty well or, really, at all, since she hadn’t even decided what to do with the house they were building in the year that has passed since Ty’s death.

Tim, of course, in his usual fashion asked Amy about it constantly, pressuring her to make a decision about the house and asking when she will start working with client horses again. But, luckily, Jack has a gentler touch than Tim and had something else in mind that might help Amy.

He invited Amy for a stay at his old fishing cabin to hopefully help her deal with Ty’s loss and decide whether to go through the memorial she had planned for Ty that weekend or not.

After some encouragement from Lisa, Amy decided to take Jack up on his offer, and the duo headed to Jack’s fishing cabin. And while the place still reminded Amy of Ty, especially of the time a snowstorm stranded them there in season 2 episode 18, it also finally allowed Amy to deal with her feelings of losing Ty.

Because while up at the cabin Jack and Amy had a much-needed heart-to-heart about losing the people they love.

And Amy admitted that she thinks that it’s her fault that Ty’s not with them anymore since the morning Ty died he had said that he feels weird yet Amy didn’t push him to go back to the hospital.

Luckily, Jack was there to comfort her and to tell her that it wasn’t her fault. In fact, it was because of Ty that Amy was alive and was able to be a mom to Lyndy. So, it felt like Amy was finally opening up and talking about what she felt. 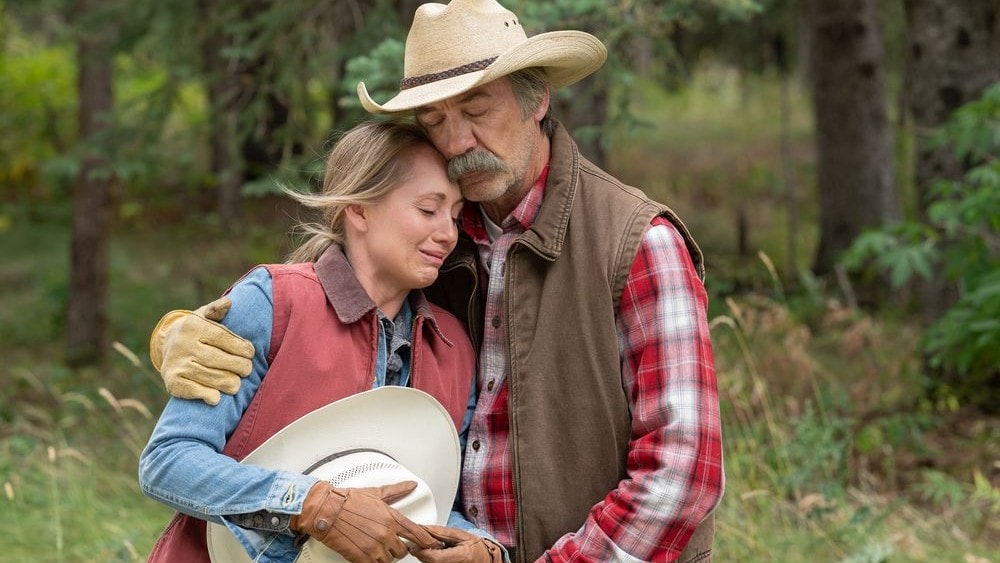 The next morning they found a herd of wild horses that was trapped by fallen trees. And while working to free the wildies Amy broke down and seemingly let herself feel the loss of Ty.

It was an incredibly sad yet also very cathartic and healing moment for Amy after which she pulled herself together and they freed the horses. And unbeknownst to them among the herd was also Casper, Ghost’s son, with his own little family. It helped Amy realize that life goes on and helped her have the strength she needed to decide to have the one-year memorial for Ty.

In the end, Amy, Lyndy, Jack, Lisa, Tim, Lou, Katie, Georgie, and Caleb rode out to the hill overlooking Heartland, shared memories of Ty, and scattered his ashes in the wind. Hopefully, marking a new beginning for all of them. One that feels like they are moving forward, not backward.

Since it’s been a year since the events of last season, in Heartland season 14 episode 1 we saw Georgie returning home after being away at college. She and Quinn are still going strong. And although she’s still training, she’s not competing anymore.

Quinn even offered to be her coach, however, Georgie declined her offer saying that she doesn’t want to mix her professional life with her personal one. Besides, he’s coaching another girl, Fiona Mackintosh.

Georgie’s family was surprised to hear that she’s not competing anymore. So Amy encouraged her to enter the horse show that’s coming up that weekend, hopefully pushing her to start competing again. And it worked, Georgie decided that she did want to compete in the upcoming show. However, it didn’t go so well.

Despite being confident at the start of her run, during it, Georgie thought she saw Ty walking past the arena so she lost focus and didn’t even complete her run. 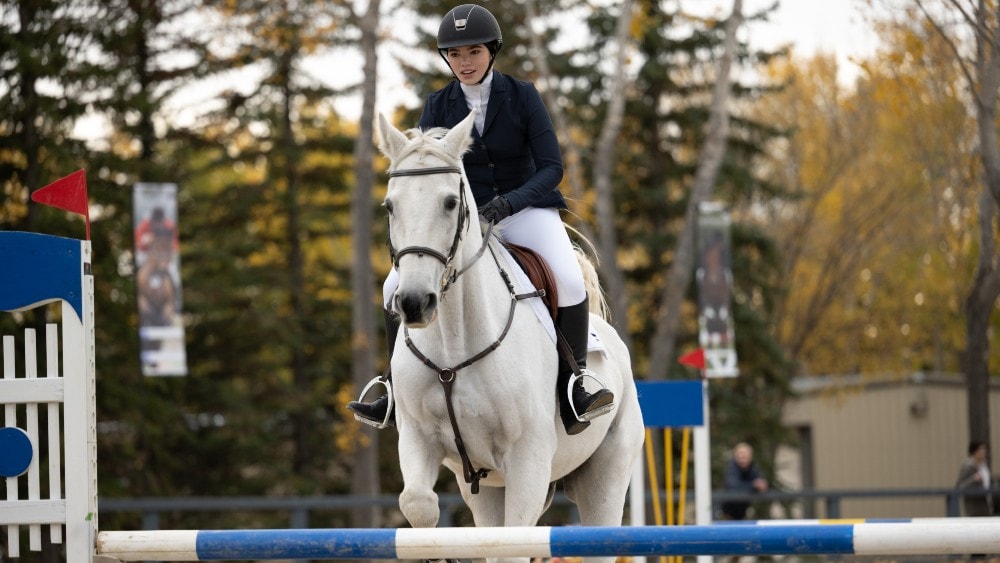 You would expect that that spooked Georgie even more and made her stop competing again. However, it actually had the opposite effect, it made her want to work harder. So, after Ty’s memorial, she asked Quinn to be her trainer. And when he asked if Georgie’s sure, she answered affirmatively.

Georgie: “I wanna go for it. And I changed my mind, I want you to be my coach if you’re willing.”
Quinn: “What about our relationship?”
Georgie: “I’m sure it will survive. Besides, you got to be the one to take me to the Olympics.”

So it looks like Georgie’s dream of getting to the Olympics is alive again. I can’t wait to see her and Quinn working together to get there!

The last bigger storyline for this episode was all about how Lou was handling being Hudson’s new Mayor. And although a year had passed since her election, it seemed that she was still struggling with the responsibility that her new position brought.

I mean, being Mayor while also trying to be a good mom to her daughters and a good big sister to a grieving Amy couldn’t be easy. At least she had her Chief Administrative Officer Rick to help her with the mayoral stuff. Granted, he might be more invested in the status of being the CAO of a town’s mayor, in general, no matter who the actual mayor is.

Fortunately, there was a bright spot in Lou’s life in the midst of all the struggles and pain – Mitch. We saw just a short video chat between the two since Lou was in Hudson while Mitch was at Aspen Grove. But during it, Mitch did ask Lou why she wasn’t wearing his ring.

Lou’s answer was that she didn’t know how Amy would react if she saw a ring on Lou’s finger. So, could it really be that Lou and Mitch are engaged? I sure hope so! After all, why else would Lou be worried about Amy’s reaction if it wasn’t an engagement ring?

I’m just glad to see that Mitch and Lou worked things out since the final episode of last season left them on a bit of an uneven ground. And I’m excited to hear more about their future plans as well as see Lou tackling her mayoral duties.

In my article on what can we expect to see in season 14, I mentioned that this season there are several new actors joining the cast of Heartland. And among them is Ava Tran.

In this episode, we caught the first glimpse at her as Parker protesting the use of pesticides outside Lou’s new office. I’m really intrigued by Ava’s character. So I can’t wait to learn more about Parker and see how she fits into the Heartland world.

As hard as it was to find out that Graham Wardle and therefore Ty won’t be a part of Heartland moving forward, I actually really loved this episode.

Ty’s loss was beautifully handled. And, now, after I’ve seen this episode, I think that this season will be amazing because there are so many great stories to explore. Not only when it comes to Amy’s widowhood and Ty’s legacy but also the future of all of the characters – Georgie’s Olympic dreams, Lou’s Mayoral run, you name it. So, I’m really hopeful that the future of Heartland is bright (and long).

What did YOU think of the episode? Let me know in the comments below and see you next week with the review of episode 2 of season 14!