Sky One’s fantasy drama series A Discovery of Witches became a hit when its first season premiered in September 2018. In fact, Digital Spy reports that the show garnered roughly 2 million viewers! That’s pretty impressive, and explains why it became Sky One’s most popular drama that year!

Whether you’re a new fan or you’ve been watching since the pilot episode, you’ve definitely come to the right place because we’ve got answers for all your burning questions about A Discovery of Witches.

So if you find yourself asking “What happened?”, “Where can I watch it again?”, or even “What happens next?”, this is the article for you!

General questions on A Discovery of Witches

What is A Discovery of Witches about?

A Discovery of Witches follows Diana Bishop, a celebrated American scholar and historian – and a closeted witch. While working at the Bodleian Library in Oxford, she unexpectedly discovers an ancient manuscript that unraveled secrets about the supernatural world.

In order to discover the manuscript’s mysteries and maintain the peace between all supernatural beings, Diana must embrace her powers and her destiny as a witch – aided by the charming vampire and professor of Biochemistry, Matthew Clairmont. Though their kind are naturally averse to each other, the two eventually form a budding romance yet unheard of in their world.

How does season 1 end?

In the season finale, Matthew is rushing to save Diana from the grips of his former lover Juliette, who tries to kill him. Diana finally discovers the extent of her powers and how strong she is as a witch when she kills Juliette, and saves Matthew’s life by giving him her blood and making a deal with the Crone and the Maiden.

In order to hide from the Congregation and give Diana time to learn more and develop her powers, they set about making preparations to timewalk, deciding on 1519 London. This setting in the past sets up the location for the next installment in the series. 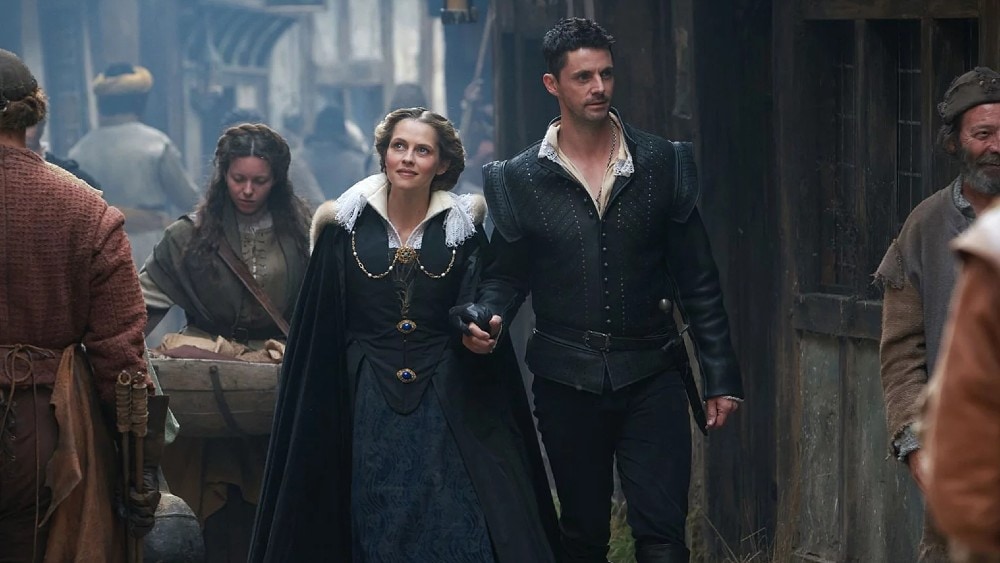 Which book is A Discovery of Witches based on?

The show is based on author Deborah Harkness’ All Souls Trilogy of novels, the first of which the show is named after and serves as the basis for the first season. Subsequently, the following two novels, Shadow of Night and The Book of Life, will be adapted into the second and third seasons, respectively.

Harkness also published a companion novel to the trilogy entitled Time’s Convert that told the origin story of the Marcus Whitmore character. Who knows, this could be material for a potential spin-off or incorporated into succeeding seasons.

How many seasons are there?

So far, only one season has aired. Don’t worry, though – read on to the end to find out more about the future of the show!

How many episodes are in A Discovery of Witches season 1?

This first season had eight episodes, each with a running time of about 45 minutes. Feel like binge-watching? All you need is 6 hours and you’ll be all caught up with the season!

What is A Discovery of Witches’ production company?

Production companies overseeing A Discovery of Witches are Sky Productions and Bad Wolf, the latter bringing executive producers Julie Gardner and Jane Tranter to the team.

A Discovery of Witches filming locations

Where is A Discovery of Witches filmed?

Season 1 of A Discovery of Witches was filmed on location in England and Wales, as well as at the Bad Wolf studios in Cardiff. Some filming locations included Radcliffe Camera and Exeter College for the exterior of Oxford, and Insole Court in Cardiff as Matthew’s home.

Where are the library scenes filmed?

Scenes in the Bodleian Library were filmed on a recreated set at the Bad Wolf Studios, which was the first production in their new studio! 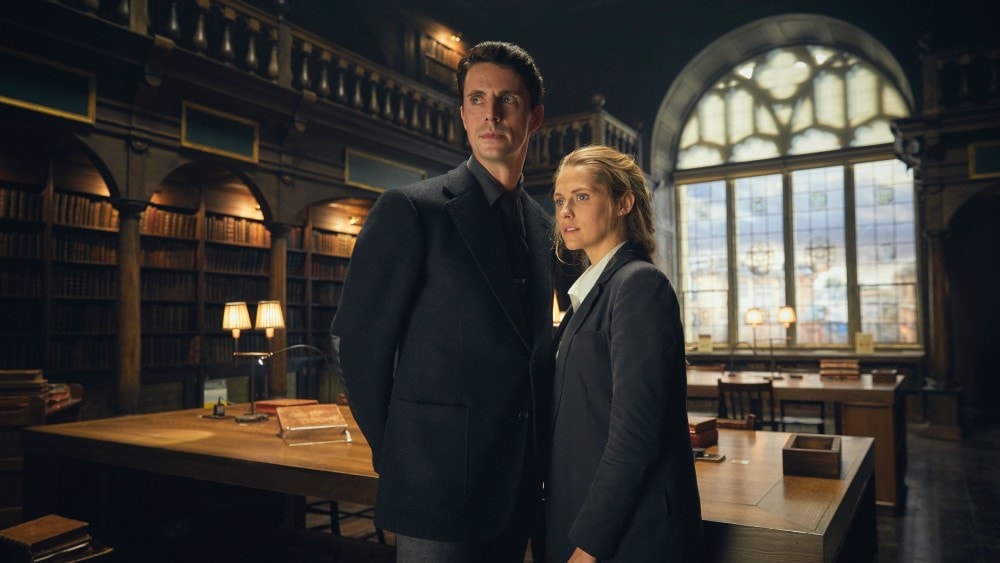 How to watch the show?

How to watch A Discovery of Witches? On what channel does it air?

In the UK, A Discovery of Witches is aired on the Sky One channel, with episodes released on the Sky streaming service Now TV after its initial broadcast. You can also purchase the first season on Amazon Prime Video.

Where to watch A Discovery of Witches:

Will A Discovery of Witches be on Netflix or Hulu?

There are no indications yet that it’ll be available on either Netflix or Hulu as of the moment.

When is A Discovery of Witches on AMC?

The show began airing for American viewers on AMC and BBC America in April 2019, and is still currently available for streaming on AMC’s subscription services: Shudder, Sundance Now, and AMC Premiere on desktop and mobile.

Can I watch it for free?

Since both cable television and streaming services are paid for, watching A Discovery of Witches in full isn’t free. Trust us, though – it’s definitely worth it to pay for!

Can I get A Discovery of Witches on DVD?

Absolutely! You can purchase the DVD set from Amazon.

Questions about the mythology of the series

What is bundling on A Discovery of Witches?

The practice of bundling in the series comes from the ancient tradition that involves two people essentially being “bundled’ together on a bed, fully clothed. It’s intended to create intimacy between a couple without them actually having sex, and it was the first intimate moment for Matthew and Diana.

What does being spellbound mean? And why is Diana spellbound?

When a witch is spellbound, their powers are limited or restrained. It’s used for those who are unable to control their powers.

Diana was spellbound by her parents, Stephen and Rebecca, to prevent her from being discovered – or targeted – by other witches because of her ancestry and potential with magic.

What is a weaver on A Discovery of Witches?

Weavers are a rare and more powerful type of witch. Weavers are able to create, or weave, their own spells which can sometimes only be used by the maker themselves.

Weavers were once revered by other witches but were eventually forced to go into hiding after the other witches began to both fear and resent their stronger powers.

What does craving mean?

A vampire’s craving is pretty much the same feeling we humans get when we crave for a certain kind of food – except with the vamps, it’s an extremely strong craving for blood.

Matthew craves Diana, which indicates a certain degree of care and concern outside of yearning for her blood.

Who is the head in the box on A Discovery of Witches?

The head in the box that Gerbert has carried around with him for centuries is the head of a tortured witch who can speak prophecies.

Unfortunately for her, Meridiana is that prophesying head in the box. She begs Satu to release her to end her centuries-long suffering.

If we’re to stick to the lore laid out in the original novels, then Diana will live a normal, human lifespan as confirmed by Deborah Harkness herself.

Does Matthew die on A Discovery of Witches season 1?

Like we mentioned earlier, Matthew does very nearly die in the season finale. In her rage, Diana kills the vampire who cut his throat and makes a sacrificial deal with the goddess to save his life – on top of having him drink straight from her neck.

What can daemons do on A Discovery of Witches?

While also supernatural beings with a touch of magic in them, daemons are not nearly as powerful as witches. They’re generally known to be “geniuses” in certain aspects, whether it’s in business and politics, or because they’re naturally more charismatic or creative than usual. However, because of this, they’re also often misunderstood and thought to be “odd”.

What is witch wind?

Some witches, like Diana, are able to summon the elements to help them get out of danger. The witch wind is one of them and can become so strong that it will cause great destruction and if the witch can’t control her powers, will also get out of control.

What are the Knights of Lazarus?

Based on an actual historical order in the 12th century, the Knights of Lazarus in A Discovery of Witches was an order of chivalry founded at a leper hospital in order to treat leprosy. Matthew is a part of the order and eventually reveals he is actually their head, replacing his father upon his death.

About the future of the series

It’s understandable to be worried about the future of the show considering it’s been two whole years since the first season premiered! We haven’t gone without any news at all, however.

Not long after the first season began airing, Sky One renewed the show for not just one but two new seasons!

The second season consisted of ten episodes and premiered in January 2021. While the third and final season of the show is set to air on January 2022.

When is A Discovery of Witches season 2 coming out?

Season 2 of A Discovery of Witches premiered in the UK on Sky TV on Friday, January 8th, 2021. While fans in the US and Canada got to see season 2 episode 1 the next day, on Saturday, January 9th, 2021 on Sundance Now and Shudder.

When is A Discovery of Witches season 3 coming out?

Ever since season 2 ended fans have been patiently waiting for the third and final season in the epic trilogy that is A Discovery of Witches. And luckily we won’t have to wait long now.

Season 3 of A Discovery of Witches is set to premiere in the UK (on Sky Max) on January 7th. While the final season of the show will have its US premiere on AMC+, Sundance Now, and Shudder a day later on January 8th!

And here’s a trailer for season 3: