Not many people realize that being a freelancer is not easy or glamorous. You have to deal with many adversities including nosy neighbors and prejudices from those who do work regular, 9-to-5 jobs. Luckily for freelancers, there are projects out there that educate the general public on what it’s really like to work from home. One of these properties being Freelance, a brand new webseries that premiered on YouTube on February 1st. And we had the pleasure of chatting with the show’s writer and director Allison Flom.

In her day-to-day life, Allison Flom wears many hats. Including those of an artist, creator, writer, producer, director and, yes, a freelancer. So we talked to Allison about what it’s like to be a writer, producer, and director of a project, what inspired her to write Freelance and which NYC sights she would recommend for a hard-core TV show fan to visit among other things. So read the interview below. And make sure to check out Freelance on YouTube. You won’t regret it!

Tvshowpilot: I loved Freelance! It’s so current and topical! What inspired you to write Freelance?

Allison Flom: Thank you! I was thinking about people who work from coffee shops, or home, or in different spaces every day. That lack of environmental consistency leaves us available to interactions that can transform us at any time. I love transformation.

I’ve had such profound moments with strangers during the traditional workday, and I wouldn’t get that in a “normal” office setting. I was looking into apartment windows in NYC on a Monday afternoon, and I loved imagining what was happening in there. I was like, I want to write that!

Ultimately I hope to tell stories that ask audiences to be curious. These stories set such high stakes on the mundane; maybe people will start engaging with the people around them and imagining their lives beyond that moment. That, to me, is empathy. And empathy is absolutely essential to social change.

Tvshowpilot: When describing this YouTube series, you emphasize the fact that that the goal of Freelance is to foster empathy for young freelancers. Have you yourself experienced prejudice that some people nowadays have towards freelancers?

Allison Flom: I want to foster empathy for everyone! We could all really use some kindness from strangers. But, yes. There are people who love me but also think I don’t do anything all day because I’m doing laundry at 2 pm on a Wednesday, and that feels unfair. It is inundating to make my own schedule, and constantly navigating balance within lack of structure can be exhausting. It’s also an amazing gift that I feel grateful for every day.

For so many freelancers that I know, the “life stuff” is harder than the work stuff. The characters in this show are having intimate emotional crises, but no one is saying that their job is too hard. It’s the life stuff that’s too hard. Charlie and Patrick, for example, are in combat with themselves in different ways. But there’s no question in my mind that Charlie’s an excellent clown and Patrick does great accounting. Freelancers are messy! I loved writing them because I get it.

Tvshowpilot: You not only wrote Freelance but also produced and directed the webseries. How was the experience of wearing so many hats at once?

Allison Flom: It was so fun. It was also executive produced by Lizzie Frankenthal and Maya Bakhai. Working as a team of all women under 25 was powerful and joyous, and we were genuinely kind to each other. And collaborative. Ugh, they’re so amazing.

I also had a magnificent crew and cast! A group of 20-somethings showed up every day, 7 days in a row, at 6 am to either Bushwick or the East Village, for very little pay, because they believed in these characters. That was so affirming and invigorating to me. Every night after shooting I went to sleep feeling like, I can’t wait to do that again tomorrow.

Tvshowpilot: You shot the whole webseries, five episodes, in only seven days. What were the biggest challenges you faced due to such a tight shooting schedule?

Allison Flom: Not getting the shots we planned for, and not having enough time to dig into the characters and their inner lives as much as I planned. I’m really an actor’s director. I’ve only directed theatre, never film, and I’m accustomed to gradually building something in a rehearsal process, in collaboration with the actors. But they brought their own work to set and it was truly easy to direct them. Also, in a more pragmatic sense, the weather, therefore the light, was different every day of filming. Peter Pascucci, our DP, and colorist, is meticulous and tenacious in his craft. He made everything look amazing, and while I was working with actors, he was perfecting the shots. We’re a great team.

Tvshowpilot: I like that the webseries has no main character. It’s a storytelling approach that you don’t see all that often. What made you choose this type of format for Freelance?

Allison Flom: Thank you. I love an ensemble cast. I also wanted to ask some questions about how insular and lonely life can be, especially for my generation where we’re all kind of alone together. The interactions these characters are having remind them, you’re not the only person in the world, you are making an impact on people around you just by doing your work…what do you want to do with that power?

Tvshowpilot: You’re born and raised in New York. Did that have anything to do with you choosing to use the city as a backdrop for the webseries?

Allison Flom: Of course! All my defining experiences have been in New York. The magic of this city is alive and clear for me, and I knew Freelance had to be set here. I especially loved filming at Ferns in the East Village, one of my favourite bars. Even when our PA, Sean Conrad and I were stuck in a snowstorm on the Manhattan Bridge with all the equipment, I looked across the river at a million little lights and felt so at ease. Like, this will get done no matter what, because we’re in New York.

Tvshowpilot: I saw that you’re a founding Board Member of The Sunny Center Foundation, as well as co-creator of Fogbreak Justice’s CrimSim. What motivated you to champion these two causes that are both related to criminal injustice?

Allison Flom: Oh wow you really did your research! Thank you for asking about these projects that are so close to my heart. The short answer is, our criminal justice system is broken. Change is urgent. This country is 5% of the world’s population, yet we incarcerate 25% of the world’s population. That is unacceptable to me. I am drawn to people doing important work around wrongful conviction, implicit racial bias, mandatory minimum sentencing, and human rights issues (in and outside of the criminal justice system). I’m hoping to build my career in television, but I will always make time for this work because I know there is power in my words and my passion. I can create change, and I refuse to be silent or complacent where I see injustice. I am very privileged, and I will continue to use that privilege for good however I can. It’s an honor to be a part of organizations that are championing this work.

Tvshowpilot: You’re a licensed sightseeing guide as well in addition to being a talented artist. Since here at tvshowpilot we are all about TV shows, which NYC sights would you recommend a hard-core TV show fan to visit?

Allison Flom: I love giving walking tours! I always end up telling stories about NYC history in social settings. Sometimes it’s casual cool, sometimes it annoys everyone, but storytelling in all its forms is invigorating to me. All the little corners of New York have stories—Bethesda Fountain/The Poets Walk, Essex Market, The Bushwick Collective and Tompkins Square Park are a few places that immediately come to mind. Also, the corner of Broad and Wall Streets has a ton of iconic buildings (Federal Hall, The New York Stock Exchange, Trinity Church), but not a lot of people know that the southeast corner used to be Thomas Downing’s Oyster House. This was one of the swankiest restaurants in New York, catering to Manhattan’s elite from 1825-1860. Thomas Downing was a well-respected restauranteur and abolitionist, and little did the fancy dinner guests know, the cellars below the restaurant were a stop on the Underground Railroad. While they enjoyed fried oysters and wine under crystal chandeliers, Thomas’ son George was assisting fugitive slaves on their journeys to freedom. Sometimes when I stand at an intersection I pause to research some stories, and I’m humbled. I think about my role in history, and if someone ever mentions me or my work on a walking tour, what do I want them to say?

Allison Flom: I hope to make Season 2 of Freelance this year! I’m so grateful for your interest, I hope that people like the show and share it. To contact me and to see news about upcoming projects, please visit allisonleeflom.com. Thank you again!

And there you have it, our interview with Allison Flom in which we talked all about her love for ensemble casts, freelancing, New York and, of course, Allison’s new webseries Freelance, that she co-produced with Lizzie Frankenthal and Maya Bakhai, the two talented ladies in the picture with Allison (in the middle)! To keep up with Allison check out her website allisonleeflom.com. Watch all five episodes Freelance on YouTube right now! And follow Freelance on Instagram to be the first to know when season 2 drops.

Most Anticipated TV Shows of 2020 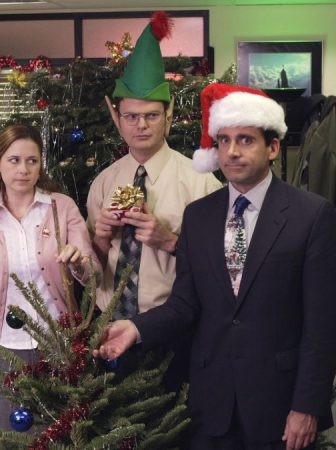