The wait is over, Heartland fans because I can finally confirm that Heartland has been renewed for season 12. That’s right, Heartland season 12 is happening and CBC is giving another 11 episodes to Canada’s longest-running family drama. It will no doubt be a season of family, horses and coming together to celebrate this beautiful family-friendly show. Ain’t that a great way to ring in the weekend?

If last year the announcement that Heartland has been picked up for another season was delivered by the show’s star Amber Marshall. Then this year the honor went to the Blog Whisperer. Who just put up the weekly Thursday blog, announcing the amazing news of Heartland getting a 12th season! You can read the full announcement in the picture below or by going to cbc.ca/heartland/blog! 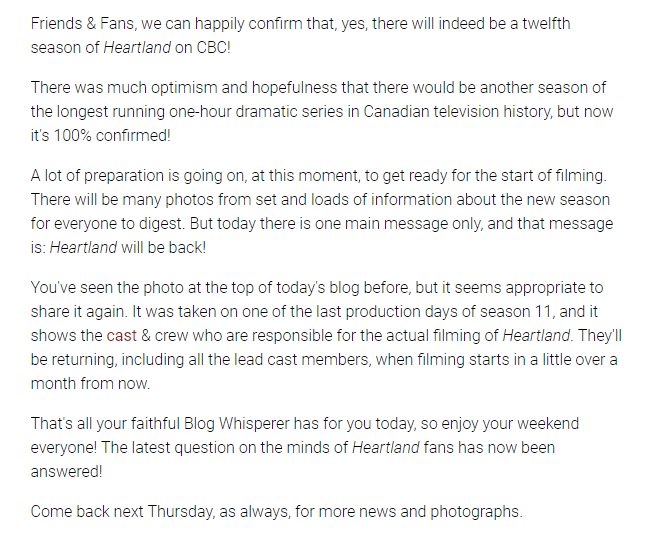 What do we know about Heartland season 12?

On top of that, we do know that all the lead actors will be back for Heartland season 12. Which includes Amber Marshall, Graham Wardle, Shaun Johnston, Chris Potter, Michelle Morgan, Alisha Newton and many more. And finally, we also know that the twelfth season of Heartland will go into production in about a month. Meaning that in a month we will start getting pictures from the set. As well as little more information on the upcoming season.

What do I want to see happen in the 12th season of Heartland?

Meanwhile, we can only talk about what we would like to see happen in Heartland season 12. And boy, there is a lot! For starters, I would love to see more of Ty and Lou, because this past season both characters were away quite a bit. I would also love to see more of Amy and Ty as parents and experiencing big moments like Lyndy’s first word and first step. Because those would definitely make for adorable scenes.

When it comes to Georgie, I would like to see her go further in her showjumping carrier. Because now that she won the Fall Finale in the last episode of season 11, she has definitely proven that she is a capable competitor. Additionally, I would love it if they did a bit lighter storylines for Tim next season. Because this past season Tim had a lot of hard and heavy scenes.

For Lou, I think it would be really interesting to actually see what she has been up to in New York since we don’t get to see the commanding business-woman side of Lou that often. And as for Jack and Lisa… Since season 11 saw Lisa finally becoming a full-fledged member of the Heartland family. Her own fireplace stone and all. It would be great if in season 12 they would show Lisa really adjusting to her life at the Heartland ranch. And all the amazing storylines that could come out of it for her and Jack.

Now it’s your turn! Comment below and let me know how excited you are for Heartland season 12. And what do you want to see happen in it? Let’s celebrate the fact that Heartland is returning for season 12 in the comments!