And so, the end of Heartland season 13 is here. And what an episode it was. Filled with suspense, danger, and big moments.

Want to know what happened during it? Then keep on reading this recap of Heartland season 13 episode 10.

When it comes to season finales, Heartland really knows what it’s doing because this one was intense. And it was mostly due to a storyline that began in the last episode.

If you remember, in the last episode we saw wild animals coming near people’s homes because of a housing project by Werth Developments that was being built near a wildlife corridor. And at the end of the episode, we saw J. D. Werth asking a shady guy to take care of the wildlife problem.

So, this episode we saw just that. Which came with some major consequences.

Not only did we saw the shady poacher guy trying to shoot a wolf right next to Tim’s RV. But then Remi went missing. And when Amy and Jack found her, she had been caught in a snare trap.

Luckily, the snare was stuck around Remi’s body, not her neck which meant that Ty was able to quickly nurse Remi back to health. But soon enough the vet clinic was swamped with people bringing in their pets that had been caught in snares. And since most of the injured animals were found around Gibson Creek aka Werth’s new development Lou quickly put two and two together.

She even went to confront J. D. about it. And although he was denying Lou’s accusations, Lou did see him talking to the same shady guy in a white truck. During which conversation, J. D. ordered the guy to stop using snares since the police had already figured out that they were made by the same person, and to just stick to his rifle.

So, that’s what the guy did. And Amy and Ty got caught in his crossfire.

Caught in the crossfire

All episode long we saw Amy trying to gentle the colt that bonded with Spartan in the previous episode. But to no avail. It seemed like the horse just wanted to say wild.

And when the colt accidentally got free from the pen that he was in while Amy and Ty were trying to get the horse into a trailer to bring him to Heartland, Amy gave up and let the animal be.

Ty had rarely seen Amy this upset, so the two decided to sit and talk. During which Amy admitted to Ty that she was so frustrated because she was scared of losing Spartan. After all, the horse was her last link to her mom. And the fact that Luke left and Remi got hurt didn’t help her state of mind. 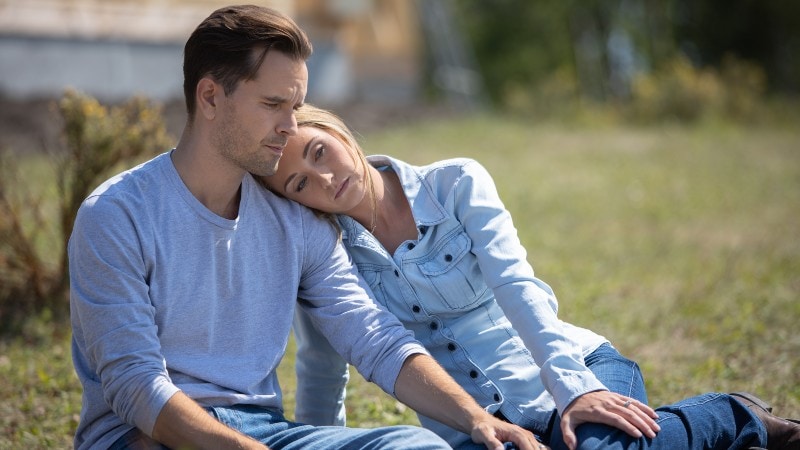 Ty, of course, was there for his wife.

He quickly assured Amy that Spartan still has a long life ahead of him. And that not only is Remi okay, but that going back to living with his mom was what’s best for Luke. So the two shared a beautiful moment and Ty left to clean up their new home a bit so the contractor could finish building it.

But while he was on his way to the construction site, he spotted a wolf that was heading towards Amy and him. And then a shot rang out.

Someone was shooting at the wolf. And since the animal was running right for Amy and Ty, the shooter missed the wolf and shot Amy in the shoulder.

Ty rushed Amy to the hospital and as soon as he arrived the hospital staff took Amy inside. But just then a nurse realized that Amy wasn’t the only one hurt.

All is well that ends well

Ty had been shot as well. But with adrenalin pumping through his veins he didn’t feel his side until the nurse pointed it out after Amy was safely inside the hospital.

Luckily, they both were fine in the end. But if Ty hadn’t seen the wolf and hadn’t tackled Amy down when he did the bullet would have hit Amy straight on.

This meant that despite getting shot himself, Ty actually saved his wife’s life.

Additionally, Ty saw the poacher’s truck while he was rushing Amy to the hospital and memorized the license plate. And, since the truck sounded oddly similar to the truck that Lou saw J. D. Werth walk up to after their conversation, Lou called in a tip and the guy was caught. Along with J. D. thanks to the poacher spilling the beans on who hired him to take care of the wild animal problem.

But not only that, at the end of the episode we saw the colt that Amy was trying to halter-break show up at Heartland. The horse even voluntarily ran into the pen with Spartan. And Amy made quick work to gain the horse’s trust.

So, by the end of the episode, the colt joined up and we got to see Amy with both Spartan and the new colt by her side.

Speaking of Lou, this was a huge episode for her as well. After all, it was the episode in which we finally found out whether she became the new Mayor of Hudson or not.

And, spoiler alert, she did. But getting there wasn’t easy. 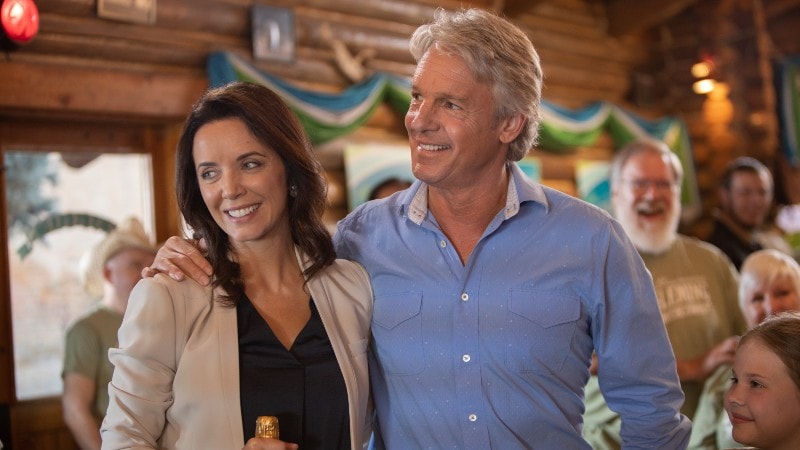 During the episode, we not only saw Lou struggle with the final days of her campaign and do everything in her power to actually win the election. But she also had to deal with the tense family situation that was developing.

In episode 6 we saw Mitch decide to start his own cattle business after Jack refused to expand their operation. Well, in this episode Jack was finally reconsidering. Mainly because the separation was putting unnecessary strain on Lou and Mitch’s relationship. So much so that Jack asked Mitch to come to Heartland to talk it out.

Tim, of course, wasn’t on board with Mitch being their business partner again. So, when he found out that Jack and Mitch were fishing, Tim quickly went to them to make his thoughts known. And since Lou couldn’t believe that Jack, Tim, and Mitch were hashing things out in the middle of the final days of her campaign she went after Tim.

On top of that, Peter was back in town, too. And seeing how exasperated Lou was, he followed her as well. So, what started out as a friendly chat between Jack and Mitch quickly turned into a big blowout.

Tim was accusing Jack of going behind his back by reaching out to Mitch. And accusing Mitch of not helping Lou with her campaign. Mitch was saying that he doesn’t want to be in business with somebody like Tim anyway. Lou was trying to stop their arguing. And Peter being there complicated things even more.

The new Mayor of Hudson

So, in the end, Peter and Mitch ended up in an argument about Lou and who was there for her more. Which was stopped by Lou telling them that none of them knew what she needed right now and then storming off. Add the stress of Remi getting hurt and then Amy and Ty getting shot and Lou was really feeling the pressure.

Fortunately, the family rallied around Lou. And with a little push from Tim Lou even went to the final campaign meeting and gave a beautiful speech about keeping her family and her town safe from J. D. Werth.

And although at first, it seemed like Lou might not win after all, since the initial results showed J. D. in the lead. Once all of the votes were counted it was official, Lou Fleming was the new Mayor of Hudson.

Sadly, it seems that Mitch might not be part of her new life. Because after the blow-out by the pond and after Lou didn’t mention that she’s a girlfriend in her final speech (see below) Mitch realized that he and Lou might not be it for each other after all. And the episode ended with them telling one another that they should figure what it is that the other really wants.

So, it seems like despite a great season together, the will-they-won’t-they dance between Mitch and Lou will continue should there be a fourteenth season (fingers crossed!).

Only if you want me to

Lastly, when we talk about Heartland season 13 episode 10 we can’t forget to mention how the storyline between Georgie and Quinn ended. After all, at the end of the previous episode, we saw Georgie make the long drive to Kelowna where Quinn was competing in a showjumping event.

During the first half of this episode, we saw Georgie finally arriving in Kelowna and pouring her heart out to Quinn. She even admitted to him that she was in love with him. Yet, Quinn’s reaction wasn’t what Georgie had hoped for.

Although he admitted that he was happy to finally hear Georgie say that she loved him, he still left to collect his second-place ribbon without so much as “wait here” or “I love you, too”. Which made Georgie realize that her big gesture was for nothing.

So, Georgie went back home brokenhearted.

Luckily, her parents were there to comfort her. But just as we thought that the storyline was over, Quinn suddenly showed up at Maggie’s, where Georgie and the rest of the family were waiting for the election results. 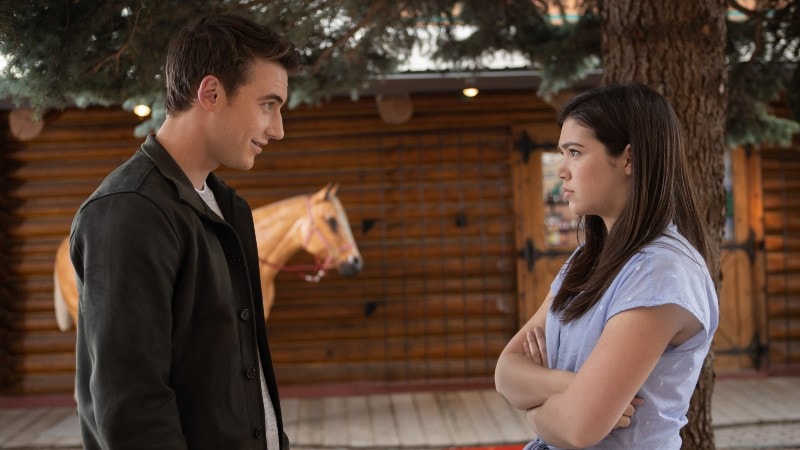 Georgie, of course, was surprised and apparently a little jealous after seeing Quinn and a teammate being friendly back in Kelowna. But the two managed to hash things out. Quinn even admitted that he’s been offered a job here in Hudson. A coaching position at Hillhurst Stables. And that he’s going to take it, but only if Georgie is okay with that.

And we didn’t have to wait long for Georgie to kiss Quinn in answer to his plea of her just having to give him one reason to say.

So, by the end of the episode, Georgie and Quinn were more solid than ever. And Tim even gave him a nickname – Golden Boy. Which, if you know anything about Tim and the men that his daughters’ date, means a good thing.

Heartland season 13 episode 10 was truly a rollercoaster. But despite everything that happened during the episode, my favorite moment probably was when Georgie was pouring her heart out to Quinn.

Alisha Newton gave such a stunning performance that truly made me feel everything Georgie was feeling at that moment. Which in return made that scene my favorite one from the episode and maybe even from the whole season.

Which was your favorite moment from the episode and from season 13? Sound off in the comments below. I’d love to know!

Lou: “The message of my campaign has always been about integrity. It’s been about moving forward with the kind of progress that honors the values and the traditions of our town. It’s been about protecting what’s important to us and to our families. To say that I’m from a big family would be an understatement. I’m a granddaughter, a daughter, a mother, a sister, an ex-wife. My family is big and it’s definitely not free from conflict. But I am nothing if not loyal to my family. And that family includes this town. And when someone threatens that family, tries to hurt them, tries to take them down you can bet that I will be there and ready to fight. J. D. Werth is that threat. To my family and to my town. And I promise that I will do my best to defend us to the end. So, thank you for being here with me today and for helping me to realize that this is not only what I want to do but I have to do.”