We are now leaping towards the finish line when it comes to the end of the thirteenth season of Heartland. But before we get there, there was one more lovely episode for us to enjoy. Filled with personal revelations and sweet family moments. Want to know what exactly happened? Then keep on reading this Heartland season 13 episode 9 recap!

Looking for the right horse

When it comes to the main horse-related storyline of the episode, this time they kept it close to home. Because, as I predicted in the recap of the last episode, this episode had a lot to do with Spartan and Amy trying to come to terms with his age.

At the start of the episode, we saw Amy and Georgie take Spartan for a walk seeing that his leg was still healing. And during their walk, Georgie tried to sell Amy on buying Atlas, one of Fairfield’s horses. But Amy quickly shot down Georgie’s idea, saying that she wasn’t looking for a new horse.

Yet, Georgie didn’t give up. Even after Lisa told her that although Georgie could bring Atlas to Heartland she also shouldn’t expect Amy to want to keep him. So, Georgie gave it her best shot and pitched Atlas as the perfect horse for Amy.

And, although at first, Amy told Georgie that she was not ready for a new horse. After a while, Amy came to realize that it might just be time to take some of the pressure off Spartan and to get another horse that could do most of the heavy lifting. So, she thanked Georgie for pushing her on this. And later the two went for a ride during which Amy realized just what she should do when it came to getting a new horse.

Instead of just buying Atlas from Lisa, Amy decided to gentle one of the wild horses that were living on their property. The one she was going to gentle for Sam back in episode 2, in fact. Since the colt bonded with Spartan and Amy took that as a sign that Spartan might be trying to tell her that the colt is the right horse for Amy.

When something feels right

Speaking of Georgie, the reason why Georgie was pushing Amy so hard to buy Atlas was because of Quinn. She needed a distraction since Quinn was just one province away in Kelowna at a horse show. And Georgie couldn’t seem to stop stalking him on the internet. 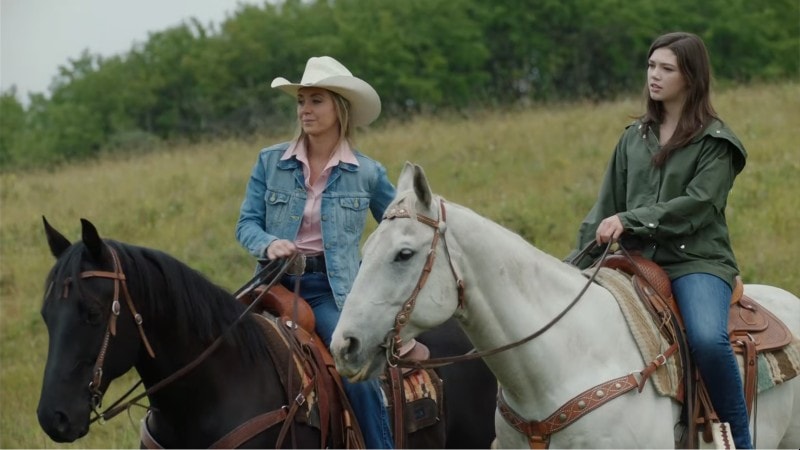 But after a chat with Amy about what Georgie should do. During which Amy replied to Georgie’s question about how do you know when somebody’s right for you with: “When something feels right, you have to at least try.” Georgie decided to drive to Kelowna to see Quinn. After all, Georgie realized that her decision to ask Quinn to leave wasn’t the sensible thing to do, it was just the safe thing to do.

So, it seems like in the season 13 finale we will see Georgie confront her feelings for Quinn head-on. And hopefully, there will also be a happy resolution to this storyline.

Last week’s episode left off on a high note with Lou announcing her run for the Mayor of Hudson. Which means that in this episode we saw Lou doing just that. But it definitely came with a lot of challenges.

Not only did she have to deal with Tim as her campaign manager. But her competitor J. D. Werth definitely wasn’t playing by the rules.

First, he tried to intimidate Lou by telling her that her being up in the polls was temporary and insinuating that Lou running for Mayor basically meant that she’s a bad mother. However, when Lou didn’t bite Maggie’s suddenly got a complaint from the health department about the cleanliness of their kitchen. Tim got a letter in the mail about how according to Hudson county bylaws he can’t live in his RV for more than six months. Even if the RV is parked on private property. And Werth even went after Lisa, Jack & Tim and Mitch’s businesses.

Apparently one of the investors that Lisa had brought in to help with Fairfield’s cashflow issues was Werth Developments. And now Werth was asking for the money back. While in the case of Jack, Tim and Mitch’s companies, J. D. was threatening both of their deals with Garand Foods. That got Lou rethinking her participation in the mayoral race. And she even dropped out for a second.

Yet, some encouragement from Mitch and news from Ty got Lou back into the race and more determined than ever to become the new Mayor of Hudson.

At the start of the episode, we saw Amy and Georgie come across a wolf while they were out on a walk with Spartan. And then Ty had to go into the clinic to help Scott treat animals that had come into contact with a cougar and the multiple wolves that were in the area. Which got everybody spooked. So much so that Amy decided to keep Remy indoors for the time being.

And as it later turned out, there was a reason why so many wolves and cougars were in the area. According to Bob, a new fancy housing development was being built near a major wildlife corridor. Which meant that prey animals fled their normal habitat to an area near Hudson. And, surprise, surprise, Werth Developments was responsible for the project.

So, Lou quickly got to work and soon an article appeared at the front page of the Hudson Times about Werth’s part in wildlife coming near people’s homes and attacking their animals. That definitely turned voters in favor of Lou. Which really showed, since Maggie’s was full of volunteers ready to help Lou win the election.

Will she win, though? Hopefully, we will see in the next episode, since it’s the final one of the season!

Ready to go back

Finally, Georgie’s pushiness and wild animals weren’t the only problems Ty and Amy had to deal with on Heartland season 13 episode 9. Because this was the episode when Luke was going back to live with his mom.

During the episode, we saw Ty and Amy meet with Clint who told the couple that since Andrea was making tremendous progress, he was ready to place Luke back with his mom this weekend. And, although Amy and Ty were a bit shocked about the fact that Luke was leaving so soon, they knew that this is the best thing for Luke. 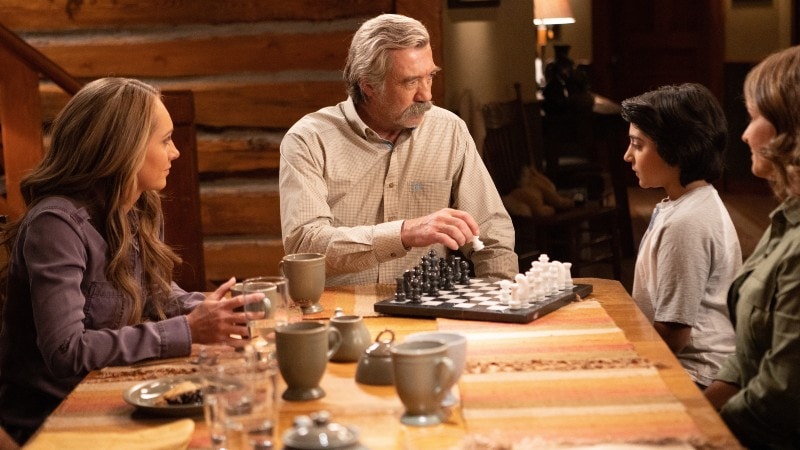 Which is why on Friday evening after the nightly family dinner Amy, Ty, Jack and the rest of the family gave Luke a farewell gift. A brand-new chess set. Along with some words of wisdom (the quote that you can read below). But they weren’t the only ones who had a gift prepared.

Luke was ecstatic when he found out that he’s moving back in with his mom. But after he had some time to process it, the thought of leaving Heartland also upset him. After all, it meant that he wouldn’t see Boots or everybody else on day to day basis. Thankfully, Jack was there to comfort Luke and to tell him that he was always welcome in Heartland. After which Luke asked Jack’s help with a gift for Amy and Ty.

So, when it came time to pack up Clint’s car and leave, Luke handed the gift to Amy and Ty asking them to open it at the new house. And, Amy and Ty did just that. Opened Luke’s gift next to their new home revealing a beautiful picture frame with a photo of Amy, Ty, Lyndy and Luke inside. A beautiful ending to a beautiful storyline.

It was interesting to see how this episode brought to light some relationship woes that Lou and Mitch had yet to work out. Especially the one about them not consulting the other when making huge life decisions. Like Mitch deciding to buy the herd and create his own cattle business in episode 6. And Lou deciding to run for Mayor in episode 8.

And although at first, it created a rift between the couple. Eventually and with a little help from Tim, the two managed to work through their differences. Which hopefully means that it’s smooth sailing from here on out for them. After all this season the couple has overcome way too many big problems for them not to come out stronger on the other side.

Finally, at the very end of the episode, we saw J. D. Werth hand a man an envelope of cash and ask him to take care of the wildlife problem. And it looked super shady. Which made me wonder if Lou will win the election after all. I’m, of course, rooting for her, but with an opponent like Werth, you can never know.

Jack: “Luke, always take care of the ones you love.”
Lisa: “And wherever you go, you take a piece of this place with you. Keep it close to your heart, okay?”
Lou: “Don’t be afraid to take a risk every now and then. Even if it scares you half to death.”
Katie: “I’m totally moving up to the loft one you leave. But I’m really going to miss you.”
Tim: “Luke, try to let Jack win a couple of games. It’s good for his ego.”
Georgie: “Luke, your mom is your family and now so are we. And families always stick together no matter how far away they are.”
Amy: “Your life may change a lot but you’re always welcome here.”
Ty: “It’s true. So, you come visit us, okay? And remember to breathe.”
Luke: “Thank you so much. I love it! It’s perfect.”
Jack: “So, are we going to play or what?”
Luke: “Yeah, let’s play.”
Jack: “Alright. And don’t you dare let me win.”

And for the last time this season here’s your first look at the next episode aka the Heartland season 13 finale titled “The Passing of the Torch”: