Everyone has an idea of what the perfect society should look like – whether it’s with unlimited resources, a fully functional government, equal distribution of wealth, world peace, or what have you. Maybe it’s a world where our pets live as long as we do because in the world of fiction, anything can happen, right?

But nobody really likes to talk about the best imperfect community. In fact, thinking about this has probably never even occurred to most people. I mean, who wants to actively think about how we would live in a depressing, dehumanizing, and chaotic society? That topic’s bound to kill any conversation even at the liveliest of parties. However, the dystopian concept is certainly pretty popular in the entertainment business, particularly in books, movies, and TV shows.

According to Masterclass, there are five characteristics of dystopian fiction: government control, environmental destruction, technological control, survival, and loss of individualism. In a nutshell, this means there is either no government or an incredibly oppressive one, technology is used as a control or fear-mongering device, the physical environment is uninhabitable or destroyed, people are left to fend for themselves, and we are all practically brainwashed to conform.

Now that is a future that no one wants to envision, but is absolutely fascinating to see play out on the big screen.

Movies like The Hunger Games trilogy, the Divergent franchise, the Maze Runner trilogy, Blade Runner 2049, The Giver, The Matrix, and the Mad Max movies are just some examples of the dystopian fiction being used in the Hollywood industry.

When it comes to the small screen, there are plenty of shows that have dystopia as the central theme. And that’s exactly why we’re here! What better way to see what a dystopian world would look like than to see it play out right before your eyes, right?

So, we’ve put together a list of the best dystopian TV shows out there! 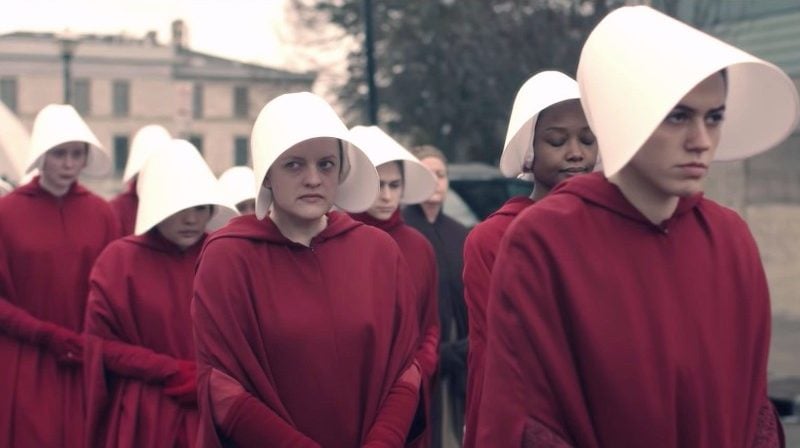 Based on Margaret Atwood’s 1985 novel of the same name, Hulu’s The Handmaid’s Tale takes place after an American civil war that resulted in the government of Gilead: a controlling, totalitarian society ruled primarily by divine law. Harkening way, way back to the days where women were treated as second-class citizens, their roles in society were limited to the point of, essentially, slaves, and divided into “classes”.

The group referred to as the Handmaids were assigned to a wealthy family from the upper echelons of the community. These women were regularly raped by their “masters” in order to bear a child.

The Handmaid’s Tale primarily follows the story of June Osborne and narrates the brutality she endures as she attempts to reunite with her husband and daughter.

All three seasons are available to stream on Hulu. With the fourth season currently in production. 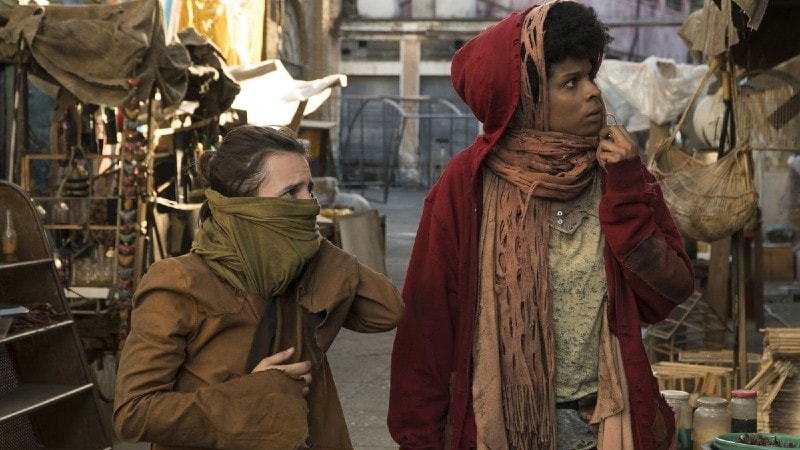 3% is set in an unspecified future in São Paulo, Brazil, where there’s an annual tradition called the “Process” that every citizen of the poverty-stricken “Inland” who has recently turned 20 can volunteer for.

The Process involves a series of challenges designed to test the participants’ physical and psychological capabilities. Those who succeed can move onto the “Offshore”, where they are free to live an affluent life in paradise. However, only 3% are likely to survive the Process.

Though it is similar in premise to some of the young adult novels-turned-movies in the genre, The Verge highlights the rare glint of hope Netflix’s 3% provides with the idea of paradise. Something that is usually absent in the misery of the dystopian genre.

Catch the first three seasons on Netflix, before the fourth and final season is released!

The Man in the High Castle 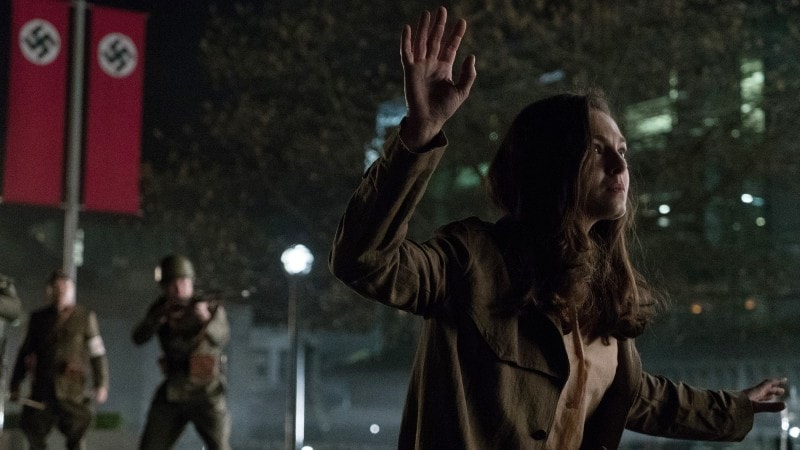 This time set in the early 1960s, Amazon’s The Man in the High Castle explores an alternate history and tackles the question: “What if the Axis powers won World War II?”

It’s a pretty terrifying premise that sees the United States’ east and west coasts becoming the Greater Nazi Reich in the east, and the Japanese Pacific States in the west. As you can imagine, there’s still a lot of political and civil unrest amongst both parties.

The Man in the High Castle also uses the idea of parallel universes and is first revealed through a series of newsreels created by the mysterious figure that inspired the series’ title, all of which contain various other histories, including the one that we are living today. Eventually, the mere existence of these parallels evolves into traveling between them as well.

All four seasons of this dystopian series are available for streaming on Amazon Prime Video. 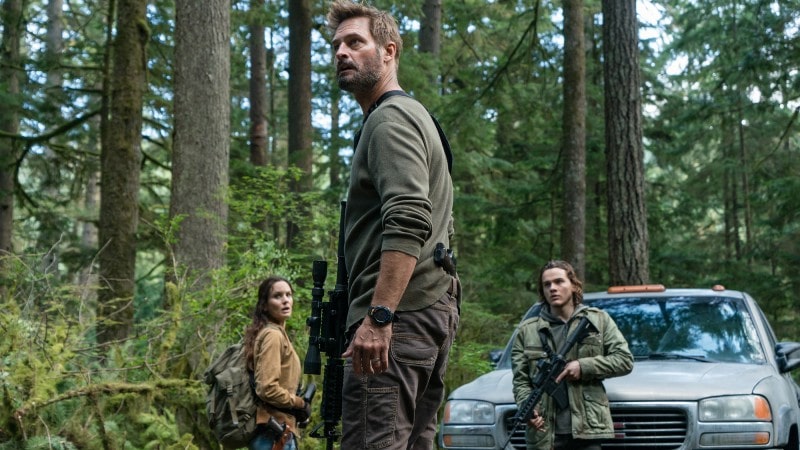 In USA Network’s Colony, we meet the Bowman family and follow their story of resistance and survival over three seasons.

After a mysterious alien race occupies Earth, citizens are forced to live under a military regime where its leaders answer to an even higher authority known as the “Hosts”. Los Angeles is divided by walls into “blocs”, and the militarized police enforce the rule of law through surveillance, curfews, identity checks, limited use of vehicles, visual propaganda, and slave labor.

Will and Katie Bowman do their part to contribute to both sides of society: the ruling government and the resistance. Through it all, they are fighting to reunite and keep together their family: young Gracie and Charlie – who was separated from them when the dividing walls came up, and teenage son Bram.

Colony was canceled after its third season, but you can stream it all on Amazon Prime Video or the first season on Netflix. 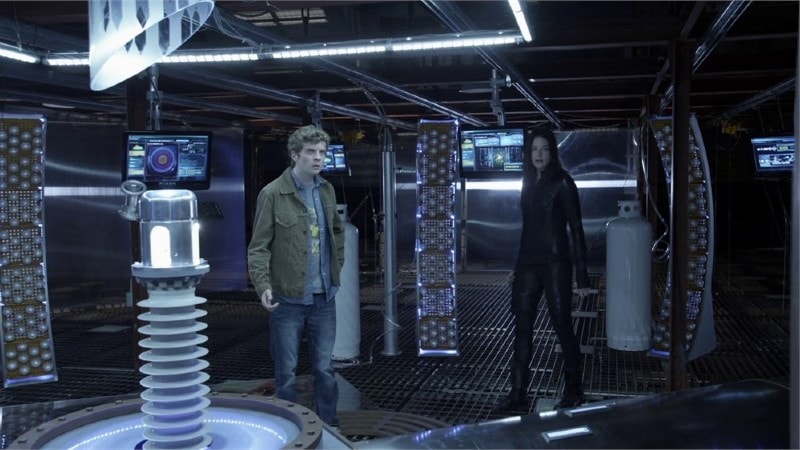 Continuum is a healthy mix of dystopia and science fiction, yet a rarity in that’s it’s primarily set in more recent years: 2012, to be exact. However, its main characters are from 65 years in the future. In their present – that is, the year 2077 – Vancouver is under a corporatocratic rule, where a small group called the North American Unions and its Corporate Congress are in charge.

A rebel group called the Liber8 escape through a time machine and accidentally bring Kiera Cameron, a law enforcement officer, with them. When Liber8 arrives in 2012, they begin a violent campaign in an attempt to stop the rise of corporations as the ruling class. Kiera teams up with a present-day detective and a young computer genius to try and stop them, all while hiding their time-traveling secret.

Sadly, Continuum was canceled after 3 seasons by Showcase. Though it was given a six-episode season four to fully wrap up the story. 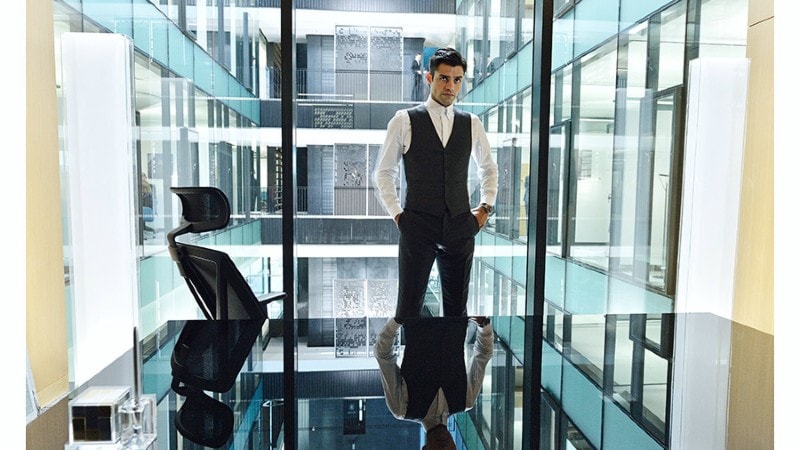 Another attempt at depicting an oligarchic, corpocracy came in 2017 with Incorporated, a Syfy original dystopian series. While there’s no correlation between Incorporated and Continuum in terms of timeline or shared universe, the underlying premises of both shows are quite similar.

In Incorporated, we find ourselves in 2074 Milwaukee, where powerful corporations have become de facto governments ruling territories called Green Zones. The protagonist Aaron Sloane is working undercover as Ben Larson, a manager at one of the largest corporations in the world. His goal is to climb further up the ranks of the company in order to find and rescue his childhood love Elena, who works as a high-end escort for the company’s executives.

Though it received a 75% on Rotten Tomatoes and was nominated for Best Science Fiction Television Series at the 2017 Saturn Awards, Incorporated was canceled after just one season due to low viewership. 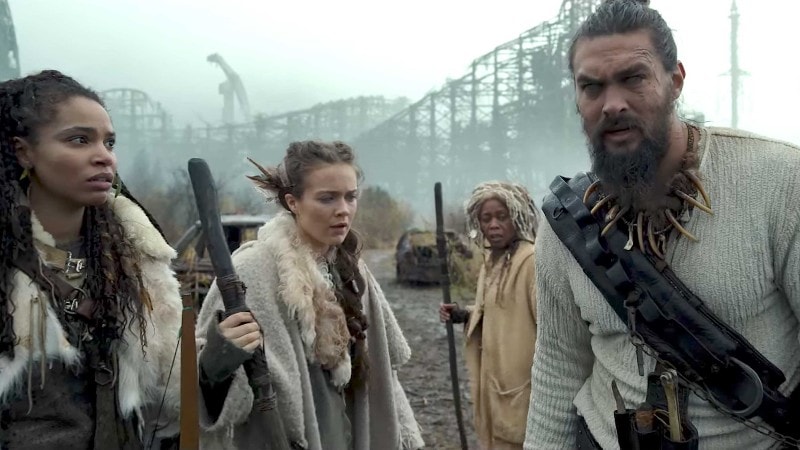 At first glance, See seems to be set some hundreds of years in the past. The characters are in fur and leather garb, their weapons look handmade, and there’s absolutely no trace of any advanced technology.

But don’t let that fool you! See is actually set in a very distant future where a mysterious virus has wiped out all but 2 million of the Earth’s inhabitants and promptly removes their ability to see.

As humanity evolved to survive through the other senses, people have settled into small villages and take on roles depending on which sense is strongest. However, their life is turned upside down when Baba Voss, the leader of one tribe, falls in love with a pregnant woman whose twins have the gift of sight. This triggers a war amongst neighboring tribes as they all clamor to capture the children.

Season one just wrapped up in December 2019. And the dystopian TV series has already been renewed for a second season by Apple TV+. 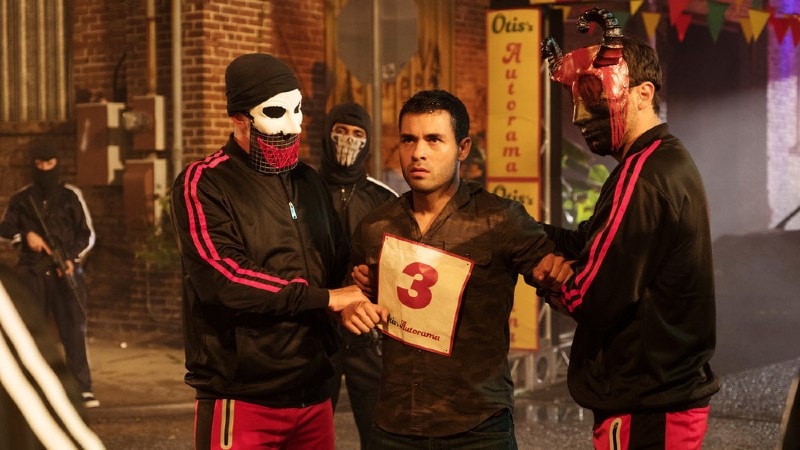 If you’ve seen any of the movies in The Purge franchise, then you’re already familiar with what the central storyline is. If you haven’t seen the movies, however, first ask yourself this: if you could commit any crime without any repercussions, what would you do?

USA Network’s The Purge series ties into the films in that the United States is now ruled by the New Founding Fathers of America under a totalitarian regime. Every year there is a 12-hour period wherein all forms of crime are legal: what they call Purge Night. Class 4 weapons and below are authorized, high-level government officials are immune, and all emergency services are suspended during The Purge.

The first two seasons of The Purge series follow seemingly unrelated characters as they go through Purge Night and as it ends, the consequences and controversies that lead up to the next purge.

Fans can stream The Purge on Amazon Prime Video. 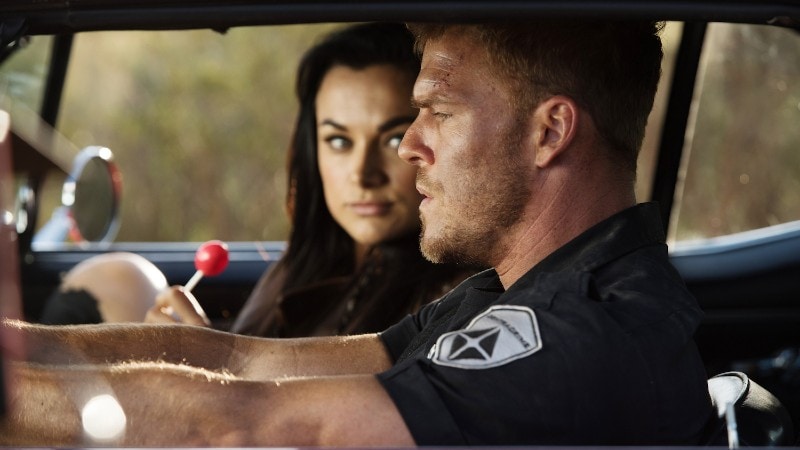 Blood Drive is set in an alternate 1999 “future” Los Angeles, in a world where the United States is literally ripped apart due to the “Great Fracking Quakes”. It touches on environmental issues – such as fracking and its consequences – and paints a picture of scarcity in both water and oil. Unsurprisingly, a ruthless megacorporation (ironically called Heart) stands at the helm of practically all aspects of the American society.

Arthur Bailey, the “last good cop” in the city, teams up with the dangerous Grace D’Argento to take part in a dangerous underground car race, the titular Blood Drive. In case the name didn’t tip you off, the cars in this death race literally use human blood as fuel.

Trigger warning: there’s a fair bit of violence in SyFy’s Blood Drive so if grindhouse TV isn’t up your alley, you should consider skipping this one. Otherwise, binge watch the first (and only, unfortunately) season on Syfy or Amazon Prime Video! 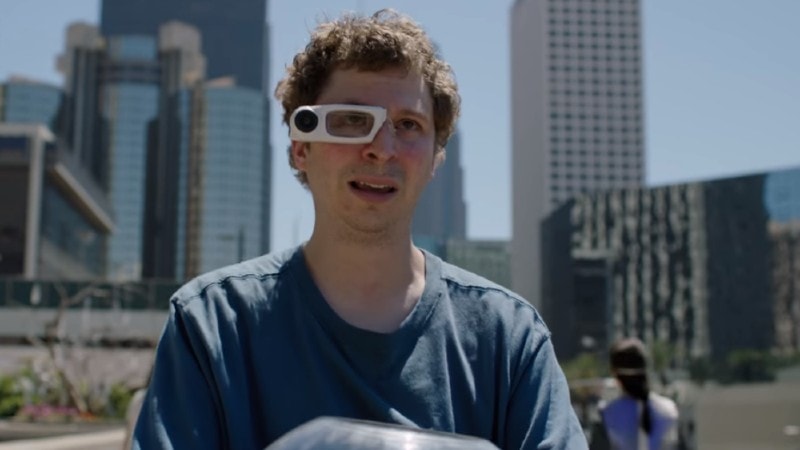 Structured somehow like an anthology series, each episode features a different character who is just trying to navigate their lives around the city of Weird. From an accidental match on a dating service to a The Truman Show-esque situation for a pair of criminals, Weird City is a comedic relief and palate cleanser from the misery of the dystopian genre.

All six episodes of the first season are available on YouTube Premium. 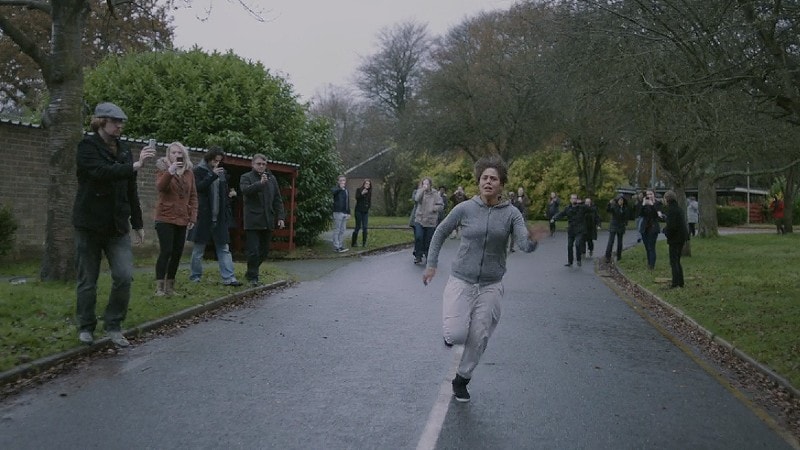 You didn’t really think you could read up on dystopian TV shows without hearing about Black Mirror, did you? Dystopia, after all, is characterized by a frightening or unpleasant society and arguably every single standalone episode of this anthology series leaves you with a slight tinge of discomfort – so much so that it’s almost difficult to watch more than a one or two episodes at a time.

We always think about how technology has been so beneficial and makes our lives so much easier, but Black Mirror really makes you question if that’s really always the case.

More than that, it really juices the brains in thinking about the negative consequences of technology – and boy does it get dark. Luckily, there are a few lighter episodes sprinkled in (I’d personally recommend the “San Junipero” episode!).

Still, despite its generally dark and satirical tone, it’s a must-watch simply because of the creativity, shock value, and eerie parallels to the real world.

Watch all five seasons plus the interactive film, Bandersnatch on Netflix!