Christmas is only a few short weeks away. And you know what that means? Christmas episodes! That’s right, all your favorite TV show characters are celebrating Christmas. And we get to see them do that on TV show Christmas episodes. So to help you get into the Christmas spirit, here is a master list of this year’s TV Christmas specials along with what you can expect to see while watching them. Let’s get started, shall we? 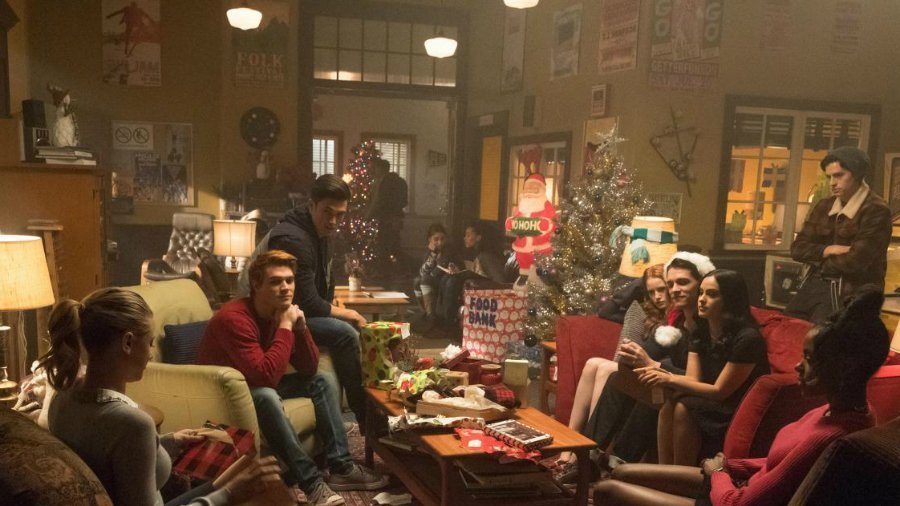 Riverdale is one of The CW’s most popular shows right now. And since the show often features different events and celebrations, you know that the Riverdale gang will be celebrating Christmas this year as well.

What can we expect from the Riverdale Christmas episode? According to the synopsis of Riverdale season 2 episode 9 (aka Riverdale season 2 winter finale) that was recently released by The CW, the episode will feature a showdown between the Black Hood and Betty and Archie.

On top of that, we can also expect some Lodge family drama, with Veronica uncovering a huge secret that her father has been keeping from her. Some Blossom family drama with Cheryl not accepting the fact that her family can’t really afford Christmas. As well as some Jones family drama, when Jughead’s father isn’t happy that his son got involved with Penny Peabody. Sounds like the Riverdale Christmas special will be full of the usual Riverdale dramatics with just a splash of Holiday cheer. Will you be watching on Wednesday, December 13? 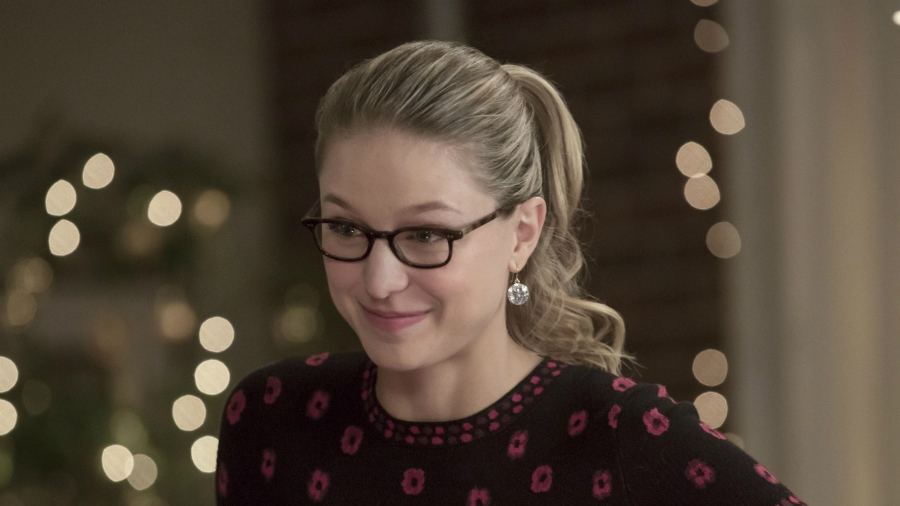 Another show that will be adding its Christmas-themed episode to this year’s Christmas TV schedule is Supergirl. Similarly to Riverdale, Supergirl season 3 episode 9 will not only be slightly Christmassy, but it also is the show’s mid-season finale, so you can count on it being intense and ending on a cliffhanger.

As the title of the episode suggests, it will be all about Samantha Arias and her alter ego Reign. Because according to the summary of the episode, Kara will be investigating an ancient symbol that will show up in National City, and it will lead her to discover the prophecy of Reign, the World Killer.

Additionally, we will see more of the rivalry between Lena and Morgan Edge. Which will lead to James having to intervene, and that will have some interesting consequences. Doesn’t that just sound exciting? Can’t wait for the episode to air on Monday, December 4! 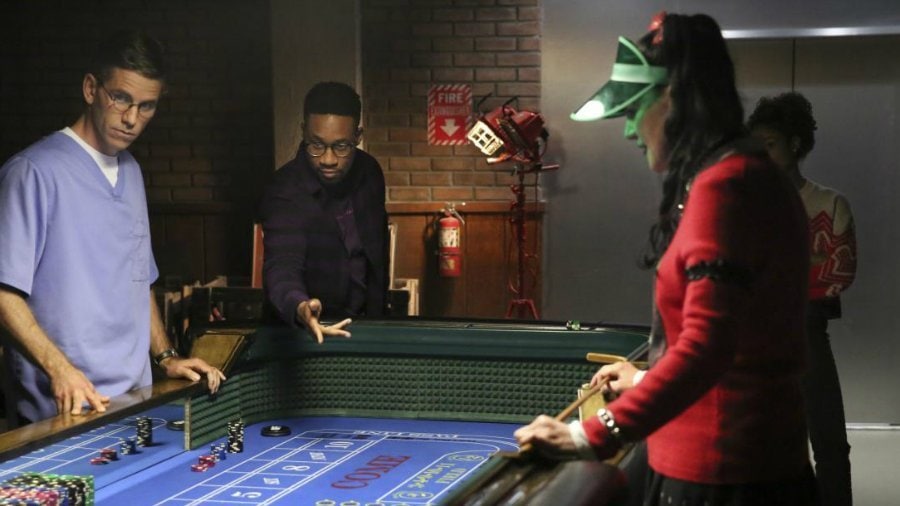 Since NCIS is already in its 15th season and it doesn’t look like the show is ending anytime soon, from experience I can already tell you that there always is some kind of Christmas-related episode. And this year is no different because NCIS season 15 episode 10 will have a bit of Christmas theme.

The summary of the episode tells us that in it we will see Sloane and Torres providing protection for a U.S. Senator, who is visiting the troops in Afghanistan for the holidays. Only to end up having to return to the U.S. earlier than planned, after the senator’s son ends up in the hospital. Meanwhile, Gibbs, Bishop, and McGee investigate the situation stateside. So, although the episode doesn’t sound terribly Christmassy, have no fear, once the episode airs on Tuesday, December 12, you will get to see plenty of Christmas-themed elements in it. Especially, if Abby has any say in it. 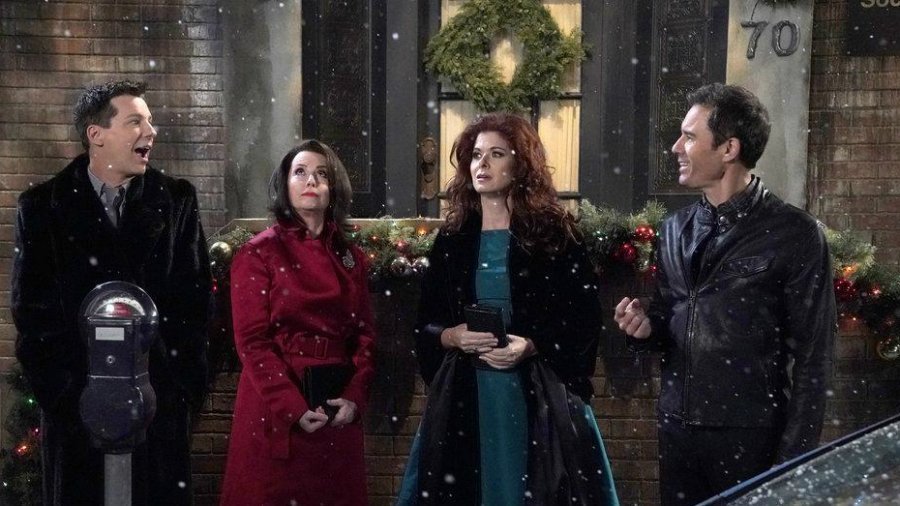 According to NBC, some Christmassy time traveling magic. Since the episode will show Will, Grace, Jack, and Karen experiencing Christmas in early 20th century New York. Only to realize that that time in the US history wasn’t the kindest when it comes to diversity. This Will & Grace Christmas adventure definitely sounds fun! So don’t forget to tune in on Tuesday, December 5. 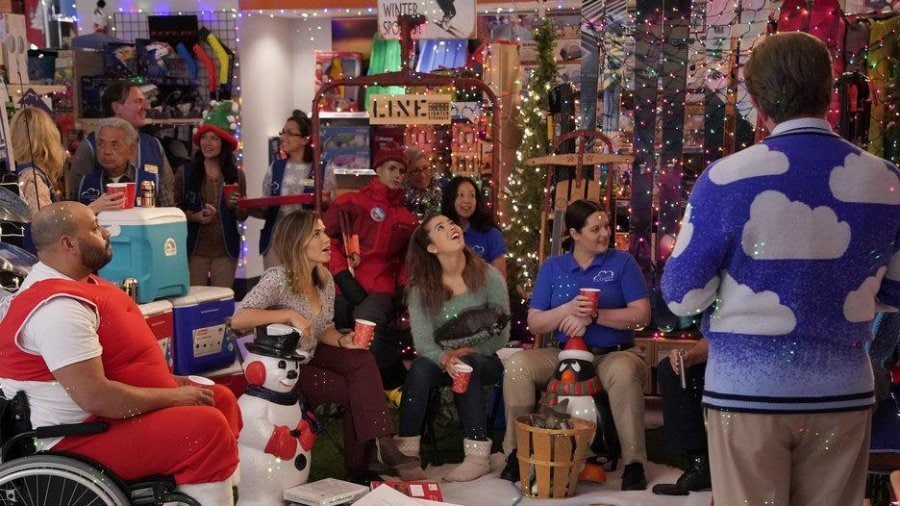 Since NBC is promising the night of December 5th to be their Comedy Christmas celebration night, right after Will & Grace’s Christmas episode, Superstore will also be celebrating Christmas in their own unique style.

Meaning that on Superstore season 3 episode 7 you can expect to see a whole lot of Holiday cheer. But more than that, the episode promises to show Amy turning the Christmas Eve at Cloud 9 into something spectacular. While Garrett and Jonah will be continuing to deal with roommate issues. And Glenn will try to convince Mateo that Christmas isn’t just some “meh” holiday. Want to see all this unfold? Watch NBC on December 5 at 9:30. 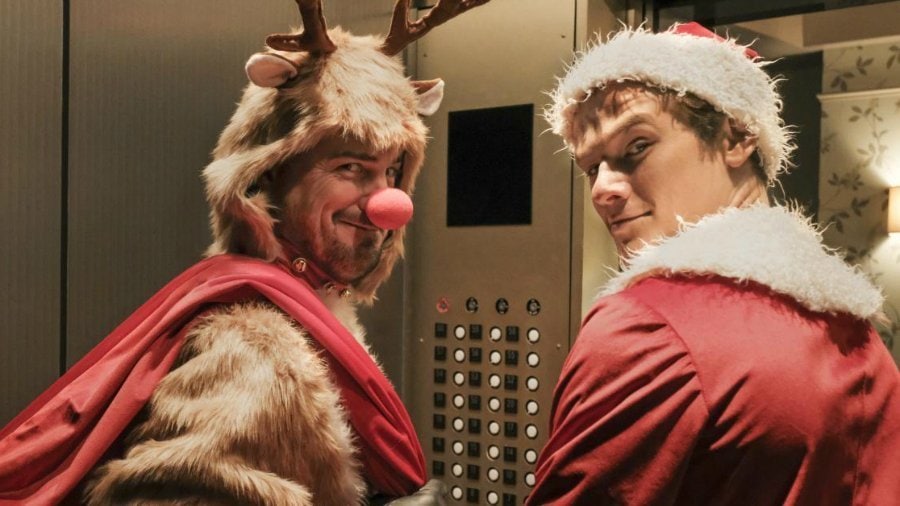 Your Holiday TV schedule also wouldn’t be complete without some MacGyver because this show is also doing a Christmas-spirited episode this year. But of course, in a true MacGyver fashion, the Christmas celebration won’t go as planned.

According to MacGyver season 2 episode 11 synopsis, we can expect to see the Phoenix team celebrating Christmas, when they will be interrupted by LAPD arresting Mac in suspicion of him being a terrorist and bombing a building. And the team will be trying to clear Mac’s name and catch the real terrorist. This MacGyver mid-season finale definitely sounds intense. So you should definitely tune in on Friday, December 15. 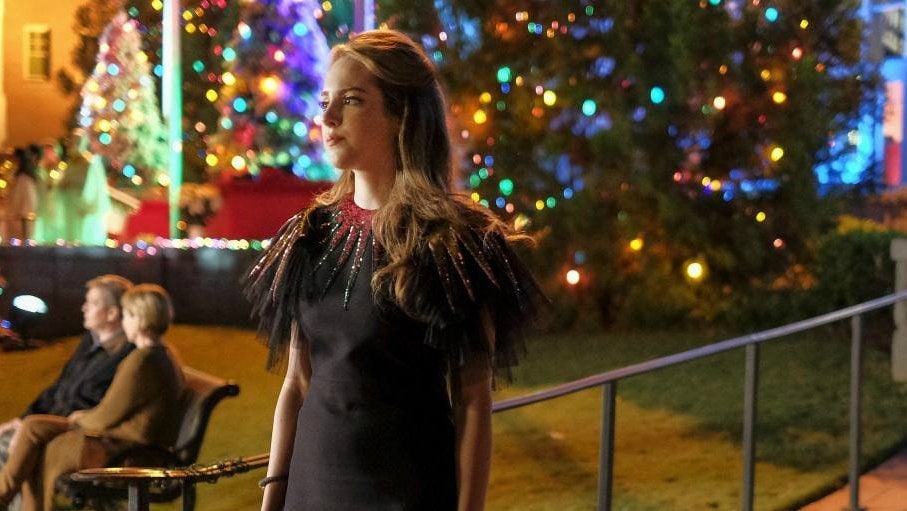 Since the last two pre-Christmas break episodes of Dynasty both air in December, they both will be slightly Christmas-themes. So you can expect to see Christmassy things on both Dynasty season 1 episode 8 and episode 9. But what exactly will these episodes entail?

Well, on episode 8 we will see the lighting of Atlant’s Christmas three. However, of course, the three lighting won’t be just all lights and happiness. Because during the episode (which airs on December 6th) the Carrington family will be dealing with all kind of ghosts from their past. While on episode 9 (airing on December 13th) the Carringtons will be celebrating Christmas. But their peaceful holiday cheer will be interrupted by two scandalous arrivals. Now that sounds like some drama-filled Holiday season! 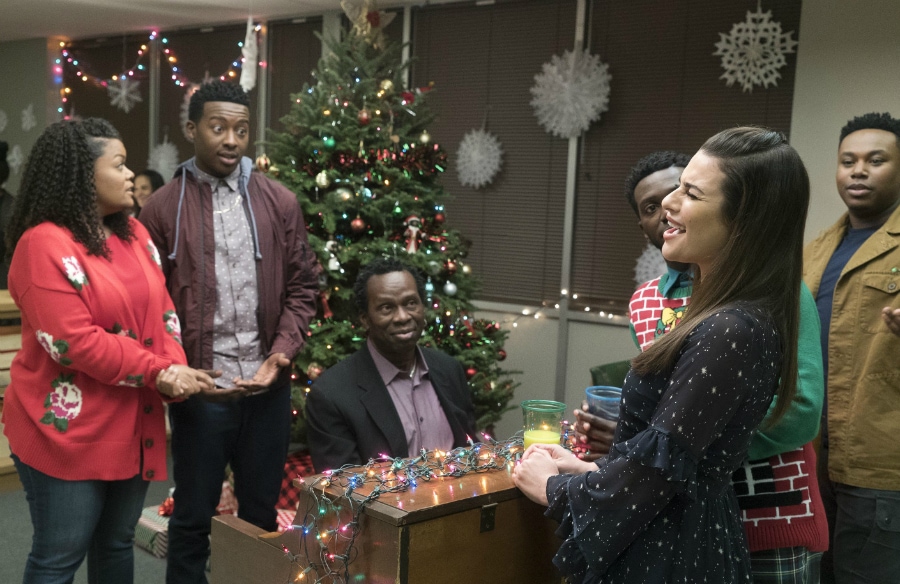 Another comedy TV series that is celebrating the Holidays with a Christmas TV special is The Mayor. Because on The Mayor season 1 episode 9 you will see all kinds of celebratory Christmas things happening.

The episode will depict Courtney wanting to give jolly Christmas to every family in his hometown of Fort Grey. But when he realizes that the town’s budget doesn’t allow his vision to come to life, his friends and family will come together to ignite his Christmas spirit once again and pull off the Christmas miracle he dreamed up. The definitely sounds sweet, yet you can be sure to expect humor in it as well. So will you be watching on Tuesday, December 12? 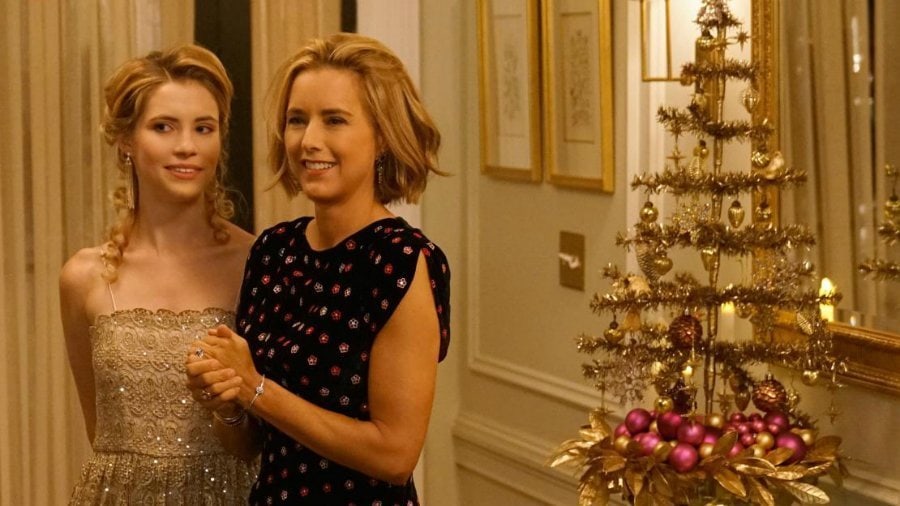 Although after Madam Secretary season 4 episode 9 (airing on December 10) there will be another one in December, episode 9 this year will be the Christmas-themed one. Because it will show Elizabeth hosting a holiday party at her home, hoping to butter up a senator, so he helps her pass a treaty that would require countries to destroy their landmines.

Additionally, during this holiday episode, Henry will continue pursuing the Senate Majority Leader as the traitor. And from the looks of promo photos for the episode, there will also be some singing courtesy of Blake and Daisy. The episode sounds a lot of fun with a splash of politics in it. Don’t miss it on December 10! 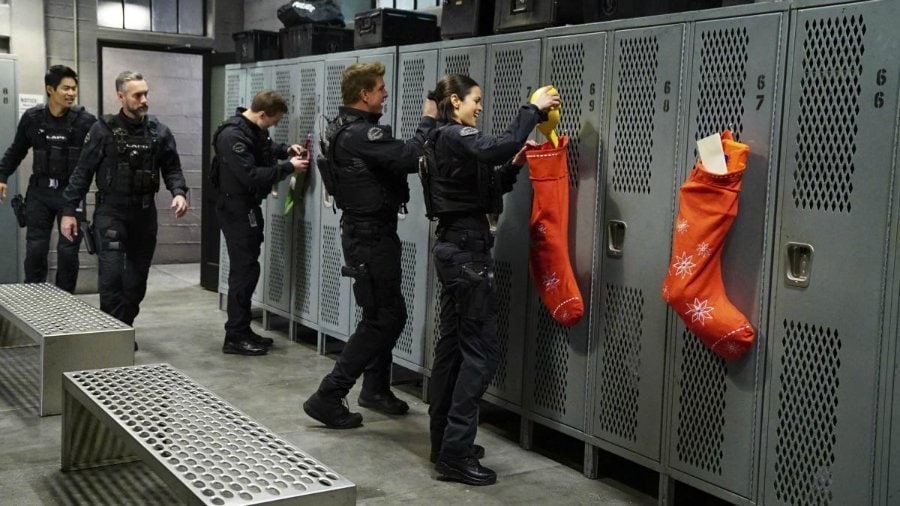 And even a show like S.W.A.T. is doing a Christmassy episode. And it’s great that they are since this is not only the first year the show is on air, but also since the episode airs so close to Christmas (on Thursday, December 21). How does an S.W.A.T.-style Christmas celebration look like?

Well S.W.A.T. season 1 episode 8 will see Hondo and his team being called back to work from their Christmas break after a cartel is starting to reek havoc in L.A. when their gold bars go missing. Additionally, the Christmas-themed S.W.A.T. episode will also explore Jessica and the president of the Police Commission’s relationship. Which means that Hondo might just be getting some competition.  Don’t miss the episode airing on the Thursday before Christmas. It sounds like it will be full of holiday spirit with just a touch of bad-ass! 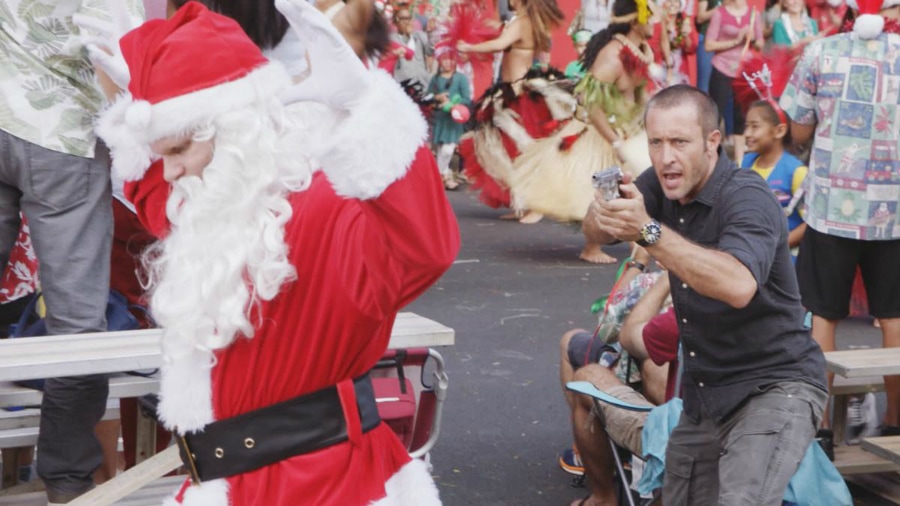 Since MacGyver is doing a Christmas episode, their Friday companion show Hawaii Five-0 is having one as well. And the episode that translates to “A Tall Tree Stands Above the Others” in English will involve Santas, a holiday miracle, and some other Christmassy things.

So Hawaii Five-0 season 8 episode 11, airing n Friday, December 15, will see Danny telling his son a Christmas Eve bedtime story about a case they recently had. And if the above-seen picture is any indication, it will have action and all the other essential Hawaii Five-0 ingredients. But there will also be some Christmas cheer integrated into it. Wanna see Steve take down a Bad Santa? Wath the episode on December 15!

Mom episode 508 “An Epi-Pen and a Security Cat” 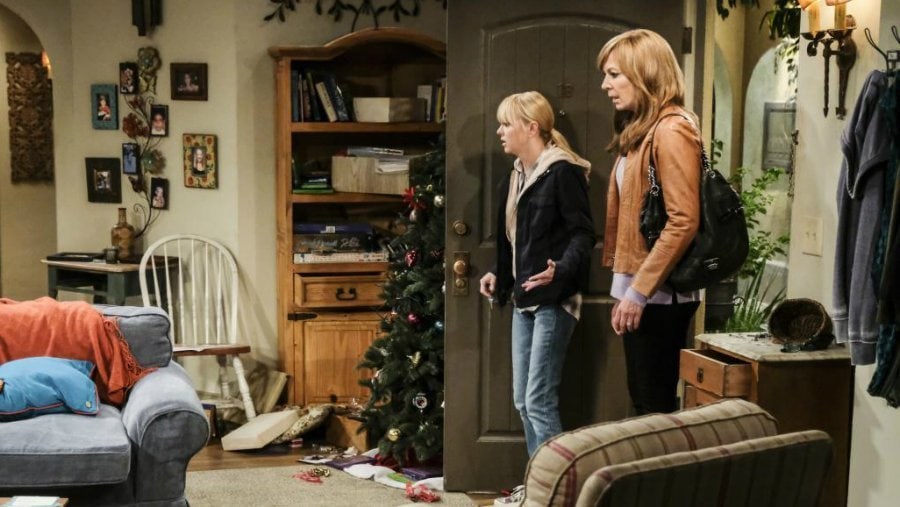 Comedy shows often do holiday-themed episodes because they give the shows plenty of room for comedy. And CBS’s Mom this year is having one as well. The episode airs on Thursday, December 15, and you can expect a lot of chaos and Christmas spirit from it.

Mom season 5 episode 8 summary states that the episode will deal with Christy and Bonnie getting robbed. But when they try to hunt down the thief who took their stuff, they will end up meeting some unexpected people. Sound’s interesting? Make sure you watch the episode then! 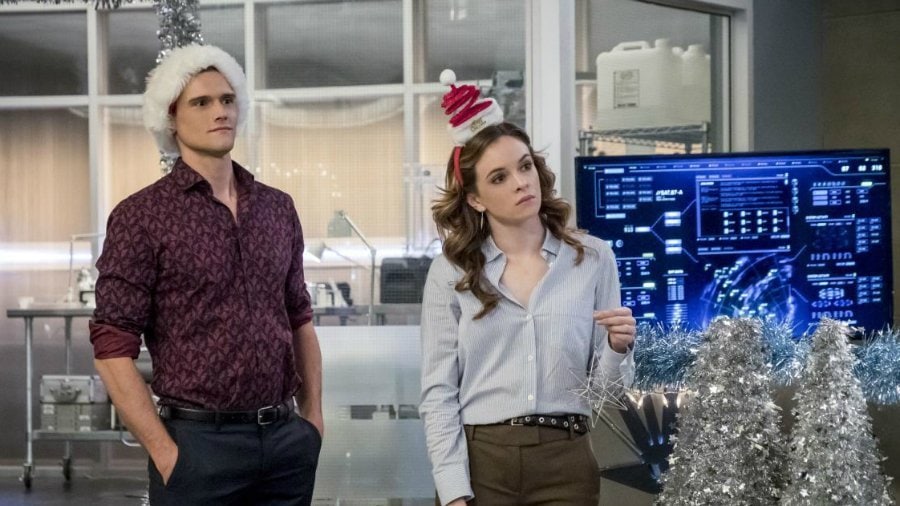 When a Christmas-themed episode is also the show’s mid-season finale, you know to expect some craziness to go down. And that is exactly what you can expect to see on The Flash season 4 episode 9.

The episode will deal with two kidnappings. And Team Flash will have to choose which team member to save. Because both Caitlin and Barry will get kidnapped on this slightly-Christmassy The Flash episode. Caitlin will be taken by Amunet, while The Thinker will trap Barry in a speedster-proof cell. How will all this go down? Watch on Tuesday, December 5 and find out!

Legends of Tomorrow episode 309 “Beebo the God of War” 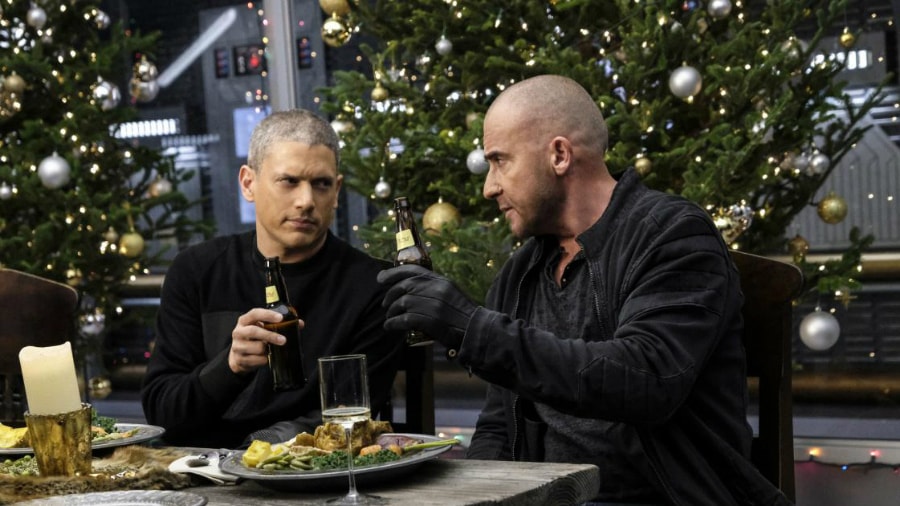 And if The Flash is having a holiday-themed episode, you know that DC’s Legends of Tomorrow will get into the Christmas spirit as well. Because on as we see in the photo above, Mick and Captain Cold from Earth X are having a Christmassy toast. And no doubt the rest of the team will be joining in as well. But what about the main story of Legends of Tomorrow season 3 episode 9?

Well, the episode will deal with Legends investigating a Viking settlement where they learn that the Viking clan are worshipping a toy from the modern times. And you know that action and hilarity will ensue. See this with your own eyes on December 5, when the episode airs on The CW.