Netflix almost never disappoints when it comes to any of its original releases, whether in film or series format.

One of its newest hit sensations is the South Korean survival action series Squid Game (오징어 게임 in the original Korean title) and let me tell you: the hype for it was definitely well-deserved.

The premise is this:

456 people in various states of debt and trouble in their personal lives are invited to participate in a mysterious survival game with six rounds in total, with the promise of a large cash prize for the winner.

Each participant is “worth” ₩100 million and every time someone gets eliminated from the game, their “worth” is added to the prize pool.

That means at the end of it all, the winner walks away with ₩45.6 billion – that’s almost $38 million! They have no idea what games they’ll be playing, but things turn ugly real quick.

Now I love a good dystopian survival series as much as the next thriller genre fan; movies like Nerve and Circle as well as other similar shows like the Japanese Alice in Borderland are right up my alley of interest.

It was only natural for me to want to immediately binge Squid Game – and I did in less than 24 hours. It was that hard to look away!

I came here to talk about all the moments during Squid Game where I almost jumped out of my seat but to be honest, it was pretty hard to stay in my seat in the first place.

Still, there were some points where I was dumbstruck, completely in shock, glued to my screen, the whole shebang. Here are some of the best moments from Netflix’s latest hit, Squid Game!

Disclaimer: These are in no particular order – either in preference or chronology.

Also, in case you couldn’t tell, they will be spoilers!

‘Red Light, Green Light’ was the first round of the game, and it seemed pretty straightforward enough.

Players are only allowed to move when the “it” person (in this case, a giant doll that was creepy enough on its own, to be honest), has their back turned; as soon as they turn to face the crowd, players need to immediately freeze in whatever position they’re in.

We all knew there was gonna be some kind of twist to the games, so were we really surprised when that first gunshot revealed exactly what getting “eliminated” meant?

Maybe not, but that doesn’t mean my jaw didn’t drop in shock.

No mercy, no time to figure out what was happening – just a straight shot to the head.

The chaos and panic that broke out amongst the remaining players was 100% understandable, though it just led to a rainfall of bullets every time one of them moved. 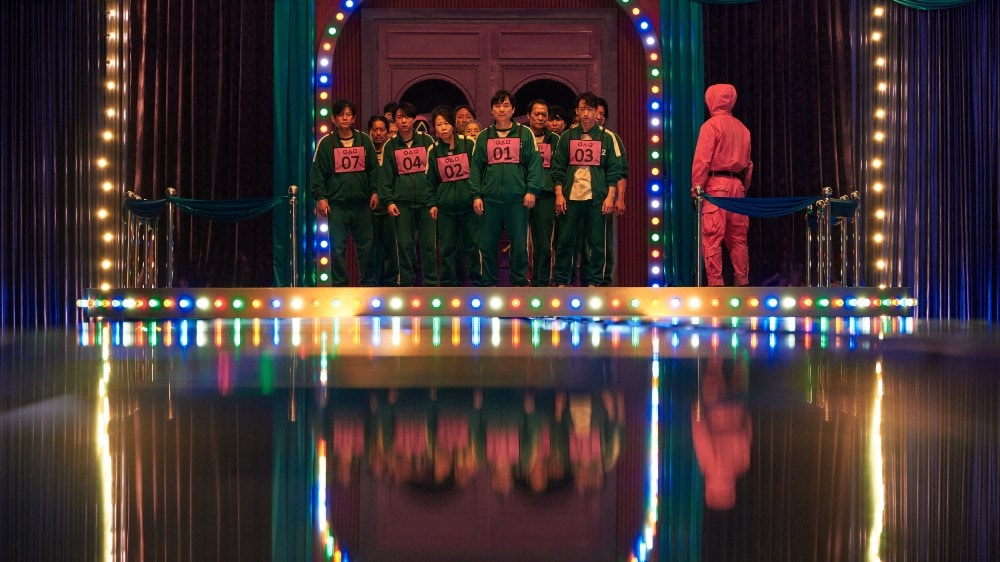 I mean, all six games on Squid Game were all kinds of messed up, there’s no question about that. I don’t know why, but it was this tempered glass one that really had me biting on my fingernails the entire time.

Maybe it was because each step was a 50% chance of survival, or maybe it was the shock value of seeing the glass shatter and the unlucky player just… drop.

So many things happened during this round, too, and it really started to feel like things were coming to a close.

Before the game even started and Gi-hun had to decide between the first and last spot. It ended up being a choice between life and death, and I can’t imagine the stress of having to make this choice without even knowing what the game is!

When the game finally started though, it was definitely the showdown between Deok-su and Mi-nyeo that ended in her sacrifice for the sake of revenge against Deok-su. Indeed, hell hath no fury like a woman scorned.

The reveal of The Front Man

As thrilling as the game itself was, the show’s secondary plotline was just as interesting: that of police officer Jun-ho as he worked behind the scenes to find his missing brother.

Jun-ho went through so much on his personal mission and I was rooting for him the entire time.

It’s a relief that it wasn’t immediately obvious what might have happened to his brother – did he simply disappear with the money after he won? Was he one of the lead soldiers now, maybe one of those trafficking the victims’ organs?

It was only when Jun-ho started getting closer and closer to The Front Man that it became a little clearer.

Still, when The Front Man removed his mask and it hit Jun-ho that it was indeed his missing older brother underneath, it was heartbreaking, especially knowing that his brother pursued him despite knowing exactly who he was and even shot him in the end.

The first twist in the fourth game came when the players were told that their choice in a partner was not so they could compete against other pairs, but that they would be competing against each other.

Suddenly, us, the viewers, were hit with the realization that by the end of the game, half of the players we’d been rooting for will be dead.

Between Sang-woo and Ali, the odds were stacked heavily in Sang-woo’s favor, and yet, considering Ali seemed like a genuinely nice person and Sang-woo’s evil side was starting to come out, most viewers were likely hoping for a way for Ali to still survive this round.

Alas, that’s not how the game works.

Even though it seemed like Sang-woo had found a way to cheat the system, it was actually Ali that he had cheated – a deception made worse knowing that Ali had fully put his trust in him.

That gunshot was, for me, the most heartbreaking one.

Sae-byeok and Ji-yeong’s interaction in the fourth game 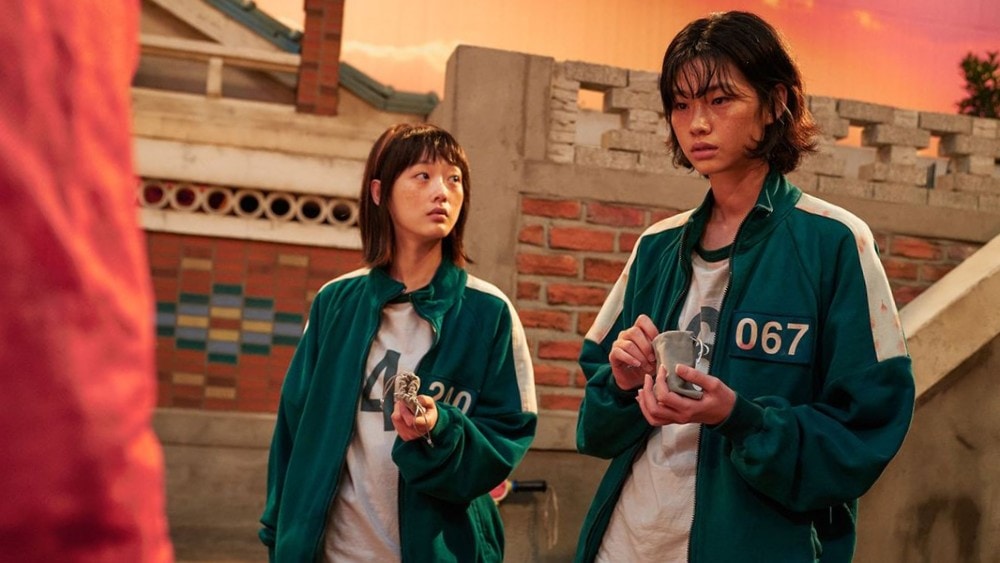 That fourth game in episode 6 of Squid Game was really something else.

Personally, I was nervous throughout the entire episode because of the inevitability of the death of SO many characters because of the rule I mentioned above.

Apart from Sang-woo and Ali, the pairing between Sae-byeok and Ji-yeong was particularly heartwrenching.

Sae-byeok was an early favorite too but as seen with Ali, being a fan fave doesn’t necessarily spare you from a sad and sudden death.

The two women decided to just play one sudden-death game towards the end of their 30-minute time limit, instead spending the time having a conversation about their lives and potential plans after the game.

At the end, it’s clear that Ji-yeong has decided that Sae-byeok deserved to live more than she did, essentially throwing the game away so that she would lose.

When I say I sobbed uncontrollably.

When Gi-hun came home after the game

Gi-hun’s victory was bittersweet, at best.

He walked away with all of that money, but at what cost?

He lost friends he had made while inside the game, not to mention Sang-woo who was practically like a younger brother to him.

After witnessing all of that death and just one bloodbath after another, it’s hard to imagine what kind of trauma he’ll be living with for the rest of his life, too.

Still, at least he has the money now for his mother’s operation and hospital care, right?

Well… That hope lasted for all of 2 minutes before the dread began to set in, beginning when he was asked where his mother was as she hadn’t shown up to her stall in a few days.

And when he finally got to his house and it was all dark, and his mother wasn’t responding when he called out to her? You just knew that she was already dead, and he was too late.

Now this was the twist that really had me sitting straight up.

When Gi-hun received yet another golden card from the woman selling flowers, it seemed like he was just going to be invited to participate again because despite winning, he hadn’t quite turned his life around.

When it was revealed that the card was signed “your gganbu” though, I’m sure I wasn’t the only one whose mind went back through all the episodes to see what signs I might have missed.

The scene between Il-nam and Gi-hun, with the former on his deathbed and still fighting to play one last game with Gi-hun, was a beautiful ribbon to tie up the series. Heartbreaking, but beautiful nonetheless.

His speech really makes one question whether people are inherently good or evil.

Should you always trust that a person will do the right thing? Or will a person’s instinct for self-preservation, despite seeing all the bloodshed, always come out on top?

Squid Game is definitely a 10/10 series – one I recommend to anyone who asks and definitely one that I would watch again in a heartbeat.

Right now, there’s nothing concrete in terms of a continuation with season 2, but the finale definitely leaves room for it.

I mean, will Gi-hun get his revenge and find answers about who the VIPs are? Is Jun-ho really dead?

There are still many questions. And I know I’m not the only one who would love a second season!

Luckily, with the recent reports of Squid Game being Netflix’s biggest debut yet, season 2 might be a real possibility.

So, if Squid Game season 2 does happen, let’s hope the show answers these questions and more!