To an extent, we’ve all come across some mention of the Arthurian legends in some form or another. Whether it’s something we studied in school, read about in a random novel, or seen in a series or film, we’ve all got at least a vague idea of what the legends are about.

The character of King Arthur may be based on an actual historical figure, but those in the legends are entirely fictional. Still, these legends have become such a staple in literature and depict what an ideal society could be, with a just and worthy king ruling over a satisfied kingdom and its people.

The Arthurian legends are jam-packed with elements that we’ve come across at some point. You know the ones – his chivalrous Knights of the Round Table, the love affair between Sir Lancelot and Queen Guinevere, the knights’ search for the Holy Grail, the wizard Merlin’s role in Arthur’s life, and of course, how he comes to possess the enchanted sword Excalibur.

Given all of these facets in the Arthurian legends, it’s no surprise that when it comes to adaptations on the small and big screens, there are never two of the same kind.

There are those with Arthur as the central character, but there are also those where he’s but a blip somewhere along the plotline. Some shows are told from his perspective, others unfold from the viewpoint of the female characters. One thing they all seem to have in common, however, is a little element of magic.

We’ve put together a list of the best King Arthur-related TV shows for both fans of and newbies to the Arthurian legends! Don’t worry, you don’t need to be a medieval scholar to understand these shows, so we hope you enjoy this trip down historical fiction! 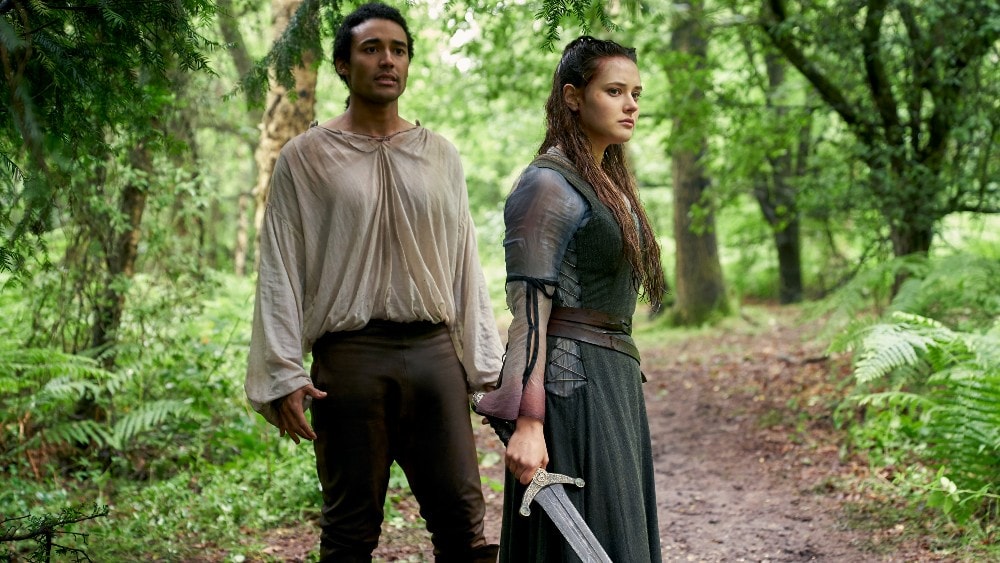 We’re starting off the list with a Netflix original production based on Frank Miller and Tom Wheeler’s graphic novel of the same name.

Cursed is not just a reimagining of the legends but is also told from the viewpoint of Nimue, a Fey woman with mysterious and strong powers that are linked to her destiny as Fey Queen and the fabled Lady of the Lake.

When the Sword of Power comes into her possession, Nimue embarks on a journey (aided by young Arthur) to find Merlin, who seeks to destroy the sword and the dark power that it holds within.

Along the way, however, Nimue inevitably becomes a beacon of rebellion against the Red Paladins who are seeking to persecute her and her Fey people. 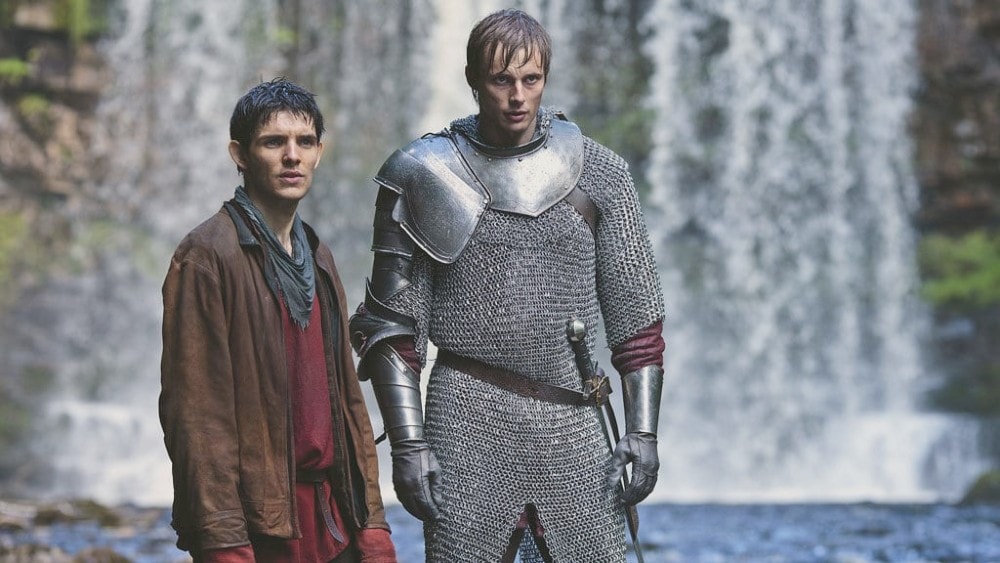 Most stories depict Merlin as a wise old wizard, right? Well, watching Merlin as a young man who, although naturally powerful already, is still honing his magical gifts and coming to terms with his destiny, is what made BBC One’s Merlin such a huge success.

Here, Merlin has arrived in Camelot to find that the use of magic has long since been outlawed in the kingdom. He soon discovers that he is destined to be Prince Arthur’s protector, for Arthur himself is destined to bring magic back and unite the kingdom.

Although the two men are initially antagonistic towards each other, they eventually come to respect each other and work together to save Albion. 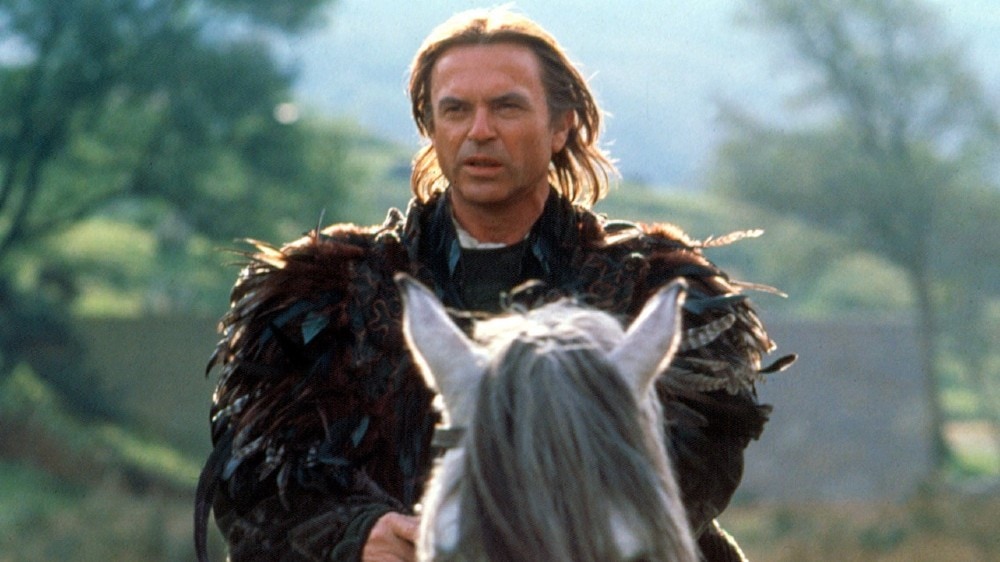 When talking about Merlin-related shows, BBC’s adaptation mentioned above really is the first one to come to mind. However, there is another that came a whole decade earlier that deserves recognition as well!

NBC’s Merlin was a three-part miniseries that begins and ends with the wizened old Merlin narrating his life story.

While there are several elements of this adaptation that stay true to the more well-known version of the legend, Merlin also introduces new aspects such as Merlin’s being an advisor to King Arthur for the entire duration of his reign.

Most notably, however, is the inclusion of a new character: Queen Mab, who serves as Merlin’s main adversary in this adaptation as she seeks to return their kingdom to the “Old Ways” – that is, the pagan way of life before Christianity took over. 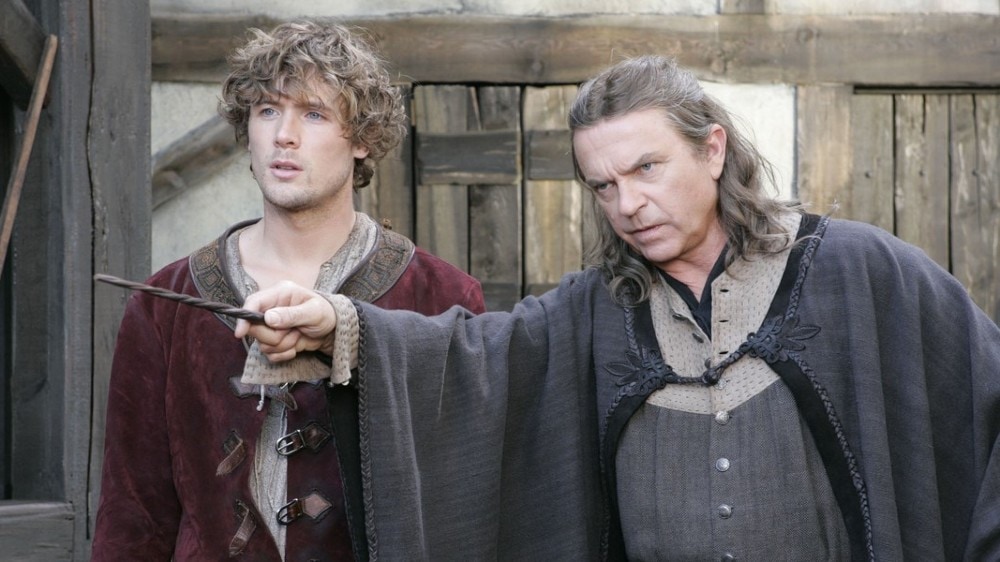 The NBC production was such a hit that it was able to inspire a sequel even eight years later!

Both Sam Neill and Miranda Richardson returned to reprise their roles as Merlin and the Lady of the Lake, respectively, albeit slightly different versions of their previous characters’ portrayals.

Merlin has just awoken from a 50-year “nap” and finds that Camelot is in disarray after the Holy Grail was taken from the King’s castle. At the behest of Lord Weston, who now runs the kingdom after King Arthur’s death, Merlin sets off to find and restore the Holy Grail so that Camelot may once again return to its glory days.

Along the way, Merlin unwittingly teams up with a hot-tempered young thief named Jack who has some untrained magical skills of his own. 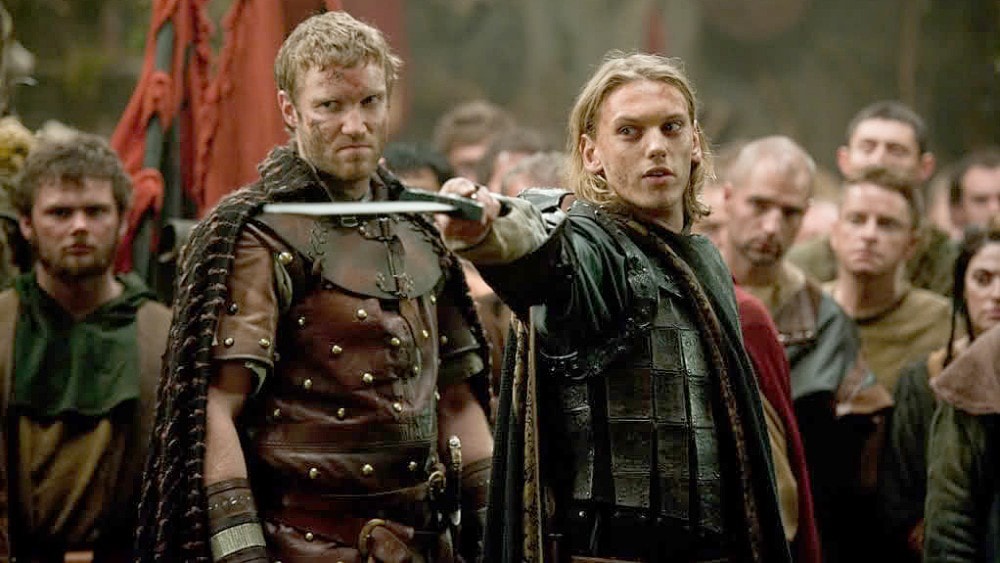 Camelot was a one-season fantasy drama from Starz that brought the beloved characters of Merlin, Arthur, and his half-sister Morgan Pendragon back to the limelight as it highlights Arthur’s ascension to the throne.

When King Uther dies, his estranged daughter Morgan is ready to take the throne. However, her plans are disrupted when it turns out King Uther had a male heir: Arthur, a young man raised as a commoner.

With his biological mother Igraine and Merlin by his side as an ally and adviser, now-King Arthur envisions a peaceful and prosperous Camelot, but Morgan uses dark forces to scheme her way into the castle.

Unfortunately, Camelot aired for just one season with ten episodes, as it was canceled due to scheduling conflicts from the majority of the main cast. 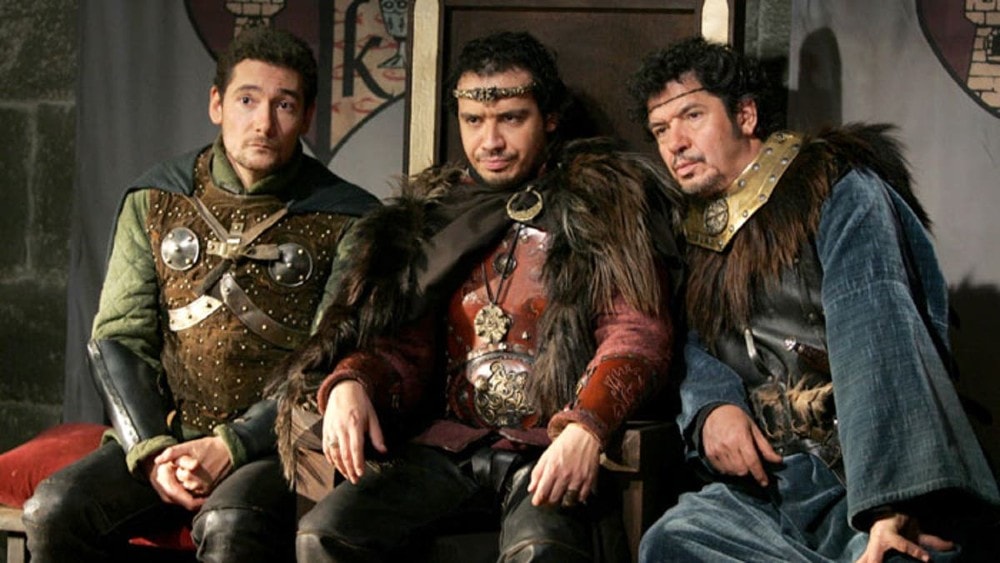 Ahh, at last, we’ve got a comedy show on the list! Kaamelott is a French-language adaptation of the Arthurian legends, once again with King Arthur at the front and center. This time, however, we get to know a little bit more about his famed Knights of the Round Table as well!

The series is set entirely within the 5th century but its comedic value comes from the mix of modern-day circumstances and language injected throughout the plotline, resulting in almost ridiculous daily situations. Despite that, Kaamelott has still been praised for staying true to the historical and mythical context of the legends.

As Kaamelott continued to garner success, the format changed slightly as later seasons introduced overarching narratives, including the subsequent downfall of Arthur’s kingdom. 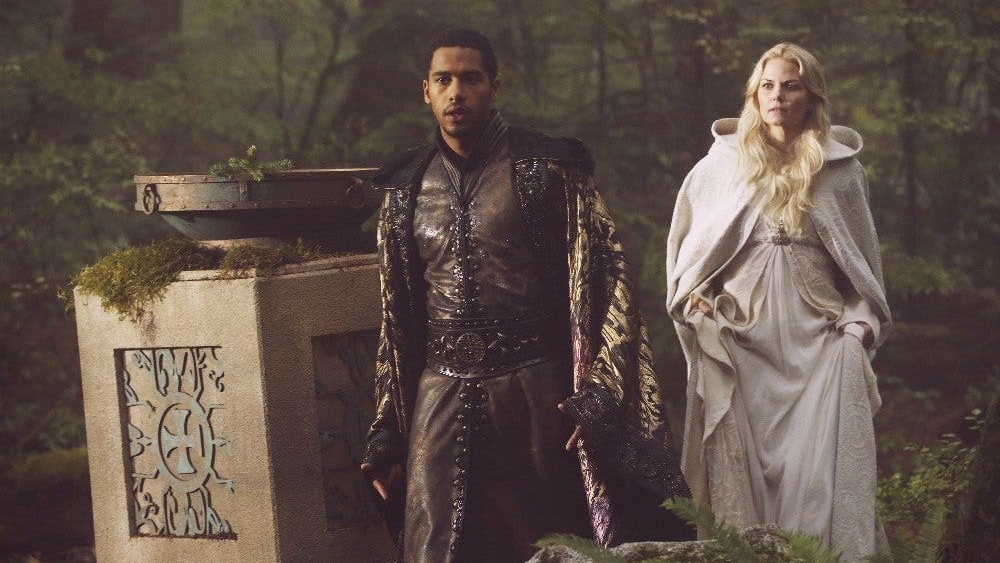 When it comes to TV shows about the mystical, the magical, the fairy tales, one show comes to mind: Once Upon a Time. Since one could argue that the Arthurian legends are every bit as mystical and magical as a fairy tale, it certainly has its place in this hit ABC series.

In the fifth season of Once Upon a Time, some of the new characters introduced included King Arthur, Nimue, Guinevere, Merlin, and even Percival – one of King Arthur’s knights!

Unlike the origin, however, King Arthur is not quite as good and pure in this reimagining as he becomes so caught up in his quest to make the broken Excalibur sword whole again. 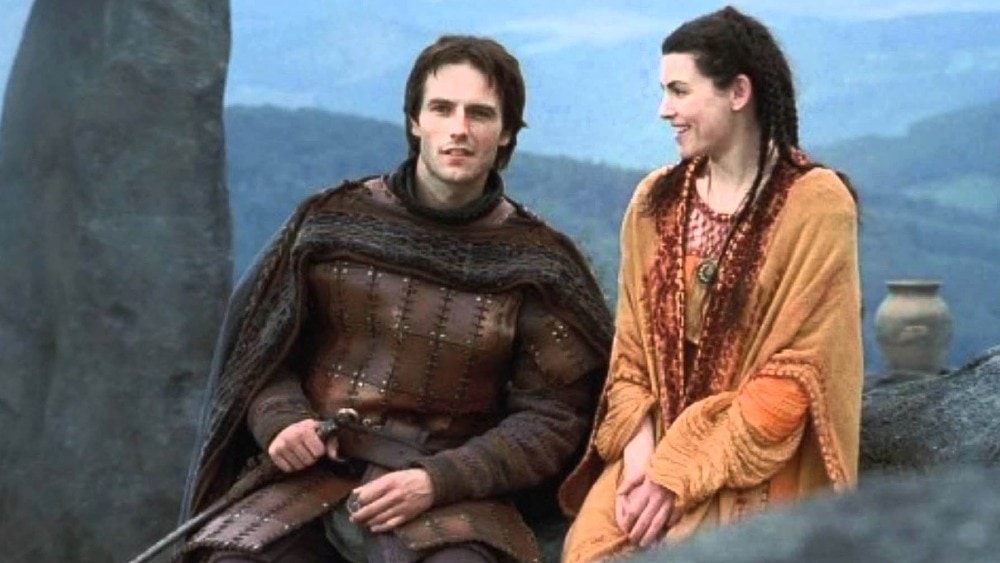 The Mists of Avalon was an eight-part television miniseries from TNT based on Marion Zimmer Bradley’s 1983 novel of the same name, which really set a high standard for reimaginings of the legends from a female perspective.

That’s right – the novel and the inspired miniseries retell the story of King Arthur from the viewpoint of the women surrounding and influencing him.

In particular, The Mists of Avalon follows Morgaine, a powerful sorceress who struggles to hold on to her pagan beliefs amidst a country with an increasing Christian influence, working hand-in-hand with the Lady of the Lake to save the entire kingdom.

In the original legends, Morgaine (or Morgan le Fay) is often portrayed as an evil, vindictive sorceress but The Mists of Avalon paints her in a new light that frankly, we’d love to see modern adaptations of, too! 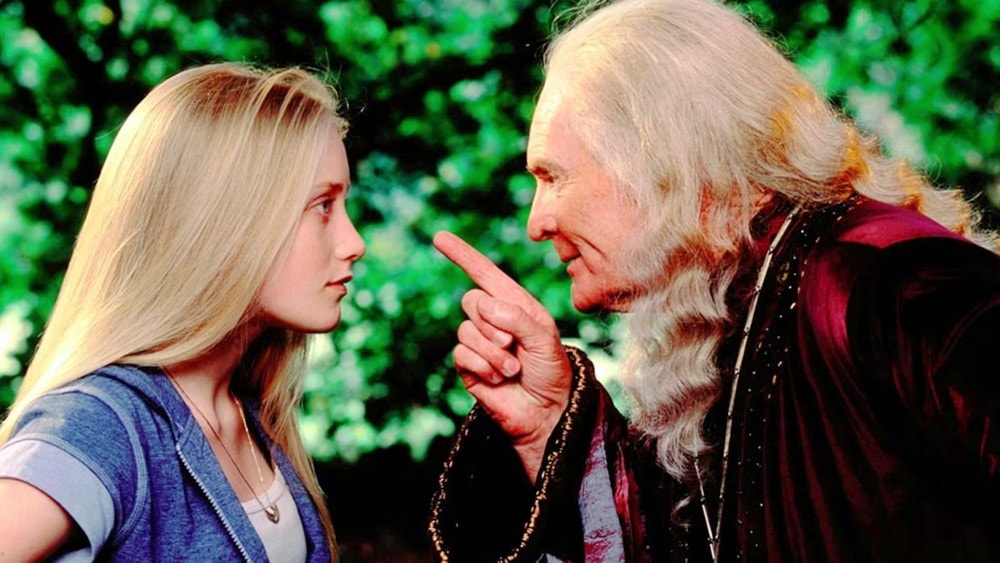 Based on a series of novels by Elizabeth Stewart, the show (which guest stars a young Chris Hemsworth as King Arthur!) follows Gwen Jones, a fourteen-year-old girl living in a magical world where she has to use magic to fight evil while also dealing with the trials and tribulations of high school.

Early in the series, Gwen learns that she’s the reincarnation of Queen Guinevere of Camelot, who brought Camelot to ruin by cheating on King Arthur with Lancelot. So now she has to contend with that faith while also being mentored by Merlin to fight dark magic and protect the innocent. 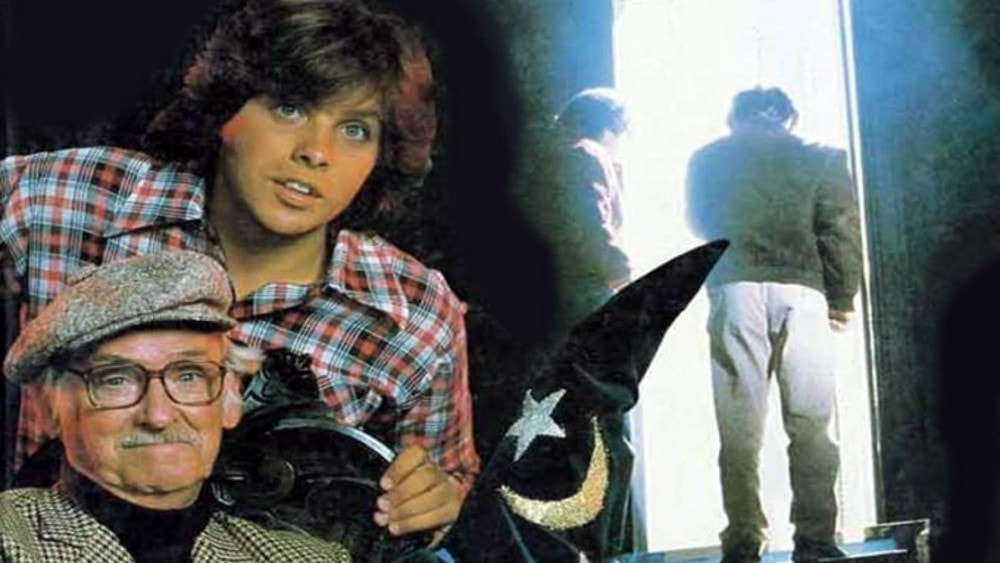 We’re taking it back four decades with the last show on our list: CBS’ Mr. Merlin – and it’s yet another sitcom!

Set in modern-day San Francisco (well, as modern-day as it was in the early 80s, anyway), the immortal wizard Merlin is just trying to live a normal life disguised as the mechanic Max Merlin. However, both his powers and his immortality are at risk from the “council” unless he finds an apprentice to mentor. Enter Zac Rogers, a young man working in Max’s garage.

When Zac accidentally pulls out a crowbar from a block of cement that turned out to be Excalibur in disguise, Max reveals his true identity and Zac becomes his “wizard in training”.

This is one show I’d also love to see rebooted for the 21st century!