If you’re among those who love a good western or are a fan of the cowboy lifestyle in general then you should definitely tune into INSP’s upcoming cowboy competition series Ultimate Cowboy Showdown. Starting Monday, October 14th you can catch twelve of America’s toughest cowboys show off their cowboy skills and compete in order to win the title of being the ultimate cowboy.

So, in honor of this first-ever competition of this kind we chatted with the show’s only two female contestants J Storme Jannise and Tara Powers about all things being a modern-day working cowboy and, of course, the Ultimate Cowboy Showdown.

J Storme is a fourth-generation cattle rancher from Hamshire Texas who’s working to rebuild her family’s operation after the devastation caused by Hurricane Harvey. While Tara’s currently putting her cowboy skills to use by working at a feed yard in the Oklahoma Panhandle and is determined to prove that women are just capable as men when it comes to all things ranching.

A big thank you goes out to both Tara and J Storme for taking the time to talk to us! Make sure to tune in to INSP on October 14 at 9ET/10PT to see the first of six episodes of the week-long event that is the Ultimate Cowboy Showdown hosted by none other than country music icon Trace Adkins. And let’s jump right into the interview!

Tvshowpilot: What inspired you to enter the Ultimate Cowboy Showdown?

J Storme Jannise: I had several people send me the Facebook post about Ultimate Cowboy Showdown, and one of my friends convinced me to enter it with her. Of course, I never in a million years thought I’d get picked, but I decided just to go ahead and give it a try. When they called me about doing it, I genuinely thought it was some kind of scam. I thought there was no chance in them actually picking me, so I did some research and realized that it was legit. In the beginning, I was extremely nervous about being on television. I felt like I was picked for a reason, and it would be good for me to step outside of my comfort zone. I also told myself that this was the perfect opportunity for me to be a good role model for other young girls out there like myself who might be interested in the cowboy way of life but may be afraid or worried about feeling like they don’t belong.

Tara Powers: My good friend, Angie, had seen the Facebook post and really pushed me to enter. I noticed that it was worded that they were looking for cowboys, so I wasn’t even sure if they were going to accept female entries. But after sending in my application information, they contacted me. The rest is history.

Tvshowpilot: You both are born and raised surrounded by cowboys and ranching. What have been the biggest challenges you have faced as women in this male-dominated industry? And did overcoming them helped you in this competition in any way, where you’re also the only two women competing?

J Storme Jannise: I grew up working cattle with a bunch of guys, and I always felt like I didn’t belong there, or that they didn’t want me there. It was never anything specific that they did; it was just in my head. I thought they wanted their ‘guy time,’ and I was messing that up, and that they were more than likely always expecting me to mess up. For years, I was so hard on myself for every little mistake I made, and I would beat myself up for days over things. However, one day I decided to change my attitude about things and about myself. I realized that everyone makes mistakes and people didn’t pay attention to my mistakes near as much as I thought they did. Once I had confidence in myself, my performance improved greatly. I was inspired to win this competition to prove to myself that I could do anything I put my head to when I believe in myself. 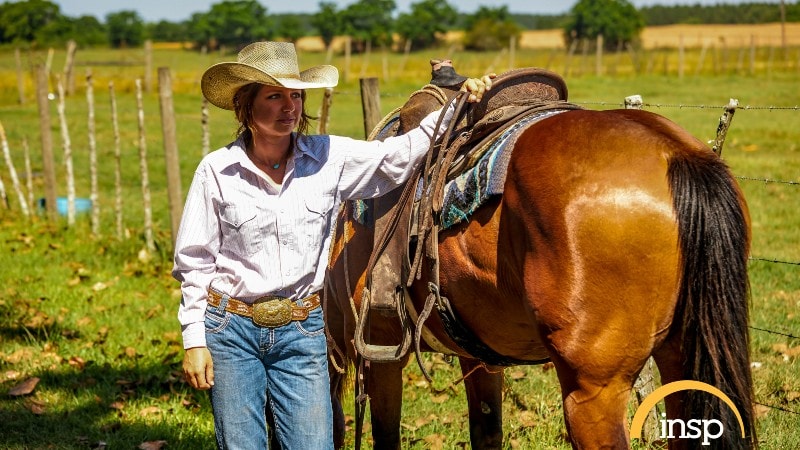 Tara Powers: Working in a male-dominated field is always challenging. However, the challenge makes it more exciting. As a woman in agriculture, you often have to work twice as hard as your male coworkers to prove that you can get the job done. For me, that is just an extra incentive to show them that I can do the same job and that in some cases I can even do it better than they can. Growing up in this environment meant that competing with the guys wasn’t any different than another day.

Tvshowpilot: J Storme, you help run your family’s ranch, while Tara, you work at a feedlot. What is the most interesting or unexpected thing people might not know about working in a ranch or a feedlot?

J Storme Jannise: I think most people probably don’t realize how unpredictable a day of work on the ranch can be. There are so many different variable factors involved in everyday operations. Even though you can go to work having a plan, it can be completely flipped upside down the moment you get there. Working on a ranch is definitely not a 9-5 job or one that is easy to plan things around. I think that’s something a lot of people don’t understand.

Tara Powers: I grew up with a cow-calf background. When I got the opportunity to work in the feed yards in Oklahoma and gain experience with that part of the industry, I jumped on it. Feed yards do some pretty cool stuff that a lot of people don’t realize. One of the most interesting parts for me is the record keeping. Every single animal gets detailed records of all care and medication. These records help us know what aliment each calf had, and more importantly when the withdrawal period of each medication is. Keeping these records helps ensure that no “hot” (animals with active medication in their systems) animals are sent to be harvested. The records are very detailed and in many cases utilize technology to keep things updated and accurate. The care the animals receive and the records we keep help us produce healthy cattle that are clear of all medication at the time of harvesting.

Tvshowpilot: If you win, which part of the prize you’re most excited about: a herd of cattle, Ultimate Cowboy Showdown belt-buckle or a lifetime of bragging rights?

J Storme Jannise: The herd of cattle is definitely the prize I’m looking most forward to. It would financially benefit me and my family’s operation.

Tara Powers: The biggest draw in for me is the cattle. I’ve been battling many financial challenges that make having my own herd difficult. Every time I take three steps forward, life throws a curveball and I am back at the start. Bringing this herd home would change my life.

Tvshowpilot: The Ultimate Cowboy Showdown is hosted by country music legend Trace Adkins. How was it working with him?

Tara Powers: Working with Trace Adkins was amazing! He is a true supporter of agriculture. It is so cool to have someone with so much influence who loves the western way of life and thinks more people should see what we do every day to produce a safe and sustainable food source. 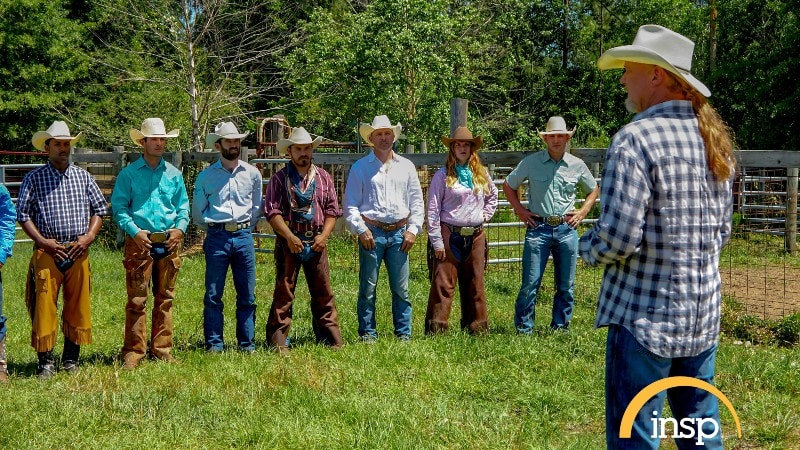 Tvshowpilot: Can you tease anything about the competition? Any interesting moments viewers should look forward to seeing during the 6-night event?

J Storme Jannise: There are lots of fun and interesting things that will happen on the show. I can’t give you many specific details. However, make sure you watch the promos and tune in to see why they had to call an ambulance one day. I’m sure the viewers will really be interested in seeing what happened then.

Tara Powers: I don’t think much before I speak, and my filter is lacking. I say some things that are sure to make you laugh until you can’t breathe. I am looking forward to watching it and hope I didn’t say or do anything on camera that is too embarrassing to live down.

Tvshowpilot: Here at tvshowpilot.com we are all about TV shows. So, what shows are you currently into and why?

J Storme Jannise: I don’t watch TV often, because I’m usually outside working or doing something around the house. However, one of my friends got me into watching Blacklist, and I like it so far. You never know exactly what’s going to happen in it, and it definitely takes lots of twists and turns, so it keeps you interested. When I’m looking to unwind and relax, I like to watch classics like Friends and That 70’s Show.

Tara Powers: I honestly don’t get much time to watch TV, but when I do, I enjoy watching classic westerns and documentaries about science and agriculture.

Tvshowpilot: Finally, why should people watch the Ultimate Cowboy Showdown on INSP?

J Storme Jannise: I think everyone should watch the Ultimate Cowboy Showdown because it’s going to be a show that the whole family can watch together. I think it will really draw viewers that to become more interested in the cowboy lifestyle.

Tara Powers: People should watch the Ultimate Cowboy Showdown because the stars of the show are some of the coolest people I have ever had the chance to meet. Individuals from all over, with a million different perspectives and ways of doing cowboy things. It’s a show that is not only going to be entertaining, while we battle for the big prize, but also informative as we share stories of our lives and tales of being a cowboy.

So there you have it, an interview with the Ultimate Cowboy Showdown’s own Tara Powers and J Storme Jannise during which we chatted about the competition and what it’s like to be a real-world cowboy.

Tara & J Storme are taking over @HomeandFamilyTV TOMORROW at 10AM ET. Check your local listings.

Watch them show off their skills on Ultimate Cowboy Showdown, Monday at 9ET/10PT. pic.twitter.com/IIRbU6U7yv

You should also check out J Storme and Tara’s Facebook and Instagram profiles to learn more about these two tough women.

And don’t forget to catch the 6-night event, which begins this Monday, October 14, to see the ladies in action and learn who has what it takes to earn the coveted Ultimate Cowboy belt buckle.