Whether we want to admit it or not, we’ve all had a grain of fascination with the British political environment. How big or small that grain is, and whether that fascination lies in the Parliament or the Royal Family, however, is where it differs.

It could be a passing interest in the socio-cultural and economic consequences of Brexit, a strong opinion on the current Duke and Duchess of Sussex’s decision to live their lives outside of the Royal Family, or even a complete obsession over the controversy surrounding the late Princess Diana’s death.

There are just so many events in British history that have the potential to hold our attention, and there’s no denying that it has been a vastly colorful history, too.

Perhaps that’s why there seems to be no shortage of material for television! We have so many British historical dramas to choose from regardless of the period its set in. 20th-century gangs? Check! History of the monarchy? Check! Beautiful costumes, detailed settings, and historically accurate dialogue? Check, check, and check!

This is why we’ve put together a list of some of the best British period dramas to watch whenever the mood hits you, divided into shows about the Royals or the regular folk in history!

Some are mini-series, due to the formatting of British television. While others span for several seasons, all of which are certifiably binge-worthy.

Shows about the Royals 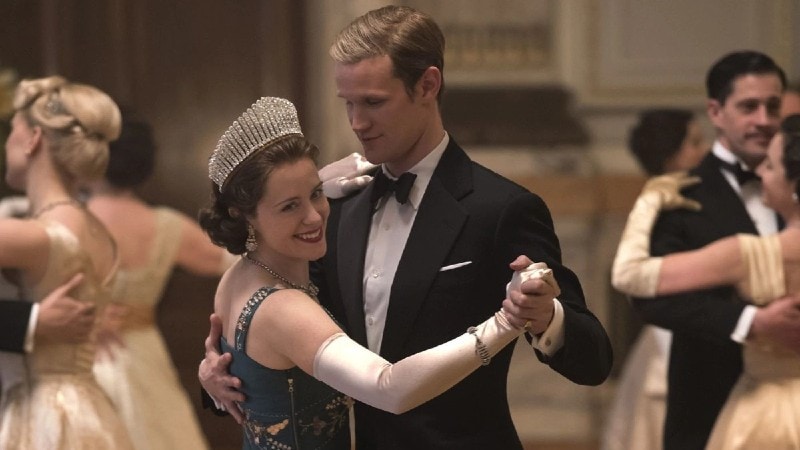 We know Queen Elizabeth as the beloved British monarch who is usually all smiles and decked out in bright, colorful outfits and every-so-stylish hats. Thanks to Netflix’s The Crown, we now also get to know more about how she came to be the longest-reigning and oldest living monarch.

It starts with Queen Elizabeth’s marriage to Prince Philip in 1947 and its latest third season, which was released on Netflix in November 2019, ended in 1977. Luckily, fans have two more upcoming seasons that will continue to narrate the Queen’s reign up until current times.

Unsurprisingly, The Crown has been widely praised and has a number of accolades to show for it, including several for Claire Foy’s portrayal of Queen Elizabeth in the first two seasons.

To keep things as accurate as possible, new actors are recast in the main roles every few seasons as the characters age through the timeline. 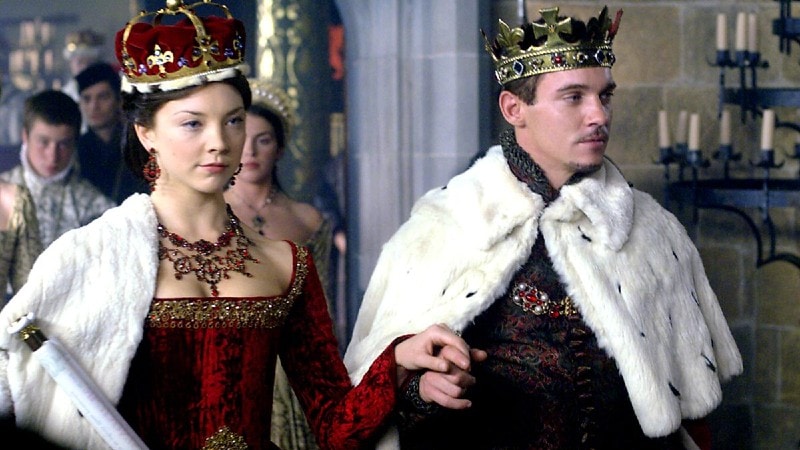 From the name itself, we continue the list with another show about the British monarchy: The Tudors. More specifically, the ups and downs during the 16th century reign of King Henry VIII from the House of Tudor.

Rife with multiple wives, affairs, religious conflict, rebellions, and its fair share of executions, King Henry VIII certainly had an eventful reign. Over its four seasons, we watch the king go through a whopping total of SIX wives in his desperate attempt to have a son to succeed him on the throne.

The Tudors uses creative liberties to depart slightly in some character names, appearance, costumes, and most significantly, the timeline of events. While it remains generally historically accurate, the show takes on a slightly sped-up calendar. Thankfully, this doesn’t create confusion and The Tudors still gained favorable reviews. 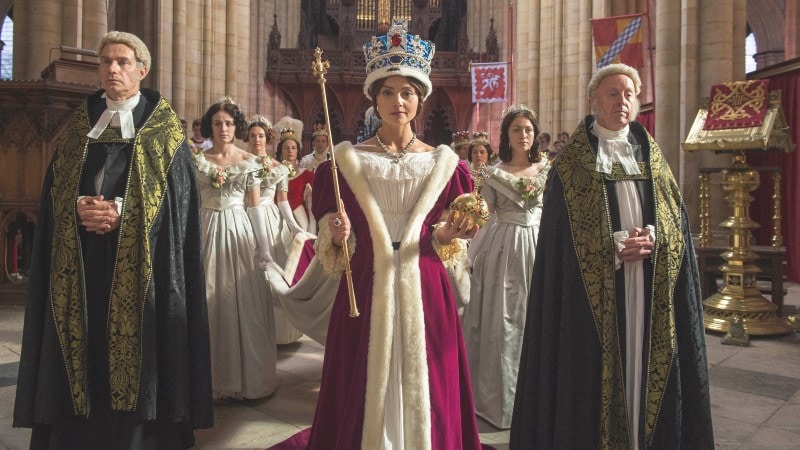 Queen Victoria was known as the grandmother of Europe during her long reign of 63 years, and this is her story.

Beginning at the start of her reign at just 18 years old, the first season of Victoria depicts her pursuits of the heart. Namely, her infatuation with her advisor and eventual marriage to Prince Albert of Germany.

Season two continues her journey showing her juggling her duties as the youngest monarch, a wife, and a mother.

By the time the third (and latest) season comes, they’re on their sixth child. Her nickname as the grandmother didn’t come from nowhere – in history, her children were all married to upper Royals across the entire continent, after all.

Victoria has historically accurate building blocks as its storyline but, just like any other good TV shows, the ITV series uses liberties in straying away slightly for the sake of drama. 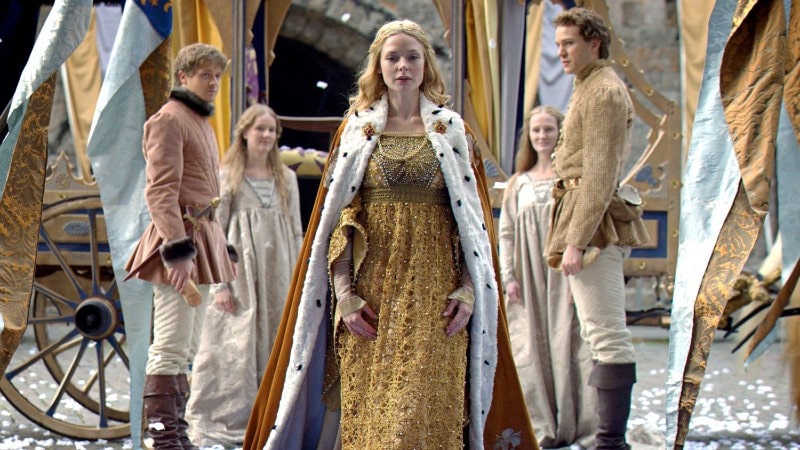 BBC One’s The White Queen is another show based on a series of novels, this time by historical novelist, Philippa Gregory.

If you’re a fan of Game of Thrones, the narrative of this series may seem familiar as it depicts the history of the Wars of the Roses, several civil wars between two branches of a royal house that were fighting for control of the throne: the House of Lancaster and the House of York.

In history, this war is fought primarily between men – as everything in the 15th century was. In The White Queen, however, the story is told from the perspective of three women from different sides of the war as they manipulate events to gain power.

Due to the limitations of fitting roughly thirty years into 10 episodes in this miniseries, there are some inaccuracies in timeline and character depiction. But nothing too extreme that takes away from the essence of the narrative.

Pillars of the Earth 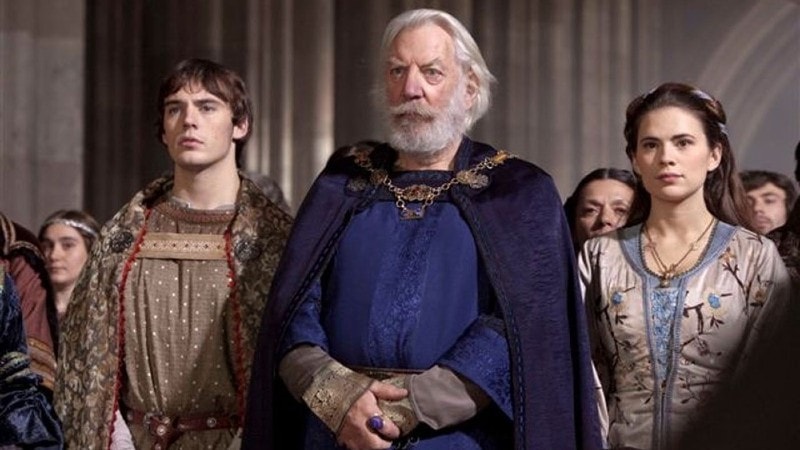 This eight-part miniseries takes place way back in the 12th century, during a period in British history called The Anarchy.

During this time in real history, another civil war was ongoing to due varying claims of succession to the throne after the accidental drowning of William Adelin, the only legitimate son and heir of the former King Henry I.

However, the plot of Pillars of the Earth brings to the limelight the religious consequences of such a war.

In particular, the building of a cathedral that later proves central to the story. Perhaps, in an allusion to the event the miniseries is based on, it is meant to become a symbol of Winchester Cathedral, where the peace treaty was sealed that officially brought an end to the civil war. 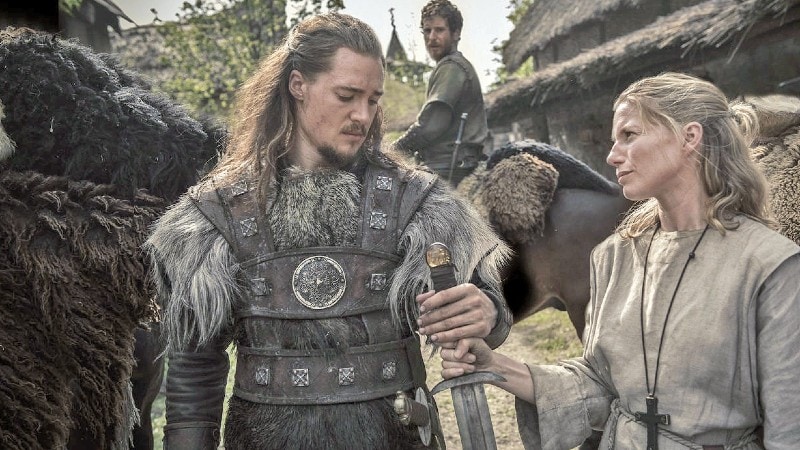 Going even further back, The Last Kingdom takes place in the 9th century.

Since the country then was a heptarchy better known as the seven kingdoms of Anglo-Saxon England, there was a lot of mixed cultures looking to rule the lands in those times.  In The Last Kingdom in particular, the Viking Danes were the ruling group and the Kingdom of Wessex is the strongest of the kingdoms remaining.

Based on The Saxon Stories novels by Bernard Cornwell, the series has since released three seasons covering the first six novels within the book series.

Uhtred, the main character, is a Saxon-born raised by Danes, so his loyalty is constantly tested throughout the series. After the death of his adoptive father by fellow Danes, he sets out to seek revenge and hopefully reclaim the Saxon throne that was taken by his uncle.

Shows outside of the Royals 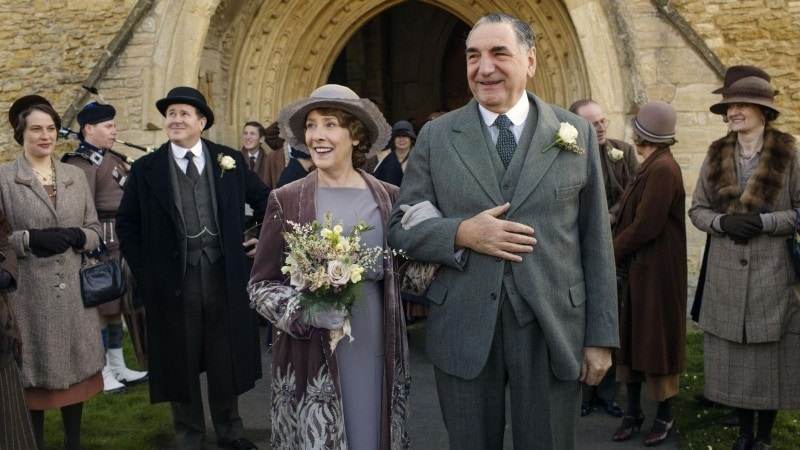 Downton Abbey is the name of a fictional estate in Yorkshire. And the ITV drama series centers on the equally fictional aristocratic Crawley family. It progresses from roughly 1912 to 1926 and covers very real historical events.

Throughout the six seasons, we see how events such as the sinking of the Titanic, World War I, and Spanish influenza, and eventually, the rise of the middle class and subsequent fall of the British aristocracy affected the lives of the wealthy Crawleys.

After the series ended in 2015, production on a film picked up in 2018, loosely based on an actual trip of King George V and Queen Mary to the Wentworth Woodhouse as a show of the importance of the monarchy.

Downton Abbey has had such a significant impact on pop culture that there are several references to it in other shows like NCIS, Family Guy, and even the movie Iron Man 3. 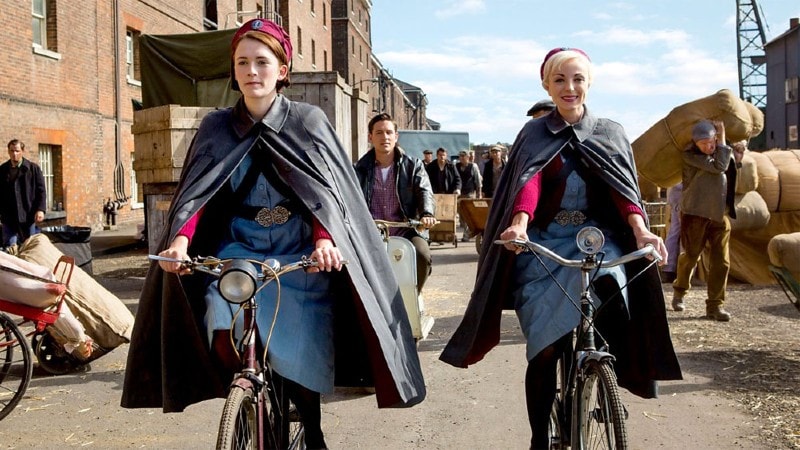 In Call the Midwife, we’re viewing history through the lens of female professionals in the medical field. It’s based on the memoirs of the late Jennifer Worth, a British nurse, and midwife working at a nursing convent in the East End of London in the 1950s.

Set in the same place and timeline, Call the Midwife tells the stories of the midwives and nuns of the Nonnatus House that, like Worth’s convent, is part of the Anglican religious order. Their work is focused on providing the best natal care to the poverty-stricken women in the Poplar district of the East End.

Currently on its 9th season, this British historical TV series has so far covered real events in history like the “Baby Boom” and post-war immigration in the late 50s, the onset of the Civil Defence Corps and nuclear warfare, and the introduction of contraceptive pills.

The show has received praise for touching upon more sensitive topics in the era as well, like interracial marriages, mental illnesses, prostitution, abortion, and homosexuality. 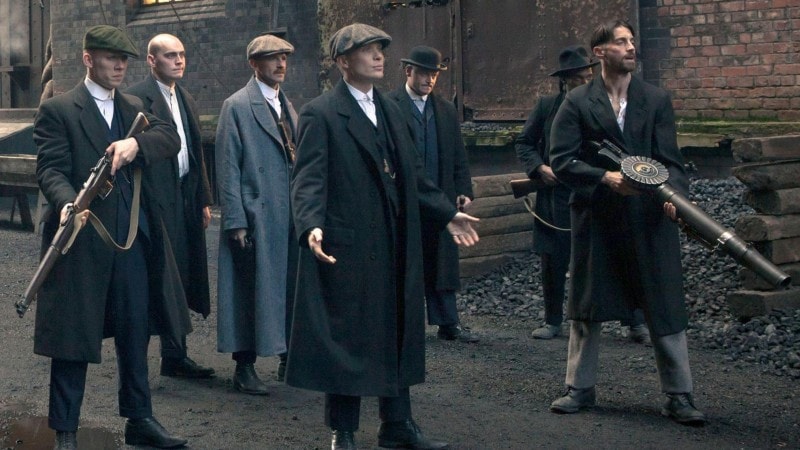 The roaring 20s may have seen a boom in economic prosperity in London, but the scene in Birmingham was a whole other story. On the contrary, it was from the city’s economic deprivation that the Peaky Blinders, a real-life youth gang, flourished.

In BBC’s fictional adaptation of the Peaky Blinders, the Shelby crime family takes center stage as the group loosely based on the original gang of the same name. As the series progresses, we see the family’s operations and influence continue to grow. First regionally and then finally, in the third season, internationally as well.

Having a slew of awards to its name and a recently concluded 5th season, creator Steven Knight confirmed that the story would officially wrap up with the 7th season. In the meantime, you can stream all five seasons on Netflix! 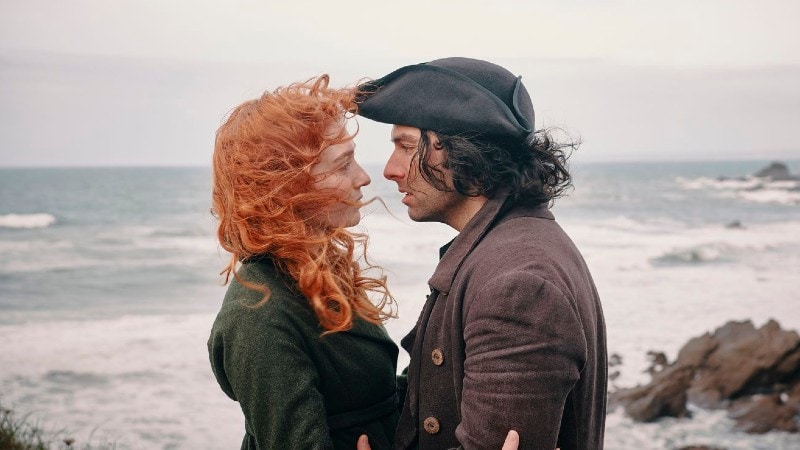 In the aftermath of the American Revolutionary War in 1783, Poldark narrates the story of the titular character’s return to his hometown of Cornwall. Based on a series of twelve novels by Winston Graham, the show concluded after five seasons in 2019.

Ross Poldark served as an officer in the British army for three years. When he returns home, he finds that his father died six months prior, his inheritance is in ruins, and his childhood sweetheart has been betrothed to someone else – his cousin, no less!

But amid the chaos to get his estate back in order, Poldark finds love and family in an unexpected encounter with a scullery maid named Demelza. 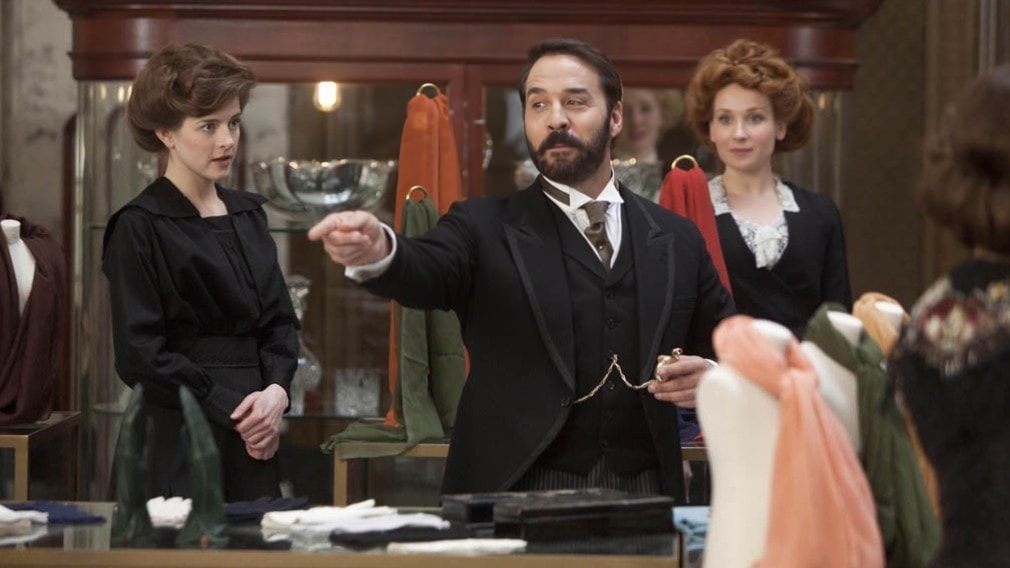 For a bit of a lighter mood, Mr. Selfridge is a great series to binge.

It tells the story of Harry Gordon Selfridge and how he founded and established Selfridges, a chain of high-end department stores still operating in the UK.

Starting with the establishment of the flagship Selfridges store on Oxford Street, the four seasons expand to cover the trials and tribulations of building a retail brand to compete with Harrods.

We also get a glimpse of what his personal life was like – as a married man and subsequently a widower, and as a member of the wealthy socialites of the country.

Mr. Selfridge wrapped up after four seasons, right before his wealth eventually depleted during the Great Depression of the 1930s. 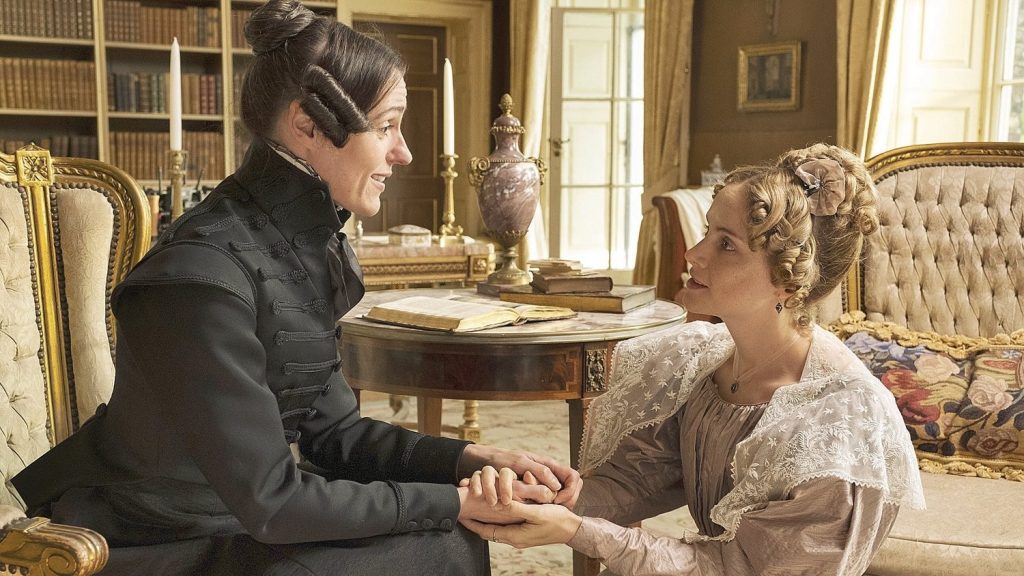 Gentleman Jack is based on the real-life story of Anne Lister and a collection of her coded diaries.

Anne Lister was a well-known landowner and industrialist who lived an openly lesbian lifestyle. Something vastly unheard of during the early 19th century. She’s been called the first modern lesbian and was revealed to be called “Fred” by her female lovers and “Gentleman Jack” by the residents of Halifax, West Yorkshire, where she resided. Thus the title of this show.

Her journals chronicled various aspects of her daily life, including her finances (of which she had plenty) and her romantic and sexual relations. Perhaps because open homosexuality was not as accepted as it is today, many of these diary entries were coded.

In 1930, almost a whole century after her death, it was finally decoded. And these entries served as the basis for HBO and BBC One’s Gentleman Jack.

So, which one of these fascinating British historical dramas are you ready to binge-watch first? Maybe go chronologically, or watch a few of them at the same time!