Killing Eve is the thriller series we have been waiting for for years. A female murderer on the loose with a female investigator on the case, with all the gay sexual undertones we’ve always needed. Too often these types of high impact thriller stories are all centered on men, and therefore the story can quickly get boring and repetitive. Thankfully, Killing Eve takes off on its own spectacular journey, and we are finally seeing women where they belong: in the action.

This series so far has managed to follow a common serial killer trope: unhealthy relationships. Season one ended with Eve driving a knife into the gut of Villanelle even as she professed that she was constantly thinking of her in a romantic way. We thought she was leaning in for a kiss, and then BAM: a knife to the gut. But then the saccharine moment turned sour and the scene cut to black. We could only hope for the same jarring types of scenes that elicit such strong emotions in season two. And boy did they deliver! So here are some of the best scenes and moments of Killing Eve season 2.

Right out the bat Villanelle was back to her confusing slayer ways in the second season of Killing Eve. Why does she snap the neck of poor little Gabriel at the end of the season 2 premiere episode? Is it because she can’t control herself? Or is it an act of mercy because she wouldn’t want to live that way?

This is just another example of how little we understand Villanelle’s motives, as they always seem to jump back and forth between what benefits her and what she feels others need. To Villanelle there is no right or wrong, there’s just a decision in the moment, and no room for regrets later on.

Still, most viewers did not expect her to kill a child in the middle of an embrace. Which is why there was something entirely unexpected about the scene, even though there shouldn’t have been. Killing is what Villanelle does best.

Konstantin’s imminent return was definitely the most exciting moment of season 2. What is it with Killing Eve and their tendency to drop major bombs at the end of every episode? It’s a frustrating tactic that however works and keeps us salivating for the next episode.

Last we saw of Konstantin he was suffering from a gunshot wound inflicted by the ever flippant Villanelle. Such a complex and interesting character needed to remain alive, even if just for the sake of being the only person capable of manipulating Villanelle in a positive way. Come one, we all want to see where he goes from here and what new betrayals he will get up to next.

Eve’s husband, Niko, finally got a clue about the real nature of his wife’s relationship with the dangerous serial killer. To be fair, he wasn’t too happy about it. But he did this weird sudden turn around where he basically channeled his inner darkness and violence, the violence he is often so reluctant to even hear about. 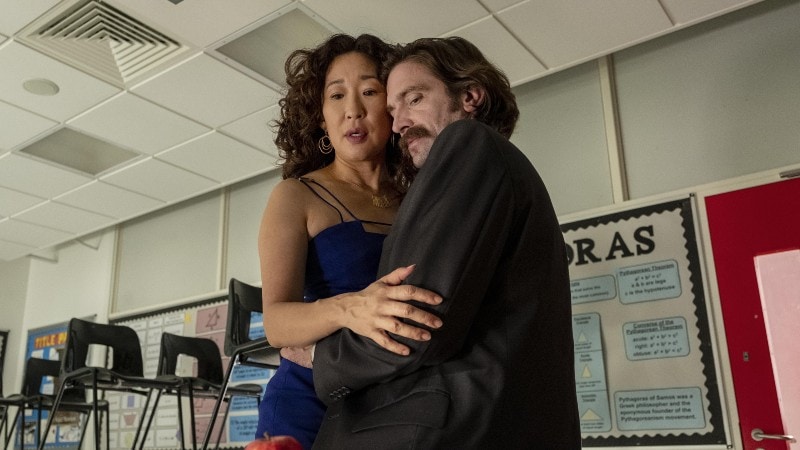 Yes, Niko has a dark side it seems, and to Eve’s delight he played it out beautifully one angry night, resulting in kinky sex that left Eve elated and Niko, well, he left. Yup, that’s right, after a night that maybe should have brought them closer together, Niko instead left his wife.

He was trying to follow the advice of a serial killer enamored with his wife. And when it worked, he realized maybe this wasn’t the healthiest of marriages. His departure was swift and confusing because we don’t really understand why the darkness repels him so much, especially when it led to such good sex.

Above all else, Villanelle was supposed to keep her killer instincts to herself. Carolyn had in fact instructed, “I hate to be strict, but she [Villanelle] really mustn’t kill anyone.” This turned on its head when Aaron instructed Villanelle to kill Eve, and instead, she slit his throat, allowing him to witness his own gurgling death in the mirror.

This was definitely twisted because he smirked even as he bled out because watching was what he did best, even when it came to his own death. Everything about that scene felt abnormal, from one serial killer to another.

Everything that has happened on the show was leading up to the very real manipulation of poor Eve Polastri. Villanelle convinced Eve to kill her not-so-kind handler with an ax, a very physical and personal way to kill someone, as opposed to a gun. We’ve been waiting for Eve to finish her full descent to the dark side and do what she has to for Villanelle, but this scene was so intense.

Eve was left reeling from the experience when she realized Villanelle had a gun all along and didn’t need Eve to protect her. She instead had tricked Eve into killing Raymond, and that’s when we saw how truly twisted their bond is. Yeah, we expected it, but man was Villanelle cold even as she professed her love.

Finally coming full circle, Villanelle shot Eve the moment she got what she wanted and didn’t like what it turned into. She wanted Eve to kill for her, and maybe even enjoy it, but didn’t like it when Eve took a step back to consider the whole picture.

Twice this season Villanelle refused to betray Eve. But when it came down to it she so easily just shot the woman she claimed to love in the stomach, a very painful way to go. This was not entirely unexpected, but the moment was definitely memorable as it left us wondering what’s in store for us in season three.

The show is called Killing Eve, so Eve probably won’t die because she is the titular character. But who knows where they will go from there? However, one thing’s for sure: it’ll be killer!