Northern Ireland is an absolutely beautiful country. As a constituent of the United Kingdom, it’s been referred to as a territory or province of the region as well but regardless of the discourse over nomenclature, this is one fact you can’t dispute: it will take your breath away.

Northern Ireland shares a land border with the Republic of Ireland on one side while on the other side is a long coastline, where all you’ll see for miles is the open seas.

Nature and history lovers will love it here, where many tourist attractions center on seaside and park attractions, as well as ancient castles.

It should come as no surprise then that many TV shows that require vast expanses of green land, cliffs by the sea, and castles are filmed in Northern Ireland – Game of Thrones’ Winterfell being just one example!

In this list, we’re checking out the best TV shows about Northern Ireland (and some, of course, filmed there too!), so we can see not just the places but the people as well. 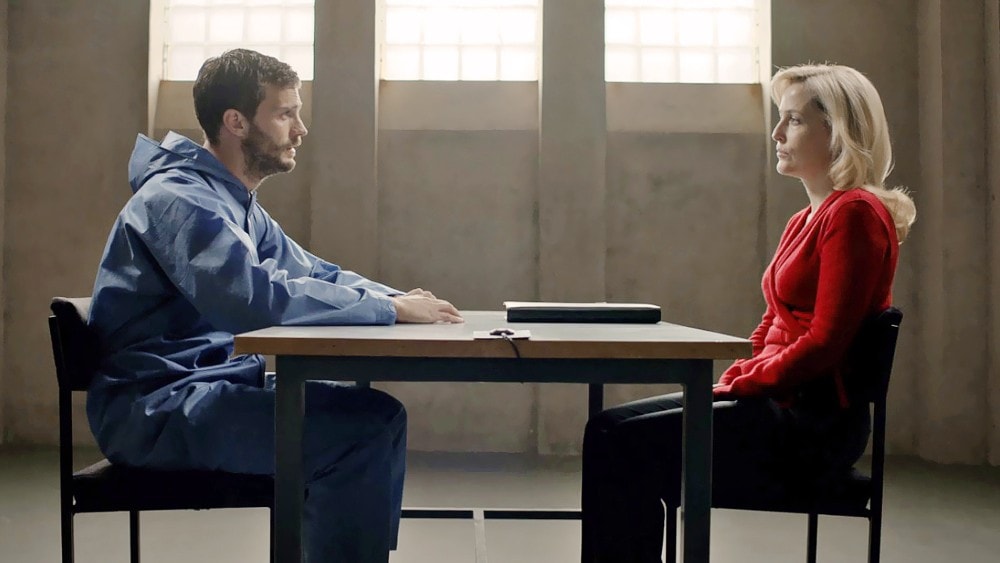 Both filmed and set in Northern Ireland, The Fall is a take on the idea of “the hunter becoming the hunted” as it revolves around two central characters: Metropolitan Police Superintendent Stella Gibson, and serial killer Paul Spector.

We first meet Gibson as she’s been tasked to check in with the Police Service of Northern Ireland (PSNI) on an ongoing investigation that had already been open for close to a month.

While there, they discover that the perpetrator is a serial killer who targets young, female professionals in Belfast.

Gibson works with the local law enforcement to catch him but both internal and external complications delay the investigation, even as Spector hides in plain sight. 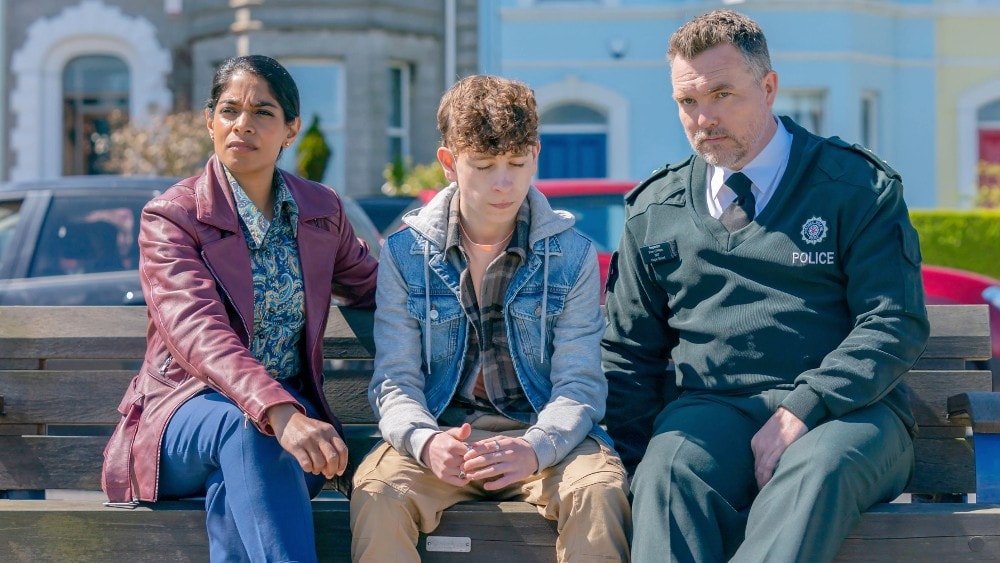 Hope Street is a crime drama that premiered on BBC One Northern Ireland in 2021 and since has earned a second season renewal.

At the center of the series is Detective Constable Leila Hussain who recently transferred to Port Devine for reasons only Inspector Finn O’Hare knows. Which left the town’s local residents pondering the reason why Leila chose to move to the small Northern Irish town. 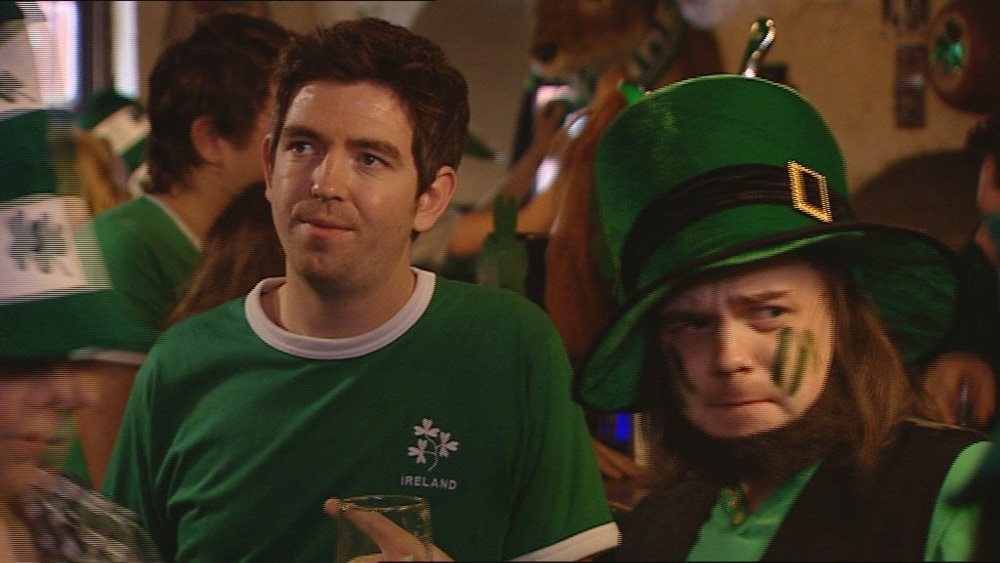 Seacht was a drama series that ran for four seasons on the Irish language network TG4; the show was also shot on location at The Queen’s University of Belfast, particularly within the school’s Arts Department.

Its original Irish title, Seacht, is translated as ‘seven’ in English, and is a reference to the seven main characters in the series: Brian, Caroline, Pete, Joanne, Eithne, Linda, and Decko (and recurring characters Marcus and Paddy).

As such, the storyline revolved around each of these art students’ messy lives – how they dealt with the pressures of college and schoolwork, their interactions with each other, and of course, love. 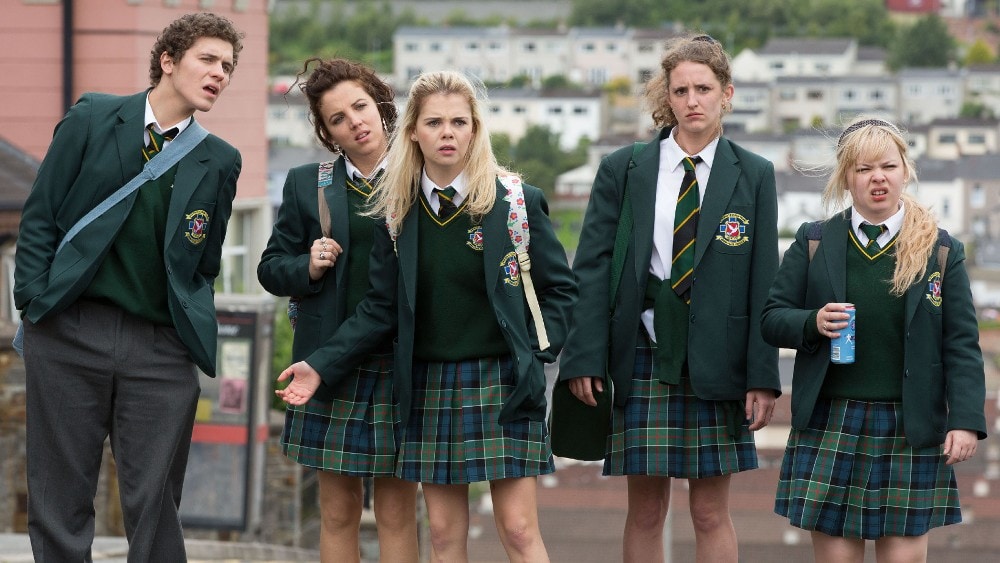 Derry Girls may be a British sitcom, but it’s set in a very significant historical period for Northern Ireland: the Troubles, a period of almost 40 years between the 1960s and 1998 that saw the country divided on issues of religion and nationalism.

It was a turbulent time in the country’s history, but life had to continue for many of its civilians.

Derry Girls tells one such story of 16-year-old Erin Quinn and her cousin Orla who, along with their friends, are trying to get through their teenage years in the 1990s as normally as they can amidst the national conflict surrounding them.

Derry Girls shows how the youth of that era navigated their difficult teenage years with laughter and friendship. 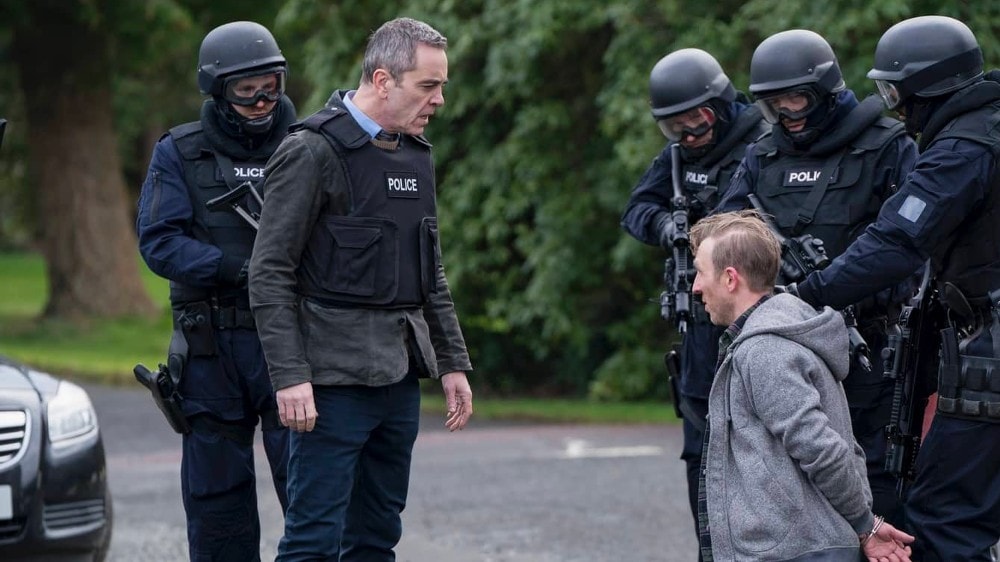 The first season of Bloodlands that premiered in early 2021 was only 4 episodes long, but it packed such a punch that the series was almost immediately renewed again for a second season (though there’s no news yet of a premiere date).

In these first 4 episodes, we follow James Nesbitt as Detective Chief Inspector Tom Brannick as he embarks on a kidnapping and possible murder investigation.

The case stirs up connections to a cold case from two decades ago, and Brannick is forced to confront a shadow from the past: a mysterious killer named Goliath.

Thus begins Brannick’s spiral into casting a light into both his own history – and the country’s.

Like Bloodlands, BBC2’s Eureka Street is a 4-episode miniseries set in Belfast, Northern Ireland, though the latter has its origins in Robert McLiam Wilson’s 1996 novel of the same name.

Similarly as well to Derry Girls, the series is set during the Troubles and centers on the lives of those who are trying to keep their lives and relationships going through the turmoil.

In particular, we follow Jake Jackson, a Catholic repossession agent whose life is changed when he meets a woman from the other side of the “war”; and Protestant Chuckie Lurgan, whose struggle with finding his purpose in life ends when a business idea takes off.

My Mother and Other Strangers, BBC Northern Ireland (2017) 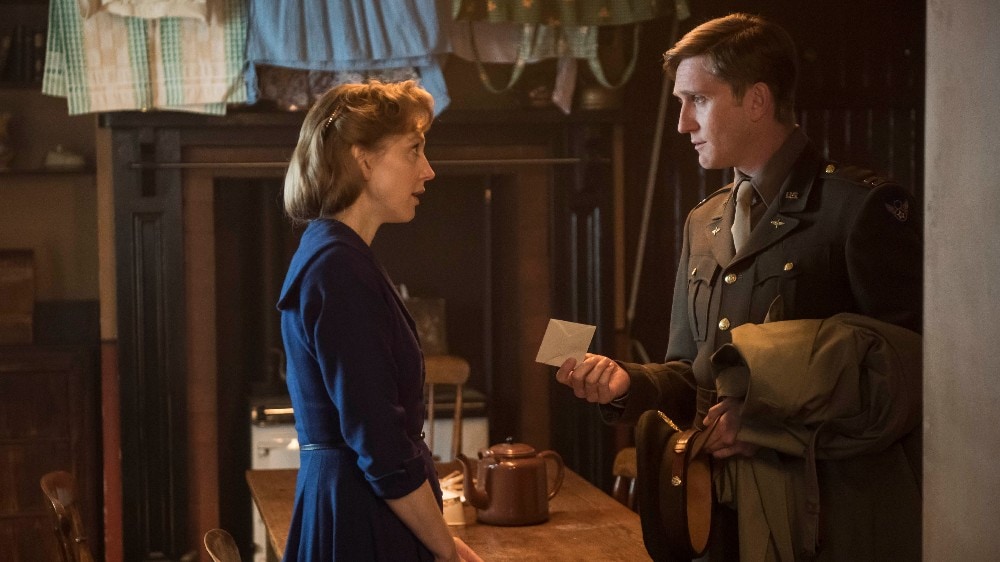 A few decades before the Troubles, Northern Ireland also had to experience the hardships of World War II.

My Mother and Other Strangers gives its viewers an insight into the lives of those living in the small (albeit fictional) town of Moybeg, on the shores of Lough Neagh.

In particular, the show centers on the Coyne family – Rose and Michael, and their three children Emma, Francis, and Kate.

The Coynes’ everyday lives, as well as those of their neighbors, were changed when an influx of over 4000 servicemen and women from the USAAF set up base in their parish.

This becomes even more disrupted when Rose gets caught in a love triangle between her husband and a USAAF liaison officer. 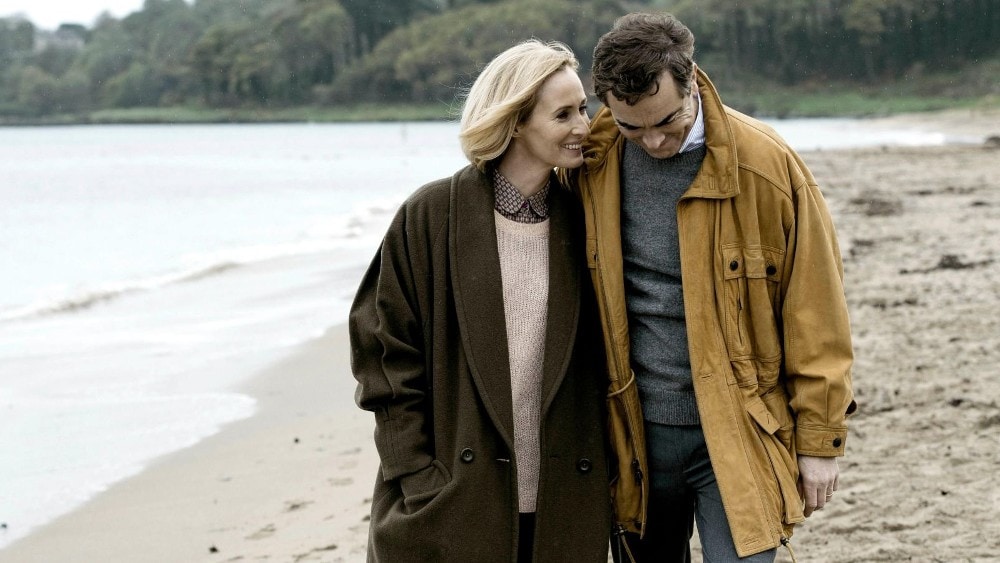 James Nesbitt makes a second appearance on our list in yet another Northern Ireland miniseries, again with just 4 episodes.

The Secret is based on the true-crime novel by journalist Deric Henderson and as such, is based on an actual case in real life.

The series follows Colin Howell (played by Nesbitt), a dentist, who meets and falls in love with Sunday school teacher Hazel Buchanan. However, both are married and as members of the Baptist community, can’t simply divorce their spouses to be together.

These circumstances set them on a dangerous path of scheming and murder – a secret that (in real life), they bury for almost two decades. 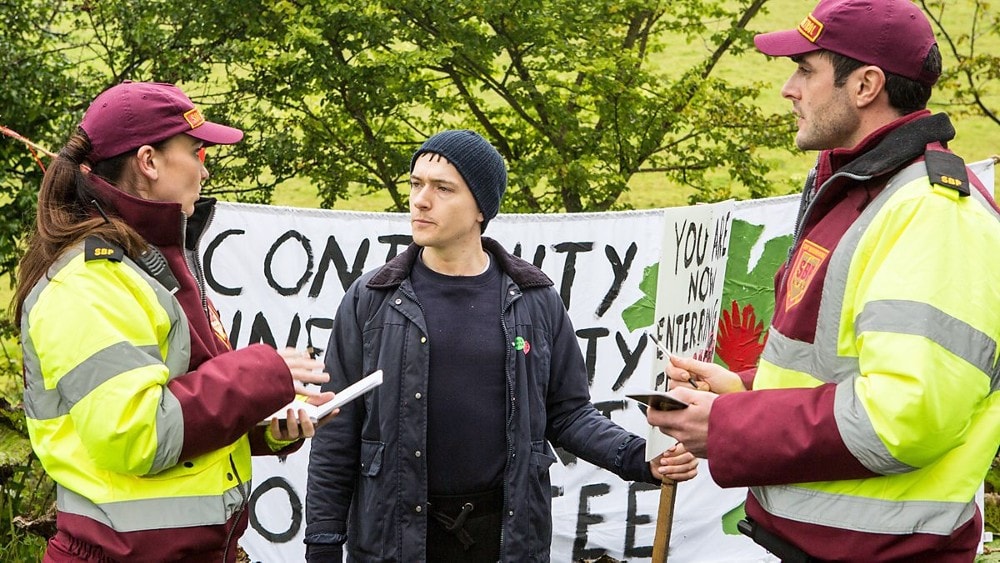 On the stage of international politics, Brexit was a recent event that shook the European Union – and the world.

Thankfully, Soft Border Patrol serves a bit of a comic relief born from the real-life clamor for a “soft border” between Northern Ireland and the Republic of Ireland.

The series is formatted into a comedy mockumentary, similar to any reality TV show that follows the employees and day-to-day of any official law enforcement organization.

This time, the focus is on the titular Soft Border Patrol, which monitors those who cross the border between the UK and the EU “be they human, animal or fish”. 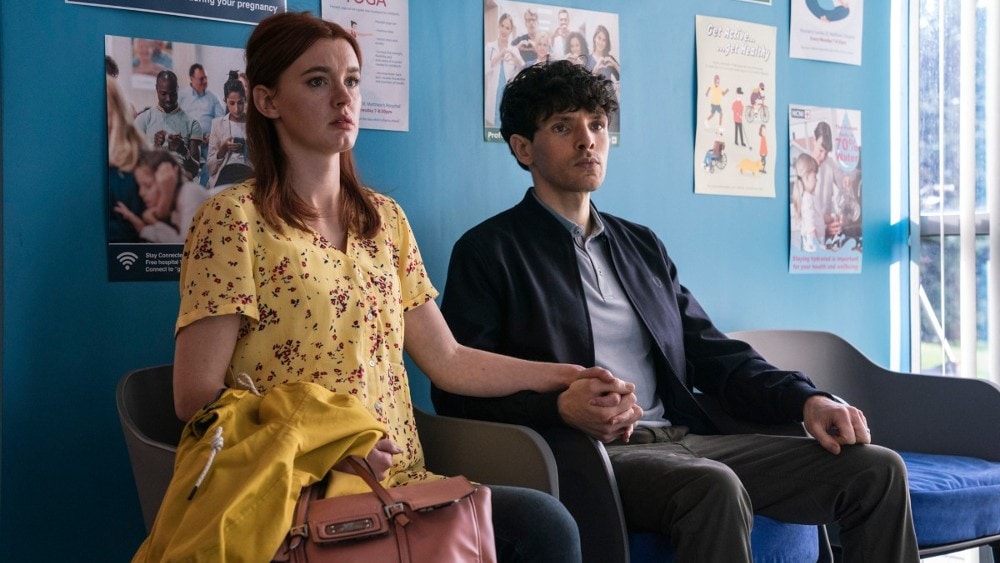 Last but not least, this two-part miniseries tackles one of the most controversial laws in Northern Ireland and the process of its decriminalization: the abortion law.

Three Families takes place between 2013 and 2019, as the restrictive law was being lifted across the country.

Throughout its two episodes, Three Families tells the stories of the families affected by the law and behind its campaign to end.

Naturally, it goes deep into the plight of women and couples who seek abortion as an option – whether for financial or health reasons – but are met with the unrelenting wall that the law had in place.