Not to freak anyone out, but a lot of events in recent times almost make it seem like the end of times are being ushered in.

The 9/11 attack, frequent terrorist bombings, and heartbreaking increase in school shootings feel like the end of the world will be triggered by some sort of world war. On the other hand, worldwide epidemics like SARS, MERS, and the more recent COVID-19 reflect a viral apocalypse.

Many movies and shows paint a clear picture of how the world would deal with an apocalyptic event and its consequences. You know, scarcity of resources and zombies – the usual. And while watching movies and TV shows like this can be kind of frightening, there’s a pretty huge fascination with the genre as well.

Even video games have been hopping on the trend! Perhaps fans are trying to put together a personal survival guide full of tips and tricks to stay afloat throughout the Armageddon. Or, maybe that’s just me.

Either way, post-apocalyptic shows have a gripping quality to them that draw viewers in and keep them. So, we’ve put together a list of the best post-apocalyptic TV shows out there for you to binge-watch, just in case the doomsday prepper in you wants to get started on that survival guide! 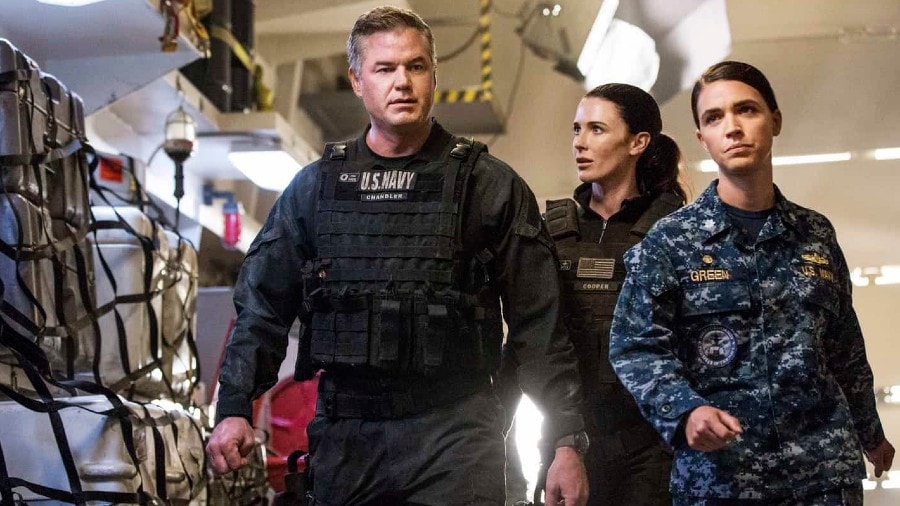 Now we’re jumping all the way up to losing 80%of all people. It’s unclear what year TNT’s The Last Ship is set in exactly, but we do know that it’s quite loosely based on the 1988 novel of the same name by William Brinkley.

In The Last Ship, a viral pandemic swept across the globe and as previously mentioned, wiped out about 80% of the population.

Strangely enough, there was one U.S. Navy ship (an Arleigh Burke-class guided-missile destroyer with a fictional name of USS Nathan James) that remained completely unaffected.

The crew, composed of 218 people, is now responsible for finding a cure and saving the remaining people in the world.

Where to watch The Last Ship: 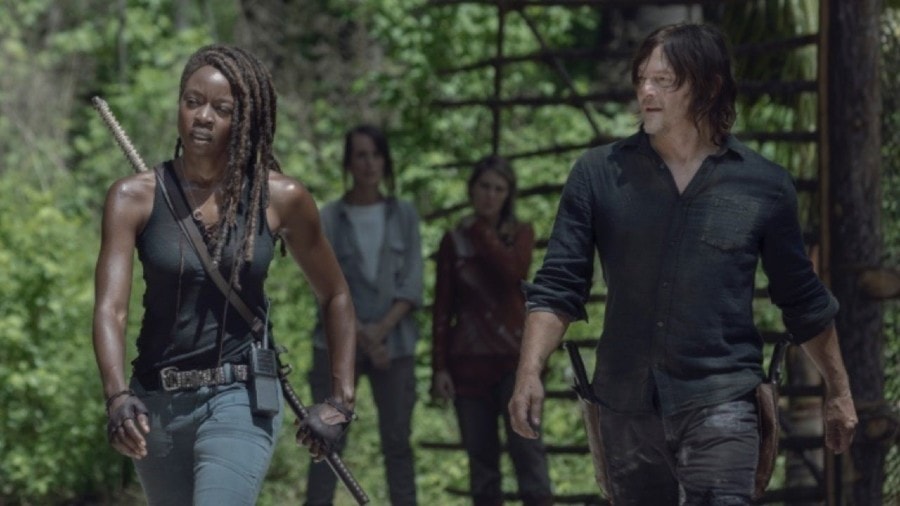 AMC’s The Walking Dead is undoubtedly one of the most successful post-apocalyptic TV shows, spawning two spinoffs and even in talks for films.

Based on the Image comics of the same name, The Walking Dead begins after a zombie apocalypse, where we soon discover that all humans are susceptible to the zombie pathogen through death, and not just getting bitten.

The series is primarily focused on Rick Grimes, a sheriff’s deputy who eventually becomes the leader of a group out of Atlanta, Georgia.

Each season is a heart-pumping narration of how they fight for survival against both the walkers and humans alike.

Where to watch The Walking Dead: 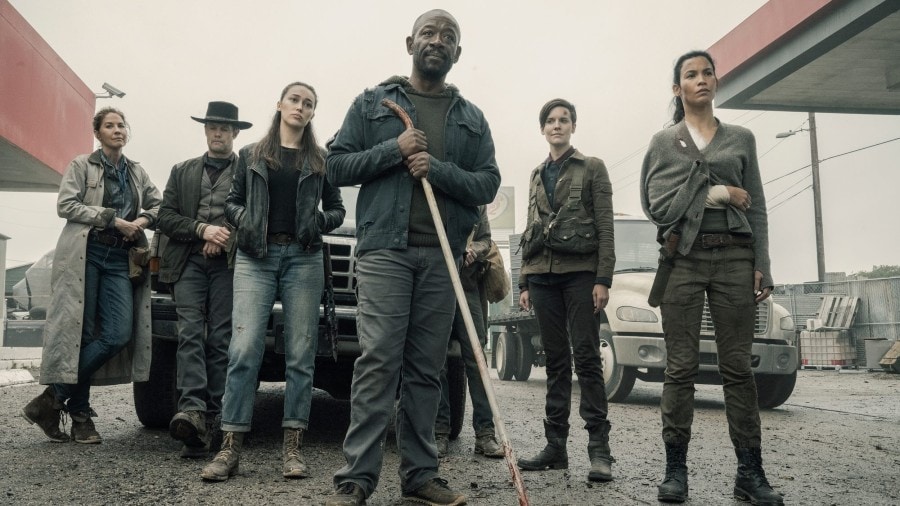 Fear the Walking Dead is the first spinoff of the previously mentioned The Walking Dead series. It’s intended as a prequel to explain how the zombie apocalypse started in the first place, and how the world devolved into the desolate state that Rick Grimes woke up to in the pilot of The Walking Dead.

Originally set in Los Angeles, it mainly follows a family composed of high school guidance counselor Madison Clark, her teenage son and daughter, her fiancé, and his son from a previous marriage.

Through its seasons, their family evolves to deal with the ongoing collapse of society as their survival group only continues to grow.

For those wondering how Fear the Walking Dead will tie into the parent series, a familiar character was already introduced back in season four!

Where to watch Fear the Walking Dead: 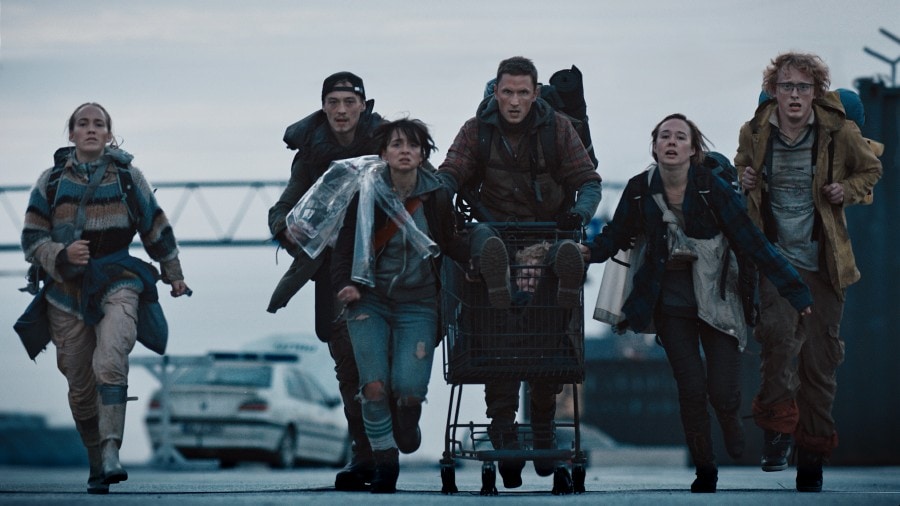 The Rain is a Danish Netflix original currently waiting for the release of its third and final season.

In the show, almost all citizens of the Scandinavian region were wiped out by a virus carried by – you guessed it – the rain.

We accompany a pair of siblings who emerge from a survival bunker six years after the cataclysmic rainfall. They are on a mission to find their father, a scientist who left them in the bunker and simply never returned.

As they join forces with other survivors to travel across the Scandinavian countries, they fight for survival and seek possible answers through the search for their father.

Where to watch The Rain: 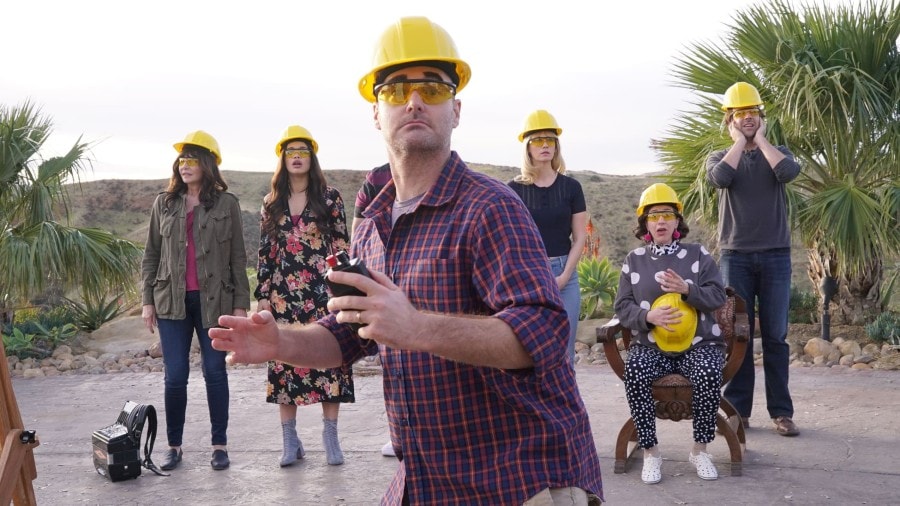 Fox’s The Last Man on Earth is a rare, comedic gem among these best post-apocalyptic TV shows.

Phil Miller believes he’s the only survivor after a virus sweeps the world in 2020. After years of loneliness, he tries to commit suicide but at the last minute, he finally sees signs of life. And then there were two – survivors, that is.

Phil and Carol become the last two people on Earth and believe they have an obligation to procreate and repopulate the world.

Eventually, they encounter more survivors and come together to fight fellow (crazy) survivors, search for a safe place, and deal with the increasing number of pregnant women and newborn babies.

Where to watch The Last Man on Earth: 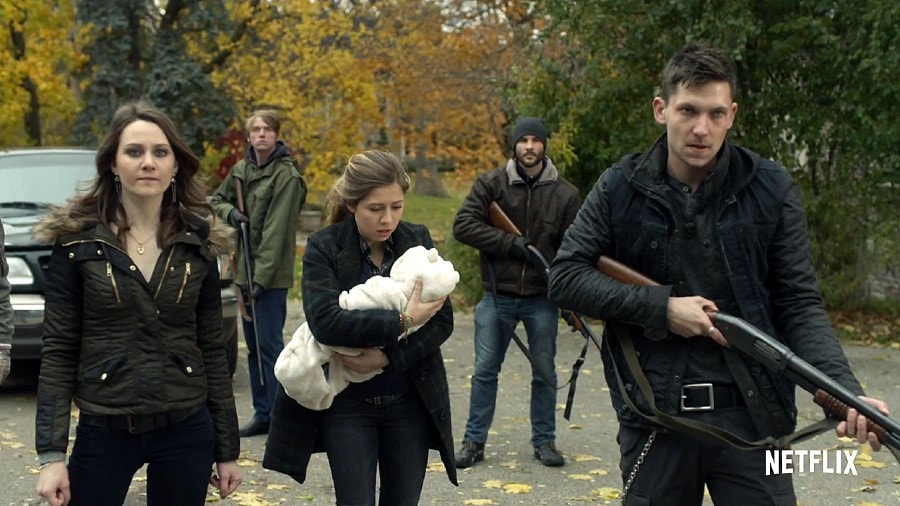 Netflix partnered with Citytv to produce Between, a show that employs a rare perspective on the post-apocalyptic genre with a mix of teen drama.

Set in a town called Pretty Lake, a mysterious disease has wiped out everyone above 21 years old.

The government quarantines the whole city, resulting in a community regulated entirely by angsty teens.

In the true spirit of teen rebellion, many of the survivors seek to escape the quarantine despite the risk of spreading the disease.

Where to watch Between: 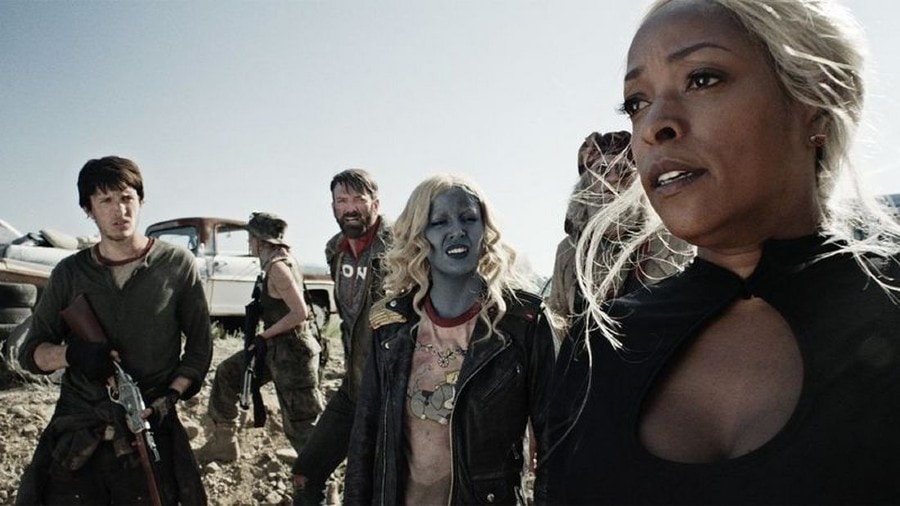 A virus has reared its ugly head again, killing almost all humans and triggering a zombie apocalypse.

Right before this happened, Z Nation’s protagonist Alvin Murphy unwillingly participates in a prison experiment involving potential vaccines for the disease – and he’s the only one who emerges still alive.

Murphy is now the only known survivor of a zombie bite and is the nation’s last hope for a vaccine thanks to the antibodies in his blood.

However, he slowly starts to morph into a human-zombie hybrid and this may have unforeseen consequences on the search for a cure.

Where to watch Z Nation:

TV SHOWS WITH APOCALYPSE-BY-WAR, ALIENS & WHO KNOWS WHAT ELSE 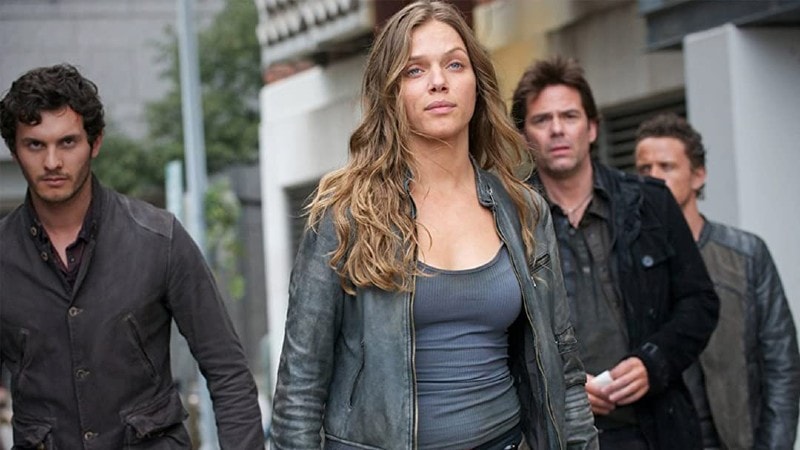 In Revolution, it’s a digital virus that sets the stage in the very near future of 2027.

15 years before the series starts, the entire world experienced what they’re now referring to as The Blackout. It’s exactly what it sounds like: a sudden electrical blackout that basically switched off all forms of electricity across Earth, including transportation.

We join the series’ characters as they have learned to adjust to a world with no electricity. In particular, we follow the Matheson family, who are in possession of a mysterious pendant that could hold the answers on what caused The Blackout and how to fix it.

Revolution was canceled by NBC after two seasons. But a four-part digital comic book was released to wrap up the story.

Where to watch Revolution: 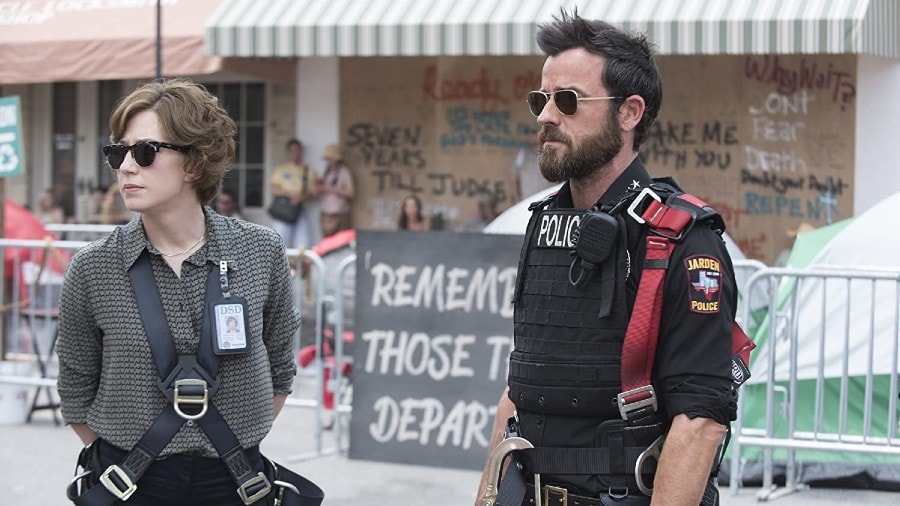 On October 14, 2011, roughly 2% of the Earth’s population mysteriously disappeared. While that’s nowhere near the destruction caused by Thanos’ snap in Avengers: Infinity War, back in 2011 that was still around 140 million people.

In the aftermath of what they called the Sudden Departure, chaos ensued and HBO’s The Leftovers takes more of a religious perspective.

Mainstream religions are no more and in its place are two opposing groups: the Guilty Remnant and Holy Wayne. The story revolves around both the Garvey and the Murphy family as their lives intertwine and they move from city to city in order to deal with the trauma of the Sudden Departure.

Where to watch The Leftovers: 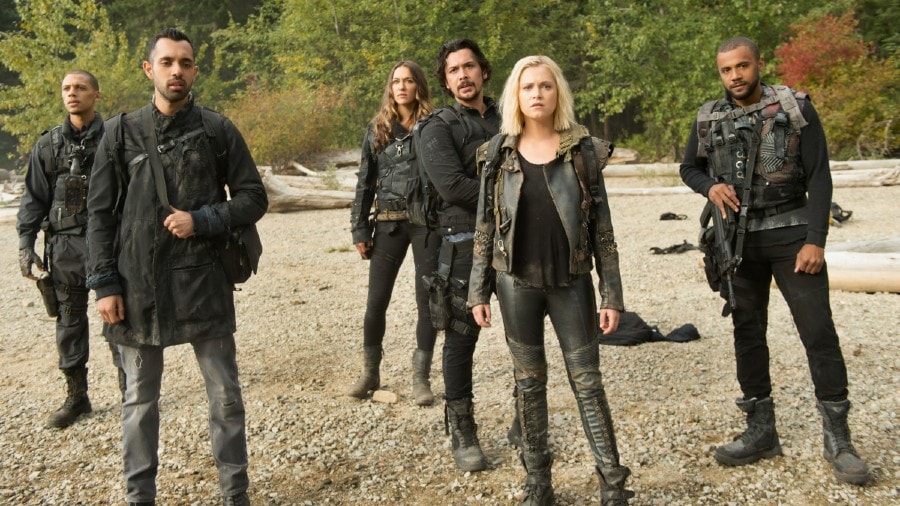 97 years before the series begins, a nuclear apocalypse wiped out almost all life on Earth. In order to keep society functioning, the remaining survivors established a permanent settlement on a space station called the Ark. After three generations born in space, history repeats itself with the threat of over-population.

A group of 100 juvenile criminals is assigned to go back down to Earth to determine if it’s become habitable again.

While there, they discover that there were also survivor groups that formed on Earth over the last century as they were left behind by the Ark. The original group of 100 adolescents needs to find new ways to survive as they go from Earth to a new world in the latest season. 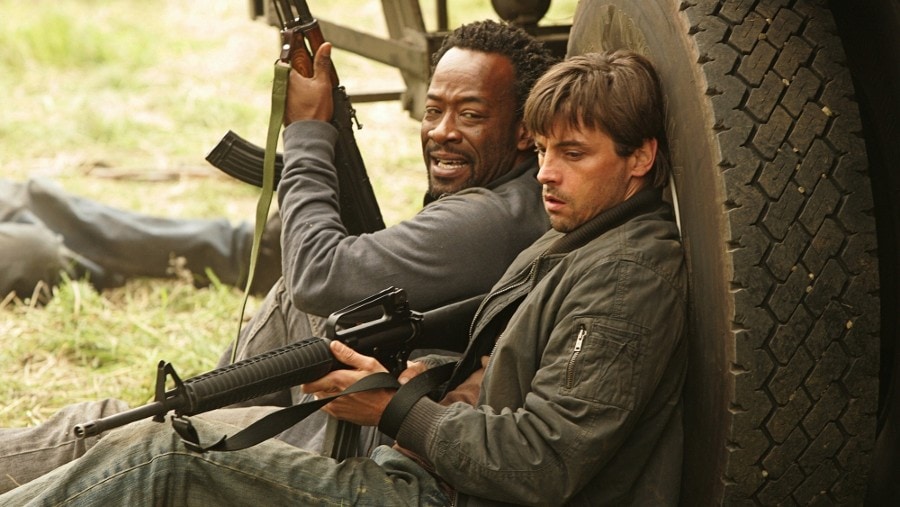 Jericho follows the residents of a fictional town of the same name in Kansas as they attempt to rebuild their lives following a nuclear attack on 23 major cities in the United States.

Though initially believed to be an accident, it’s revealed early in the series that the nuclear bombings were actually deliberate. What starts as a show that simply showed a town rebuilding evolves into an interlaced community involving trade, political relations, and eventually, war.

Jericho was canceled after one season by CBS. But brought back after a fan campaign, only to be canceled again after its second season.

In order to expand and effectively wrap up storylines, the original creators teamed up with IDW Publishing to release two more seasons in the form of a comic book series.

Where to watch Jericho: 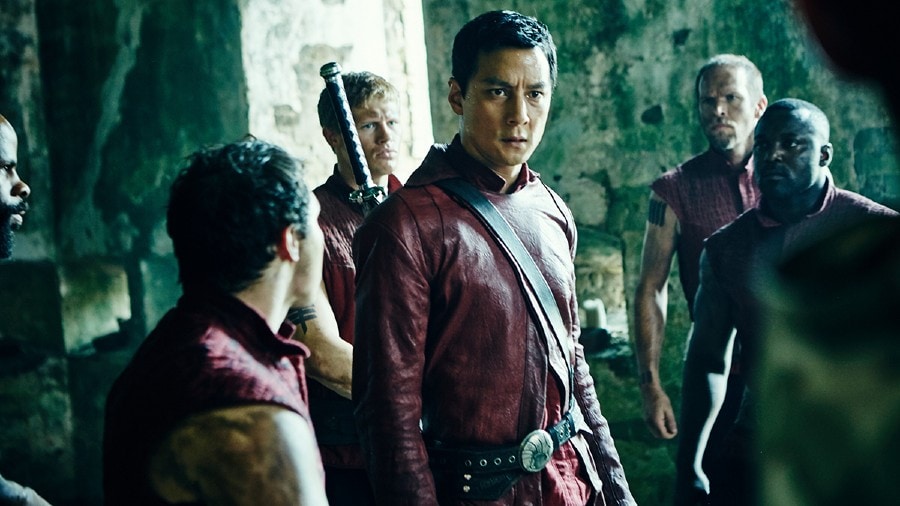 Another post-apocalyptic TV series from AMC, Into the Badlands hones in on a post-apocalyptic world where civilization’s collapse was due to a war. Half a century later, a territory called the Badlands is turned into a feudal society, complete with Barons and his slaves, prostitutes, and warriors captained by a Regent.

However, a post-apocalyptic TV show wouldn’t be complete without opposing groups as a source of conflict, now would it?

In Into the Badlands, the Nomads live an essentially lawless existence, the River King and his people control the water trade, and of course, the rebel group.

There are talks of a utopian city outside the Badlands, but does it really exist? Find out on Into the Badlands!

Where to watch Into the Badlands: 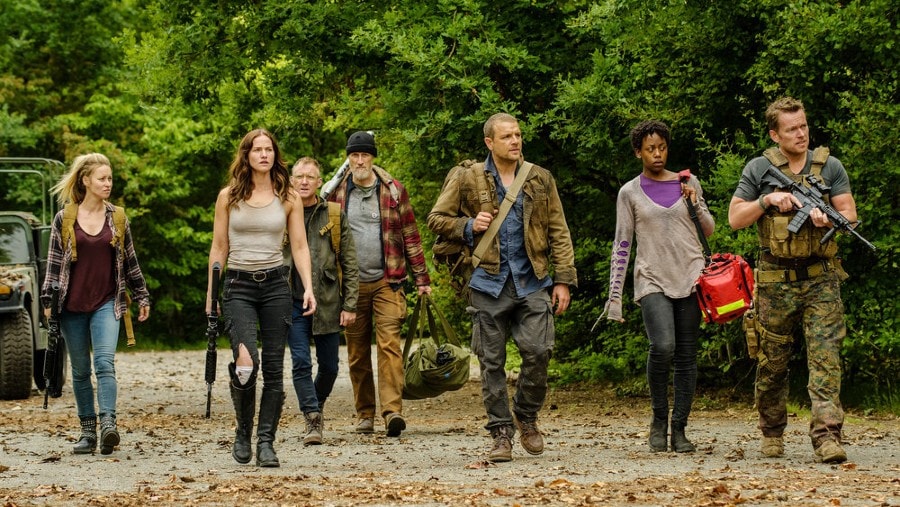 Though the Yellowstone Caldera has been reported as unlikely to undergo another supereruption any time soon, SyFy’s Van Helsing is set in a world where it did, in fact, erupt and wrap the entire world in a blanket of ash.

Because of the darkness encompassing the world, sunlight is non-existent and the vampires have come out of hiding to terrorize humankind.

The show follows Vanessa Van Helsing, alongside the former Marine and the doctor who protect her, as she becomes the leader of a force against the vamps.

That becomes all the more difficult as she also becomes their prime target because of her rare blood – blood that can turn vampires back into humans.

Where to watch Van Helsing: 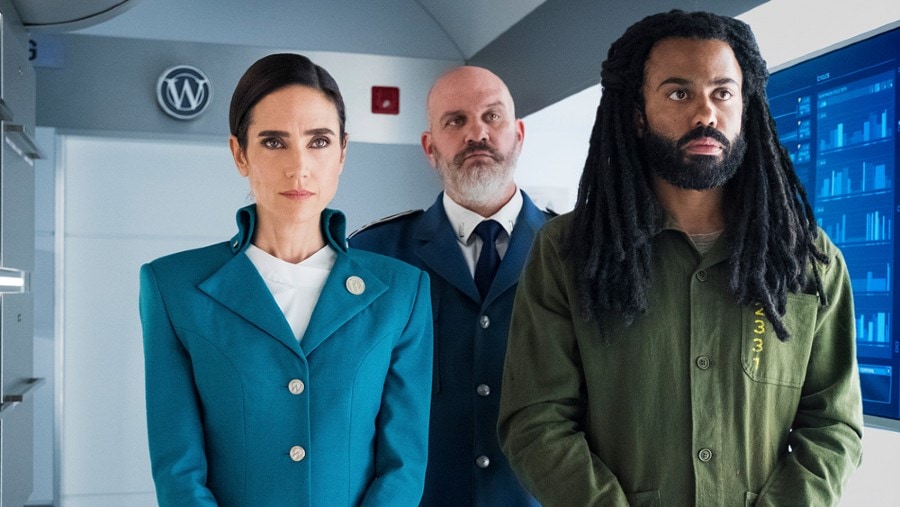 If you’ve seen the 2013 movie of the same name, then you already know that the Snowpiercer series is going to knock it out of the park as well.

Bong Joon-ho, the amazing director, and writer of the original movie, has been retained as an executive producer for the TNT series that premiered in the spring of 2020.

Snowpiercer is set seven years after a horrible climate experiment-gone-wrong ushers in a new ice age, where the humans that remain are forced to co-exist on a gigantic train that circles the frozen globe on a never-ending loop – with each orbit representing one year.

Much like the world before it, the train is divided into representations of social class and how each fight for survival.

Where to watch Snowpiercer: 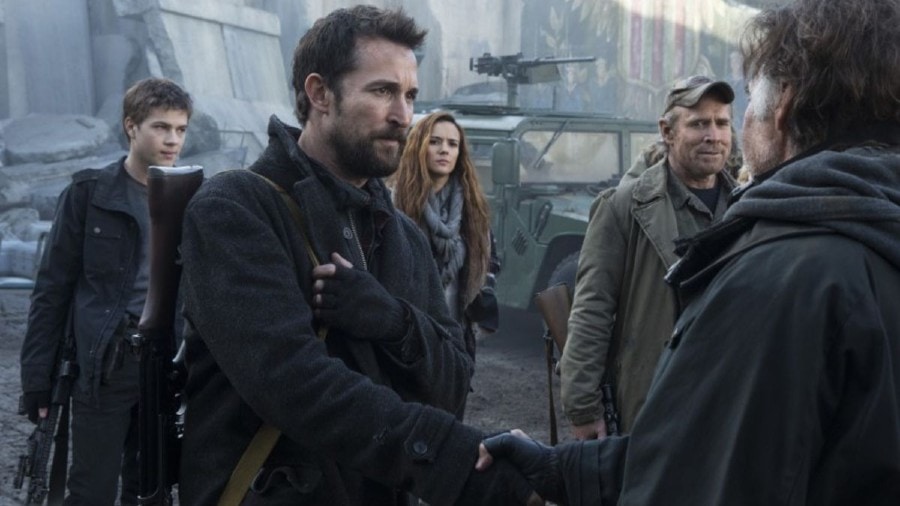 Falling Skies is the only show on our list where the confirmed cause of humanity’s end is an alien invasion.

During their onslaught on Earth, they practically eradicate technology, annihilate militaries, and kill over 90% of the population. A group called the Second Mass is formed, comprised of survivors and fighters under the leadership of former US Army colonel Dan Weaver and former history professor Tom Mason, who uses his knowledge of historical military practices to fight against the invaders.

As the series progresses through its five seasons, we find out what the aliens’ intentions were behind the attack on Earth, as well as why it even started.

Where to watch Falling Skies: