Who doesn’t love a good zombie flick? However, zombies aren’t reserved for just movies. There are several awesome TV series featuring or even starring zombies. So, I thought I’d do a list of the best zombie TV shows currently around.

Among these zombie TV series, there are both comedies and more dramatic, borderline horror-like zombie series. But all of the shows in one way or another have zombies in them. And I guarantee that while watching these shows you will get a good education on all aspects of zombies and zombiism. On with the list of best zombie shows! 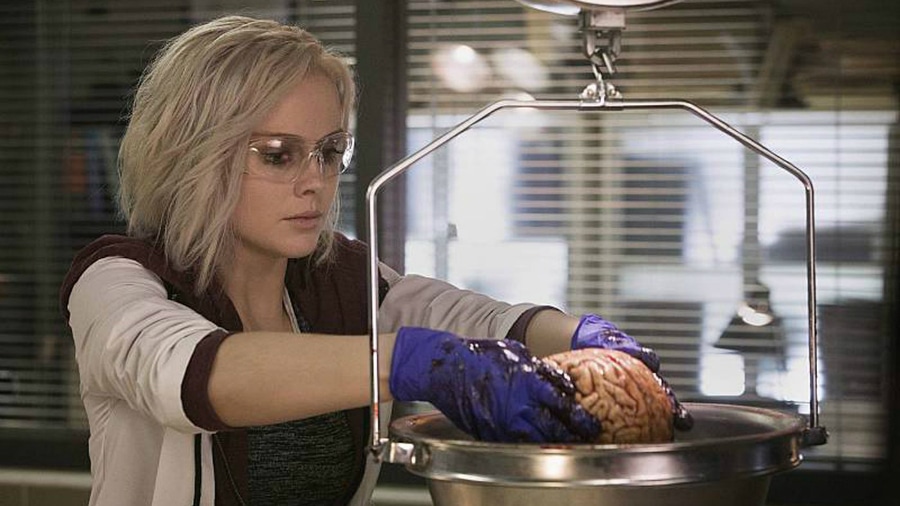 The CW’s iZombie tells the story of Liv Moore an ambitious doctor who gets turned into a zombie and takes a job at the Medical Examiner’s Office to have access to zombie food of choice aka brains. But, it turns out that iZombie’s version of zombies take up the personality traits of the person whose brain they eat. As well as get some of their memories via visions. So soon enough we see Liv team up with a Seattle PD detective Clive Babineaux and her boss Ravi Chakrabarti to solve murders while navigating different personalities and other people’s memories.

If you are looking for a zombie show that is more funny than scary, then iZombie will definitely be for you. This show offers fun storylines, diverse and engaging characters. And it’s all set to a backdrop of a bigger mystery of who else knows about zombies. And did I mention that the show also has that serialized procedural aspect to it, because each episode we see Team Liv solve murders? Yes, iZombie has everything. No wonder that the show has survived for five whole seasons.

Where to watch iZombie: 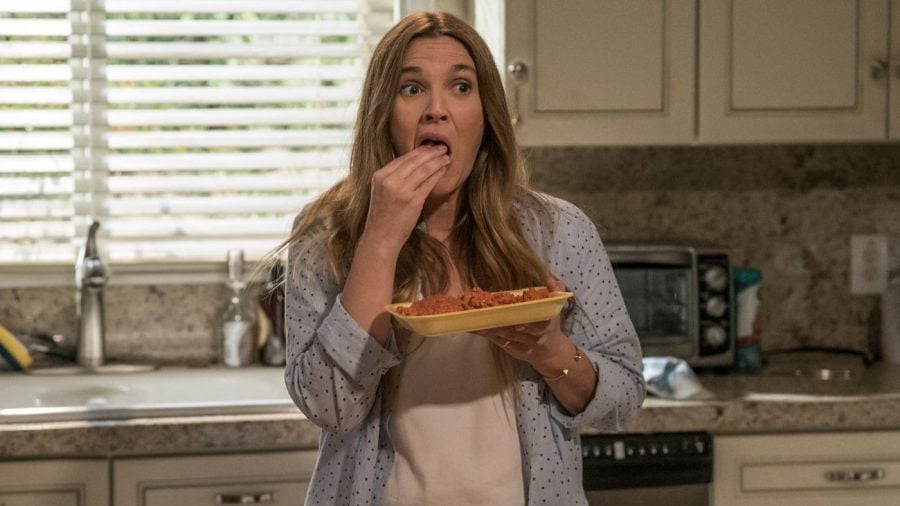 For another less scary option of a zombie TV series, there is Santa Clarita Diet.

Lead by Drew Barrymore and Timothy Olyphant, Santa Clarita Diet follows Sheila, Joel, and Abby Hammond, an average Californian family of three. When suddenly Sheila develops a craving for human flesh. Meaning that somehow she has transformed into a zombie. So throughout the show’s half-hour episodes, we get to see the Hammond family trying to navigate Sheila’s new condition. And let me tell you trying to find food aka humans for Sheila to eat while also trying to keep what they’re doing from everyone around them isn’t easy.

This zombie show is unique in the fact that at its core it is a family comedy. Yet, the zombie twist puts it at odds with that comedy core giving it also a horror twist. Santa Clarita Diet is a really interesting and fun watch. And if you love Drew Barrymore then this TV show must be on your TV watch list. So make sure you binge the first three seasons on Netflix now! It might even help eventually save Santa Clarita Diet after it was recently canceled by the network.

Where to watch Santa Clarita Diet: 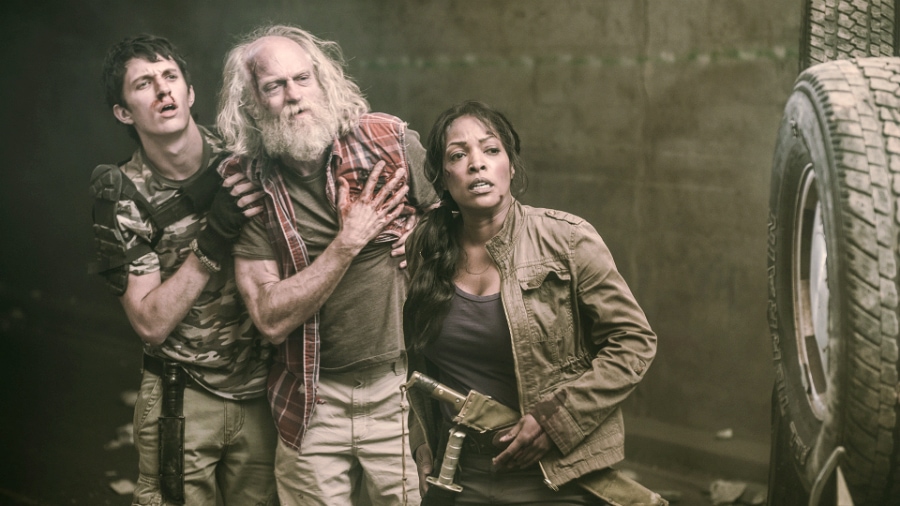 Then there is SyFy’s Z Nation. A show that takes on the zombie genre without trying to be too serious about it.

Z Nation is set in a world that has been devastated by a zombie virus dubbed ZN1. Those who didn’t become zombies are trying to survive the zombie apocalypse the best they can. And, although the situation for the survivors is pretty dire, all hope isn’t lost. Because there is a man, an ex-prison inmate named Alvin Murphy whose blood might hold the key to a zombie virus vaccine. So over the course of the five seasons of the show, we follow a group of people fighting hoards of zombies and anything else the apocalypse throws at them.

When I say that this show doesn’t take itself too seriously… I am not saying that it still isn’t scary at times. Don’t get me wrong, Z Nation has zombies, scary ones. Yet the show also has a lot of comedy in it, making it the perfect mix of horror, action, and comedy. So if you enjoy the scary aspects of scarier zombie movies. Yet also want to see some lightheartedness among all the horror, definitely, check out Z Nation.

Where to watch Z Nation: 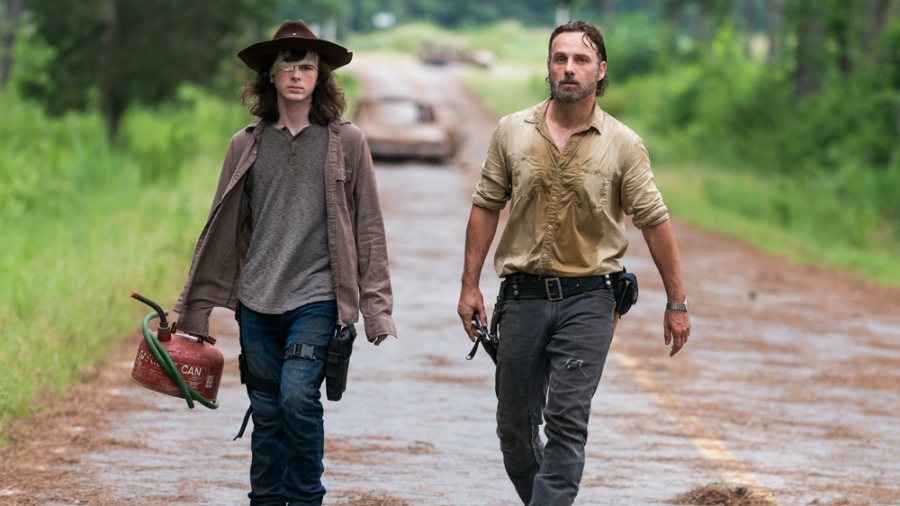 The one show that probably comes to mind for most people when somebody mentions TV shows about zombies is The Walking Dead. And for good reason, because this zombie TV show is about to air its tenth season and doesn’t intend on stopping anytime soon.

The Walking Dead, much like Z Nation, is set in a worldwide zombie apocalypse. Where zombies aka walkers hunt humans. And humans, in turn, try not to get bitten or scratched by a zombie or die since in all of these cases the human will turn into the living dead. And the series in many ways centers on Rick Grimes. A sheriff’s deputy who wakes from a coma only to discover the epidemic of the undead. Thus during the first season, we see Rick forming a group that fights to survive in this post-apocalyptic world.

So if you love horror flicks and don’t mind to be scared while watching a TV show, then you should definitely give The Walking Dead a show. This show is not for the faint of heart. But it is a zombie show true and true. Scary zombies, gruesome deaths, drama and all. Therefore if you are a fan of all that, The Walking Dead will for sure be your cup of tea.

Where to watch The Walking Dead: 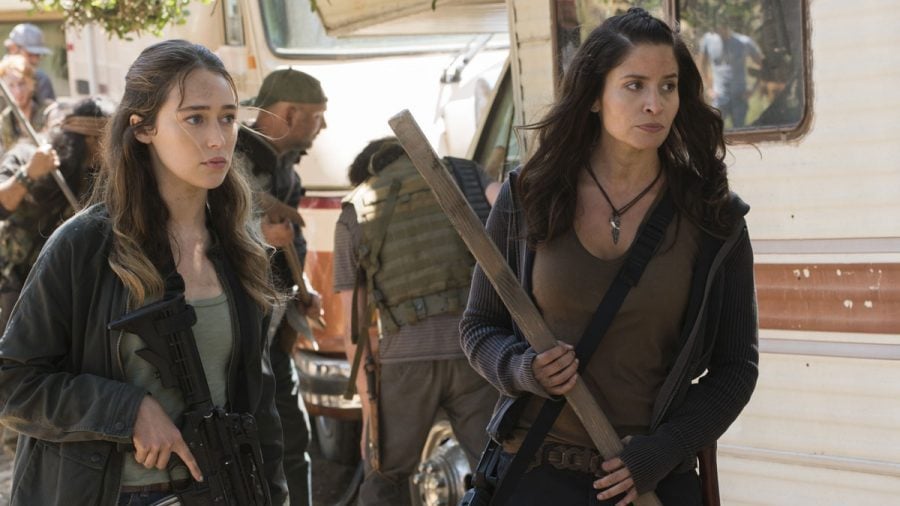 Speaking of The Walking Dead… If we are talking about that show, we can’t forget to also mention Fear the Walking Dead. The Walking Dead’s spin-off that also is enjoying quite the success with five seasons already under its belt.

While The Walking Dead focuses on a group of people banding together to survive the zombie apocalypse that is in full swing. Its spin-off hones in on the events of the very beginning of this catalytical event. It is a prequel of sorts. Because Fear the Walking Dead centers on mother of two Madison Clark. Her two children Alicia and Nick and her fiancee Travis, as they and other like-minded people try to grasp what is happening around them. And how to last in a world that is overrun by zombies.

No matter if you are a fan of The Walking Dead or not. If you love zombies. And like seeing people learning to survive the zombie armageddon, then Fear the Walking Dead might be just for you. On top of that, this show also has a stronger family aspect to it. And it definitely is a little less post-apocalyptic than its companion show. Which are just more reasons to watch Fear the Walking Dead. Who knows, you might even learn a thing or two should we ever face a similar scenario.

Where to watch Fear the Walking Dead: 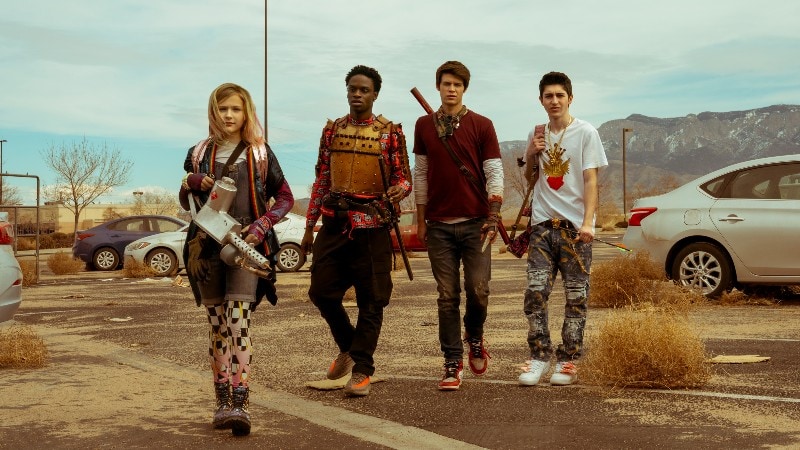 Then there is the Netflix series Daybreak, a zombie dramedy that features Mad Max-worthy gangs and many crazy scenarios.

This show takes place in Glendale, California, in a post-apocalyptic world that was destroyed by bombs containing bio-agents, which turned all people over the age of 18 into ghoulies, blood-craving zombie-like creatures that walk around repeating their final thoughts before the apocalypse started over and over. We follow the series protagonist, a 17-year-old Josh Wheeler, as he searches the wasteland-like world for his girlfriend Sam with his ragtag group of friends that includes Angelica, who Josh babysat before the bombs went off, and Wesley, a high school bully turned wannabe-samurai.

If you want to see a more teen comedy twist on the whole zombie apocalypse thing then you should definitely check out Daybreak. And even though the show got canceled after only one season, it will make for a great binge filled with over-the-top costumes and doomsday-elevated high school cliques.

Where to watch Daybreak: 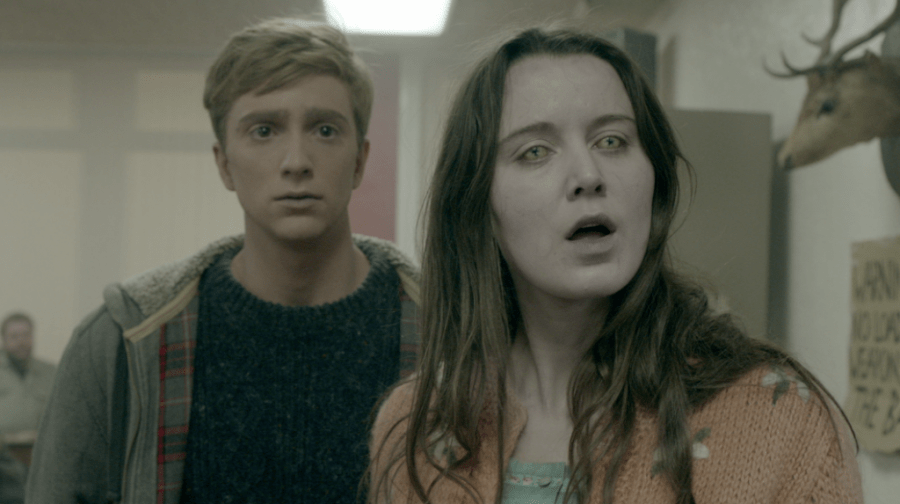 And last but not least on this list of best zombie TV shows is In the Flesh, a British variant on TV shows about zombies.

This BBC Three drama takes place in a Lancashire village. In a world where the zombie apocalypse aka The Rising has been warded off. And scientists have figured out how to turn zombies back to humans. At the center of it all is Kier Walker. A former zombie who returns home after being rehabilitated and now has to learn how to live with the loss of his best friend and the lives he took while he was a zombie.

If most of the series depicts the life of zombies or humans during a zombie uprising. Then In the Flesh is unique in that it shows what would happen if zombiism was cured and zombies could be turned back to humans. Which in itself is an interesting way to take on the zombie genre. And therefore is even more interesting to watch. So if you are curious to see how life after a zombie apocalypse could look like, take a peek at In the Flesh.

Where to watch In the Flesh: