Another Sunday has gone which means that we got another beautiful episode of Heartland. And this one, titled “Legacy” saw many exciting things including the return of Casey and Lou considering a career change. Wanna know more? Then keep on reading this Heartland season 13 episode 8 recap!

When it comes to this latest episode of Heartland multiple storylines of it revolved around The Hudson Heritage Rodeo, a big rodeo event being held right there in Hudson. And this time, the rodeo also brought back a character that we haven’t seen since season 11. That’s right, Casey was back in Hudson since she was the one organizing the rodeo. And she had an interesting offer for Tim.

The last we heard of Casey was when Tim went to propose to her at the end of season 11. And then admitted to Lou in season 12 episode 2 that he didn’t go through with it. Yet this episode revealed what really happened between the two exes.

Apparently the two had decided together not to get engaged. Which, of course, ended their relationship as well. And the two hadn’t seen each other since. So, it was a surprise for Tim to see Casey back in Hudson. However, it wasn’t the only thing surprising about Casey’s return. Since we found out that Casey is not only engaged. But that she is also looking to sell her rodeo company. And wants Tim to be the buyer.

As you might expect, Tim was shocked to hear that Casey was engaged so soon after they had broken up. And he was also reluctant to buy Casey’s company. But once he saw the money her company was making Tim quickly did a 180 and agreed to buy Casey’s business so she can move to New Mexico with her new fiancé Greg.

During the episode, we saw Tim helping Casey organize the rodeo to get some first-hand experience of what it means to run a rodeo. Which meant that all episode long Tim was running around and barely had time to talk to Jack let alone think about what it would really mean to buy the business from Casey.

However, when the rodeo was underway and Tim finally had time to talk to Casey about why they didn’t work out, Casey admitted to Tim that he was challenging to date. And that Casey never knew what she’s going to get with Tim. Not like she does with Greg. Which made Tim deciding not to buy Casey’s company all the more easier. 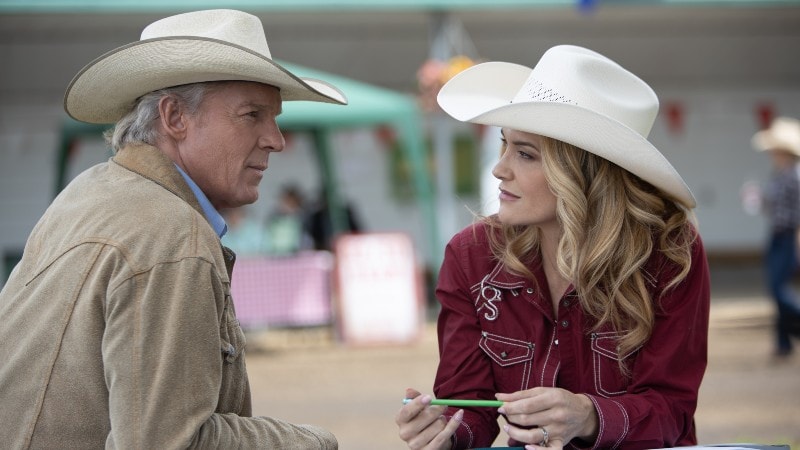 So, in the end, Tim and Casey made a clean break. And parted their ways seemingly forever. Will it really be forever though since Casey wasn’t happy to hear Tim retracting his offer to buy her company? We will have to wait and see. But I have to say, this episode really made me think that this indeed was the right decision for the two characters. Because as much as I love Casey, she and Tim really wasn’t the perfect fit.

Speaking of the rodeo, while in the midst of planning it Tim asked Jack to contact some rodeo hall of famers from way back in the day. And since Jack liked the idea of catching up with friends he hasn’t seen in a long time, he accepted the task.

Yet, when Jack when to visit the people that made the rodeo what it is now, he saw how much most of them were struggling. Both when it comes to their health and not having enough money to get the additional help they need. Since earning a living by riding broncs didn’t exactly come with a pension plan. So, Jack had an idea to start a foundation that would offer the old-timers a bit of financial support.

He even got together Tim, Casey and the other owners of rodeo companies and asked them to donate a small percentage of their proceeds to this foundation. However, when Jack’s request fell on deaf ears, he figured that this was too important of a cause not to do something about it.

So, Jack and the rodeo legends that came to the Hudson rodeo did a protest during Tim and Casey’s opening speech by holding signs that read “hypocrites”. And luckily, Tim didn’t just brush Jack off.

He actually gave Jack a chance to explain what they were protesting, promised to donate all the earnings from this rodeo to the foundation for retired rodeo competitors and even publicly asked the other rodeo company owners to do the same. Which means that, in the end, Jack achieved his goal and made sure that the people who made rodeo legendary weren’t forgotten. What an amazing thing to be remembered for, am I right?

But that wasn’t the only big announcement that was made during the rodeo’s opening ceremony. Because Lou also announced that she was running for Mayor of Hudson. And I know what you’re probably thinking right now… How did that come about? Well, let me back up a bit.

At the start of Heartland season 13 episode 8, we saw Amy eating breakfast at Maggie’s. During which Lou was going on about J.D. Werth, a wealthy developer running for Hudson’s Mayor. And when he stepped into Maggie’s saying that if people voted for him, they’d be voting for progress, Lou’s curiosity got the better of her and she asked Mr. Werth what exactly he meant by that.

The mayoral candidate then went on to explain that it meant that he would be revitalizing Hudson. Which didn’t sit right with Lou. So, Lou dug a little deeper and did not like what she found.

It looked like J.D. was dead set on changing Hudson. Which made Lou at least consider running for Mayor. But when she found plans of J.D. building a big chain restaurant right next to Maggie’s in his campaign office. And then J.D. boasted that his only competitor had dropped out of the mayoral race so he’s announcing himself as Hudson’s new Mayor at the rodeo Lou had enough. She jumped up from her seat and declared that the people of Hudson have the right to choose their next Mayor by voting. 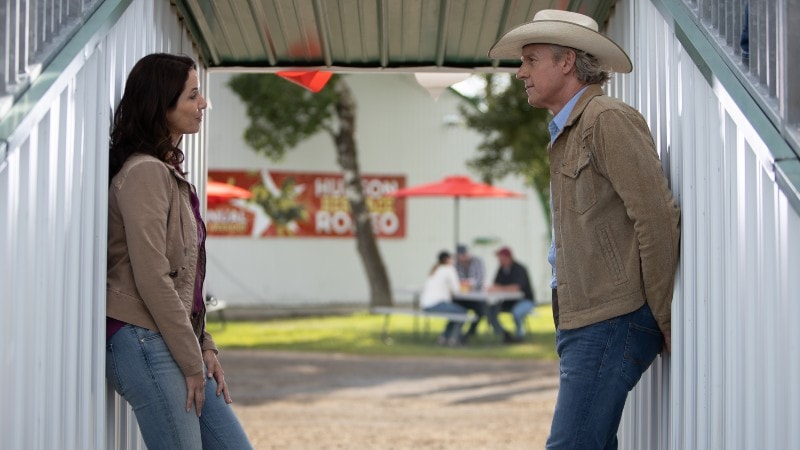 That got a lot of cheers. And with that encouragement, Lou ran down into the arena, took the microphone from J.D. and officially announced her candidacy for the Mayor of Hudson. It looks like we’re in for interesting two final episodes of the season. Especially since Tim promised to help get Lou elected.

The final big storyline of the episode saw a little friendly competition between Georgie and Jade.

At the end of the last episode, we saw Georgie ask Quinn to leave and then realize that she made a big mistake. So, this episode Georgie was trying to deal with that decision. Pair that with her trying to figure out how to be roommates with Jade and you got yourself a pretty closed-off, serious Georgie. Which is why people around her were trying their best to get Georgie’s mind off Quinn.

At first, Jad tried to get Georgie to talk about Quinn moving back to Florida. And then Amy offered her to go to Fairfield to try out Lisa’s new showjumping horses. But when Georgie declined Amy’s offer and Amy offered Jade the opportunity it sparked a debate between the roommates on whether Jade could handle riding a jumping horse and Georgie – riding a bronc. And Amy quickly turned that into a little friendly competition.

Amy taught Jade how to ride a jumper. While Caleb showed Georgie how to rope a calf. And after an afternoon of lessons, both girls got to show off her new skills. Jade on Lisa’s new cross-country course. And Georgie by roping an actual calf.

In the end, Georgie and Jade agreed to call it a draw having proven to each other and to themselves that they could do it. And Jade even said that she’s sorry about Quinn leaving. But sadly, even this little distraction didn’t get Georgie’s spirits up. So, hopefully, we will see some kind of ending to Georgie and Quinn’s story in the last two episodes of Heartland season 13. I’m hoping that it would be via Quinn returning to Hudson. But you never know!

Although Ty wasn’t really in this episode, we still saw a video chat between Amy and Ty much like we did the previous episode. Which was a nice tidbit for all us Tamy fans out there. And which also gave a bit of information on the progress on Amy and Ty’s house. Because, apparently, Lee, their contractor, is finally framing the house. And that means that Ty and Amy’s dream home is finally becoming a reality.

Finally, I also wanted to mention the storyline on Amy and Spartan that this episode had. Because it seemingly continued the story that we saw start in the last episode.

In the previous episode, we saw Amy doing liberty work with Spartan and him not responding to Amy’s ques as well as he usually did. While this episode Amy was jumping Spartan on Fairfield’s course and the horse got hurt. It was just a sprained ligament in Spartan’s leg. But it still made Amy acknowledge that Spartan is getting older and that she needs to be more careful with him. And I have a feeling that we might see some kind of conclusion to this plotline in the next episode or two.

Lou: “My name is Lou Fleming. Many of you know me as the woman who pours your coffee down at Maggie’s. But I am more than just a business owner, I’m also a proud member of this community. This rodeo is a celebration of Hudson and of everything that generations of people have worked so hard to build. And I want to protect that. Which is why I’ve made the decision, I’m officially throwing my hat in the ring and I, too, will be running to be your next Mayor of Hudson.”

Jack: “I’ve seen you perform a hundred times in this arena and I knew you’d come through. But I gotta say, out of all the great rides you’ve made and all buckles you’ve ever won, what you did today… I couldn’t be more proud.”
Tim: “I’m still mad at you.”

And here’s a quick look at the next Heartland episode titled “Fight or Flight” which airs on Sunday, November 17th: