We are already halfway done with the thirteenth season of Heartland, but the season is only getting better and better. Case and point, this episode. In which we saw Amy and Ty’s business pick up again. As well as Luke’s mom coming for an unplanned visit. Lou and Mitch going on a weekend getaway. And Jack and Tim looking for Tim’s horse Champ. Want to know more? Then keep on reading this Heartland season 13 episode 5 recap!

After the breakthrough Ty had with Kirk in the previous episode, Ty and Amy’s business was finally back on track. And this episode we saw their first new client – Colette. A wealthy woman with a knack for collecting things.

One of her prized possessions, a beautiful Gypsy Vanner named Ophelia, was having some trouble after the storm. Luckily, right at the start of the episode Ty and Amy let Colette know that Ophelia wasn’t traumatized by the storm, she just had an infection in her legs. But since Colette’s barn did suffer significant damages Colette asked Amy and Ty to house Ophelia for the weekend. Who, of course, agreed. With Georgie even offering to exercise Ophelia.

But while doing so Georgie realized that Ophelia wasn’t made for standing in a field. To prove it Georgie even hooked the horse up to a wagon and took Katie on a ride with it, since Katie was so excited to have a Gypsy Horse at the ranch. And brushed up on her mounted archery skills. Yet, Amy wasn’t pleased with Georgie pushing Ophelia so much. After all, Colette was their first client in a long time. And therefore, Amy and Ty didn’t want to do anything to jeopardize that. 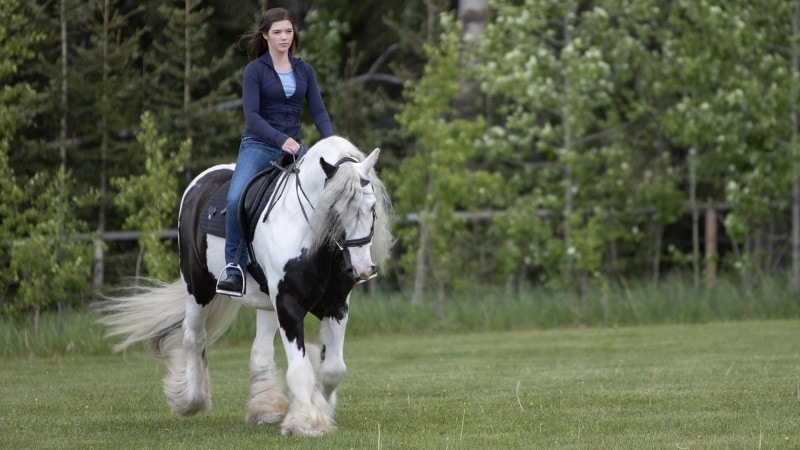 However, Georgie didn’t see it that way. She even told Amy that she was thinking more about the wellbeing of their business than the horse. And Colette that she shouldn’t treat Ophelia like a piece of art. Which Colette was not happy to hear. At least at first. Because after thinking it over, she returned to Heartland to tell Georgie, Amy, and Ty that Georgie was right. And asked them to help her put Ophelia’s talents to use. So, it looks like Ophelia is staying in Heartland a little while longer.

The second main storyline of this episode was all about Luke’s mom coming for an unexpected visit.

If you remember, at the end of last season Amy and Ty took Luke in and became his foster parents after Luke’s mom Andrea had a manic episode followed by a depressive one. And then in episode 3 of this season, Andrea canceled Luke’s visit saying that she did not feel well.

Yet this episode Andrea suddenly showed up claiming that she had a surprise for Luke. Ty and Amy, of course, were concerned. Not only because the visit was unscheduled. But also, because they didn’t want Luke to get his hopes only for Andrea to get worse and leave again. And for good reason, gifting Luke an expensive drone and taking him to Calgary for a movie was similar to how Andrea was before she seeked treatment for her bipolar disorder.

Fortunately, by the end of the episode, Andrea and Amy managed to get over their fears and concerns and actually come to an understanding.

With a little help from Amy Andrea realized that although Luke might be happy living at Heartland now, she didn’t have to worry about Luke wanting to stay there permanently. Because Luke will never be as happy at the ranch as he will living with his mom again.

While Amy came to grips with the fact that Luke might be leaving Heartland sooner than they thought. Since Andrea was determined to do everything in her power to get well. So, hopefully, by the end of the season, we will see Luke reuniting with his mom for good. And Ty and Amy not being too upset about Luke leaving the ranch.

Tim and Jack were on their own quest during Heartland season 13 episode 5. One that included looking for a missing horse.

At the beginning of the episode, we found out that all horses but one had returned to the ranch after the storm. The one missing? Tim’s horse Champ. So, Jack and Tim spent the majority of the episode looking for the missing horse. And Tim even employed some interesting methods to do so.

When Jack and Tim’s search for Champ at Heartland yielded no results they went to Sam, High River’s new owner, and asked if they could look around for Champ there. Since it was Tim’s property for a long time and Champ might have gone there after the storm. But when Sam refused to let them look around Tim got suspicious. After all, Sam did express particularly close interest in Champ the first time he saw the horse.

So, what did Tim do? He borrowed the drone Luke’s mom gifted Luke and took it for a spin over Sam’s property. And all was well until Sam spotted the drone and promptly shot it down with his gun. 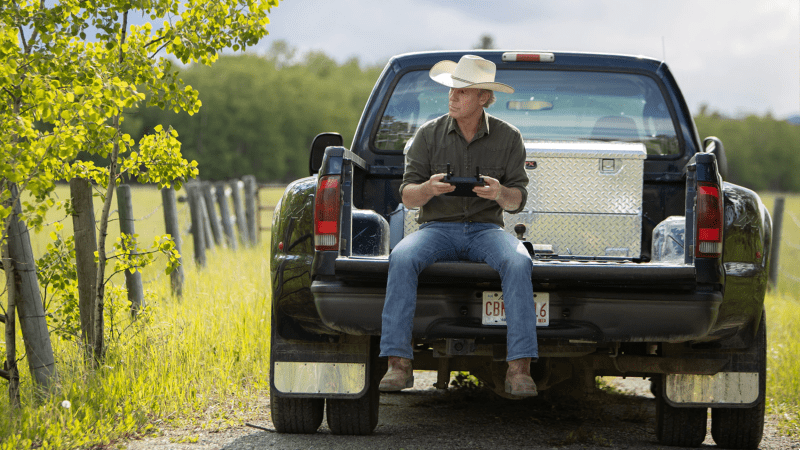 Luckily, Tim did get a replacement for Luke. And while flying it around Jack’s property Katie and Luke spotted Champ in a herd of wild horses. Meaning that in the end, Tim got his horse back after all. Now the only two questions remaining are what was Sam hiding? And will he figure out that Tim was the one spaying on him via the drone?

While the fourth big storyline of this episode saw Lou and Mitch going on a romantic weekend getaway. That, of course, hit a few snags along the way.

Lou had rented a beautiful cabin for her and Mitch to spend some time in over the weekend. However, first, they made a wrong turn and ended up at a run-down ranch that got Mitch dreaming about having his own place someday. And then when they finally arrived at the real cabin it looked nothing like the pictures online. What’s more, there was old food on the table and even mice. However, somehow Mitch and Lou managed to get the most out of a bad experience. After all, the weekend was about them spending time together.

But being just the two of them also brought up the subject of moving in together again. Mitch was all about calling the realtor first thing on Monday and getting the ball rolling on a place for him, Lou and Katie. Yet Lou was being cagey about the whole thing. And when she finally got up the courage to tell Mitch what really was going on Lou admitted that she didn’t want to rush into things like she always does. That she wants to get her relationship with Mitch right.

Luckily, Mitch was on the same page. And came up with the perfect solution – buying a vacation home. One that’s near enough to Hudson so they could spend time there over the weekends or on holidays. While also being far away that they could actually get away from their crazy lives. And we even saw them actually buy a ranch at the very end of the episode. How’s that for not rushing into things, right? Although they did give the ranch a beautiful name – Aspen Grove Ranch.

The one unexpected thing that I really liked about this episode was the interesting relationship between Andrea and Amy. At the start of Heartland season 13 episode 5, we saw them not really getting along. Which mostly stemmed from them not trusting each other. But by the end of it, they had formed a sort of an unlikely friendship. And I definitely wouldn’t mind seeing Amy and Andrea becoming good friends down the road.

Secondly, I really loved the show’s references to fairytales this episode. Not only was the episode called “Fairytale” but all episode Andrea kept calling Heartland a fairytale. And Ophelia looking like a real-life unicorn only enforced that viewpoint.

Luckily, Amy set Andrea straight when she said that fairytales aren’t real. But I have to admit, there have been many times when I have thought that Heartland really does look like a fairytale. And it was nice to hear the show acknowledging that on screen.

Andrea: “That horse you were riding could be in a storybook. This whole ranch could be in a storybook. I thought that if I bought Luke an expensive gift and took him to see a movie that he would think that I was just as exciting as this place.”
Amy: “You don’t have to prove anything to Luke.”
Andrea: “That’s easy for you to say. You should hear how he talks about Heartland. Like it’s a fairytale.”
Amy: “Andrea, that’s the thing about fairytales, they’re not real. Luke wants to be with you more than anything in the world. That’s real.”
Andrea: “I just don’t know if I’m ready yet. But I will be. I’m going to do what I need to do to get well and to say that way. Next time I come, I’m going to be the kind of mom that Luke deserves.”
Amy: “I believe you.”
Andrea: “Okay, I should go.”
Amy: “Hey, Andrea? You’re making it hard.”
Andrea: “What?”
Amy: “To not like you.”

And lastly, check out the promo for Heartland season 13 episode 6 titled “A Time to Remember” in which we will see Georgie graduating high school and Mitch, Tim and Jack considering a big step for their cattle business.