With the spooky season right around the corner and Halloween slowly dawning on us, aren’t we all looking for that dose of the supernatural in our daily lives? Maybe you’re binge-listening to your favorite horror podcasts, obsessively streaming every scary movie on Netflix, or shopping online for crossbones- and pumpkin-printed clothes for the entire month of October – all of which I am unashamedly guilty of, by the way! When you’re done with all that, we here at TV Show Pilot are ready to keep the supernatural coming.

In this list, we’re putting the spotlight on a supernatural creature that’s significantly less human (as most are) and much more, well, animal. That’s right, we’re talking about werewolves! More specifically, we’ve put together a list of TV shows about werewolves – whether as central or supporting characters.

And after you’re done watching these werewolf shows, keep the spooky vibes coming with our list of shows about vampires, about witches, about zombies, or even about cults (because sometimes, humans can be just as creepy as the supernatural)! 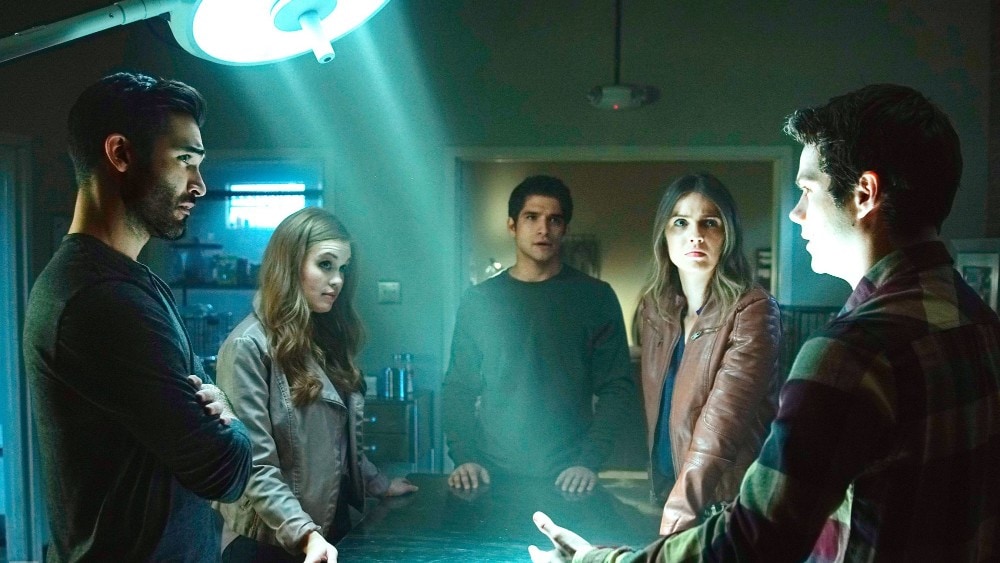 Beacon Hills, California – an appropriate name for a town that’s literally a beacon for all kinds of supernatural creatures. That’s the setting for MTV’s Teen Wolf, a show that’s inspired by the 1908s films of the same name but shares no continuity with them.

Scott McCall is a lacrosse-playing high school student who gets bitten by an Alpha werewolf while out on a misadventure with his best friend, Stiles, right at the series premiere. Under the guidance of Derek Hale, a Beta-turned-Alpha from a prominent werewolf family that is born with the wolf gene, Scott learns to control his strength and newfound power. Eventually, Scott makes it his mission to protect his friends, loved ones, and Beacon Hills residents from shapeshifters, nogitsune, kanimas, lampreys, Garuda, fellow werewolves, and all other creatures that find their way into his territory. 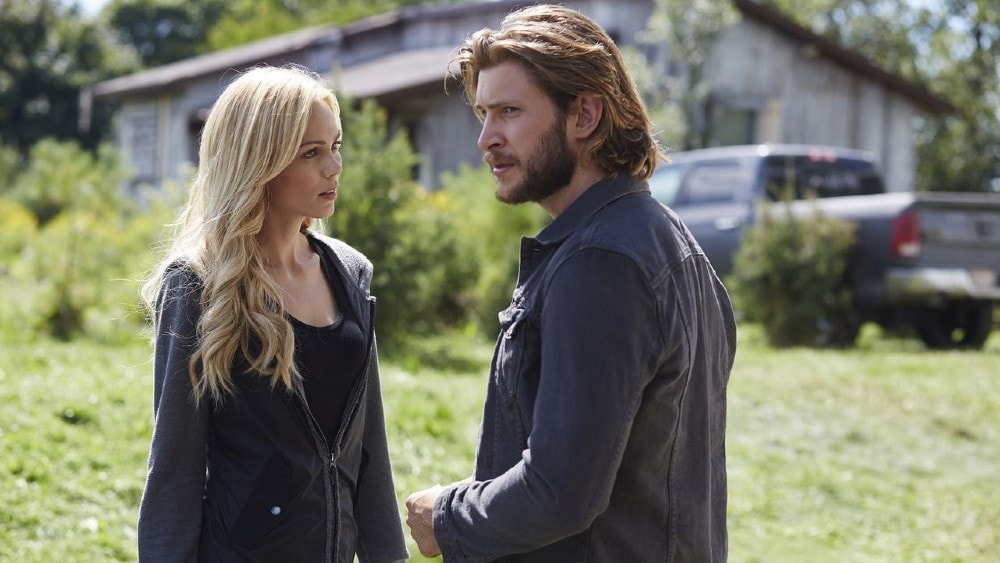 Bitten is a Canadian supernatural fantasy series based on the Women of the Otherworld book series by Kelley Armstrong, which features various supernatural beings and is told from the perspective of a woman.

As such, Bitten was titled after the first novel in the series and tells the story of Elena Michaels, a werewolf. Not only is she a female werewolf, but she is the only known female werewolf in existence. She was turned by her former fiancé and now she wants nothing to do with him or the world he threw her in. She attempts to start a new life in Toronto and a new relationship with a human, but when something threatens her family and her former pack, Elena is torn between helping them and living a normal life.

Though Werewolf only ran for one full season, it was still pretty jam-packed with 29 episodes – including a two-hour pilot! It was also one of the first original shows on the Fox line-up, as it aired during the network’s inaugural broadcast season.

Werewolf follows the story of Eric Cord, a pretty average college student. His life gets turned on its head when he witnesses his roommate Ted transform into a werewolf. Eric shoots him with a gun loaded with silver bullets, given to him by Ted himself for that exact purpose, but he manages to get a bit into Eric before dying. Now, not only is he a giant werewolf but he’s also wanted for his roommate’s murder. Desperate to break the curse, he sets out to find the source of his bloodline. 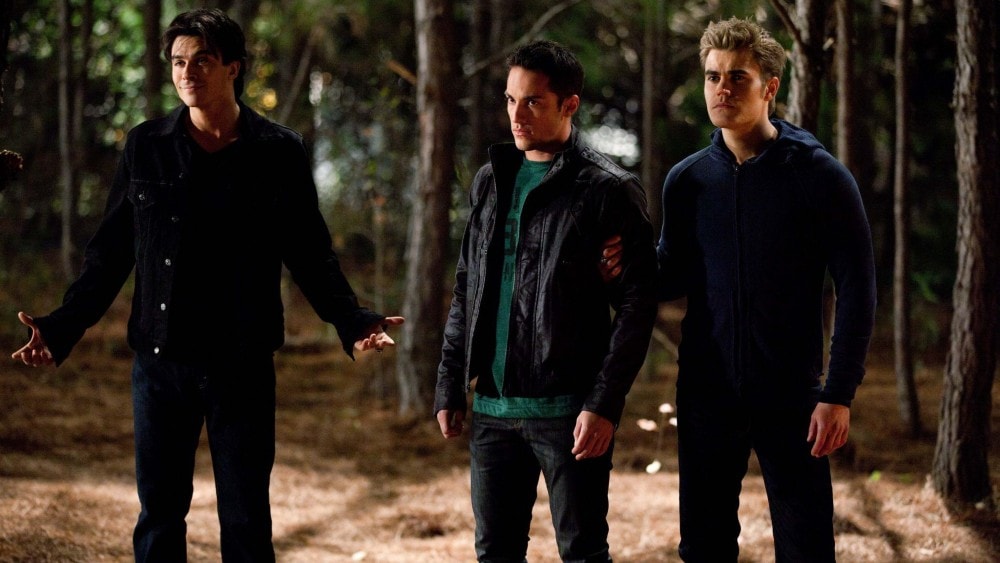 The Vampire Diaries is based on the series of books of the same name written by L. J. Smith and it gained such a following that it eventually led to a large franchise of connected works including spin-offs, a web series, and even a DC comic book series!

Set in Mystic Falls (yet another sleepy town with a telling name), The Vampire Diaries starts out focusing primarily on vampire lore and the budding love triangle between two vampire brothers, Damon and Stefan Salvatore, and a human, Elena Gilbert. However, it soon evolves to include werewolf mythology where it’s revealed that some families, like the Lockwoods, are born with the gene and trigger it when they kill for the first time, whether accidental or not. It’s even possible for a vampire and werewolf hybrid to come into power! 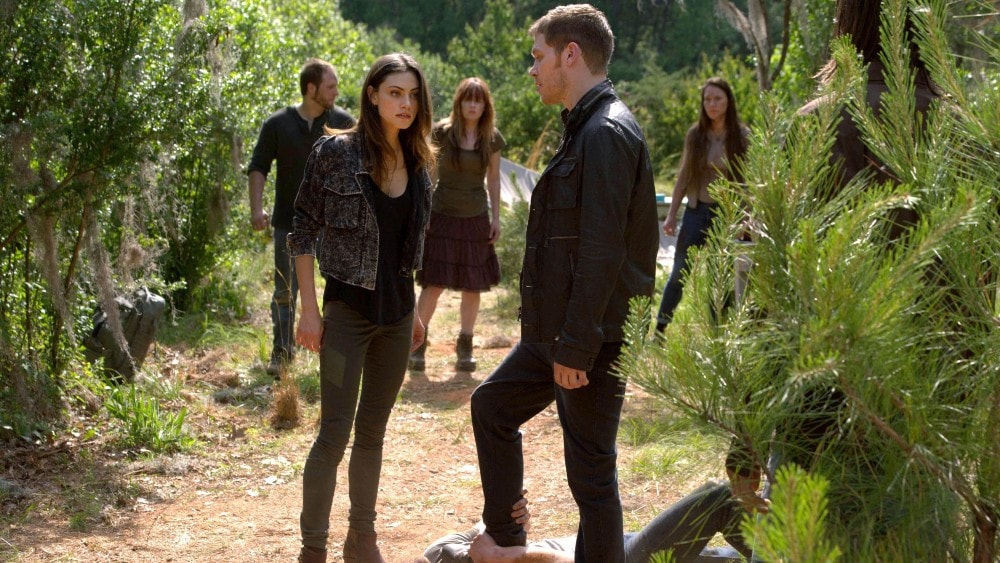 The Originals was the first spin-off from the preceding show on our list, thus setting off the franchise’s expansion. Departing from the teen drama setting of Mystic Falls, The Originals follows the political turmoil between supernatural creatures in the French Quarter of New Orleans.

“The Originals” is the name given to the very first family of vampires in existence: the Mikaelsons. When they first show up (and high key wreak havoc) in Mystic Falls, it’s revealed that Klaus, middle child but de facto head of the Original family, is actually a kind of vampire-witch-werewolf hybrid. The backdoor pilot of The Originals revealed that Klaus’ werewolf side allowed him to impregnate fellow werewolf Hayley, who he finds again after he and his siblings return to New Orleans to attempt to reclaim the city. 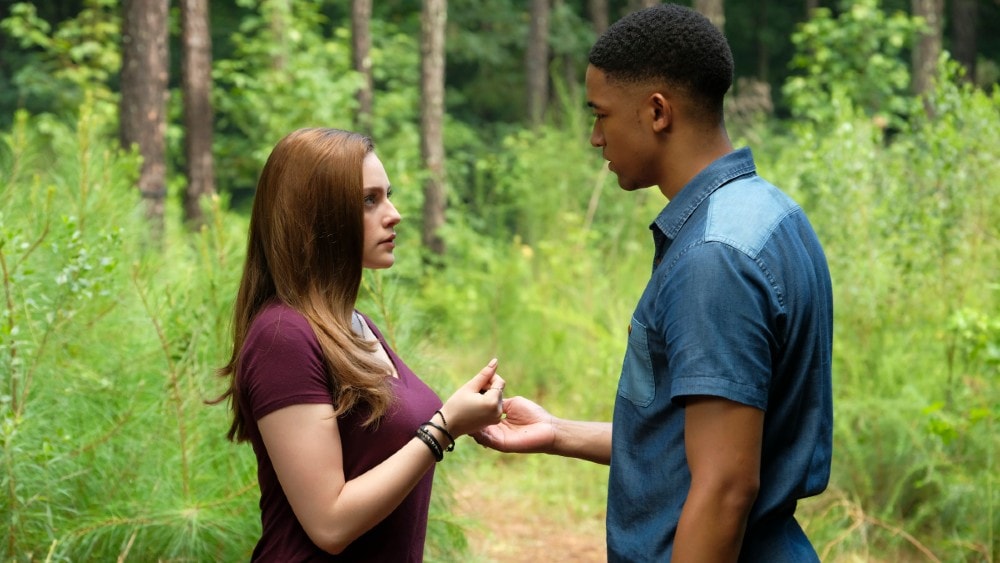 The third series now in the parent The Vampire Diaries franchise and a direct spin-off of The Originals, Legacies picks up two years after the events in its preceding series. True to its title, it follows the next generation of supernaturals as they continue the legacy their parents left to them – not to mention that it’s primarily set in the Salvatore brothers’ legacy: the Salvatore School for the Young and Gifted.

Hybrid Klaus Mikaelson and werewolf Hayley Marshall welcomed a child into the supernatural world in The Originals and made sure to keep her protected from threats to their family. By the time Legacies premiered, their daughter Hope is 17 years old and ready to grow into the powers she was born with. After all, she’s a direct descendant of a powerful witch, vampire, and werewolf bloodlines.

She-Wolf of London had its first run under syndication in the USA and aired for just one season with 20 one-hour episodes – still plenty enough for a few days’ worth of binge-watching! Strangely, the last six episodes of the season were aired under the title Love and Curses, a change that was brought about by a move in production location (i.e. London to LA).

The show follows an American grad student, Randi Wallace, as she moves to London to study mythology under the tutelage of Professor Ian Matheson. During a night out on the moors, Randi is attacked by a werewolf and after she survives, she’s determined to find a cure for her lycanthropy. Matheson uses his expertise to help her investigate other supernatural phenomena and take care of her during her transformations, leading to a romantic relationship to develop between them as well. 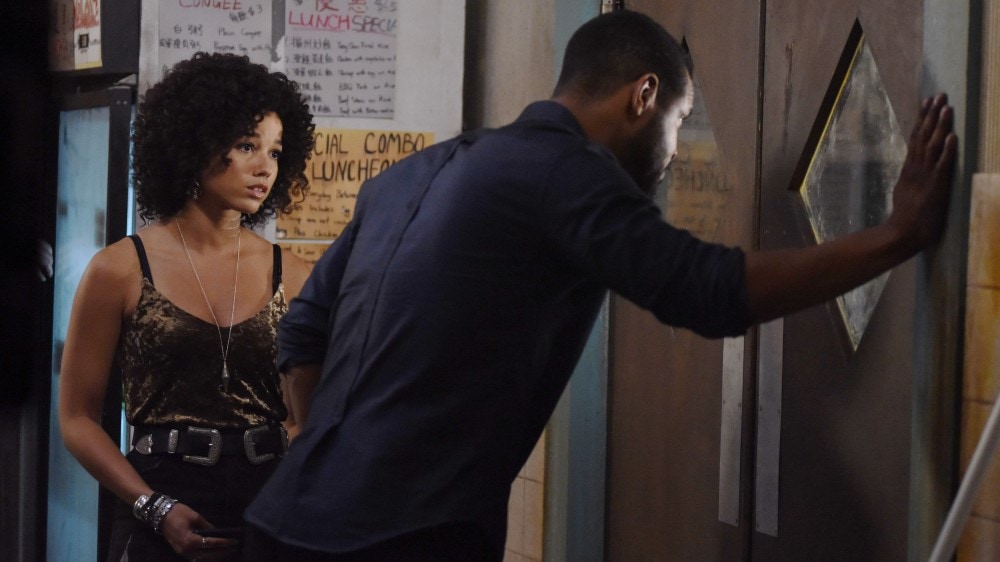 Shadowhunters was also based on a series of books, titled The Mortal Instruments by Cassandra Clare. Though it was first adapted into a movie, there was no sequel, and fans were left to wonder what the future held for the main characters, Clary and Jace. Thankfully, the series adaptation continued the story for us.

Shadowhunters are half-angels who are tasked with protecting the world of humans – what they call ‘mundanes’ – from the demons. The other supernatural creatures make up the ‘Downworld’, which includes fair folk, warlocks, vampires, and werewolves. The werewolves are under the leadership of their alpha Luke Garroway, who also conveniently happens to be an NYPD cop. Though previously unheard of and thought to be highly unlikely, the Shadowhunters and some members of the Downworld work together to keep the mundanes safe. 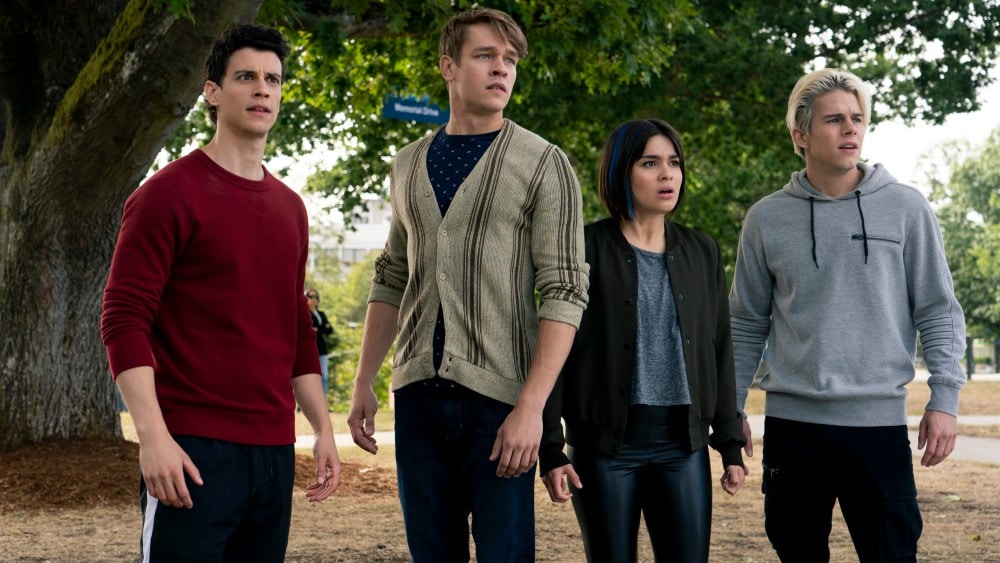 Netflix joins the shows about werewolves party with an original series that just aired its second season this past June 2020. Set against the backdrop of a prestigious university campus, The Order is an interesting show in that unlike many others of the fantasy genre, it has so far left out anything to do with vampire mythology (Teen Wolf does that, too).

Jack Morton is a freshman at Belgrave University, but he isn’t there to just study. He’s seeking answers to the mystery surrounding his mother’s death and that involves getting close to his estranged father, who also happens to be the leader of The Hermetic Order of the Blue Rose, a secret society of magic practitioners based out of Belgrave. As Jack becomes more involved with the organization, he finds that they are at war with The Knights of Saint Christopher, yet another secret society – this time, of werewolves. 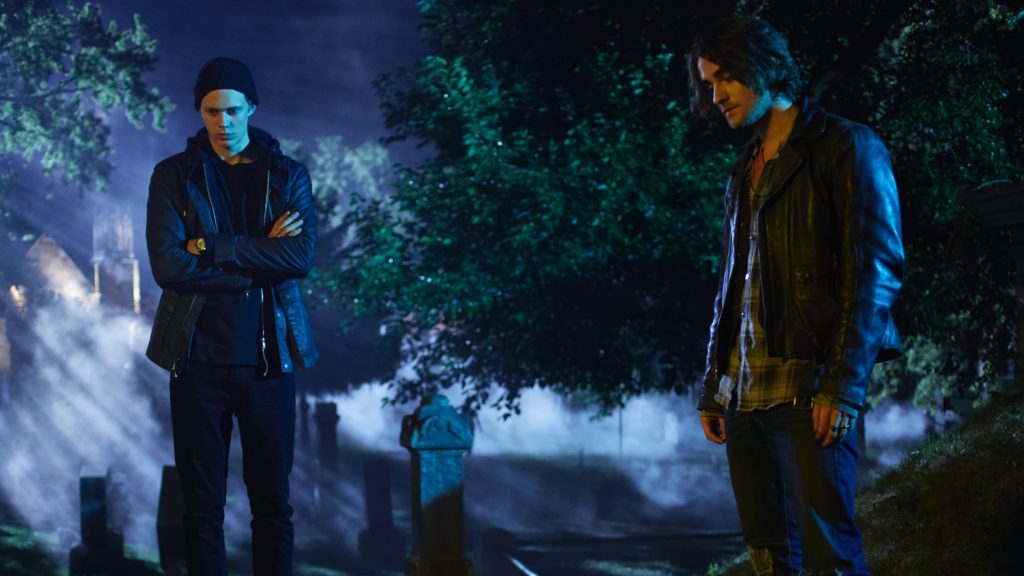 The Netflix team made quick work producing a series adaptation of Hemlock Grove, which had its origins in a novel of the same name written by Brian McGreevy. McGreevy himself developed and wrote the series, serving as producer alongside a household name in the horror genre: Eli Roth.

Hemlock Grove is a fictional town in Pennsylvania where its residents live on opposing ends of the social class spectrum: either in extreme poverty or extreme wealth. When two young girls are brutally killed and unceremoniously dumped, a young Romani boy named Peter Rumancek is instantly cast as a suspect on top of being rumored to be a werewolf. He is, of course, but he’s determined to at least clear his name of the murders and gets some unexpected help from the heir of one of the town’s most prominent families. 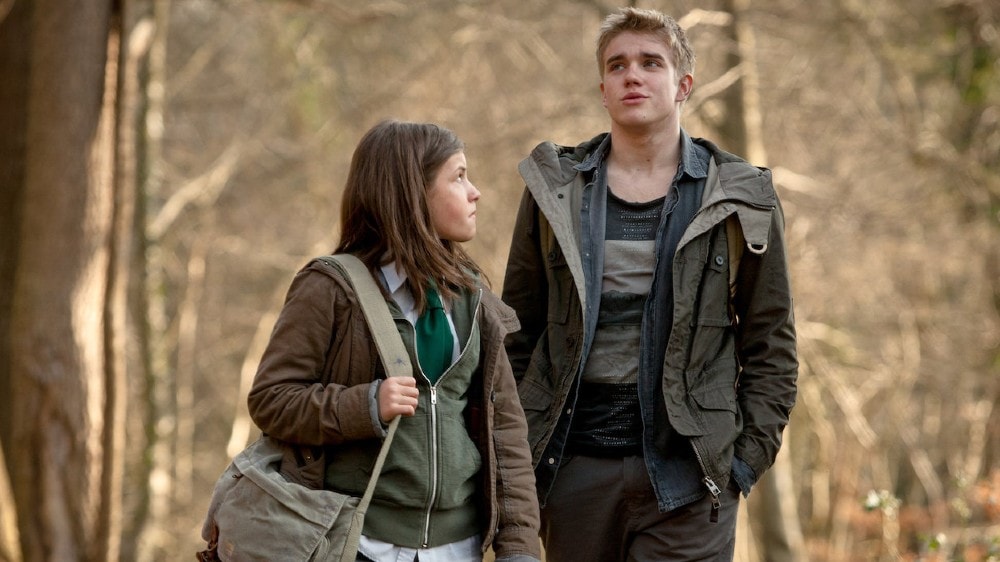 While CBBC’s Wolfblood is technically categorized as a teen drama, the show’s target audience is really more geared towards the younger end of that age group. What sets Wolfblood apart is that in between each of its regular seasons, supplementary webisodes (some in the form of animated motion comics) are also released to provide background or context for characters and to further expand the existing storylines.

The werewolf mythology used here is more or less what we’re familiar with: they’re shapeshifters who live as humans and can transform into wolves at will, though the full moon compels them to change with no control. These creatures, called wolfbloods, struggle to hide their secret every day.

The next few shows on our list are going to be quite a trip to the past, so buckle up! If you’ve ever wondered how (and if!) TV shows from decades ago were able to achieve the supernatural effects that are so seamlessly done now, then these shows are for you.

So not a lot of people know this but before Paul Wesley was the charming vampire Stefan Salvatore in The Vampire Diaries, he played the bad boy werewolf Luke Cates in CBS’ short-lived werewolf series, Wolf Lake. Granted, he was much younger and was credited under his original Polish surname Wasilewski.

When you live in a place called Wolf Lake, you’d expect there to be stories about packs of (regular) wolves roaming the surrounding areas. In this Seattle suburb, however, it’s the werewolves that its human inhabitants are keeping an eye on. When a Seattle policeman turns up in Wolf Lake looking for answers to his fiancee’s murder, the suspicion immediately falls on the pack of werewolves living on the “Hill” away from the regular humans.

You’d think that a town called Pleasantville would be full of all things, well, pleasant, but that’s not exactly the case in Big Wolf on Campus. In fact, Pleasantville soon finds itself hosting a whole slew of supernatural beings: vampires, zombies, ghosts, and of course, werewolves.

The show’s protagonist is Tommy Dawkins, an incoming high school senior and the son of the mayor. While on a camping trip, Tommy is attacked by a werewolf and soon becomes one himself. His best friend discovers his secret and together, they fight the other supernatural creatures that come to their town – as well as the Pleasantville residents who believe that the ‘Pleasantville Werewolf’ is just as dangerous as the monsters he is protecting them from.