Understandably, most of us are probably more familiar with the events in World War 2 than we are with World War 1.

The crimes against humanity committed in WW2 were on an enormous scale, and there are some alive today who are still experiencing the effects of his war.

That doesn’t make the atrocities of WW1 any less devastating, though. In fact, WW1 brought on the greatest loss of life of any war up until then, with casualties comprised of both soldiers and civilians.

Of course, films and TV shows about the First World War wouldn’t even begin to come close to showing the realities of the war, especially not with so many fictional elements probably thrown into the mix.

However, hopefully, these TV shows about WW1 will at least provide us with an idea of what life was like and, more importantly, what happened.

So, here are the best TV shows about World War 1! 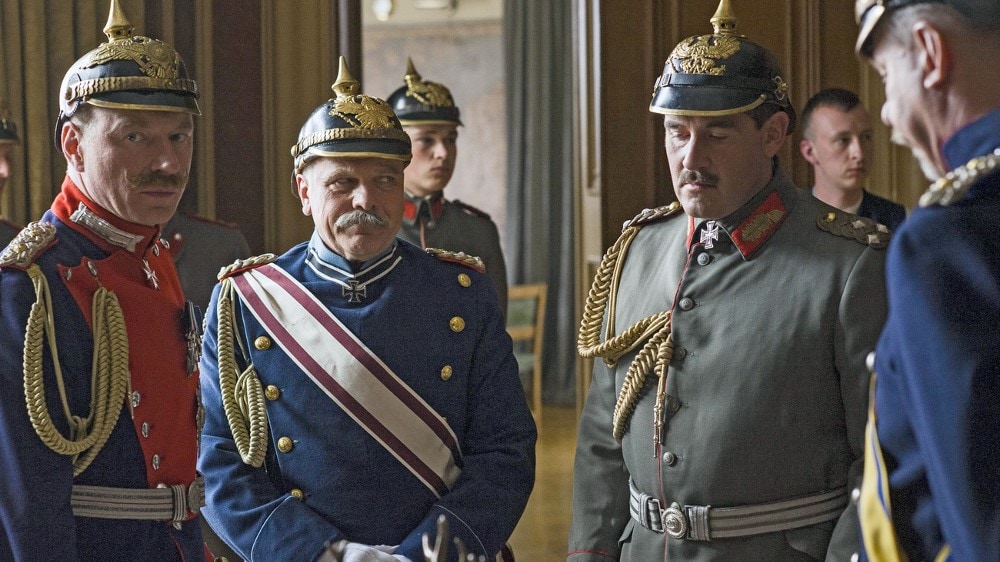 We’re starting off our list with the BBC Two miniseries 37 Days, which aired over just 3 episodes.

The title is no arbitrary number, though few will immediately recognize it.

Actually, 37 days is the duration of time between the assassination of Austria’s Archduke Franz Ferdinand and the United Kingdom officially declaring war on Germany: June 28 to August 4, 1914.

These two events are what sparked the beginning of the first World War.

Thus, 37 Days chronicles what transpired in these five weeks and how one event snowballed into the next, resulting in one of the most devastating wars to date. 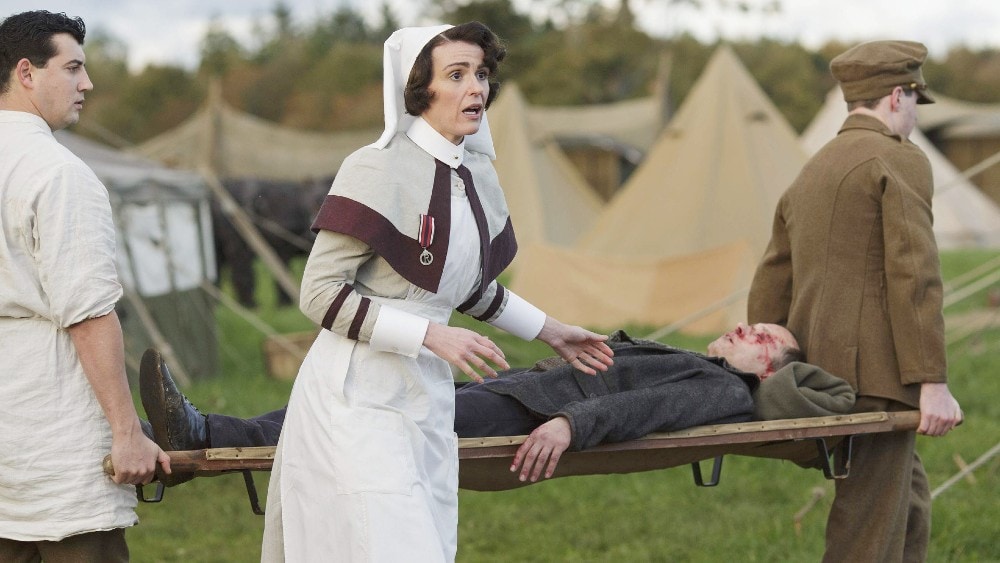 In every war there are many groups caught up in the middle: the soldiers, civilians, and governments.

Among those are the medical workers who sadly also get a front-row seat to the brutal realities of war.

The lives of these doctors, nurses, and volunteers are depicted in BBC One’s drama series The Crimson Field, which takes place at a fictional field hospital in France during WW1.

Despite the dangers of war even from those who view the medical professionals as a threat, these volunteers strive to use their training – however underprepared they feel – to heal the bodies and souls of the wounded soldiers. 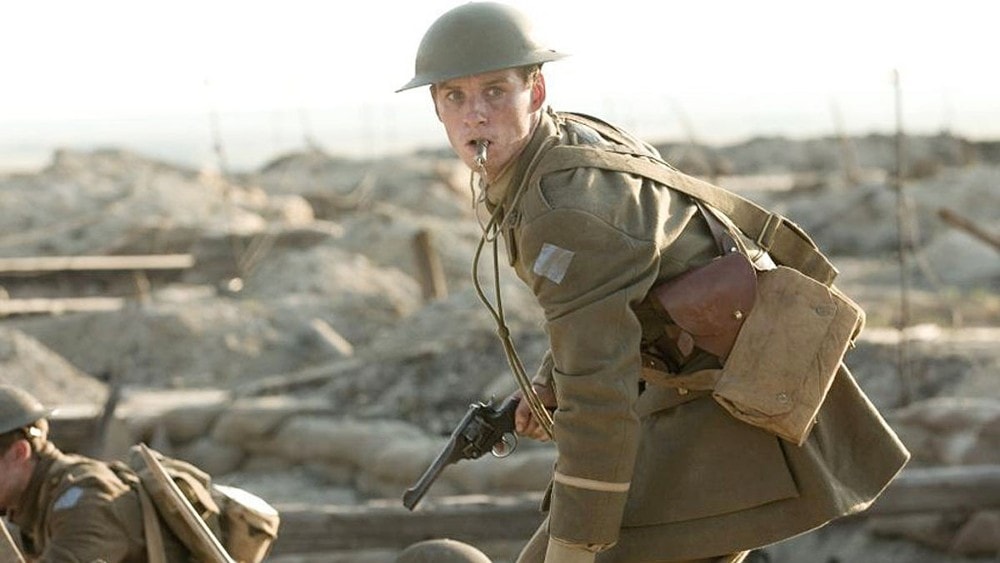 Birdsong is a two-part serial adapted from Sebastian Faulks’ 1993 war novel of the same name, though it differs from the novel in many respects.

The series unfolds from the perspective of Stephen Wraysford, a soldier who had fallen in love with a married woman named Isabelle before the war.

The affair ends abruptly but the two meet again by chance just before Stephen goes into the Battle of the Somme.

Stephen’s flashbacks tell their love story mixed in with his memories of the war, weaving a complicated story of love, hope, and survival. 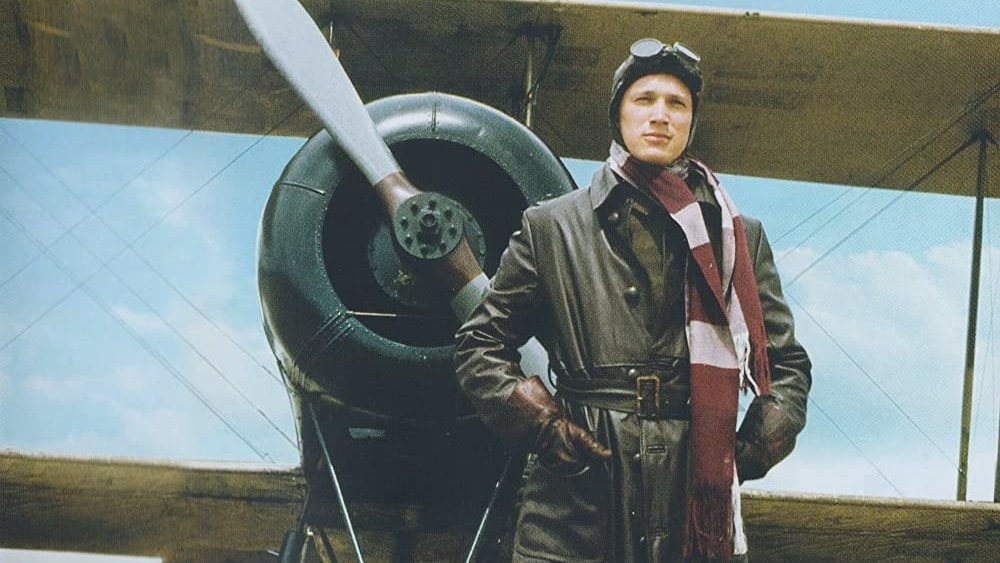 The British drama Wings focuses on yet another group on the frontlines of the war: the Royal Flying Corps, which was the air force arm of the British army during the First World War.

The series is recognized for its historical accuracy, depicting a country and a society that was “on the brink of change” and yet still so focused on the prevalent class divisions.

The underlying premise is the struggle the British pilots experience with their airplanes – which are still subpar compared to those of the Germans, thus reflecting the accuracy of British aircraft and warfare. 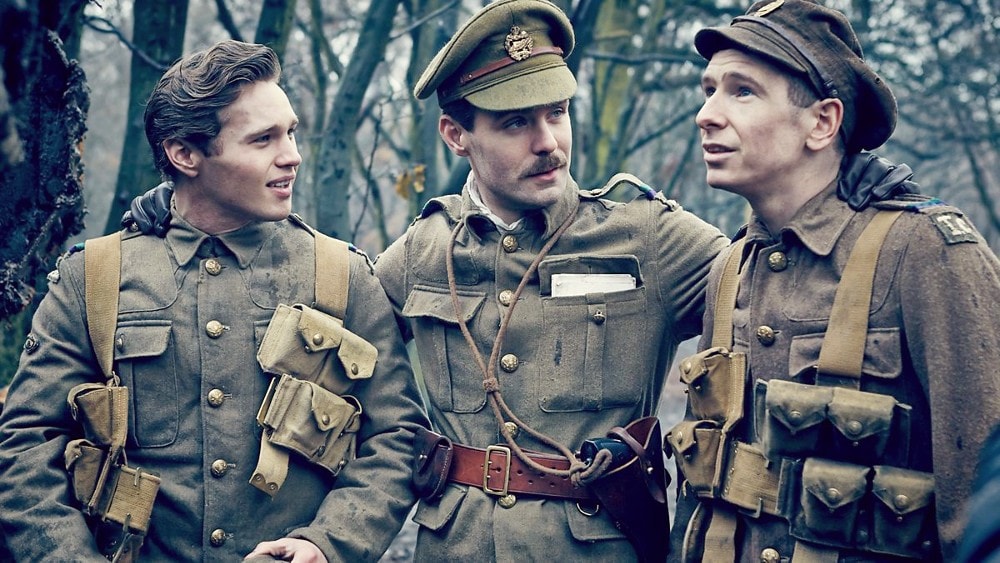 There’s a reason so many of these shows about World War 1 premiered in 2014 – this year marked the 100th anniversary of the start of the war and BBC Three’s miniseries Our World War was released to commemorate this anniversary.

Though it was only three episodes long, the series told a compelling story in each one, based on the real experiences of the soldiers who served.

Each episode featured different stories and perspectives across different battles, like the Battle of the Somme and the Battle of Amiens, highlighting the battalions that took part and how it affected their lives. 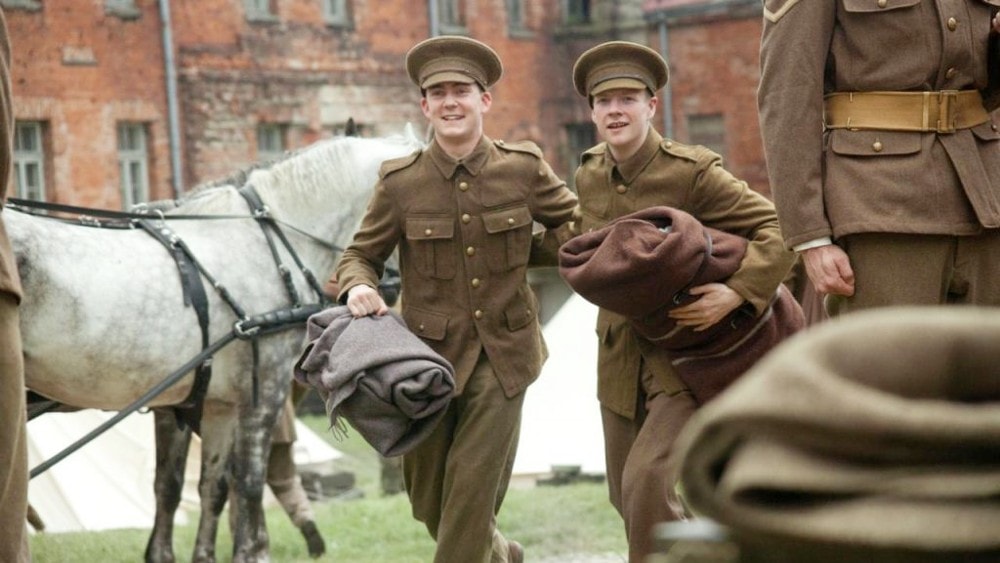 Nobody enlists to join the war efforts expecting it to last just a short while, but everybody hopes it will.

In the British-Polish historical drama series The Passing Bells, however, two teenagers sign up as soldiers with that very expectation.

Tommy Edwards is from England and Michael Lang is from Germany, enlist with the thought that they’ll only be in battle for a few months, but the series shows the toll it begins to take on them, their comrades, and their families when the war goes on longer than they expected.

Though the series plays out from their different viewpoints, the two boys cross paths at multiple points throughout the war. 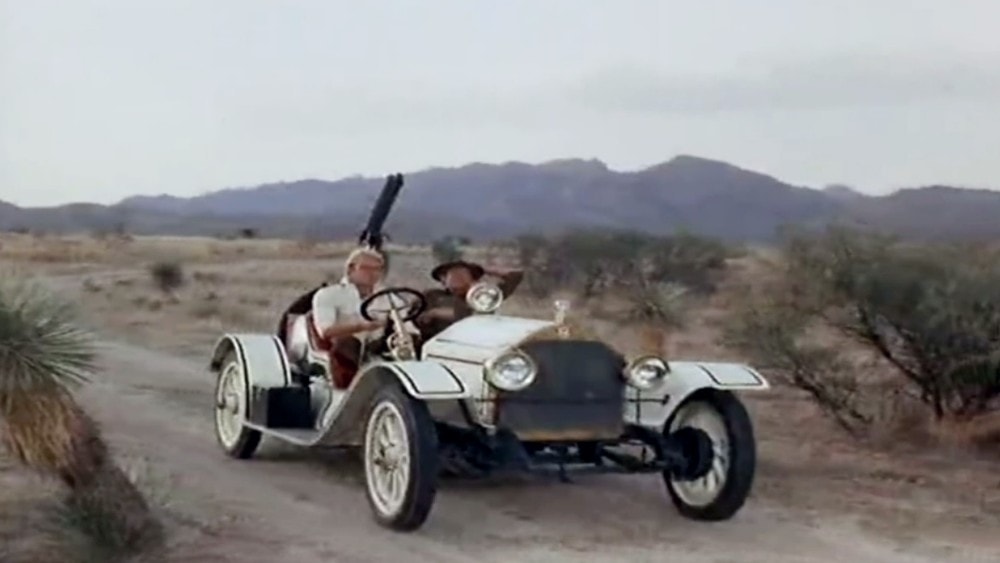 While the American series Bearcats! is set around when the first World War was about to begin in 1914, the series leans more towards the Western genre and has more of a secondary focus on the war itself, as it was primarily set before America took part in the war as well.

It follows Hank Brackett and Johnny Reach, two heroes and ‘troubleshooters’ who were called upon by rich clientele to take on difficult jobs. 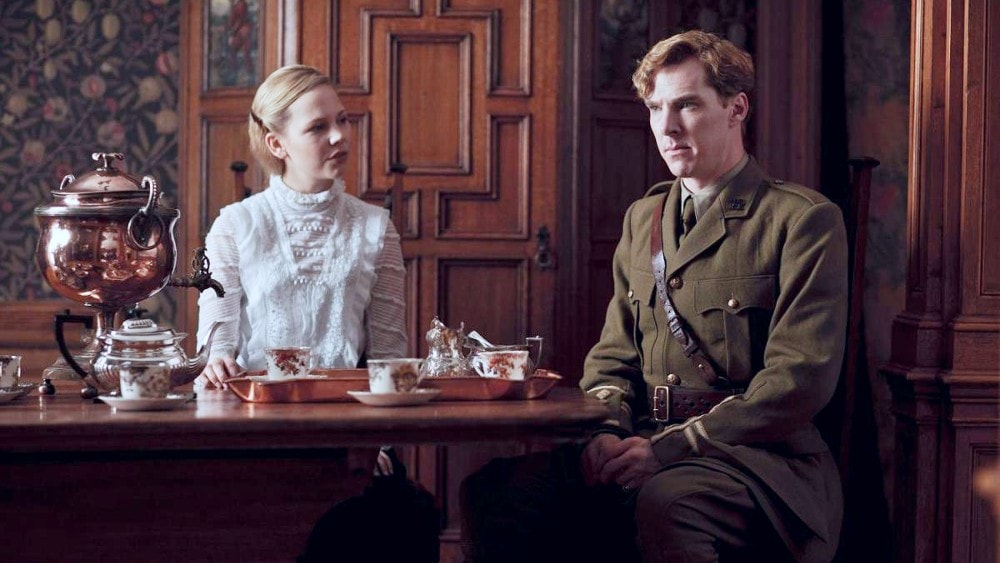 Parade’s End is a five-part period drama adapted from the four-part series of novels of the same name, written by Ford Maddox Ford between 1924 and 1928.

Like the preceding show, Parade’s End takes place primarily in the years leading up to the dawn of the war.

Three figures are at the center, a man and two women, all of whom have conflicting ideals and are entangled in a complicated relationship.

As the war looms ever closer, their dynamics change even further and extend to their elite inner circle. 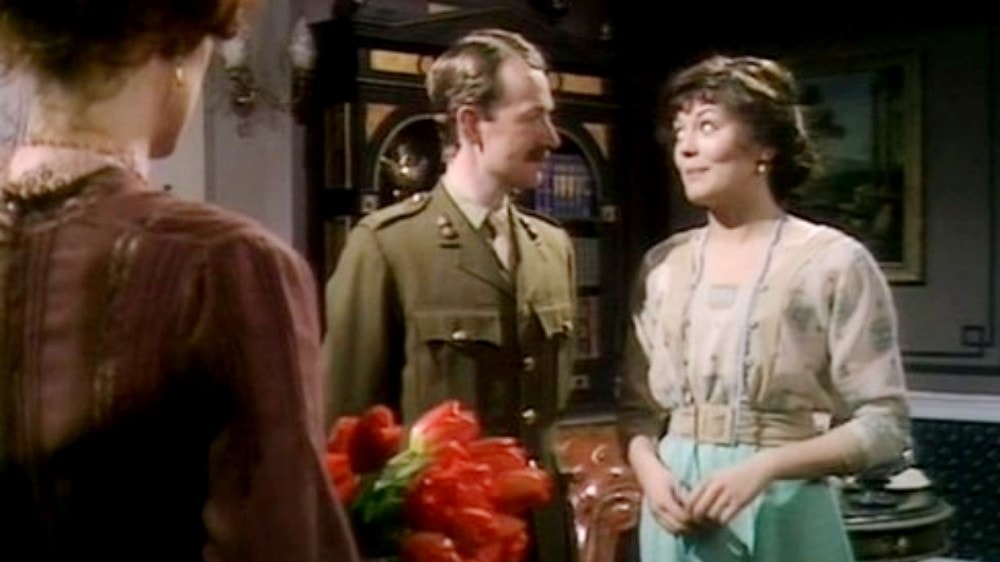 The title of this series is an accurate reflection of the class divide that was so prevalent in British society in those days.

Upstairs, Downstairs is set in Belgravia, an affluent district in central London – more specifically in 165 Eaton Place, an equally affluent townhouse. It showcases the lives of the Bellamy family (the family “upstairs”) and their househelp (who live in the house’s “downstairs”).

While the series spans across three decades and ends right at the start of the Great Depression of the 1930s, it’s season 4 that is set against the backdrop of WW1, from 1914 to 1918. 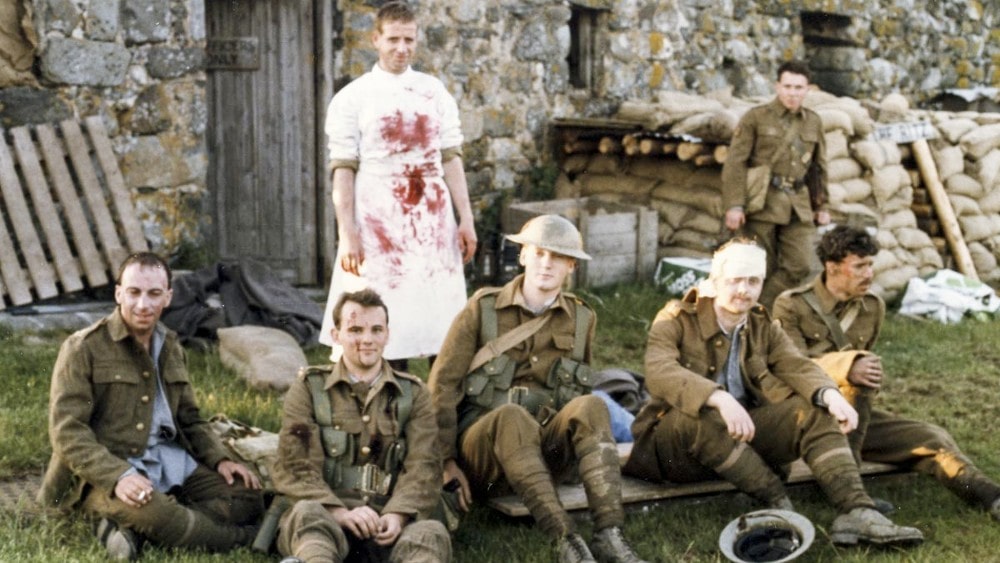 The Étaples mutiny that occurred in 1917 is probably one of the lesser talked about events during World War 1.

However, it’s now something we can learn a little bit more about through the dramatized version of events laid out in this four-part miniseries, The Monocled Mutineer – where the titular character is known as deserter and imposter, Percy Toplis.

Étaples was intended to be a transit camp for troops to rest, but the reality was much different; it was being used for rigid training that soon negatively affected the troops that passed through.

The series chronicles Toplis’ life during these events and his role in the mutiny.

Downton Abbey is an absolute classic in the British historical drama genre, with many accolades to its name and even two films – one of which is coming very soon!

The title of the series is a reference to its primary setting: a fictional estate in Yorkshire that is home to the wealthy and aristocratic Crawley family, which the show centers on.

It begins in 1912 and ends in 1926, and shows how the family navigated the tumultuous events of these years.

The show’s second season covers WWI and the effects it had on the Crawleys. 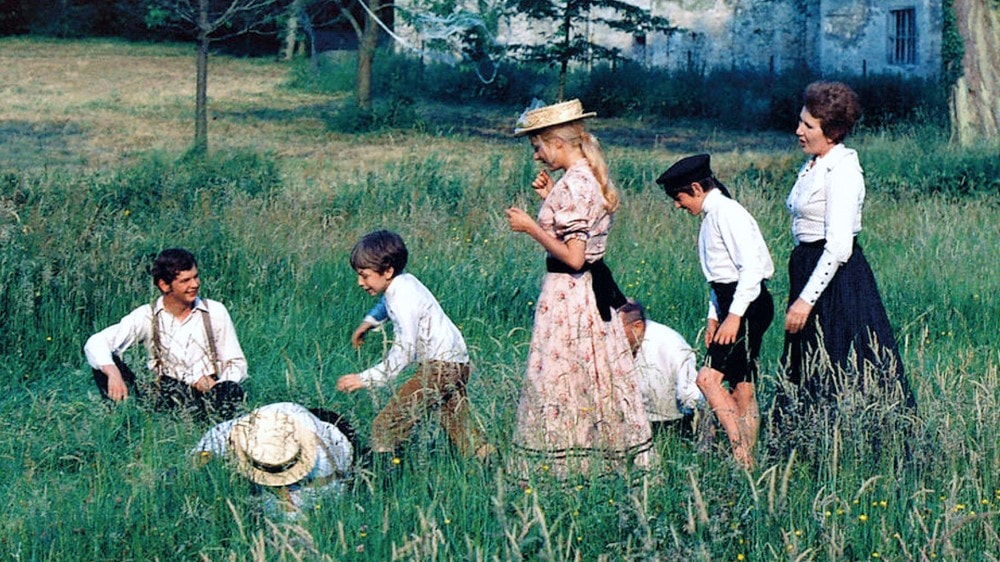 Translated into English as The House in the Woods, the 1971 French miniseries La maison des bois takes place in a French village in the countryside during the first World War.

It centers on a man who takes in refugee children who have been affected and left without parents because of the conflict.

It focuses specifically on three young refugee children, along with the real children of the estate’s gamekeeper, who share home, school, and news of the ongoing war.

The series is a beautiful but sad look into how WW1 affected the most innocent: children. 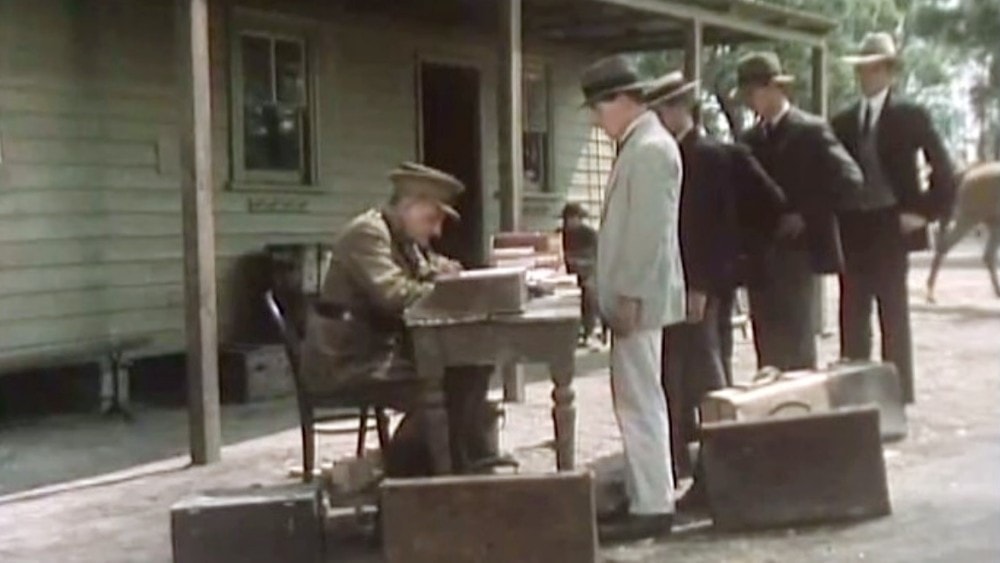 Though seemingly too short of a miniseries with just seven episodes.

1915 brings yet another perspective of the war to the list: from the youth of Australia, who was part of the Allied forces during the war.

It starts with a look into the Gilchrist family and in particular, their son Walter.

When the war encroaches on their country and lives, Walter and his best friend Billie enlist to help on the European front, but their patriotism didn’t prepare them for the horrors of war that were waiting for them. 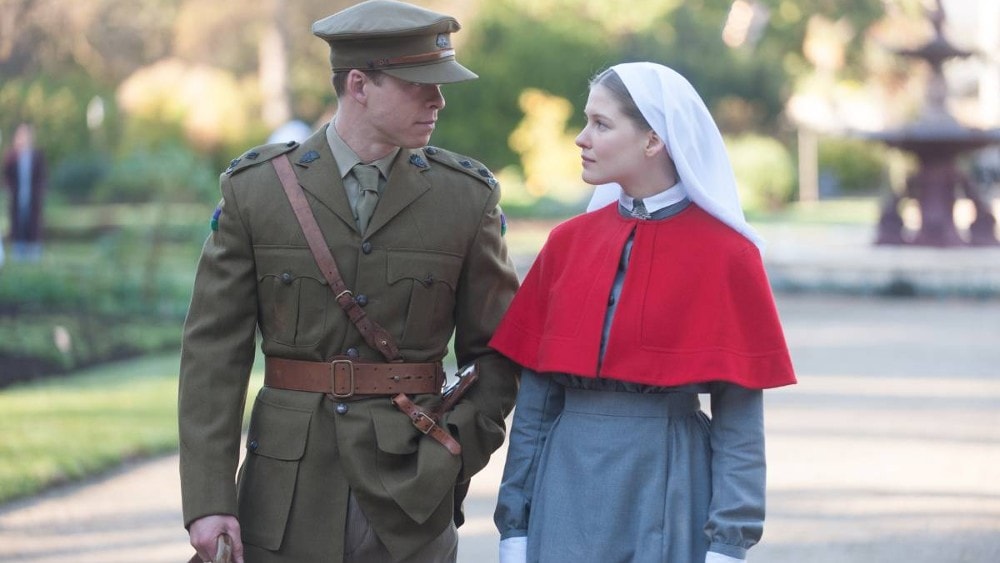 Sticking to the Allies down under, ANZAC Girls is based on real-life documents, letters, diaries, and the book The Other ANZACs by Peter Rees.

The six-part miniseries tells the often untold stories of those who are also in the front row to the horrors of war: the nurses at the Australian Army Nursing Service.

The medical profession is tough enough on any normal day, but it’s almost unimaginable when on the battlefield.

The series shows how these women persevered through the brutality and pain they witnessed in healing the soldiers, ensuring they provided the best care possible. 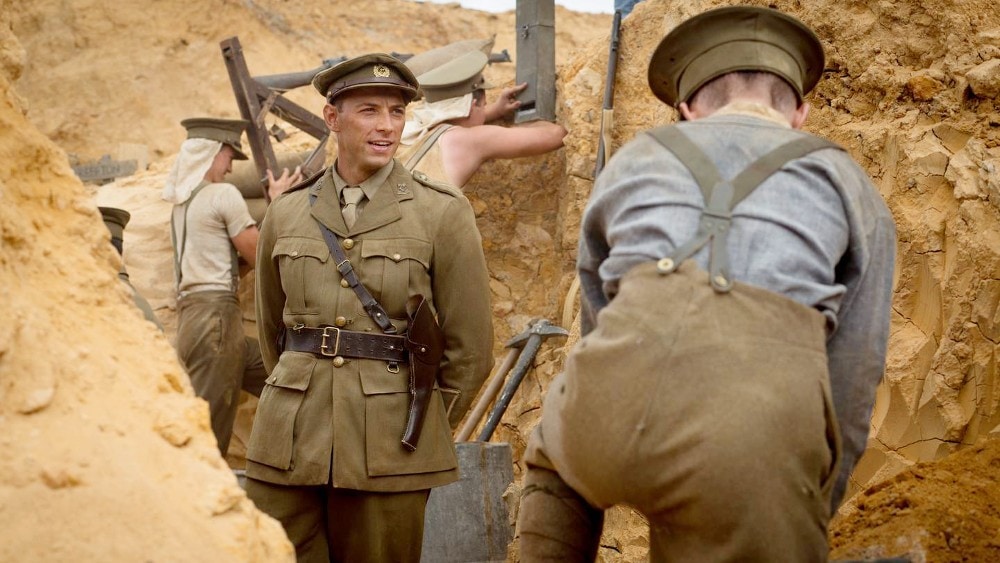 Next, we quickly jump to New Zealand with TV One’s WW1 drama When We Go to War.

The miniseries shows the impact the war had on New Zealanders by following a Maori brother and sister and a Pakeha family during the First World War.

Over the six episodes of When We Go to War, we see both life at home and in the New Zealand Expeditionary Force during the Gallipoli Campaign and in Egypt. 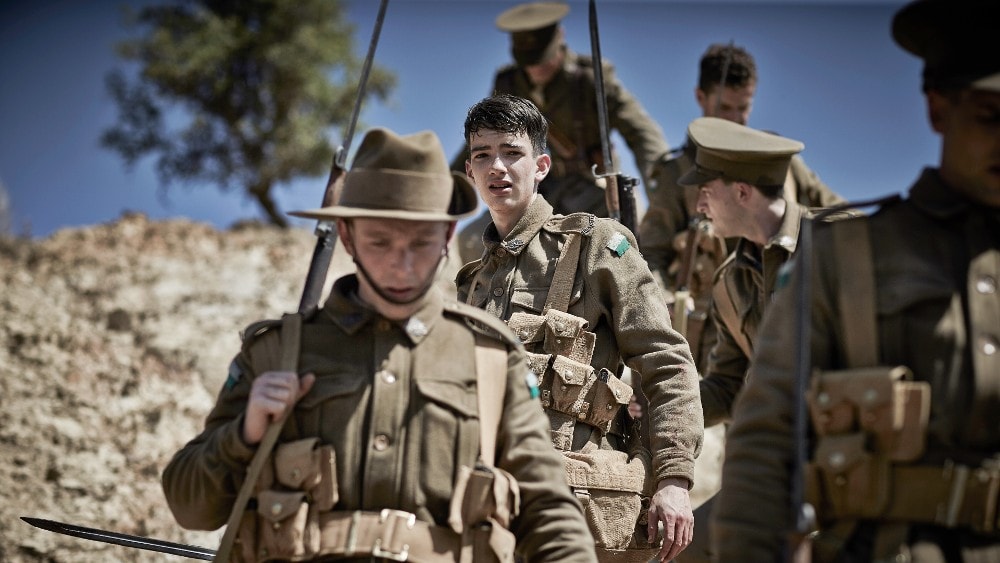 The Gallipoli Campaign has become an integral part of the shared history between Australia and New Zealand and is known to be what sparked the countries’ nationalism.

The seven-part Australian miniseries Gallipoli tells the story of Tolly Johnson, a soldier who risked his life to serve his country.

17-year-old Tolly had lied about his age so that he could enlist, but his experiences during the 10-month campaign on the Gallipoli peninsula was unlike anything he ever expected, and the series highlights both the battle and the aftermath.

Though this story is fictionalized, it reflects the experiences of many soldiers who would do anything for their country and countrymen. 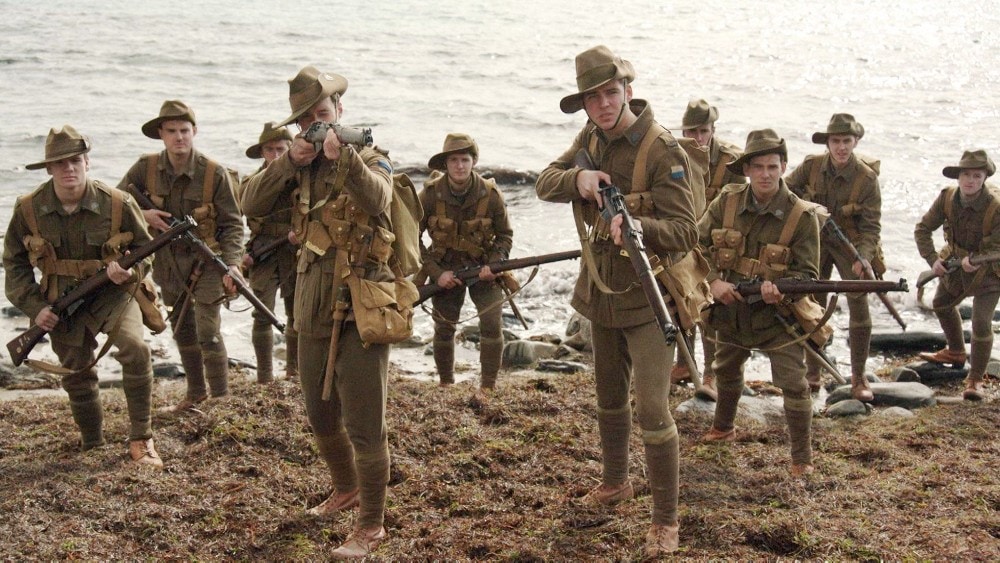 Deadline Gallipoli brings yet another perspective to viewers, and it’s definitely one that we’re never fully aware even exists during a time of war.

This is the perspective of the journalists and war correspondents, who risk their lives in a different way from the other frontliners.

In this Australian two-part series, we follow real-life figures Ellis Ashmead-Bartlett, Charles Bean, Phillip Schuler, and Keith Murdoch as they arrive in Gallipoli in 1915.

Their work turns a loss into a great story of heroism as they refuse to let the truth become yet another casualty of war. 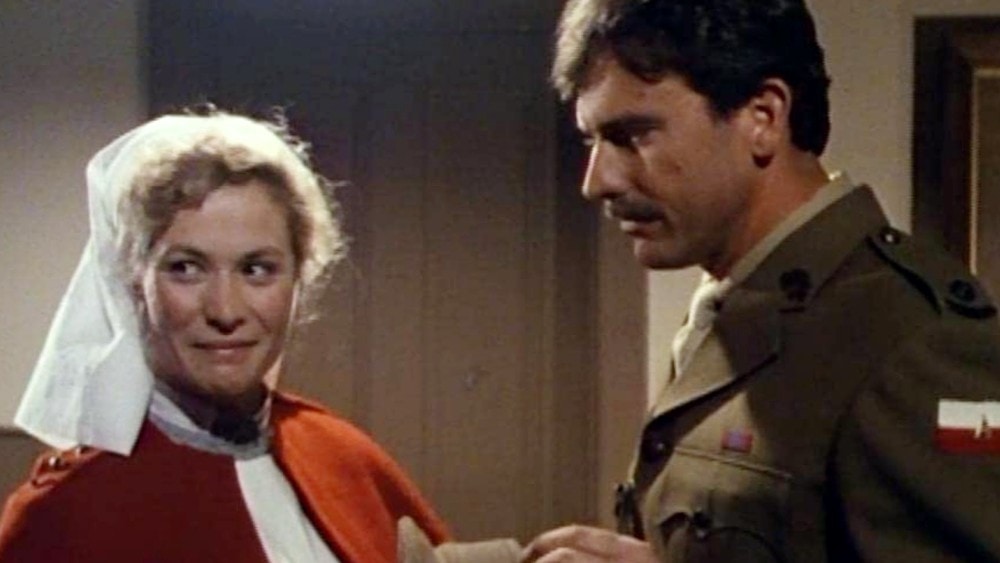 We’ve mentioned the name before but in case you’re still unsure, ANZAC is the Australia and New Zealand Army Corps and Anzacs is the name for all of its volunteer members.

Given this, the five-part miniseries Anzacs centers on a group of about a dozen Australian soldiers in the 8th Battalion as they face the war from 1915 through to the end.

After Gallipoli, they traveled to the Western Front to help in other battles until victory came.

With a group so young, the series deals with themes like the loss of innocence, their coming of age and rise of their nationalism, and the friendships formed for a lifetime. 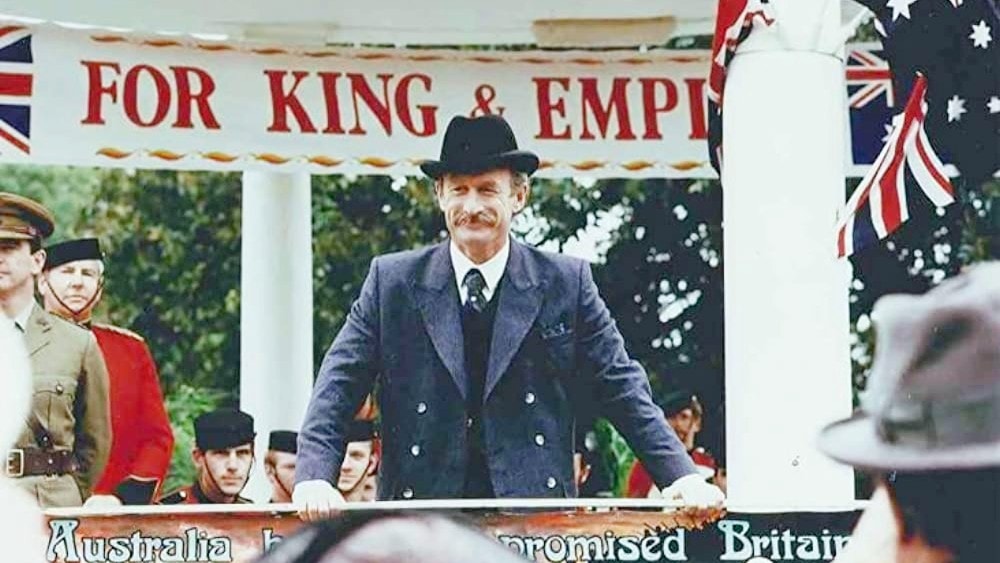 Whereas we often see novels being adapted into a series, with The Alien Years it’s the other way around; the three-part miniseries was later developed into a novel of the same name.

It begins right before the onset of the war – Elizabeth Paterson, the daughter of a high-ranking official in the Australian government, falls in love with and marries German national, Stefan.

The happy couple is ready to start their life at a vineyard in South Australia, but the declaration of war upends their plans, especially because all Germans living in Australia have been ordered to be imprisoned.