Ah, the Roaring Twenties – a period in American history that completely redefined their pop culture as the country recovered from the First World War and broke out of the traditional restraints that society had in place.

There were changes in music as jazz swept the nation, fashion as women adopted the “flapper” style with shorter hemlines and short hair, and dancing. Speakeasies were popping up as a way to defy the Prohibition, and consumerism was at an all-time high.

Similar changes were happening across the rest of the world as well, with women gaining more freedom in terms of fashion and their careers.

Of course, it wasn’t all well and good. Speakeasies were, after all, conducting illegal business through the sale of alcohol. But because this period was also defined by a “decline in moral values”, the illegal production and sale of alcohol became a lucrative business that led to an increase in organized crime.

On top of that, while certain American government policies led to an increase in economic prosperity, it also eventually led to the stock market crash and the Great Depression at the end of the 1920s and early 1930s – a crash that affected not only America but many other countries around the world.

While it’s hard to say whether the Roaring Twenties was a good or bad point in history, it’s safe to say that we were hoping for a good Twenties this decade and well, we all know how that’s turning out.

Instead of dwelling on the present, however, we want to throw it back a century and see what life may have been like back then – through our TV screens, of course. 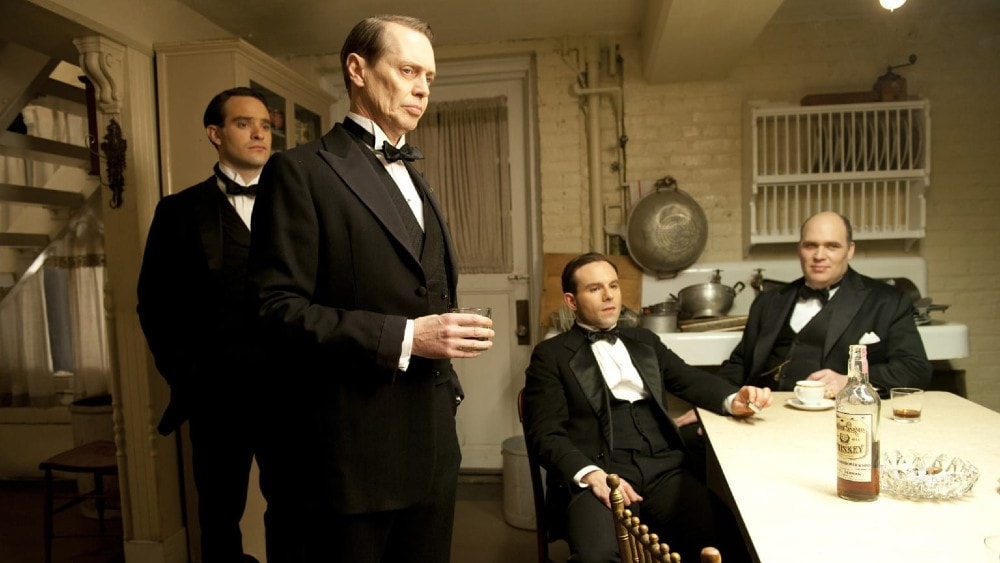 We’re kicking it off with a look into the world of organized crime at the dawn of the Prohibition in Atlantic City, New Jersey.

There’s one man who rules the city and controls almost everything that happens there: Enock “Nucky” Thompson (based on the historical figure Enoch L. Johnson). He’s the city’s treasurer and a powerful – albeit corrupt – politician with strong personal and professional ties to government agencies, fellow politicians, and even those on the wrong side of the law.

Because of his ostentatious lifestyle unbefitting for a man in office, not to mention the proliferation of illegal activities within the city, the FBI begins to take an interest in Nucky and investigates his possible ties within the local mobs. 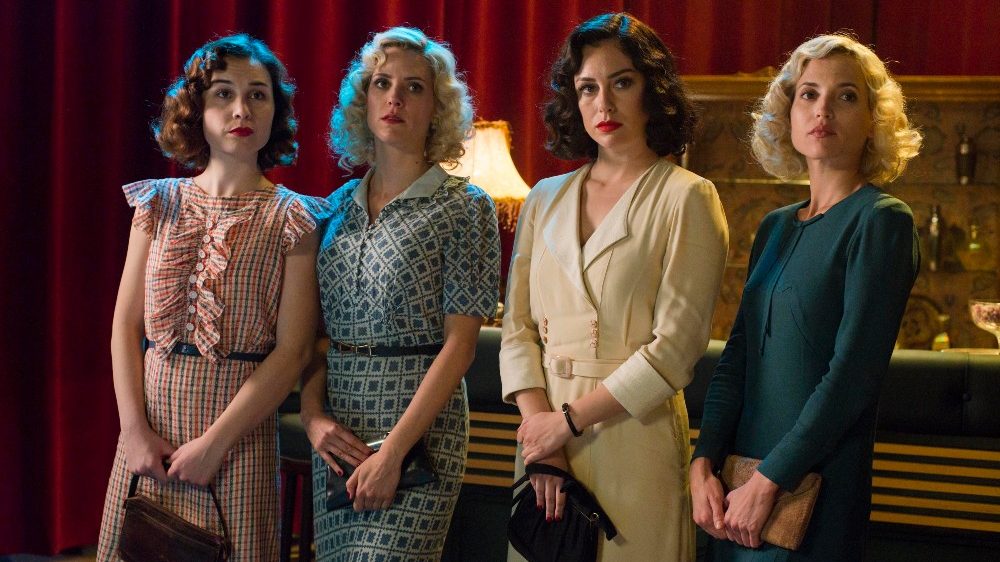 Cable Girls was Netflix’s first Spanish original and focuses on a group of working women in Madrid during the late 1920s.

Consistent with the rise of technology and the increased consumerism around the world, a new telecommunications company has opened up in Madrid, Spain that offers work to women with “decent pay and some independence”.

The four women at the center of the show – Lidia, Angeles, Carlota, and Marga – seek employment there for various reasons, from starting life anew to providing for her family and even escaping the strict constraints of life in high society.

Despite their independence, they must still deal with the prejudices against working women in their industry and the women find solace and support in navigating these personal and professional hurdles. 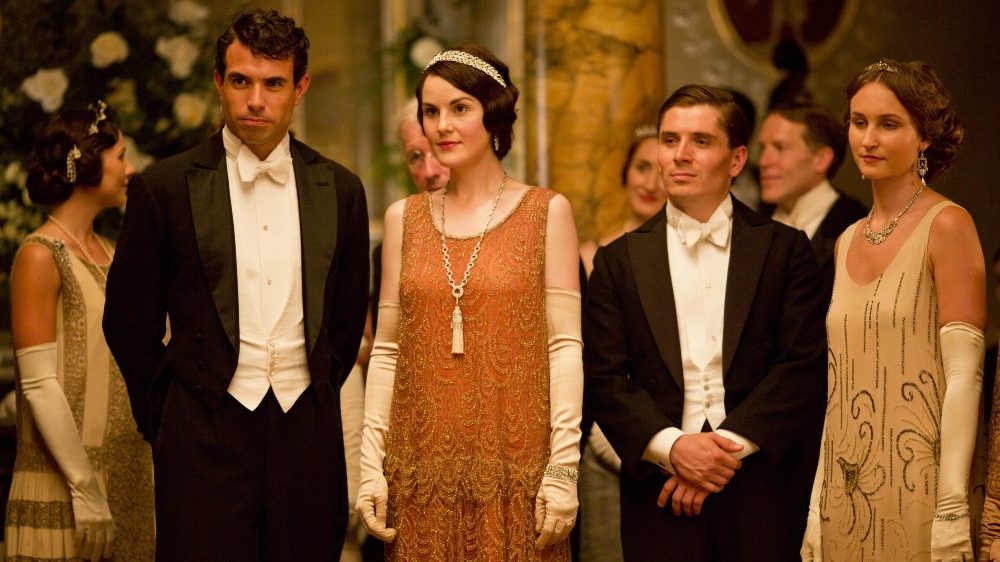 Popular historical drama Downton Abbey takes us to the titular, fictional country estate in Yorkshire, England where the Crawleys live a life of privilege with their domestic servants.

The series begins in the early 1910s with the sinking of the RMS Titanic and the central issue being who will inherit the Downton Abbey estate as the current heir presumptive died in the accident.

Moving forward, season 3 begins in the decade in question and continues the narrative of the complex and intertwined relationships and social structure of the time.

The succeeding seasons – including the accompanying 2019 film – document how the family navigates the key historical events such as the Irish War of Independence, the decline of the aristocracy, and even the royal visits. 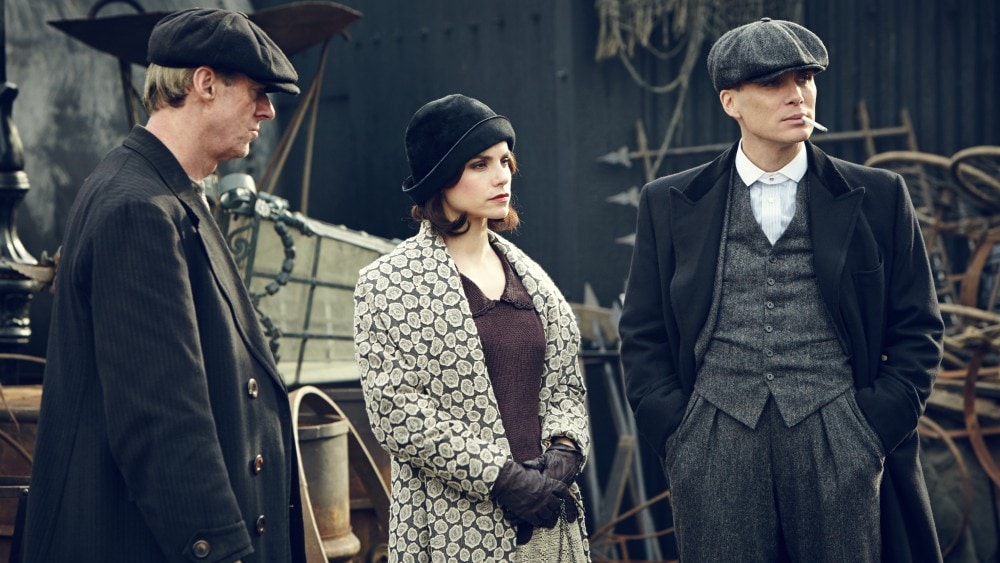 It wasn’t just America that was experiencing a rise in organized crime following World War I. In Birmingham, England, a street gang called Peaky Blinders was slowly gaining control over the city and its illegal activities.

It’s from this gang that the BBC series takes its period crime drama title, and this historical gang also serves as the inspiration for the crime family at the center of the show.

Peaky Blinders follows the Shelby family and their criminal exploits across Birmingham, under the leadership of the head honcho Tommy Shelby.

The 1920s begins in the second season where the Shelbys expand their empire into the neighboring cities and eventually, internationally as well. Though the characters are largely fictional, many plotlines in the show borrow from real-life historical events. 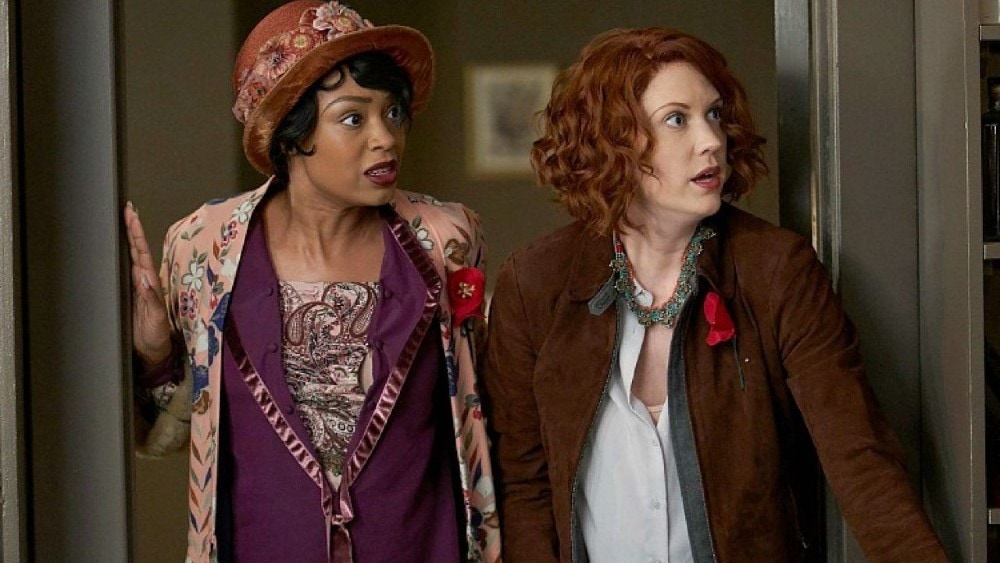 We go back to North America – specifically, Canada – with CBC’s Frankie Drake Mysteries, yet another show on our list that features a strong female lead character.

The eponymous Frankie Drake (played by Lauren Lee Smith from The Listener) is the first and only female private detective in Toronto during the 1920s, and she certainly uses this to her advantage.

She takes on the cases that the police don’t prioritize and because hardly anyone expects a woman to be a detective, she is able to seamlessly work her way through a case using her intelligence and fearlessness even if that means skirting around the law a little bit. T

thankfully, she can always rely on the help of her partner Trudy, and other women who work in the law enforcement and medical industries. 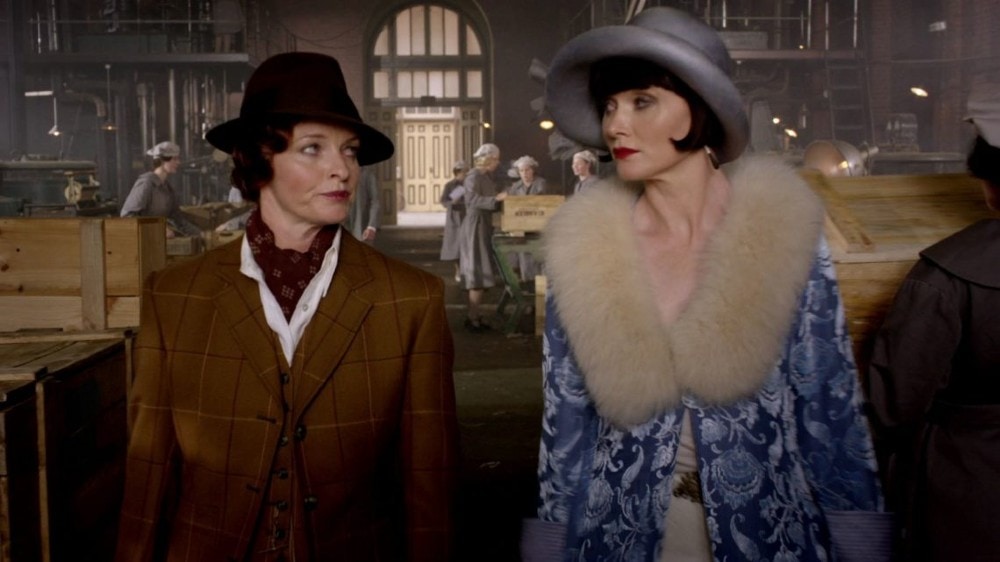 Largely based on the vast collection of historical mystery novels written by Kerry Greenwood, the Australian-made series is set in 1920s Melbourne, with the eponymous Miss Phyrne Fisher at the front and center.

She lives a glamorous lifestyle but is still a modern woman for the current times, using both her sharp wit and pearl-handled pistol to become the leading sleuth in the city.

While the first season has a story arc centered on the disappearance of Miss Fisher’s younger sister, each episode unveils a new crime for her to solve with the help of her assistant and the handsome Detective Inspector Jack Robinson. 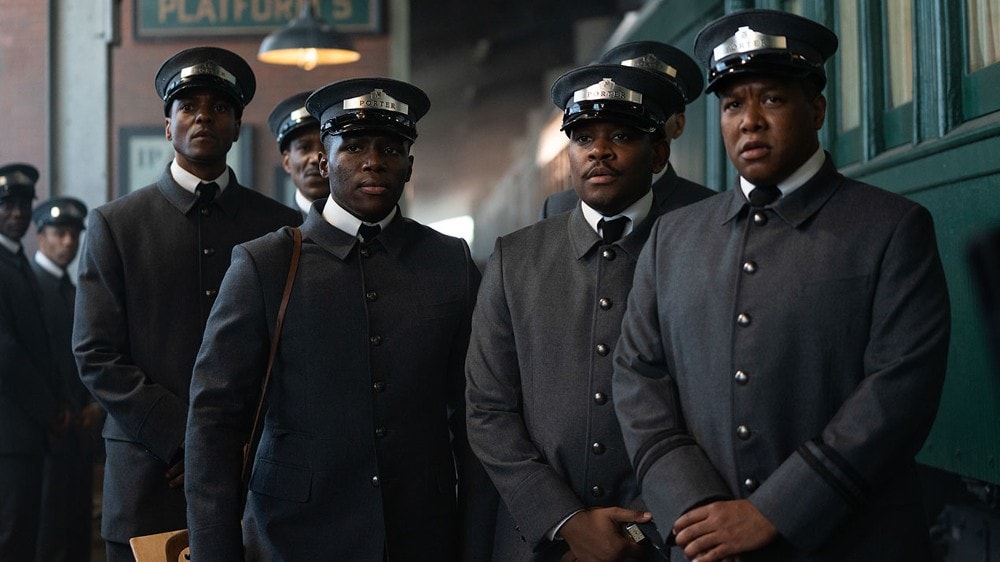 Another brilliant Canadian TV series from CBC Television is the recently-premiered The Porter.

The eight-episode series starts in 1921 and follows Junior Massey and Zeke Garrett, two Black train porters working in St. Antoine, Montreal which at the time was known as the Harlem of the North.

The Porter takes a dramatic look at what was it like to work as a Pullman porter on the train line between Montreal and Chicago and the events that led to the birth of The Brotherhood of Sleeping Car Porters – the world’s first Black labor union. 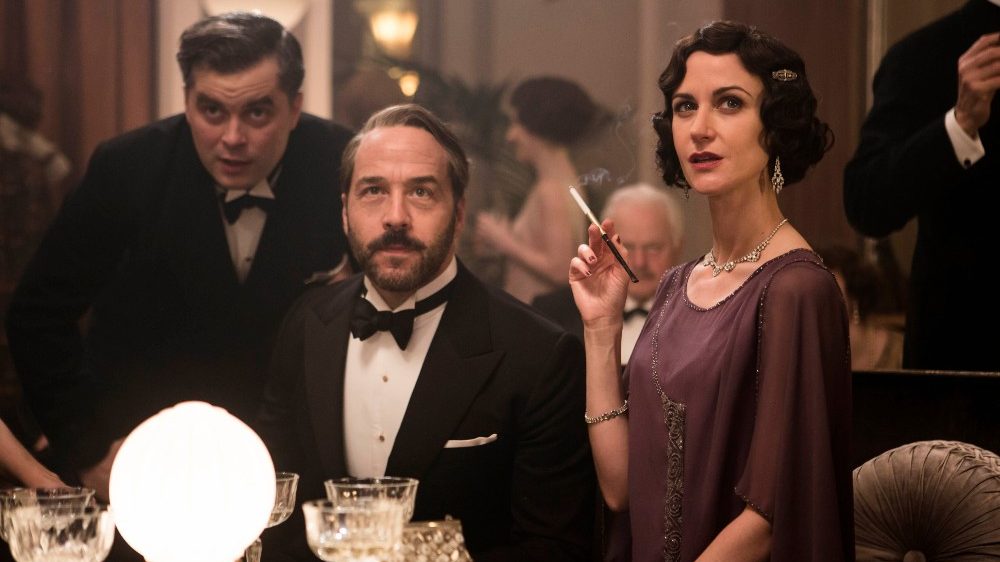 Selfridges has become quite a household name in the UK, being one of the largest high-end department stores in the region. However, how many people who shop there actually know the story behind its creation and rise to prominence – or of the man behind the name?

Mr. Selfridge is a co-production between ITV and Masterpiece for PBS and outlines the journey of the American businessman Harry Gordon Selfridge as he travels to the UK to establish himself in the fashion retail industry.

While the series itself begins in 1908, the fourth season jumps to 1928 where he encounters financial difficulties in maintaining and expanding his retail business. 20 years after the first store’s grand opening, however, sees the store saved and on its way to becoming the empire it is today. 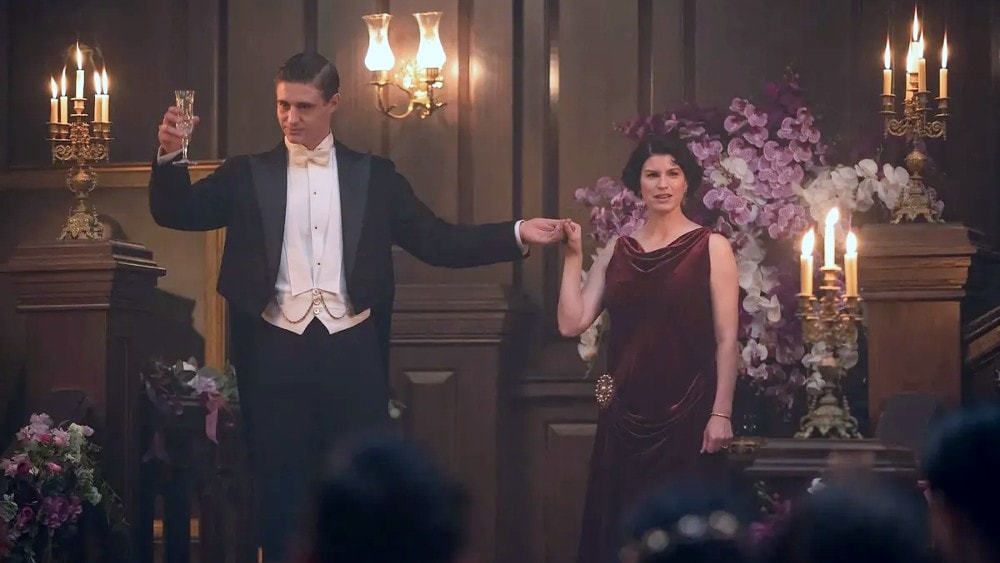 Among the newer series on this list of best 1920s-set modern-day TV shows is Lifetime’s limited series Flowers in the Attic: The Origin.

The series begins in 1920 and follows a young Olivia Winfield (soon to be Olivia Foxworth) as she meets her future husband.

Olivia is a young woman working for her father and looking forward to getting to vote soon. But after she meets Mrs. Malcolm Foxworth, the nation’s wealthiest man, she gives all that up to move to Foxworth Hall and become his wife. But Olivia quickly realizes that life at Foxworth Hall isn’t the fairy tale she expected it to be.

So over the course of the miniseries, we see the circumstances why Olivia turned into the cruel grandmother from Flowers in the Attic that locked her grandchildren in an attic. 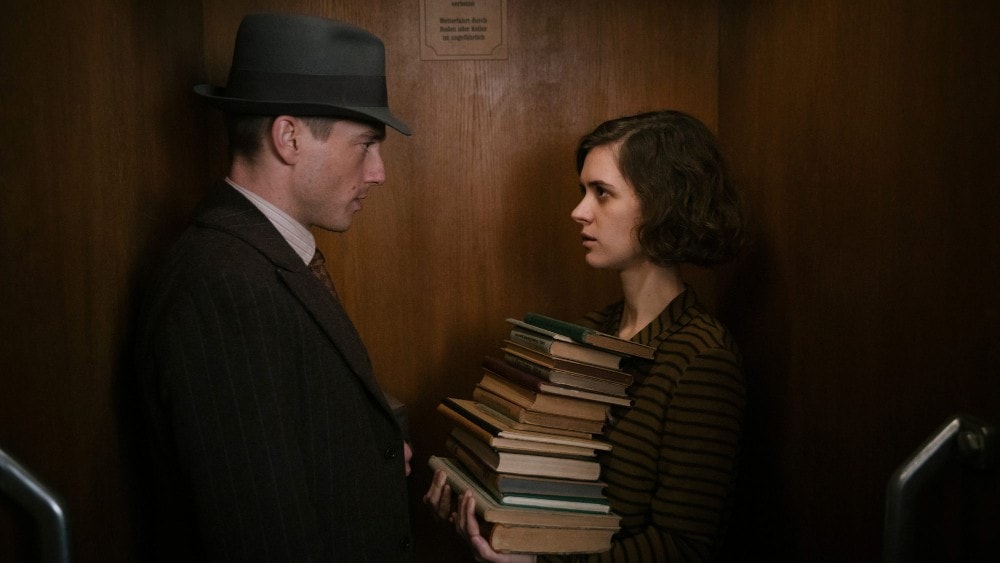 In the years following the end of the First World War, Germany was in a state of political and economic turmoil.

The German historical neo-noir series Babylon Berlin is set against the backdrop of the Weimar Republic (then also known as the German Reich or the German Republic) and begins in 1929.

The main protagonist is a young police commissioner named Gereon Rath who is transferred to Berlin – the epicenter of the country’s societal changes of the decade – from Cologne on an assignment to dismantle an extortion and pornography ring controlled by the Berlin Mafia.

Caught in the crosshairs of opposing political and social ideologies, Rath (with the help of a police clerk and his partner) uncovers a larger scandal about to unfold. 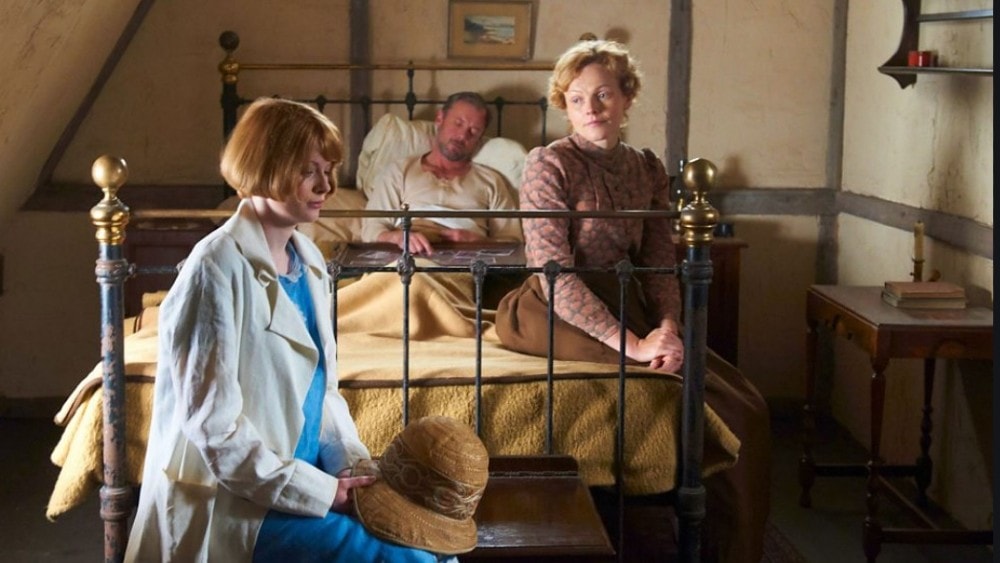 The last show on our list, BBC One’s The Village, takes us back to an English county named Derbyshire where we follow the story of Bert Middleton as he recounts his days growing up in a rural English village.

What sets The Village apart from other series is the format in which the story unfolds: Bert Middleton is actually now an old man, and we’re seeing his life through flashbacks as he tells us about his strict, alcoholic father, the first girl he fell in love with, his brother’s experiences with the war, and how he got entangled in politics (which serves as the central storyline for the second season that begins in 1923).

Though The Village is a grim look at life in the 1920s, it also offers a fresh perspective on life outside of the metropolis during a period of great change across the country and the world.