In the past, we’ve covered TV shows set across a myriad of centuries and decades – from the 16th century all the way up to the 1990s.

In this article, we’re continuing our collection of shows to give you a blast from the past with these modern TV shows set in the 1910s!

The decade of the 1910s played host to one of the most devastating events in modern history: World War I. Given that, it should come as no surprise that many of the series on this list tell stories directly about the war or at the very least, of those whose lives had been affected by it.

However, not all are centered on this tragic, four-year period; these TV shows from the 1910s aim to give you a view of the decade’s bigger picture, too.

Let’s get right down to it! 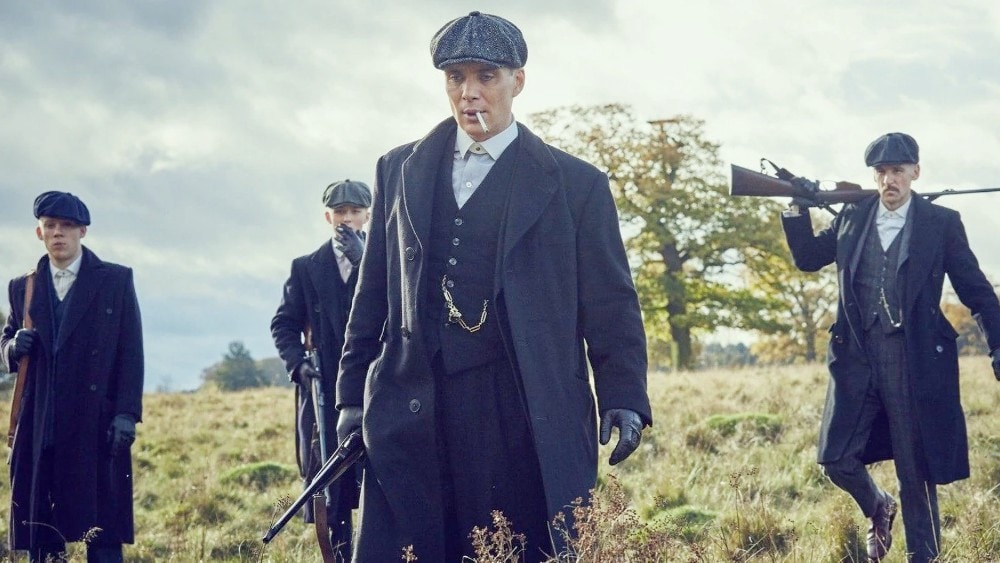 We’re starting off with Peaky Blinders, a historical crime drama that begins a few months after the end of the first World War in 1918.

Though events that unfold in the series are largely fictional, it is titled after a real-life street gang of the same name that was active in Birmingham during that period.

Peaky Blinders follows the exploits of the same now-fictional gang at the center of the show who are terrorizing the city’s streets.

Because of that, Major Chester Campbell has been tasked with taking them down, even as the gang’s influence continues to grow across the country and internationally. 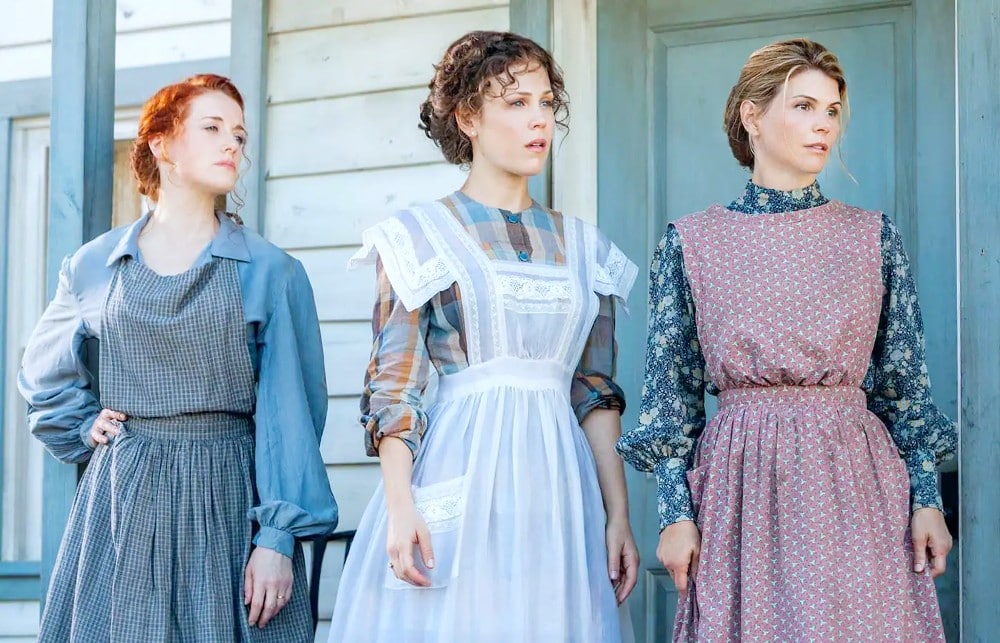 Hallmark’s When Calls The Heart follows the story of Elizabeth Thatcher, a young woman born into high society life in the 1910s.

Her vocation as a teacher, however, has led her to a small mining town called Coal Valley in Western Canada – her very first teaching assignment.

Life is much simpler than she’s used to but with the help of Abigail Stanton, Elizabeth is able to adjust to this life, even helping the townspeople lobby for the closure of the coal mine that caused the death of many of the town’s men before the start of the series. 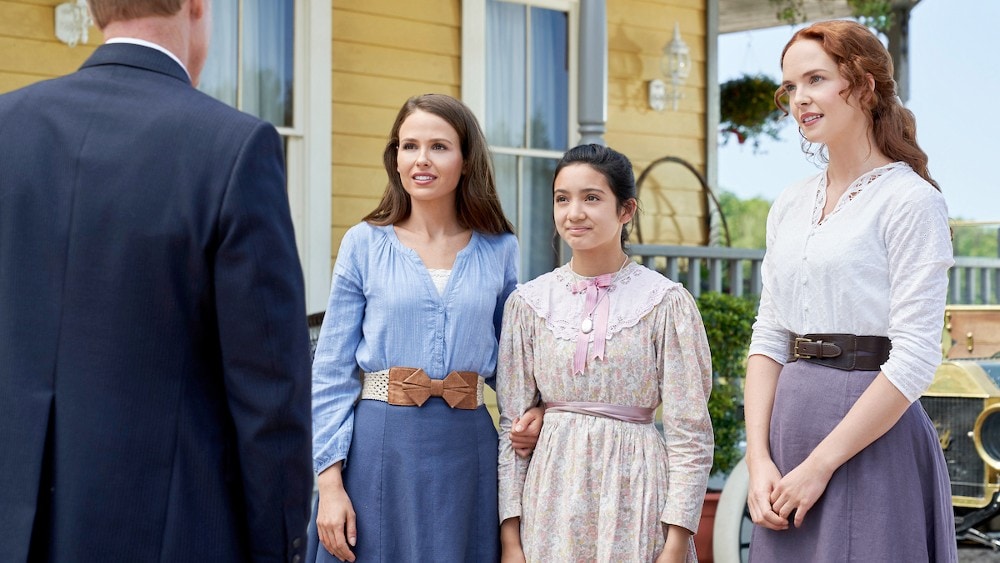 When Hope Calls is a spin-off series of When Calls The Heart and is currently on its second season; technically, it serves as a sequel to a Christmas special episode that aired between the parent series’ fifth and sixth seasons.

In this episode, viewers met orphaned sisters Lillian and Grace, who were separated at the age of seven and five, respectively.

When Hope Calls sees them reunited as adults in 1916 when they opened up an orphanage in a small, northwestern Canadian town called Brookfield.

The series follows how the sisters strive to take care of the children who experienced what they did in their youth. 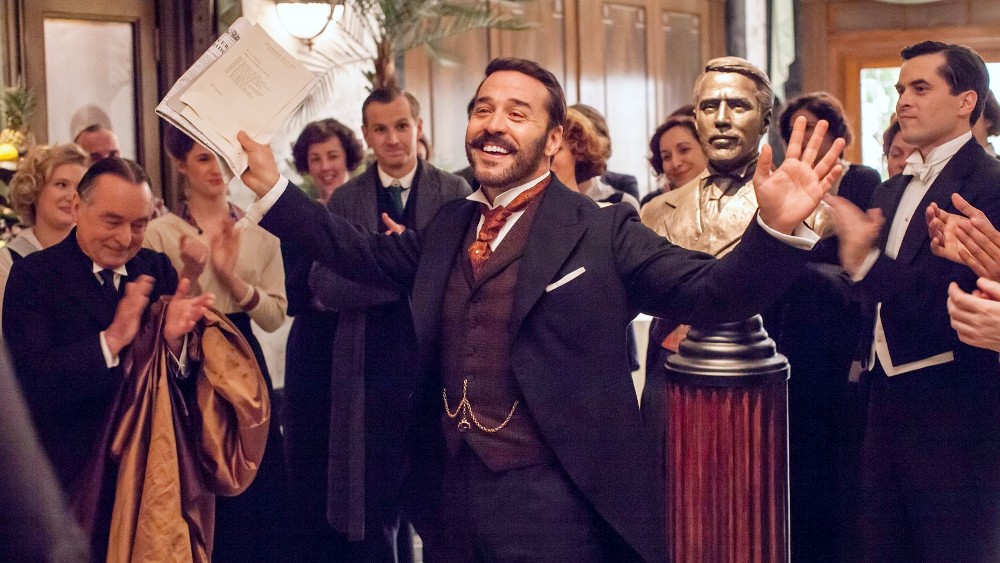 Mr. Selfridge also made an entrance on our list of TV shows set in the 1900s as its first season took place over this decade.

As a reminder and quick overlook, Mr. Selfridge tells the story of Harry Gordon Selfridge, the American retail businessman who established and built the empire that we now know as the chain of British department stores, Selfridges.

These seasons chronicle Harry’s struggles in the early years of his business, as well as how it affected his personal life.

In one way or another, it seems that everyone has heard of Downton Abbey.

The title of the series is also the name of the fictional Yorkshire country estate where it is primarily set, and which houses the aristocratic Crawley family at the center of the show.

Downton Abbey starts with the sinking of the Titanic in 1912, which leaves the Crawleys in disarray as the accident led to the death of the estate’s heirs.

Over the course of the series, many real-life historical events unfold as we watch the family navigate through and rise above them. 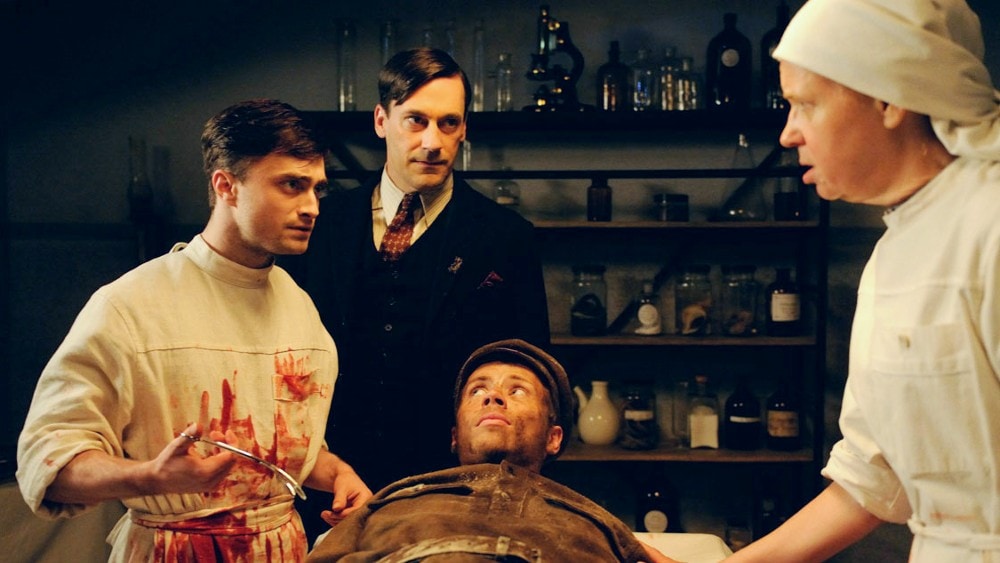 A Young Doctor’s Notebook unfolds in Russia and centers on the fictional doctor Vladimir Bomgard.

It’s based on a series of short stories of the same name written by Mikhail Bulgakov, which were in turn inspired by his own experiences as a doctor between 1916 and1918.

A Young Doctor’s Notebook chronicles Dr. Bomgard and his team’s attempt to diagnose and cure his patients who, due to isolation and uneducation, often refuse his treatment.

Much of the show’s dark humor is in the exchanges between the young Dr. Bomgard and himself 17 years later – the older of whom provides exchanges and commentary on his younger self’s life and mistakes. 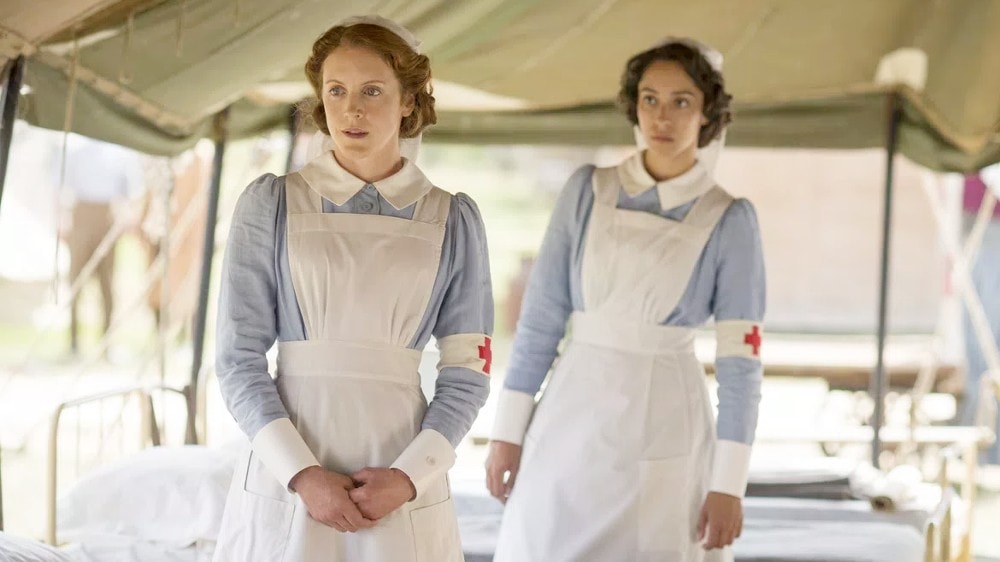 The Crimson Field is the first on our list that directly chronicles events during the First World War, though not quite from the central perspective of soldiers.

Instead, viewers witness the hard work of the team of doctors, nurses, and volunteers at a fictional field hospital in France.

Despite their rigorous training, nothing could have prepared them for the difficult task of not only repairing the wounded soldiers’ bodies but also their spirits. 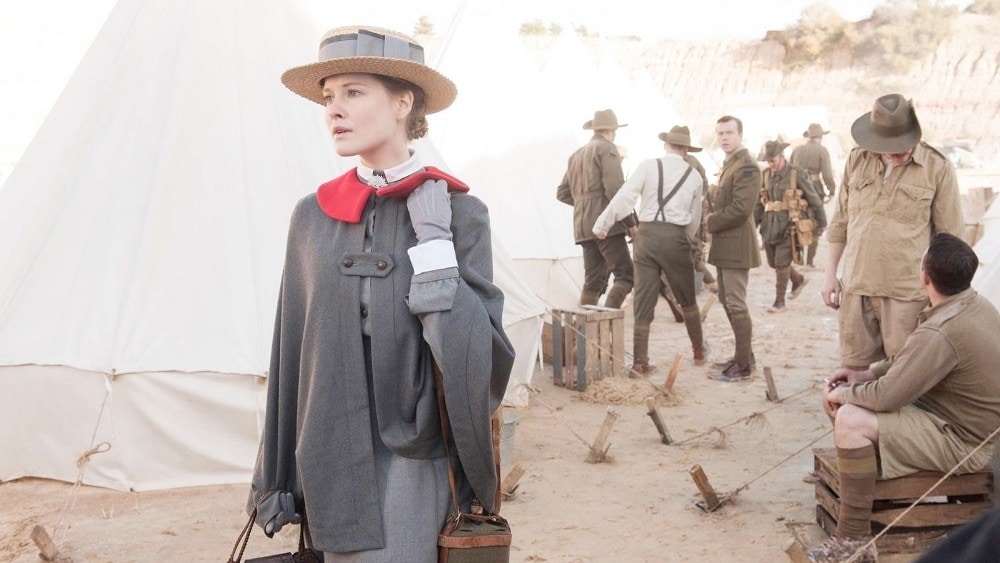 Just like The Crimson Field, the Australian period drama ANZAC Girls tells the untold stories of those in the medical profession who are often overlooked when talking about war efforts.

The show is based on The Other ANZACs, a book written by Peter Rees, as well as real-life accounts lifted from letters, photographs, diary entries, and other historical documents.

Given this, ANZAC Girls is a realistic account of the nurses who served in various parts of the world, and how their lives were affected by the sadness and tragedies brought about by the Great War. 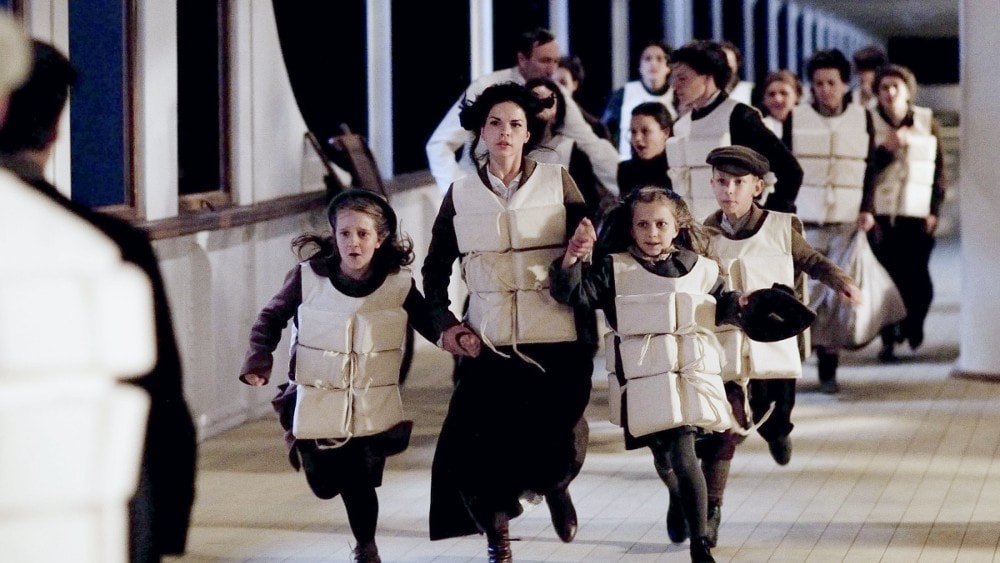 Even if you haven’t seen the classic Titanic film from 1997, you’re bound to at least know its story.

The events of that historical tragedy were once again reimagined and brought to life with the four-part miniseries, Titanic.

Each of the first three episodes laid out the stories of various characters aboard the famed ship, from those in the underbelly as part of the crew to immigrants seeking a new life in America, to the wealthy socialites of the world.

As the Titanic sinks, the idea of a social divide is thrown out as everyone stands on equal ground to try and survive. 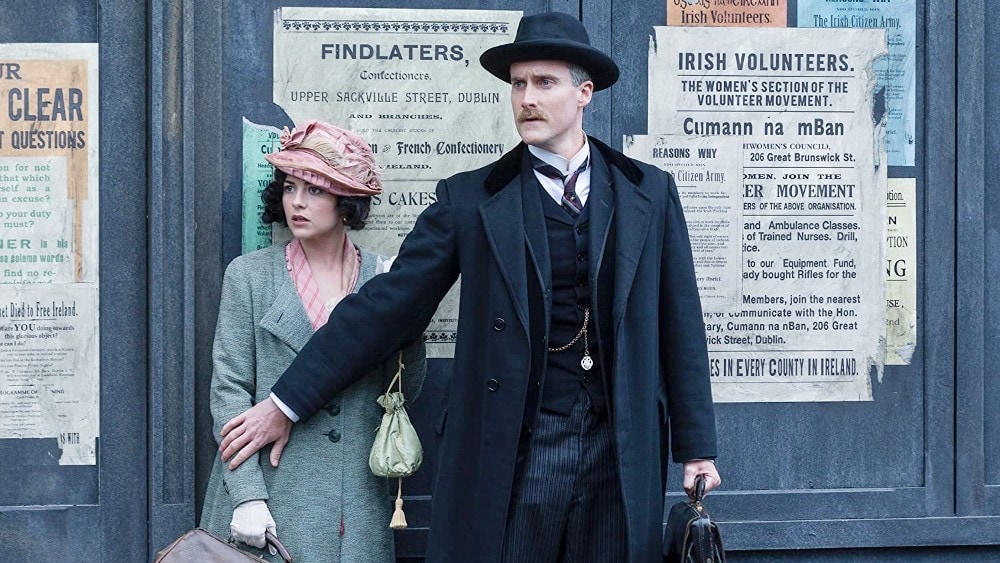 During the First World War, there were other battles being fought across the world that most of us don’t know about, and one of those was the 1916 Easter Rising in Ireland where they were fighting for their independence from British rule.

What was expected to be a short campaign for freedom stretches out as a sense of nationalism rises, and viewers watch it unfold from the eyes of friends from London, Dublin, and Belfast who are doing all they can to play their part in the rebellion. 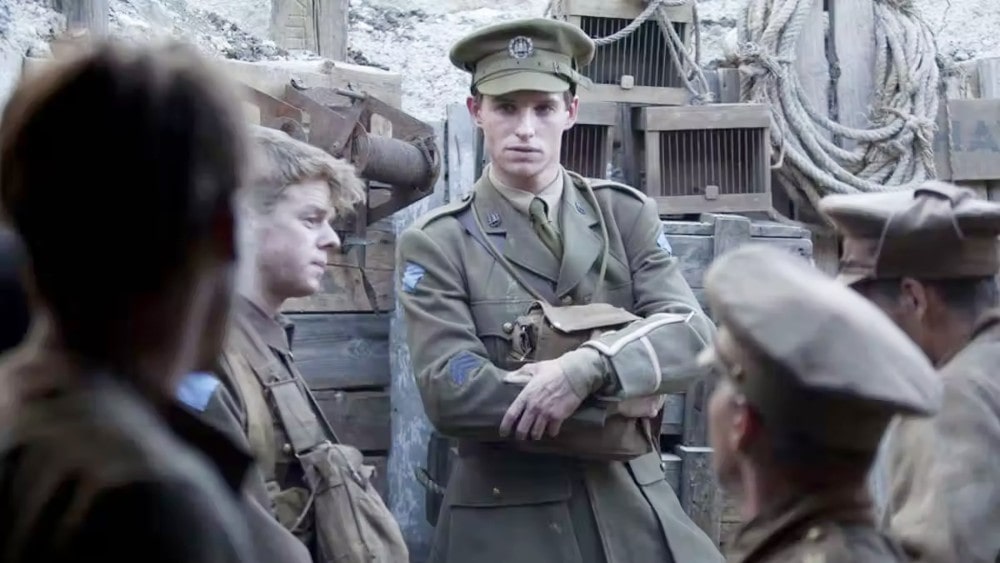 Sebastian Faulks’ 1993 novel Birdsong is the inspiration for this two-part period drama of the same name.

It tells of a love story between Stephen Wraysford, a young Englishman in France to learn about business, and Isabelle Azaire, the wife of the man mentoring Stephen.

The series switches timelines from flashbacks of Stephen and Isabelle’s affair to Stephen’s experiences during the war, showing how his love for Isabelle and the uncertain but desperate hope to be reunited with her carries him through the torments of battle. 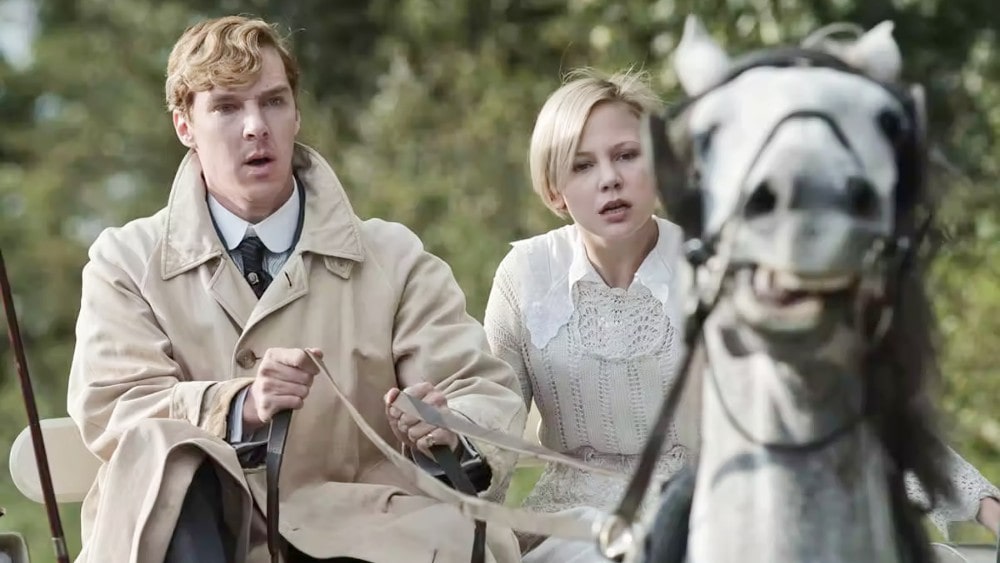 Between 1924 and 1928, British novelist Ford Madox Ford wrote a series of four novels entitled Parade’s End, which is the basis for this eponymous five-part miniseries from BBC.

It begins before the start of WWI and carries through to the end of the war; it follows the complicated and interspersed stories of three Britons who have distinctly different religious and political beliefs.

Despite this, their lives get intertwined and when the war breaks out, their convictions – and those of the upper-class society around them – are shattered. 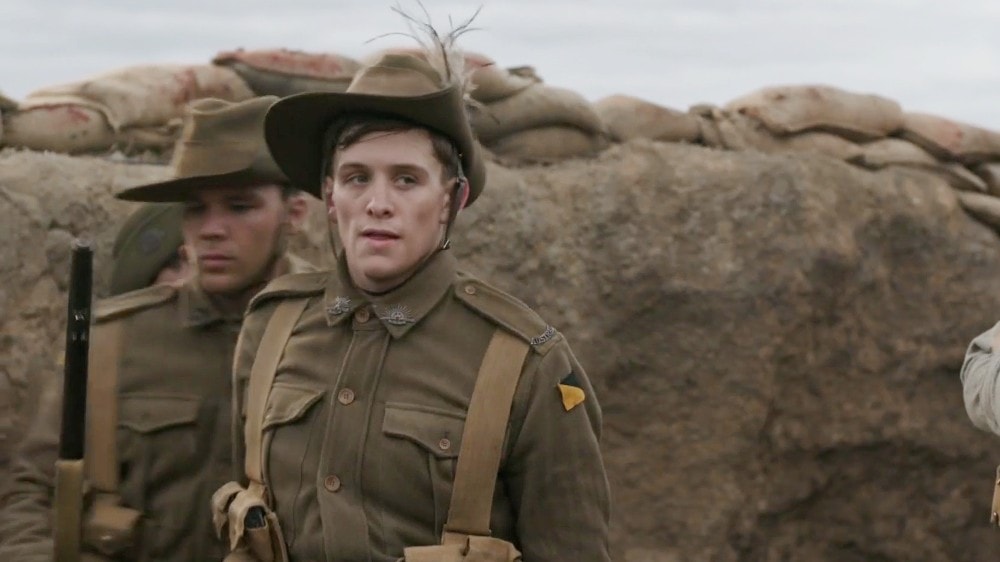 The Gallipoli Campaign has been credited as the turning point for rising nationalism in the ANZAC region and is still commemorated to this day – despite it being unsuccessful.

The Australian miniseries Gallipoli unfolds over just seven episodes and tells the story of Tolly Johnson, a 17-year-old who lies about his age so he can enlist to be part of the campaign alongside his brother, Bevan.

Gallipoli takes us not just through Tolly’s experiences throughout and after the war, but also the personal journey he takes to discover himself. 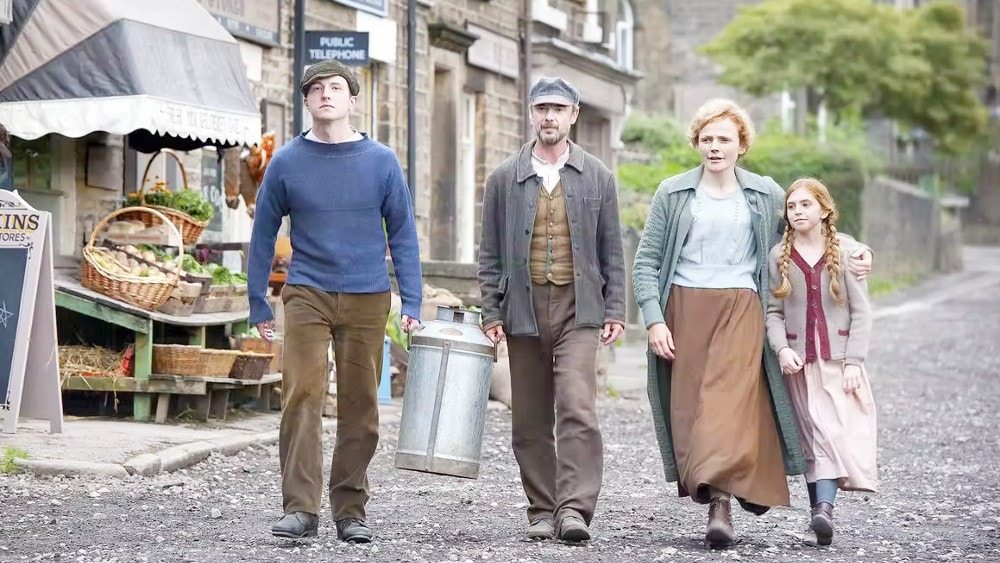 The Village is a fascinating series that takes its viewers not through the lives of a central character per se but, as the title suggests, through a village in Derbyshire, England as it experiences all the dark and turbulent times of the 20th century.

Though it’s the village that’s at the center, the narrative unfolds through the eyes of Bert Middleton, a man who lived there throughout these 100 years.

As he tells his story to a documentary filmmaker in the present day, The Village takes us through his flashbacks from boyhood to old age. 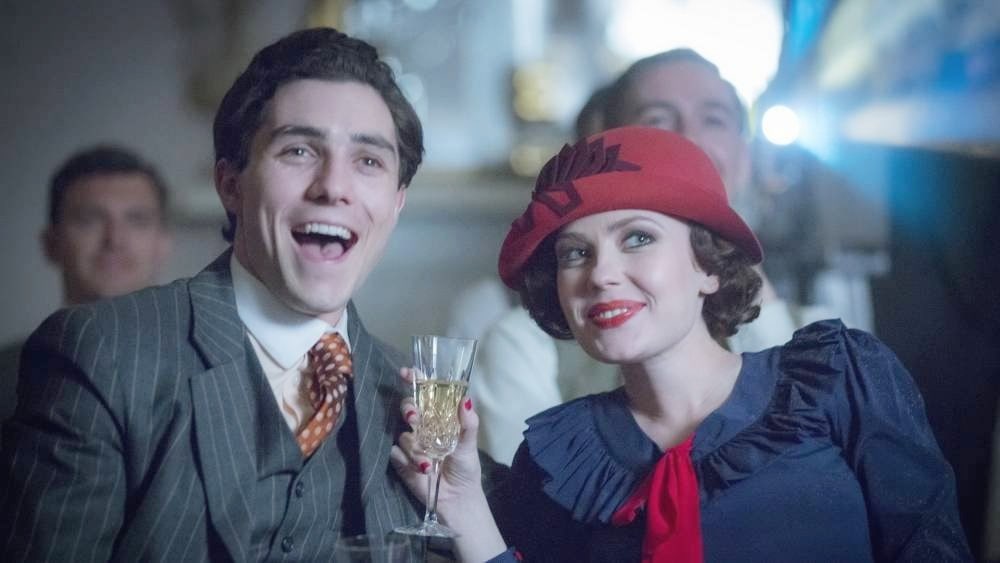 Nine Network’s anthology series Underbelly is a true-crime drama series that focuses on a case or person per season, based on real-life events of course.

Its sixth season, Underbelly: Squizzy, tells the early life and criminal career of the notorious gangster from Melbourne, Squizzy Taylor.

When he ruled the streets in the early 20th century, Squizzy was one of the most feared criminals in the city.

Underbelly: Squizzy takes its viewers through how he came to be so, all the way up to his death. 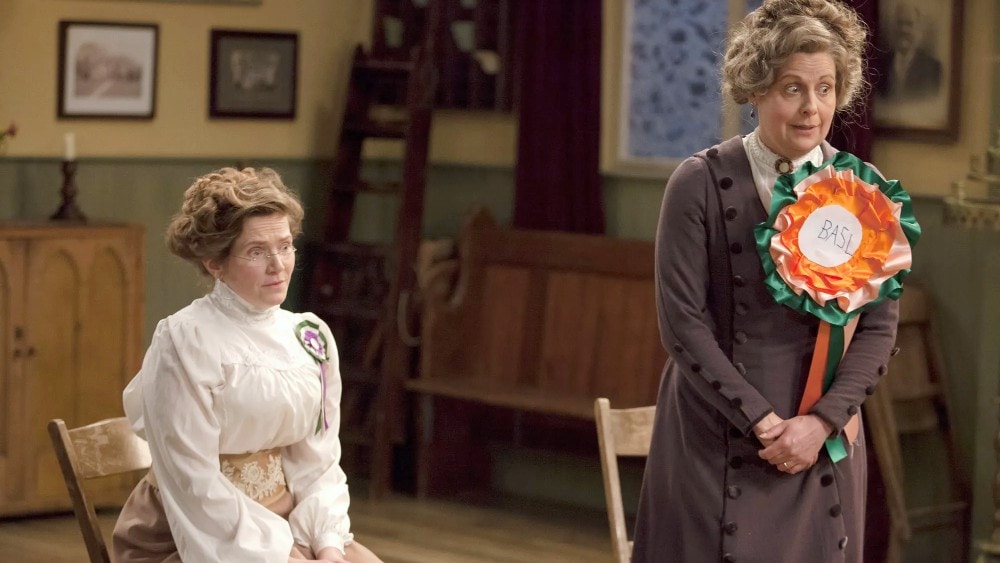 Up The Women is the first sitcom on our list!

Set in 1910, the series follows the women from the Banbury Intricate Craft Circle as they begin their journey to support the women’s suffrage movement.

One of the craft group’s members, Margaret, had witnessed the original movement in action in London and brought it back to the women of Banbury.

The Banbury Intricate Craft Circle Politely Requests Women’s Suffrage is born as a result but comes with its own share of opposition. 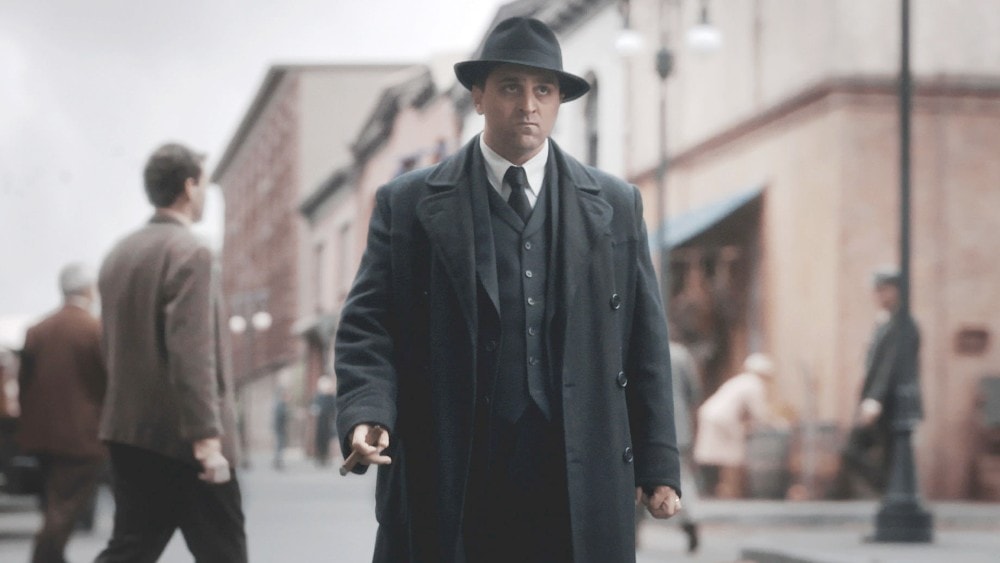 Like the Australian Underbelly, the AMC crime docu-series The Making of the Mob dramatizes the story of notorious criminals across periods in American history.

While the first season took viewers to New York to introduce Lucky Luciano, this second season is set in Chicago and depicts the life and rise to the top of the criminal food chain of notorious gangster, Al Capone.

He changed the game of the Chicago mafia completely, making the Chicago Outfit so feared that it paved the way for future crime dynasties in the area. 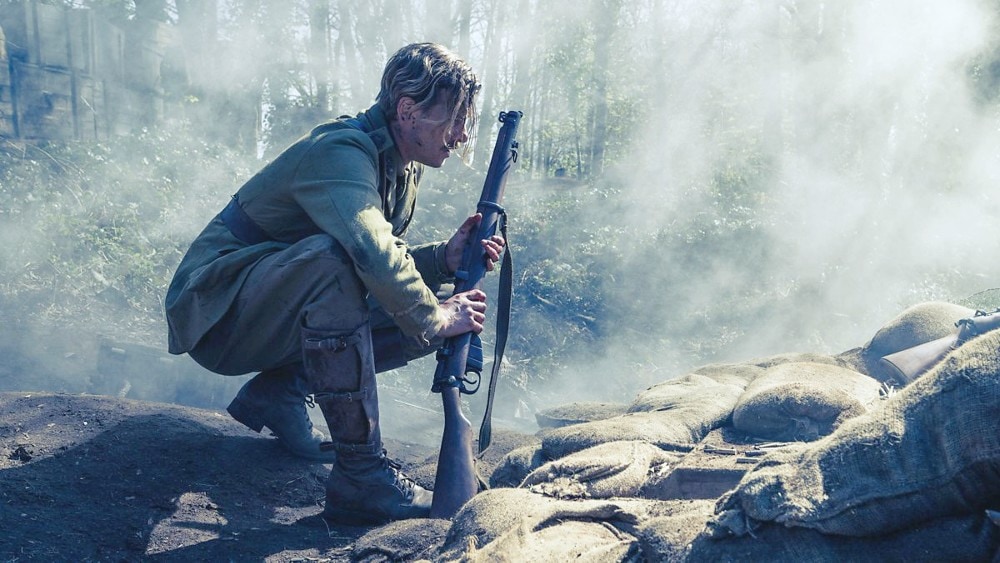 Our World War is a three-part miniseries that featured a brand new cast in each of its hour-long episodes.

The goal of the series was to depict the lives of the 80,000 British soldiers who fought in World War I, particularly on the Southern Belgium front.

Using modern film techniques to depict the reality of the wars more accurately, Our World War utilized first-hand accounts of the soldiers who really experienced it as well as how this affected them both on and off the battlefield. 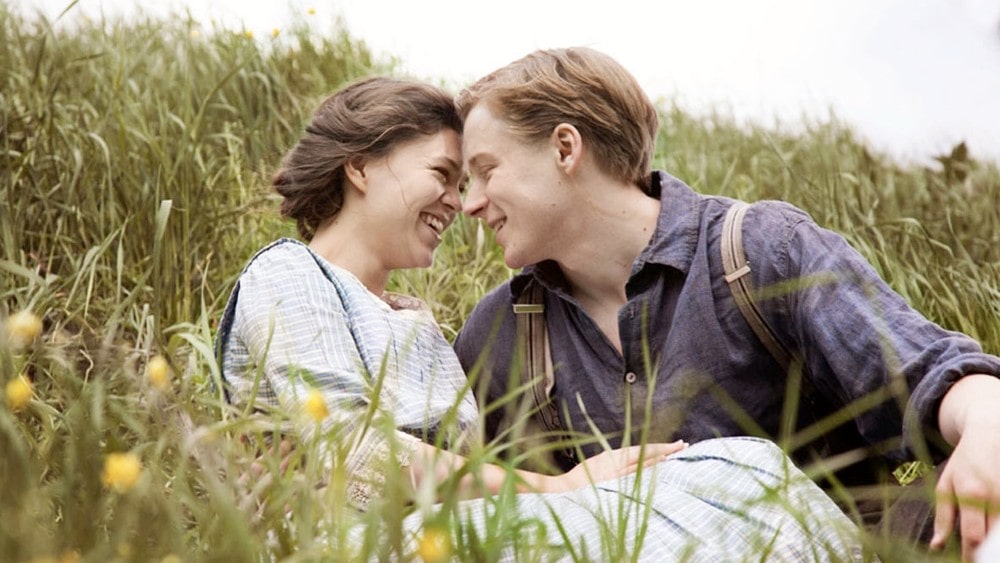 There’s no more jarring, raw, and real way to understand the horrors of war than to view it through the eyes of the youth who found themselves in the middle of it.

The Passing Bells does so through Tommy Edwards, a 17-year-old Briton from a small town who joins the war to rebel against his parents, and Michael Lang, the carefree son of a farmer who yearns for adventure outside of his German home.

The series depicts their through the war and their convictions to get back home to their families.