Fancy a trip through time? You may have already perused our recent article on modern TV shows set in the 1960s, where many of the shows provided narratives around the rising civil rights movement, the Vietnam War, the peak of space exploration, and even the assassination of President JFK – and that’s just America!

In many ways, the 70s were a continuation of various changes that started in the preceding decade, particularly with the fight for gender equality, gay rights, and civil rights, as well as the anti-war protests.

However, the 70s also gave rise to an increased push for environmental awareness and even significant pushback from the conservatives in politics. And let’s not forget President Nixon’s Watergate Scandal that led to the more laidback, freedom-fighting, peace-loving sentiments of the 80s was already starting to blossom.

To get an idea of what all that was like, we’re continuing our travel through with more modern shows that are now set in the 1970s! 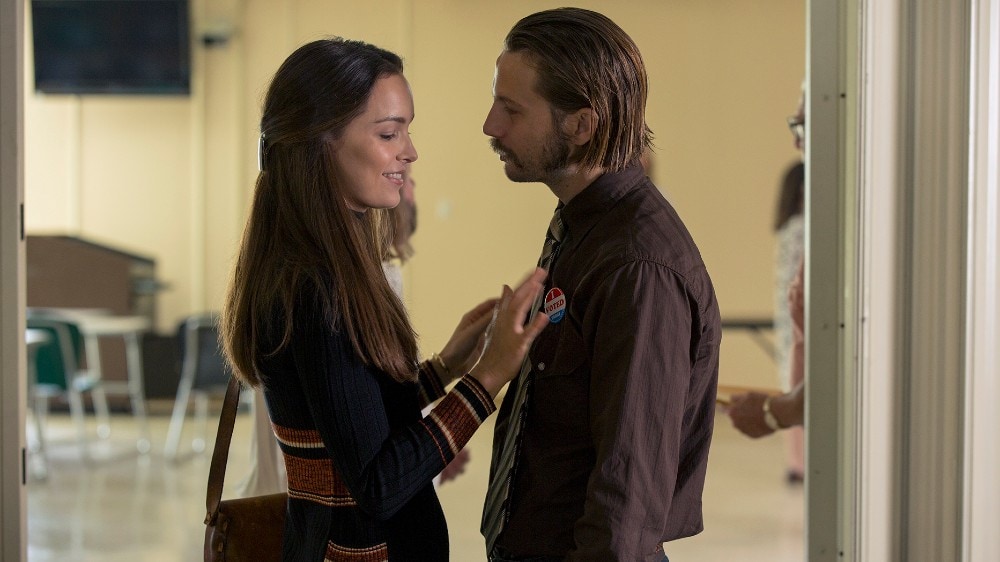 Cinemax’s Quarry is an eight-episode neo-noir crime drama that takes place in Memphis, Tennessee in 1972. In it we meet Lloyd McKinnon Conway, Jr., a.k.a Mac or Quarry, a former Marine who has returned to his home and wife in Memphis after two tours in Vietnam.

However, he is surprisingly shunned by his loved ones and the public in his community. Mac is soon caught up in a “network of killing and corruption that spans the length of the Mississippi River”, even as he struggles to adapt to his surroundings and deal with his experiences in the war. 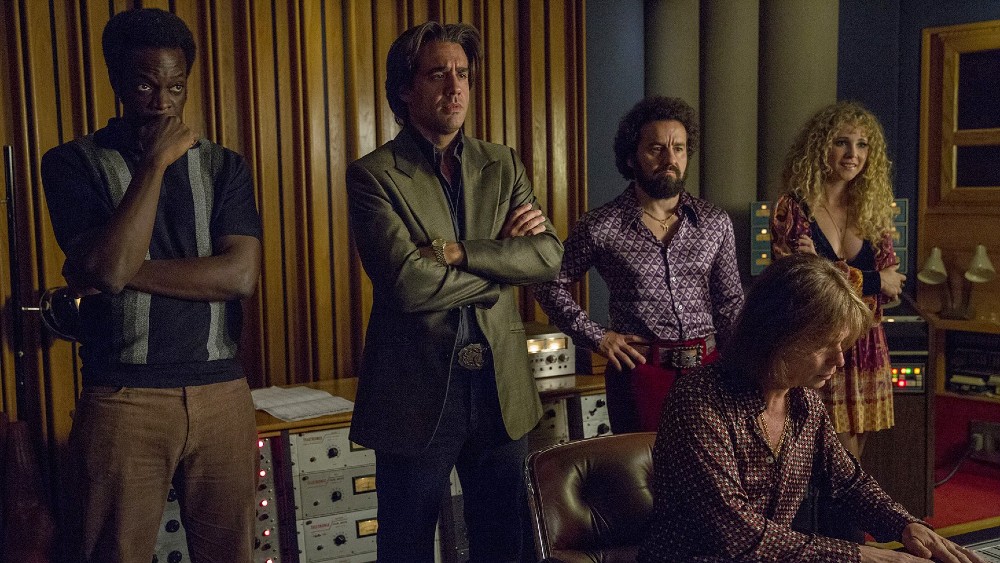 With such names as Mick Jagger and Martin Scorsese behind its creation, it’s a shame that HBO’s Vinyl wasn’t given a second season to truly flourish as a series as it shone a light on the changing landscapes of the American music scene.

Richie Finestra is a record executive and the founder and president of American Century Records. He’s always had a strong passion for music, but that may not always translate to finding the right talent that’ll lead to success for his company. Richie must learn to navigate the New York soundscape to save his company and keep his personal life together. 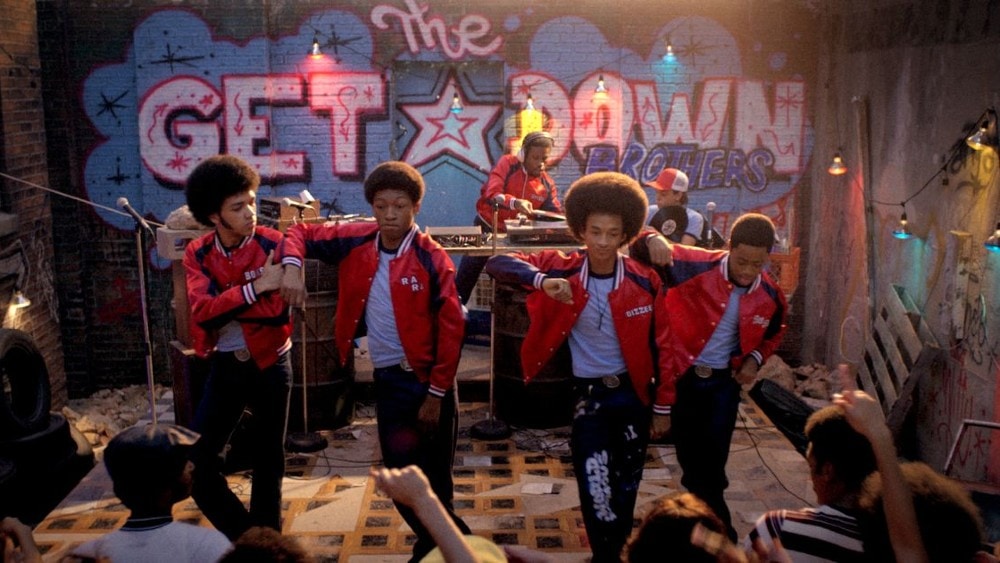 In connection to the changing music scene previously mentioned in Vinyl, the 70s was the new era of disco, punk, and hip-hop. Netflix’s The Get Down is a musical drama that provides a view into that scene from the perspective of the teenagers living in it.

Set in the Bronx, New York City from 1977 to 1978, The Get Down follows Zeke Figuero, a young teen with a gift for words and music. He and his friends, including the aspiring DJ Shaolin Fantastic, dream of becoming successful music artists but must first survive the poverty and gang violence prevalent in the Bronx neighborhood. 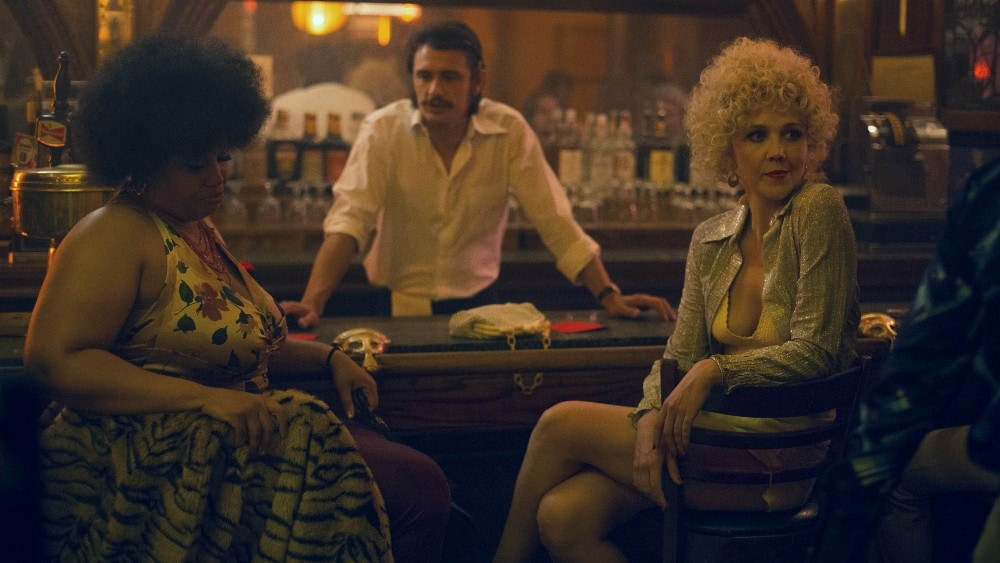 The Martino twins work as associates for the Mafia to under the watchful influence of the Gambino family’s Rudy Pipilo, where they navigate the mob’s burgeoning sex business in Times Square. There, they meet Candy, a former prostitute who used her ambition to become an adult film actress and director. 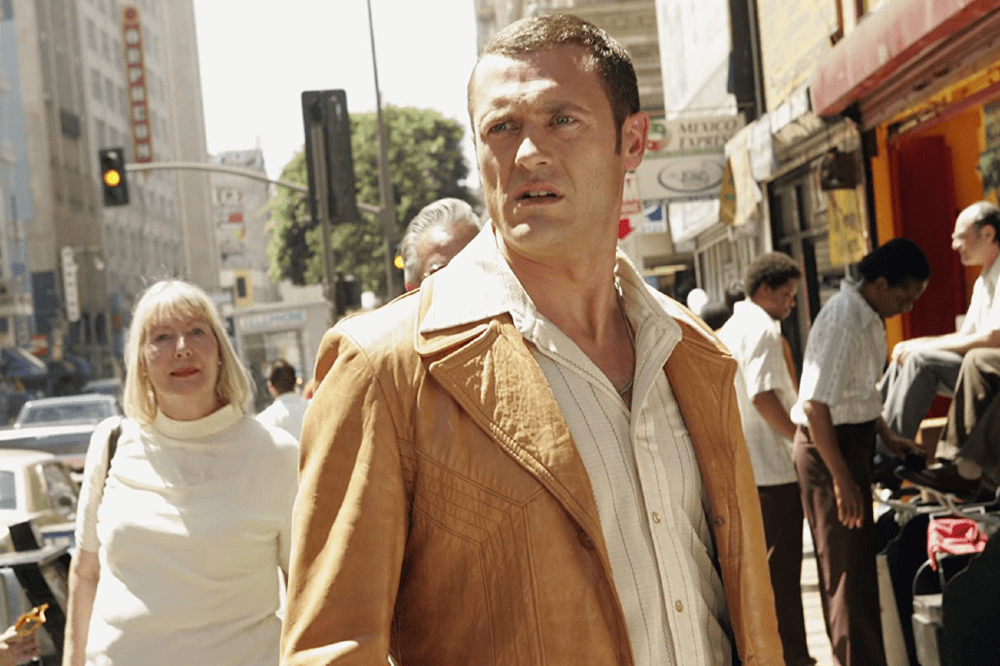 ABC’s Life on Mars was adapted from the British series of the same name (largely influenced by the music of David Bowie) and takes on much of the central premise of the original – with just a few differences in storyline progression.

Sam Tyler, the show’s main protagonist, is an NYC police detective who unfortunately gets in a tragic car accident at the onset of the series. He mysteriously awakens in 1973 – in a life that is still his and yet is completely unfamiliar. He often makes references to the future he knows in 2008 and even encounters opportunities to prevent crimes he investigates in his reality. Throughout the series, viewers are often questioning what’s really going on: is Sam time traveling, in a coma, dead, or something else entirely? 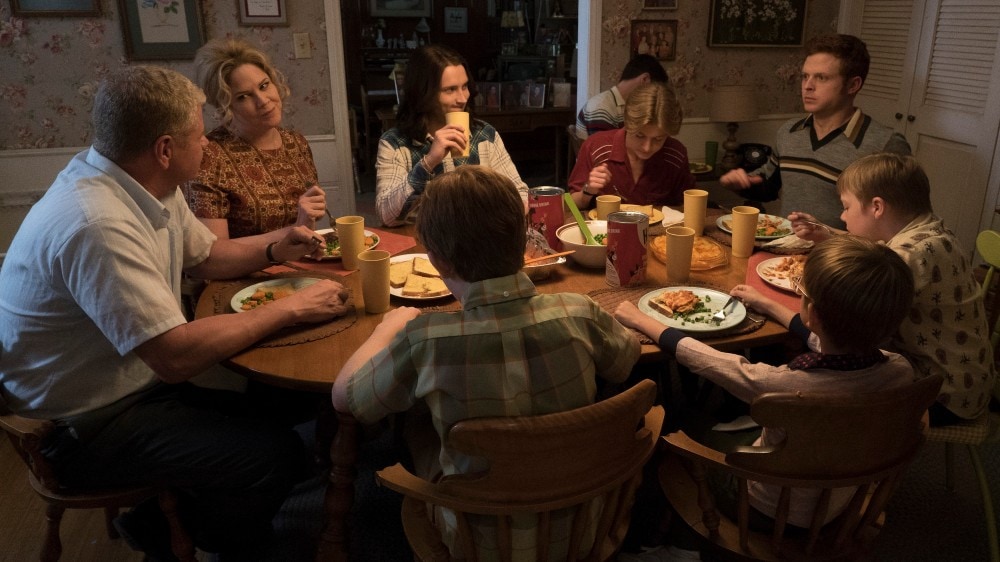 The Kids Are Alright is a comedy series from ABC that, in a stark departure from the previous show’s science fiction elements, follows the story of a nuclear family living in suburban Los Angeles in the early 1970s.

The Clearys (parents Mike and Peggy along with their eight sons) are a typical Irish Catholic family trying to survive regular life in a working-class neighborhood. With eight boys – the youngest of whom is still a baby – cramped in a home with three bedrooms and just one bathroom, chaos is just a part of the everyday. However, their lives are changed forever when their eldest decides to quit the seminary and “change the world”.

As a whole, the Fargo series takes an anthological format with each season set in a different era and with different characters, though at times with minor story connections and with references to the film works of the Coen brothers.

Season 2 of the FX’s series serves as a prequel to the events in the first season and takes place in the Minnesota in 1979. The overarching season storyline centers on events surrounding the character of Rye Gerhardt, son of the matriarch of the Gerhardt crime family. These include the investigation of a triple homicide connected to Rye, as well as a married couple’s cover-up of Rye’s hit-and-run death. 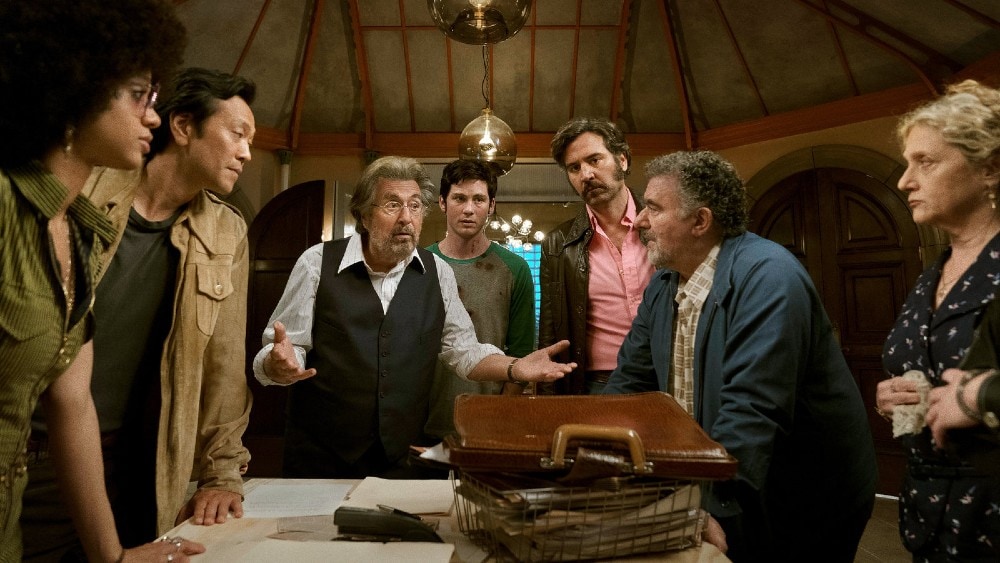 Hunters is one of the newest 70s-era TV series on our list, having just premiered its first ten-episode series this February 2020. Amazon has yet to announce whether it will be renewed for a second season following mixed reception, criticism, and some polarizing reviews, but the mix of historical fact and fiction may be up your alley.

Inspired by real Nazi hunters and events surrounding the discovery of the US government’s Operation Paperclip, Hunters reveals the secret plans of Nazi war criminals to establish a Fourth Reich in America. Meyer Offerman, a Holocaust survivor and leader of the Hunters, and Jonah Heidelbaum band together following the death of Heidelbaum’s grandmother to bring justice to the escaped Nazis and “thwart [their] new genocidal plans”. 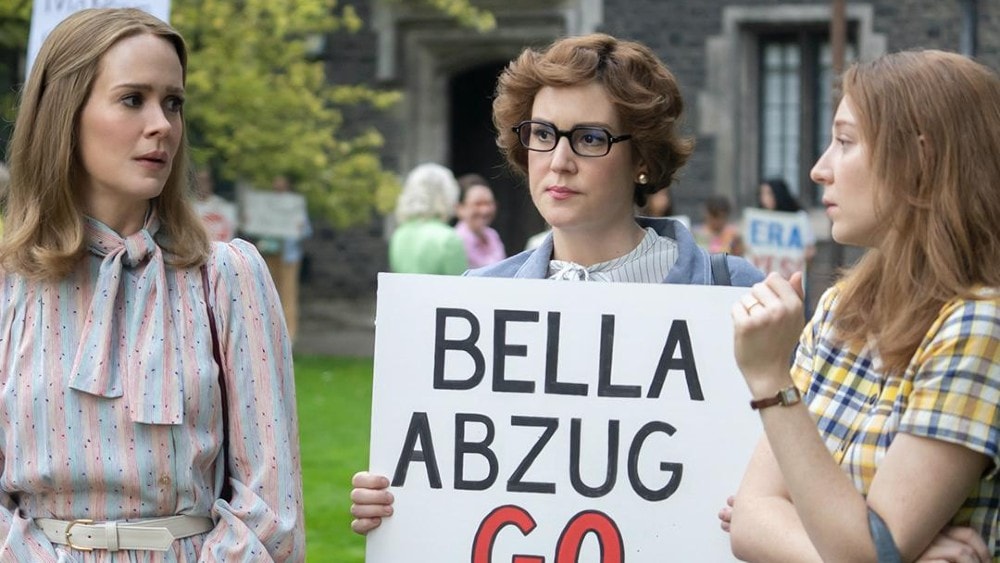 As we mentioned, as much as equality and the fight for it was on the rise during this decade, no movement for progress ever goes unopposed. Hulu’s Mrs. America unfolds a strong political narrative that holds its legacy even until today.

The Equal Rights Amendment (ERA) was first introduced in the US Congress as far back as 1923 and the increased push for women’s rights in the 60s certainly increased support. However, the 70s saw significant pushback from conservative women – led by Phyllis Schlafly. This shift in American politics, though partially fictionalized in terms of certain characters, is what Mrs. America tackles so effectively. 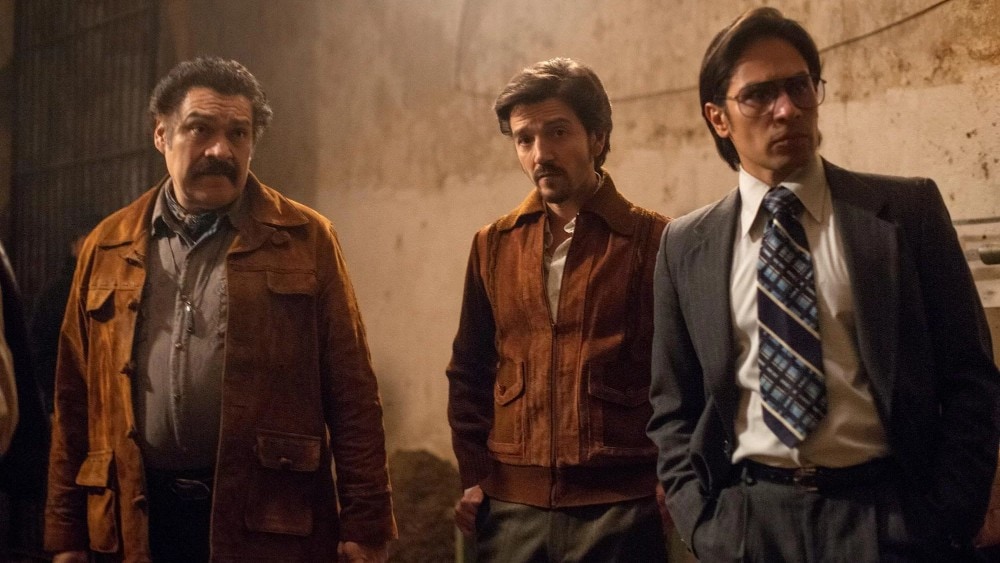 Netflix’s Narcos is a fascinating and comprehensive look into the life and legacy of drug kingpin Pablo Escobar, as the third and last season chronicles events even after his death with the DEA fighting to take down his network. However, strictly speaking, it’s part of Narcos’ first season that is set in the 1970s.

The drug trade was in full swing in the 70s and this is what Escobar capitalized on beginning in the mid-1970s. He founded the Medellin cartel during this time and managed to set up the first drug smuggling routes into America. Because of this, the demand for cocaine quickly shot up in the country. Though Narcos stretches its story past the 70s, you may be interested in the rising lucrativeness of the drug trade during that time. 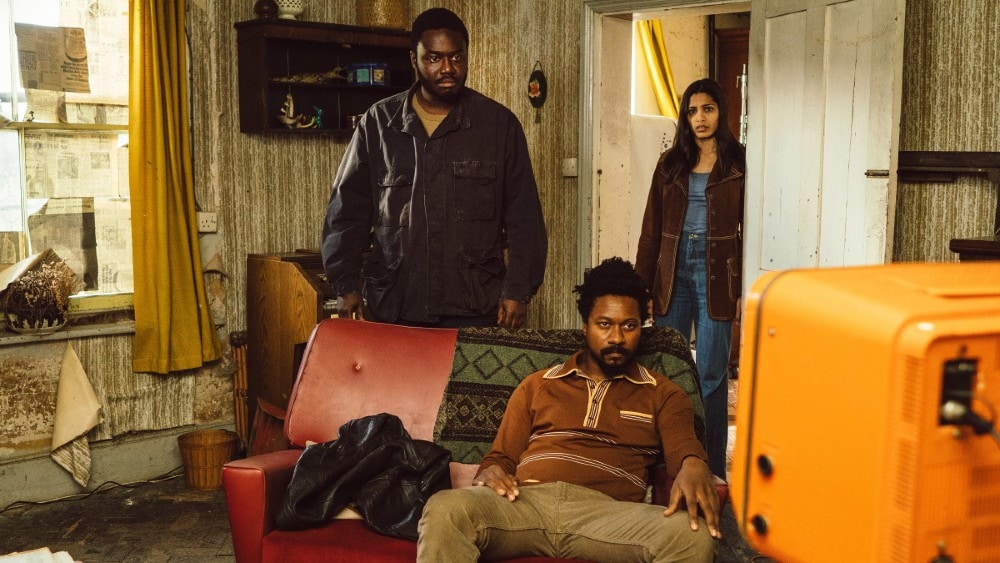 Finally, our last show on the list takes us across the Atlantic to London, where the civil rights movement was just as explosive as it was in the United States. Guerilla is a British six-part miniseries set early in the decade and tells a poignant love story unfolding in the midst of growing political activism and Immigration Act 1971.

Guerilla’s main protagonists, Marcus Hill and Jas Mitra, are a politically active couple inspired by real-life members of the British Black Panthers and Race Today Collective, Farrukh Dhondy, and Darcus Howe. According to the Showtime website, characters Hill and Mitra have their “relationship and values are tested when they liberate a political prisoner and form a radical underground cell in 1970s London”. 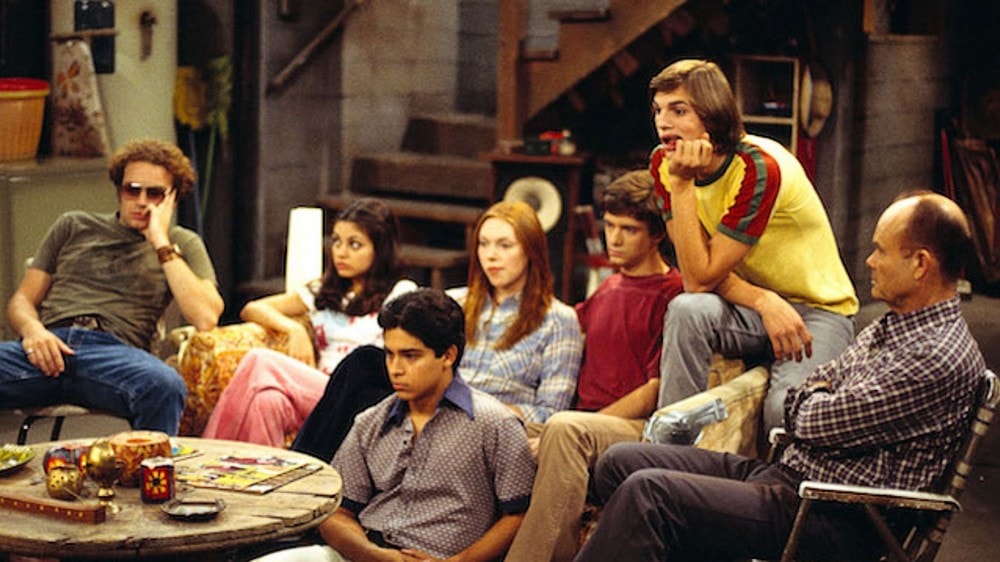 As a bit of a bonus, and to lend a lighter perspective, you might also want to check out the sitcom classic, That ‘70s Show! The show, though hardly really “modern” as it aired from 1998 to 2006, paid homage to many pivotal developments and social issues present in the titular decade. These include underage drinking and drug use, mistrust of the American government (perhaps following the Watergate Scandal), technological developments like cable TV, guest stars from famous 70s TV shows, and even episodes titled after famous 70s rock bands’ songs! 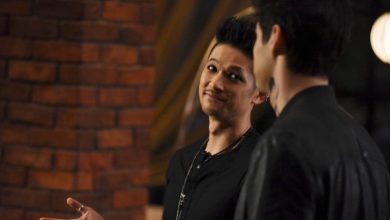 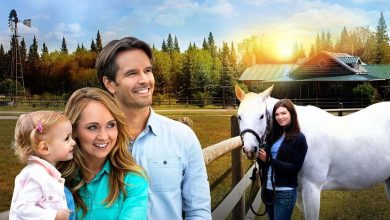 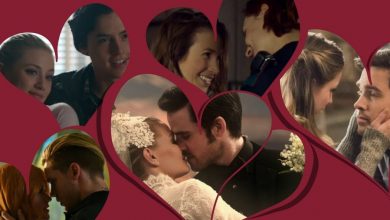