Many different images may come to mind when one thinks of the frontier.

For some, it may evoke images of vast plains and beautiful mountains for as far as the eye can see, for others, it could be about ranches and farms, and for others still, it might be more reminiscent of the Wild West than anything else.

Well, in a nutshell, one could say that the frontier was all of these things combined. Strictly speaking, the “frontier” was like a borderland – the boundary between two territories – and encompassed every aspect of life during the American expansion.

Frontier life is characterized by hard work and manual labor, where the whole family pitched in with the work.

Frontier life may have been at its peak over a century ago, but we still love to watch shows and movies about the era until now.

That’s why we’ve put together a list of the best TV shows about frontier life!

These include scripted shows about both the American and Canadian frontier, as well as a few docuseries to top things off. 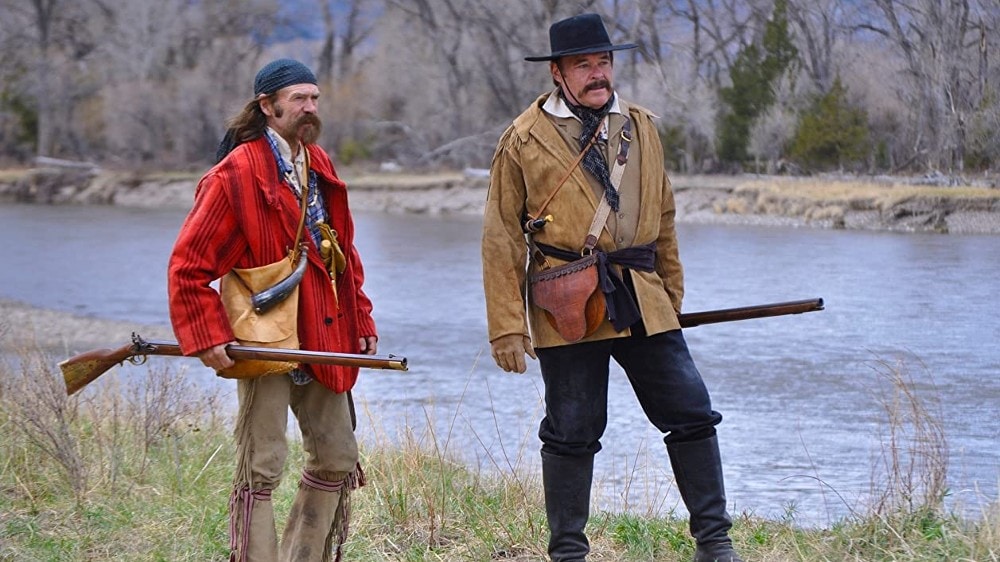 We’re kicking off our list with a series that still has yet to premiere: Into the Wild Frontier; the series hails from the INSP networks and is scheduled to debut on February 17, 2022!

Set during the expansion of American lands towards the west, Into the Wild Frontier follows three brave men, Daniel Boone, Jim Bridger, and John Colter, as they follow the call of new lands.

Their journey is not without its dangers and difficulties in the forms of unfamiliar forests and mountains, wild animals, unpredictable weather and of course, Native American opposition.

However, stories of their adventures inspire others to seek greener pastures in the west as well. 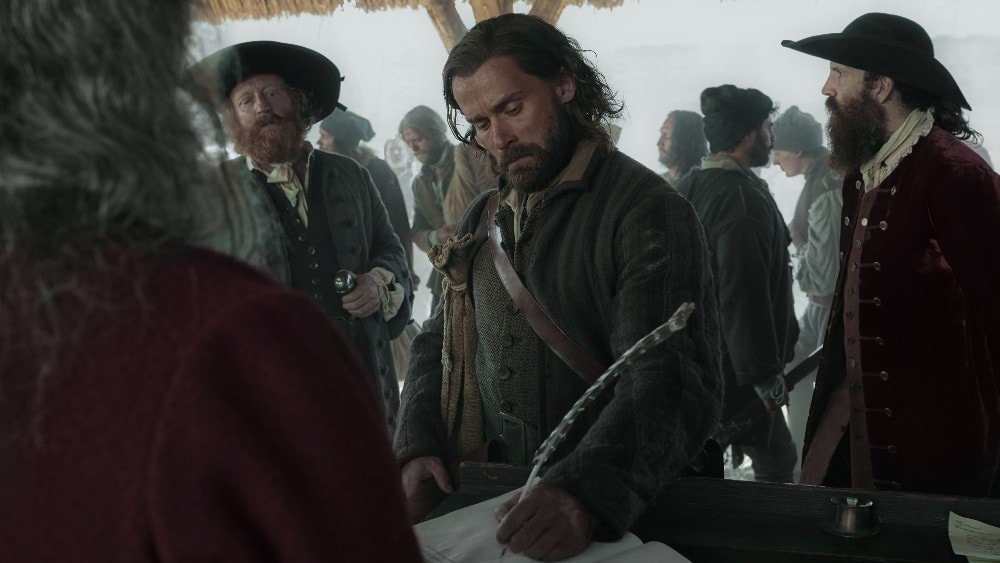 As a historical drama series, it makes sense for Barkskins to be hosted on the National Geographic network.

The series is based on the New York Times bestselling novel of the same name written by Pulitzer Prize-winning author Annie Proulx, though sadly it was canceled after just one season.

The title Barkskins is taken after the term for ‘indentured servants’, and references the jobs as woodcutters of the series’ two main characters: René Sel and Charles Duquet.

Sel and Duquet are immigrants to New France where they hope to seek a new life away from their past, amidst the laborious and brutal conditions of the New World. 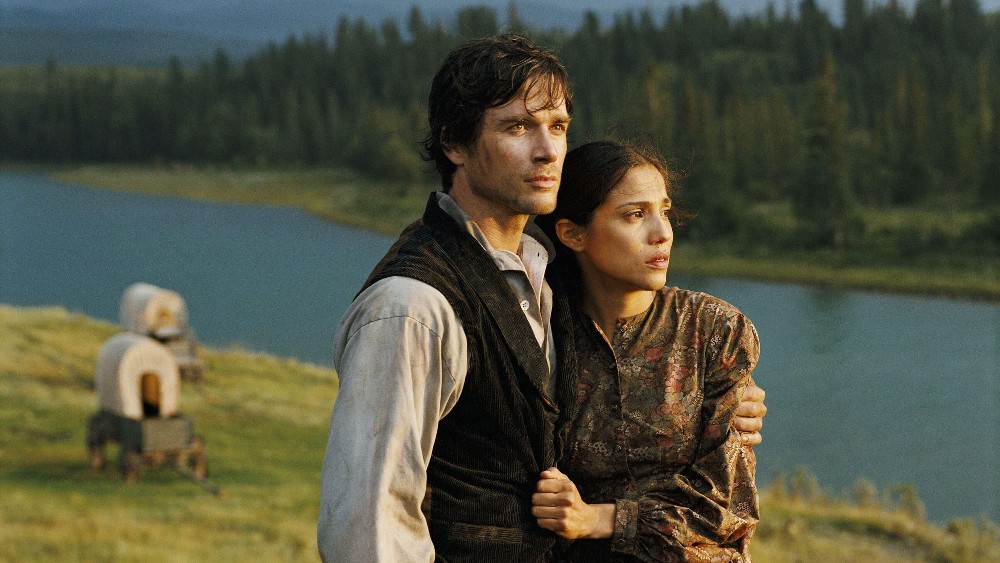 As with any historical event, it’s always vital to view it from all sides of the story; whether you stand on one side of it or are firmly in the middle, having all perspectives is necessary to see the bigger picture.

Into the West is a 2005 miniseries that provides that kind of viewpoint for its viewers across all six of its two-hour-long episodes.

Set during the American expansion between 1825 and 1890, the show is told through narration by its two central characters: Jacob Wheeler and Loved By The Buffalo.

Through dramatizations of real-life events and the appearance of some real and fictional historical figures, Into the West details the lives of two families caught in the whirlwind of the expansion. 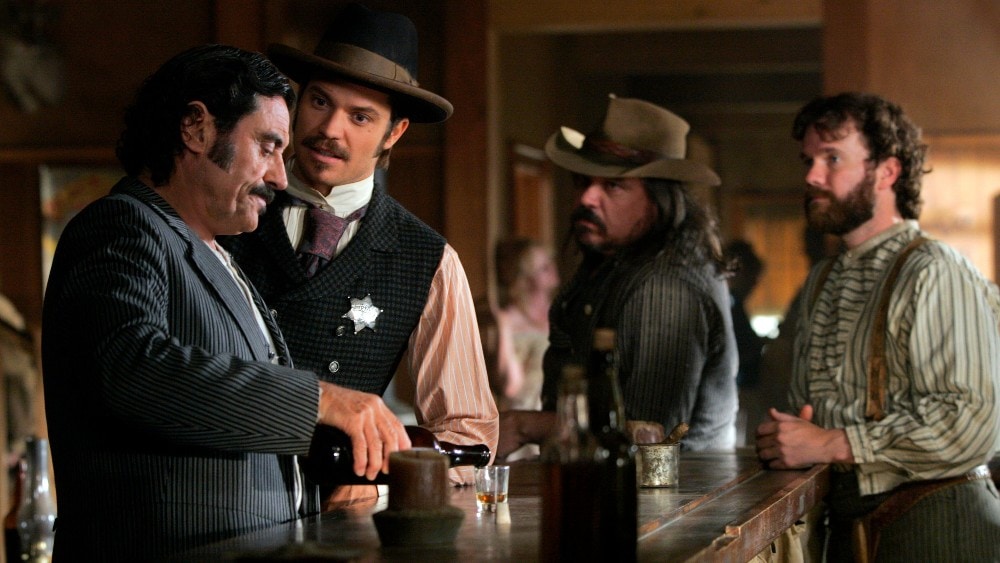 HBO’s Deadwood is another western period drama that borrows from real historical events and figures while mixing those with fictionalized elements as well.

The series’ title is a reference to Deadwood, South Dakota, where the series begins in the 1870s.

Back then, the area had yet to be annexed and after the huge Gold Rush jackpot in its Black Hills, the lawless mining town was suddenly a host to a slew of misfits and outlaws.

Among the real-life figures who featured prominently on the series were Al Swearengen, owner of a brothel, and Seth Bullock, a hardware store owner, and the town’s sheriff. 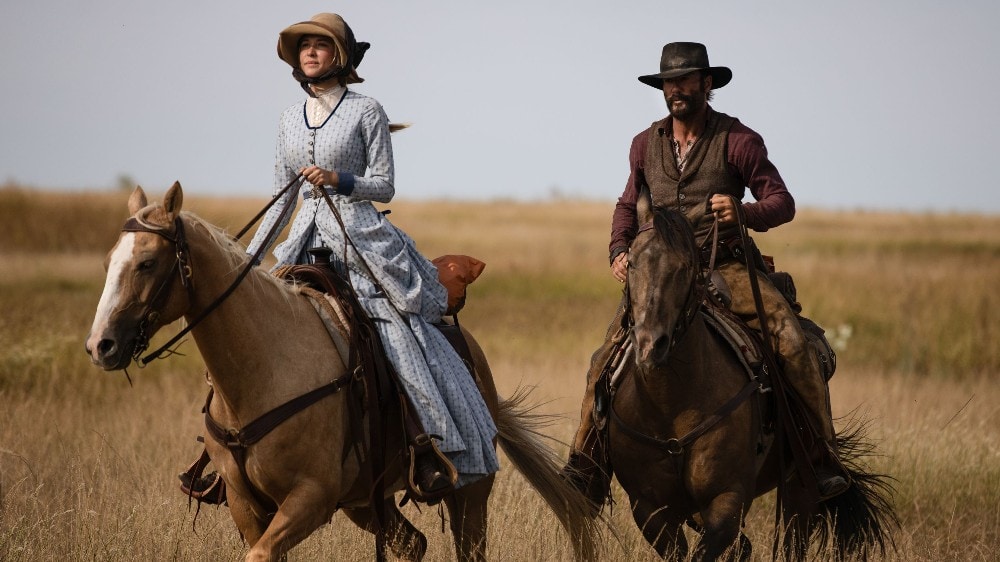 If you’ve seen or heard of Yellowstone, you’re going to want to watch Paramount’s 1883 as well.

1883 is the first spin-off of the popular western drama and serves as its prequel that traces the roots of the Dutton family as we’ve come to know them in Yellowstone.

In 1883, we meet James and Margaret Dutton, the great-grandparents of Yellowstone’s John Dutton, as they decide to join a group caravan that is headed across the Great Plains.

They, along with others in their group, are hoping to leave their hardships behind and start a new life in Montana. 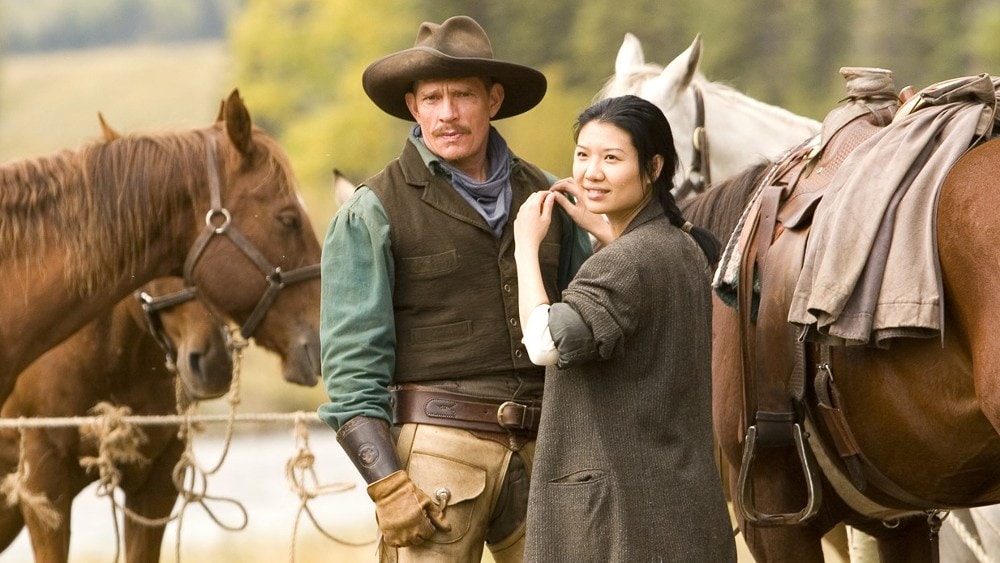 One thing many may not know about this period is that apart from the land expansion and emergence of boomtowns, one of the dangers of the Wild West included the trafficking of young women from the West Coast into lives of servitude and prostitution in the interior.

AMC’s Broken Trail tells a story of this through a narrative following Prent Ritter, a veteran cowboy, and his nephew Tom Harte.

The two men set off to transport and sell 500 horses to the British Army but when they come across a man with five Chinese women to sell off, they make it their mission to rescue the girls and bring them to safety. 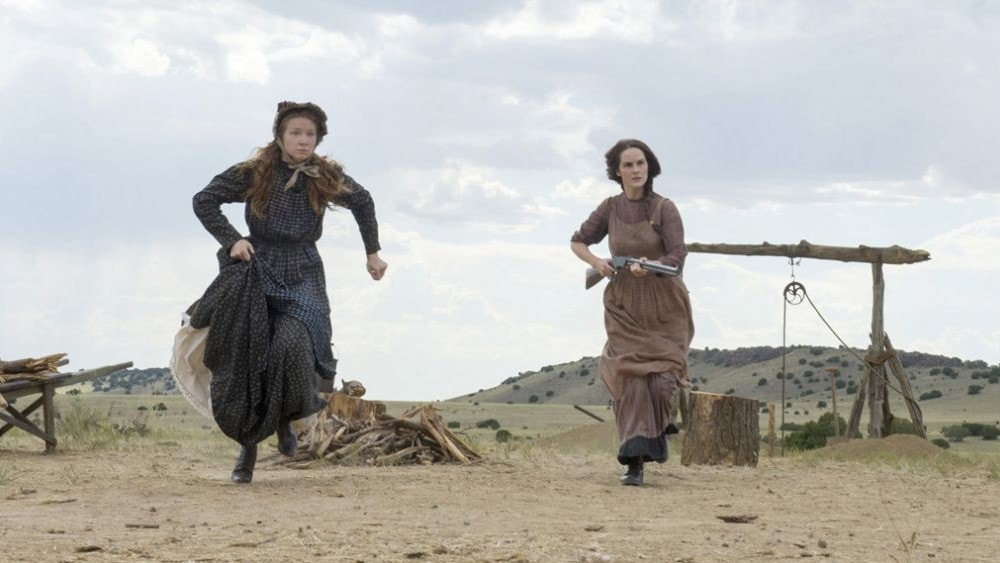 Here’s one thing you should probably never do to the gang you run with in the Wild West: betray them. That is unless you want to spend the rest of your life on the run and constantly looking over your shoulder.

Roy Goode, one of the main characters in Netflix’s western drama Godless does just that.

After being raised in the outlaw life by Frank Griffin, Roy grows tired of Frank’s tyrannical behavior and betrays him during a robbery.

He seeks asylum in La Belle, a small mining town in New Mexico that is mostly populated by women.

As Frank gets closer to their town to seek his revenge on Roy, the citizens come together to keep him and his gang at bay. 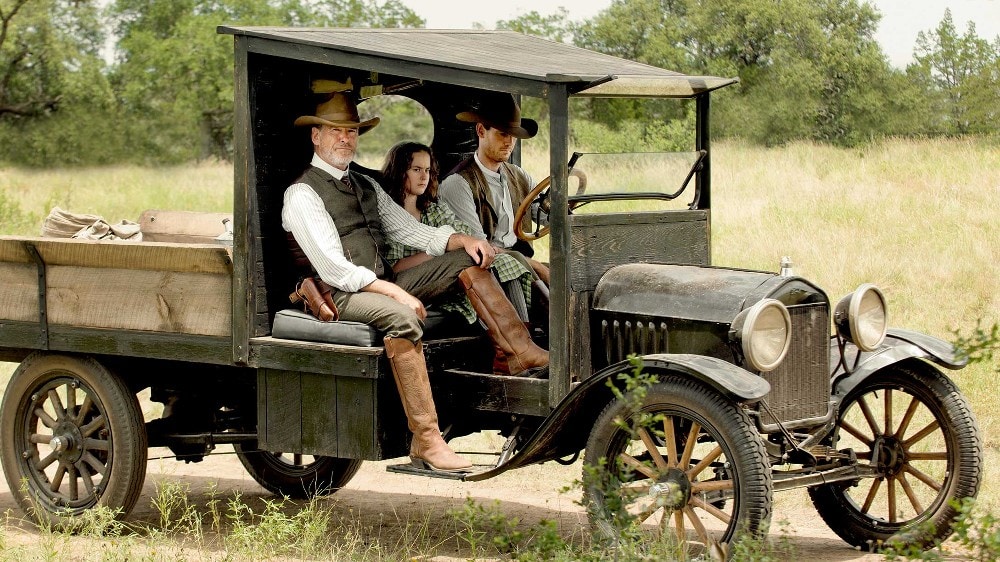 AMC brings another western drama to the list with The Son, which was based on Philipp Meyer’s novel of the same name written in 2013.

The series plays out over two timelines: the first begins in 1849 where we meet a young Eli McCullough, who has been orphaned and taken captive by the Comanche people.

As the timeline progresses, we watch him grow up and see how his youth influenced the man he is in the second timeline.

This occurs in 1915, where Eli is now a powerful cattle tycoon who’s looking to further expand his legacy into the oil business – at the risk of straining his relationship with his son. 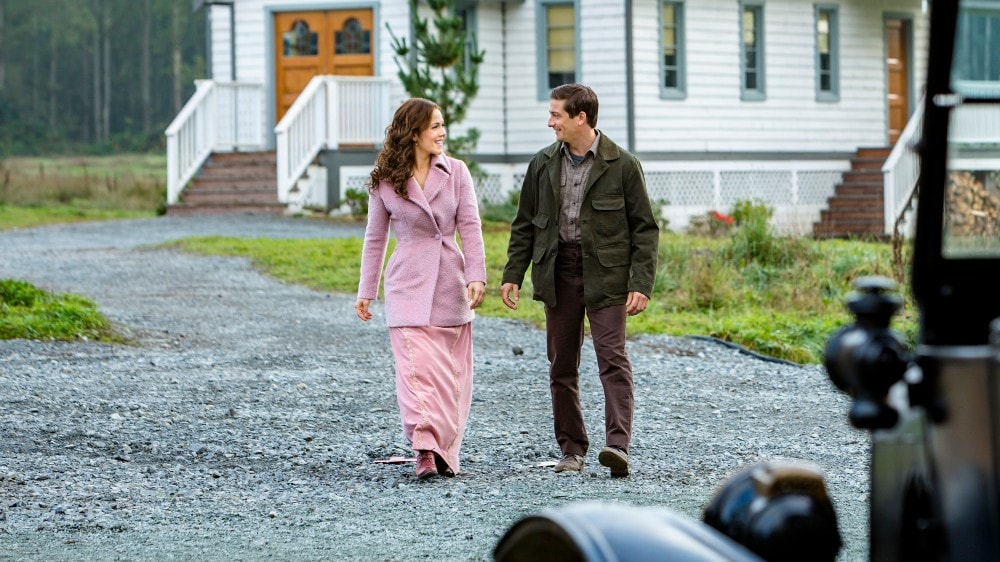 In our first Canadian frontier series, we’re also moving away from the rough edges of the previous shows and onto a lighter, more feel-good family drama.

When Calls the Heart follows Elizabeth Thatcher, a young teacher who grew up in the upper echelons of society but has been assigned to her first teaching post in a small mining town called Coal Valley.

Unaccustomed to a simpler way of life, Elizabeth experiences her fair share of difficulties at the start but is soon able to adjust and build a thriving life with new friends, her students, and even love. 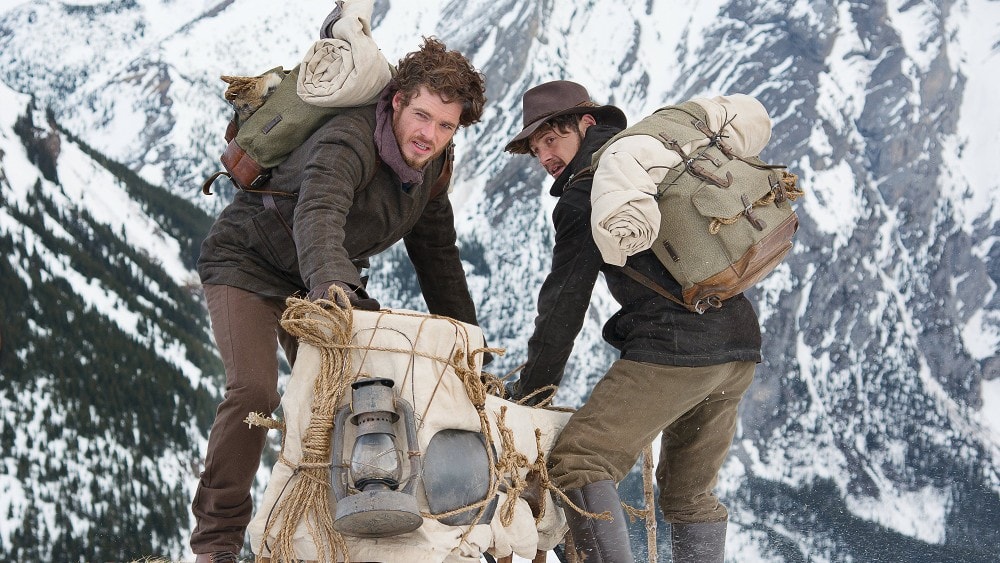 In Discovery Channel’s very first scripted series, we travel to Yukon in Northwestern Canada as the Klondike Gold Rush has taken off.

During this period, roughly 100,000 gold prospectors moved to the region in pursuit of the riches in gold that were found.

Based on Charlotte Gray’s novel Gold Diggers: Striking It Rich in the Klondike, the Klondike miniseries tells the story of two such migrants: young college graduate Bill Haskell and his friend Byron Epstein, who leave New York City for a small mining area in Dawson City, Yukon.

Not only do they need to battle against extreme weather conditions, but also against other individuals who are trying to strike it rich.

Best Docuseries About the Frontier 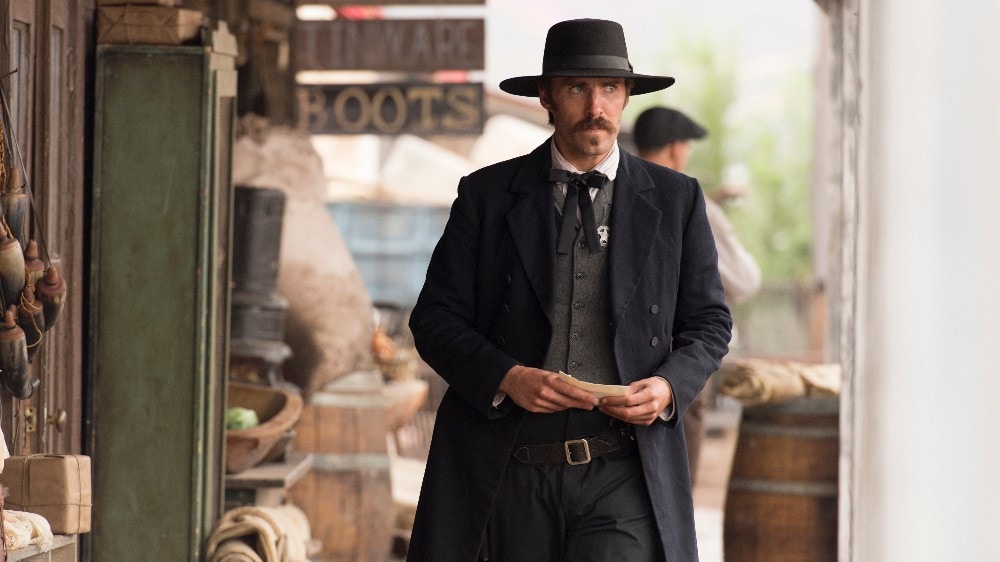 AMC not only has numerous scripted western shows under its belt, but it also brings an eight-episode docuseries to the table.

The American West takes us from 1865 through to 1890, in the period of expansion following the American Civil War.

As the country slowly becomes the ‘land of opportunity, its lands also become rife with dangers stemming from conflicts with outlaws, cowboys, Native Americans, and lawmen.

Each episode goes into some well- and other lesser-known stories from historical figures of that era like Billy the Kid, Jesse James, and Wyatt Earp. 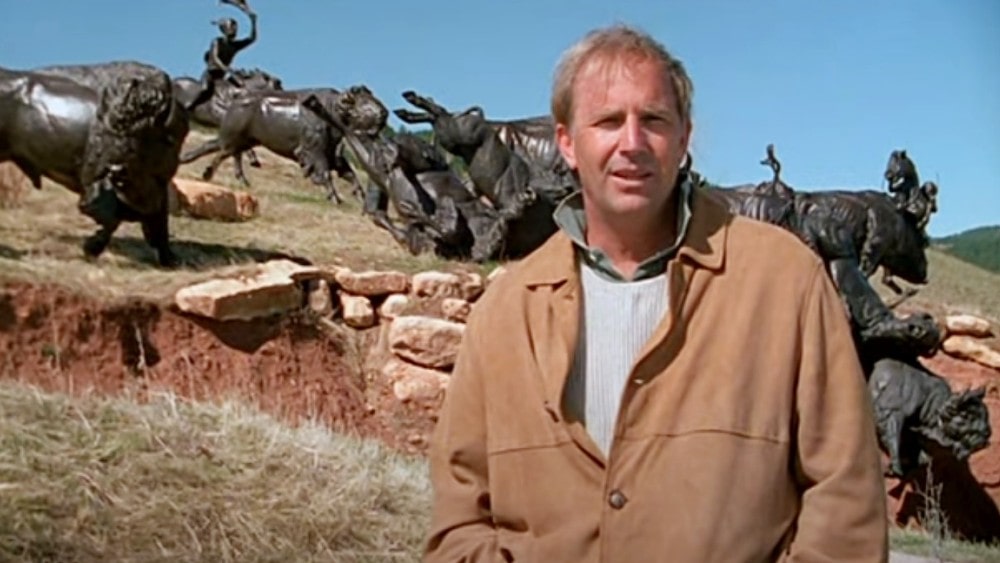 CBS’ eight-episode docuseries 500 Nations is based on Alvin M. Josephy Jr.’s 1994 book of the same name and is a truly fascinating look into the history and culture of Native Americans in North and Central America beginning from the pre-Columbian era.

Each episode takes us further through history while detailing how each nation was deeply affected by European colonization.

Some of the events covered in 500 Nations include the story of Powhatan princess Pocahontas, Pontiac’s War, and the devastating Trail of Tears. 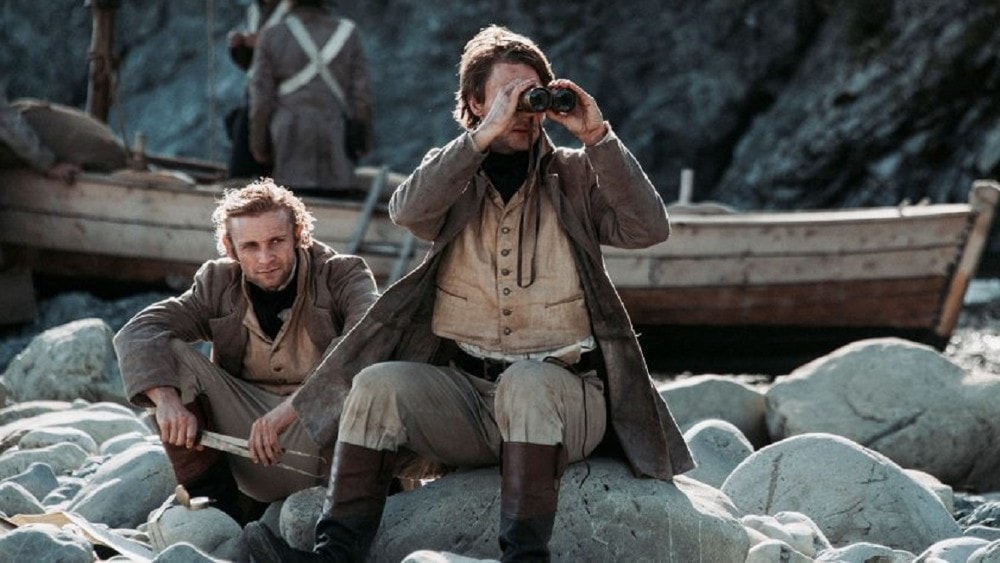 Formatted as a docudrama, the History Channel’s The Men Who Built America: Frontiersmen is a four-part miniseries that features dramatizations of real-life events from the “first 75 volatile years of the United States – from the Revolution through the California Gold Rush”.

Through each episode (just 6 hours in total), viewers follow the stories of many historical figures that helped shape the country.

Among these figures are pioneer Daniel Boone, the explorers Meriwether Lewis and William Clark, the Shawnee chief Tecumseh, and Davy Crockett, among others. 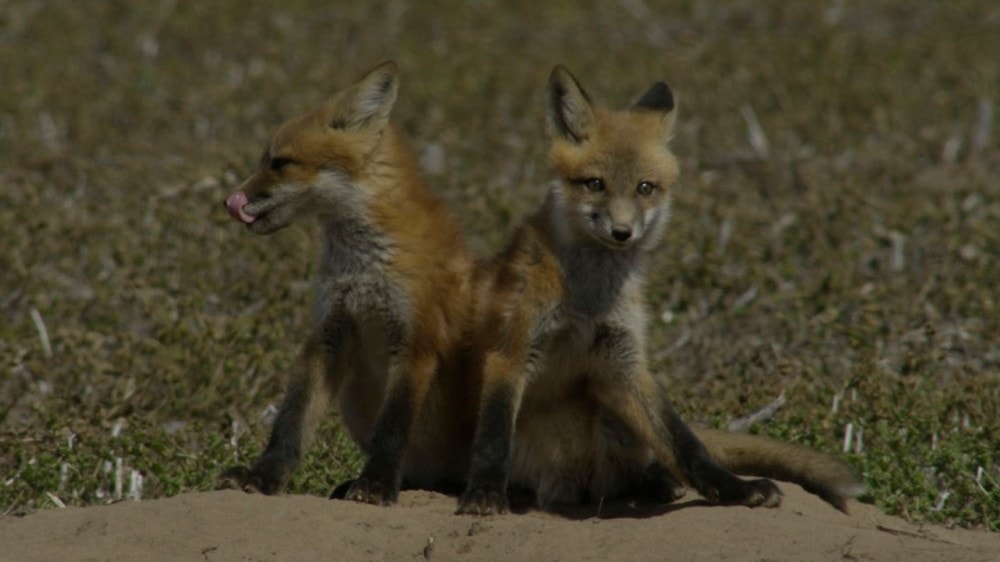 This National Geographic docuseries is the perfect show to end our list on because its content really sets it apart from all the others.

Where the previous shows told us history through stories, America the Beautiful: Wild Frontier is more of a visual adventure.

Yes, each of its five one-hour episodes provides a bit of history for context, but the shows dives more into the beauty of the American wild and wildlife.

Viewers are transported to different places throughout the show, and each comes with its own backstory, whether it’s where Davy Crockett lived or Wild Bill Hickok died.